The Florida Bar has opened an investigation into a U.S. congressman from Florida after it received a complaint about a taunting tweet he made hours before President Donald Trump’s former attorney, Michael Cohen, testified before a U.S. House committee.

Florida Rep. Matt Gaetz tweeted Tuesday without offering any evidence that the world is “about to learn a lot” about President Donald Trump’s former lawyer. Gaetz tweeted that Cohen should talk to his wife ahead of his testimony Wednesday. 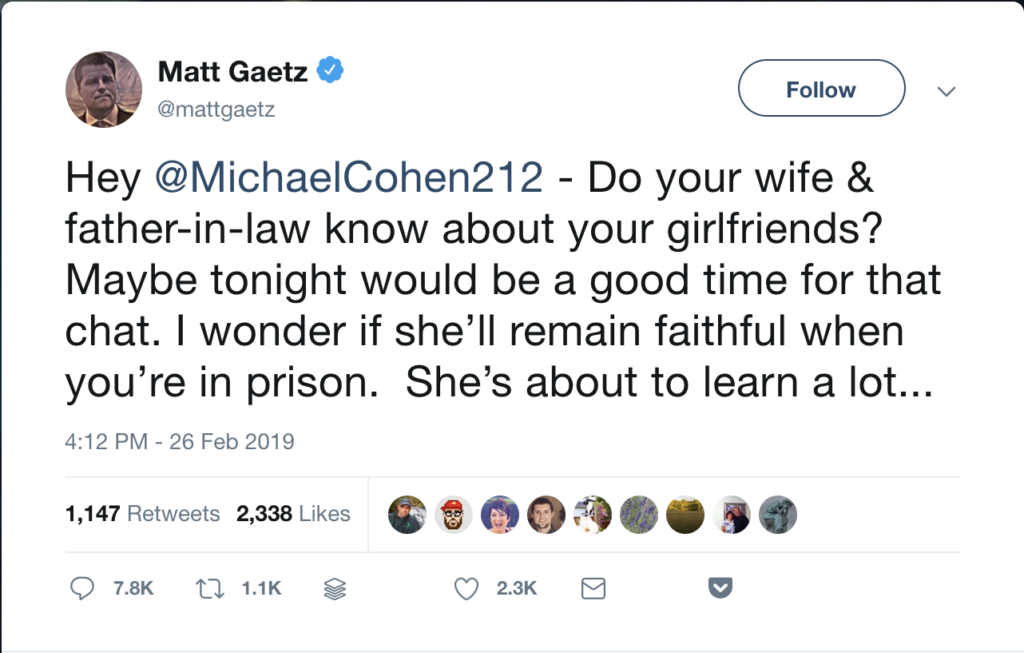 Florida Bar spokeswoman Francine Walker said in an email Wednesday that an investigation has been opened into Gaetz, but confidentiality rules prevent her from offering any further details.

Gaetz, who is a Florida Bar member, has 15 days to respond.

After an initial evaluation, the case is sent to a branch office and then a grievance committee, if Bar officials believe it has merit.

If the grievance committee finds probable cause, charges are filed with the Florida Supreme Court and then a judge is appointed to hear the case.

Gaetz apologized ahead of the House committee hearing Tuesday and said he did not intend to threaten Cohen.

Later Tuesday, after Democratic House Speaker Nancy Pelosi tweeted that House members’ social media comments could hurt the ability of House committees “to obtain truthful and complete information,” Gaetz tweeted that he also wanted to get the truth.

He says that it wasn’t his intention to threaten Cohen and that he was deleting the tweet and “should have chosen words that better showed my intent.”