Gun Control Advocates Lose ‘Round One’ 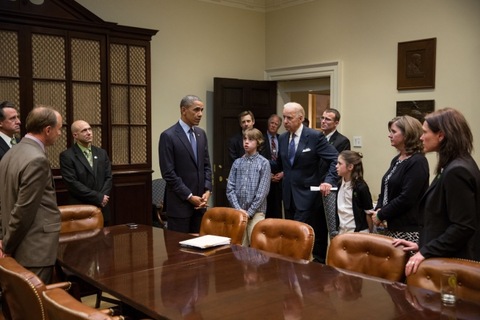 President Obama and Vice President Biden meet with families of victims killed in the Sandy Hook Elementary School shootings at the White House before delivering remarks on the Senate’s failure to pass a plan to expand background checks. Official White House photo by Pete Souza.

“So all in all, this was a pretty shameful day for Washington,” an incensed President Barack Obama declared Wednesday in the Rose Garden at the White House. He was flanked by families who have lost loved ones in mass shootings and former Arizona Rep. Gabrielle Giffords, who has become a leading figure in the gun control movement.

In a stinging setback for the president and advocates of tougher gun control measures, the U.S. Senate on Wednesday turned back proposals that would have expanded background checks for most gun sales, banned military-style assault weapons and limited the capacity of ammunition magazines.

The defeat of the provisions on assault weapons and magazines had been expected, but the prospects for enhancing background checks appeared to improve last week with the bipartisan compromise put forward by Sens. Joe Manchin, D-W.Va., and Pat Toomey, R-Pa.

The measure, designed to prevent violent criminals and the mentally ill from acquiring a firearm, would have required background checks at gun shows and for online sales. It ultimately failed to clear the 60-vote threshold needed for passage, with a final tally of 54 yeas and 46 nays.

In his remarks, Mr. Obama said the gun lobby had “willfully lied” about the bill by claiming it would create a national gun registry. But the president also blamed members of Congress on both sides of the aisle for succumbing to political pressure from the National Rifle Association and others.

“I talked to several of these senators over the past few weeks, and they’re all good people. I know all of them were shocked by tragedies like Newtown. And I also understand that they come from states that are strongly pro-gun,” Mr. Obama said.

“But the fact is most of these senators could not offer any good reason why we wouldn’t want to make it harder for criminals and those with severe mental illnesses to buy a gun. There were no coherent arguments as to why we wouldn’t do this. It came down to politics — the worry that that vocal minority of gun owners would come after them in future elections,” he added.

“And obviously, a lot of Republicans had that fear, but Democrats had that fear, too. And so they caved to the pressure, and they started looking for an excuse — any excuse — to vote ‘no,'” Mr. Obama said.

Watch the president’s event here or below:

The NRA welcomed the downfall of the Manchin-Toomey proposal. “This amendment would have criminalized certain private transfers of firearms between honest citizens, requiring lifelong friends, neighbors and some family members to get federal government permission to exercise a fundamental right or face prosecution,” NRA executive director Chris Cox said in a statement. “As we have noted previously, expanding background checks, at gun shows or elsewhere, will not reduce violent crime or keep our kids safe in their schools.”

It was evident from the start of the day Wednesday that the prospects of the Manchin-Toomey proposal had begun to fade, with a number of potential Republican “yes” votes lining up against the measure.

Manchin made a last-ditch plea with his colleagues to back the plan. “I understand that some of our colleagues believe that supporting this piece of legislation is risky politics,” he said on the Senate floor. “I think there’s a time in our life that’s a defining time in public service, a time when you have the ability to stand when you know the facts are on your side and walk into the lion’s den, and look that lion in the eye, and tell that lion, listen, not today, not today.”

But Manchin’s appeal was not enough, even with polls showing close to 90 percent of Americans favoring expanded background checks and with families of victims of gun violence watching the vote from the gallery above the Senate chamber.

Sen. Frank Lautenberg, D-N.J., absent from the chamber for health reasons for nearly two months, made a dramatic entrance in a wheelchair to cast his vote in favor of the amendment.

Vice President Joe Biden didn’t attempt to hide his disappointment as he read the final vote tally, and moments later, shouts of “Shame on you!” were heard coming from the gallery above the floor. The Washington Post’s Ed O’Keefe and Philip Rucker tracked down the women responsible for the outburst:

As police escorted them from the Capitol, Patricia Maisch and Lori Haas said they were angry. Maisch knocked a large ammunition magazine out of the hands of Jared Lee Loughner in January 2011 after he shot Giffords and other bystanders.

“They are an embarrassment to this country,” Maisch said as officers tried to remove her from the building. “I hate them,” she added of the senators.

Haas, whose daughter, Emily, was wounded in the 2007 Virginia Tech shootings, said: “We’re sick and tired of the death in this country, and these legislators stand up there and think it’s a bunch of numbers. .â€‰.â€‰. It’s a shame, it’s appalling, it’s disgusting.”

The emotion spilled over to the floor following the vote as well.

Sen. Dianne Feinstein, D-Calif., scolded her colleagues after they defeated the background checks measure and her own assault weapons ban renewal. “We’re here on six year terms for a reason — to take votes on difficult issues,” she said on the floor.

As Mr. Obama finished speaking, CNN reported Capitol Hill police had arrested a man for entering the grounds with a loaded handgun. He was there to protest the background checks bill.

A big question is how much energy, money and effort will gun control advocates expend to keep going on the issue. Their actions Wednesday suggest they are just warming up.

In an email sent moments after the vote, Giffords’ Americans for Responsible Solutions group used a one-word subject line: “Unthinkable.”

Giffords added to the emotional note Thursday with an op-ed in the New York Times, writing that she is “furious” and won’t give up.

Mr. Obama’s former campaign, now called Organizing for Action, pledged to keep it up. The White House pushed video of the president’s remarks to its official mailing list under the subject line “shameful.”

Joining the political threats was the liberal Progressive Change Campaign Committee, which promised it would be “holding accountable Democrats who voted against their constituents by running (newspaper) ads in their states, featuring some of the 23,000 gun owners who have joined our campaign for common sense gun reform.”

Up until the vote, the Democratic National Committee urged its backers to call wavering senators at their district offices.

Mr. Obama, himself, said he viewed Wednesday’s setback as just “round one” in a long-term fight, and he urged the public to remain involved in the effort. “To change Washington, you, the American people, are going to have to sustain some passion about this. And when necessary, you’ve got to send the right people to Washington. And that requires strength, and it requires persistence,” he said.

Mark Barden, whose son Daniel was one of the 26 killed at Sandy Hook Elementary School, spoke ahead of the president and pledged to the Newtown families that he would remain committed to the effort. “We are not defeated, and we will not be defeated. We are here now. We will always be here because we have no other choice. We are not going away,” he said.

Wednesday’s series of defeats left the path forward for gun control legislation uncertain, but some Democratic senators stressed the fight is not over.

Sen. Richard Blumenthal, D-Conn., who made gun control his central issue after last year’s massacre in Newtown, told Gwen Ifill on the NewsHour there is “no question that we’ll have more votes.”

National Shooting Sports Foundation Lawrence Keane told Gwen that he’d met with key Democrats on the issue and “that the discussion is not over, and we don’t believe the discussion should be over. The dialogue should continue.”

In one of its first major decisions of the term, the Supreme Court sided with foreign corporations in a case regarding human rights abuses.

Marcia Coyle of the National Law Journal outlined the court’s ruling, which hinged on the justices’ interpretation of one of the country’s oldest laws, the Alien Tort Statute. The first U.S. Congress made the law in 1789, a one-sentence statement that says U.S. courts can hear cases from foreigners regarding injuries committed in violation of U.S. treaties or the law of nations. It was meant to apply to situations involving safe conduct in the U.S., ambassadors and piracy. But in the past 30 years, human rights advocates have applied it to their interests.

The court’s decision is considered a loss for human rights groups that hoped U.S. courts could weigh on abuses committed in other countries — in this case, regarding oil companies in Nigeria.

The Supreme Court also issued a decision on a Fourth Amendment case involving law enforcement taking a sample of a man’s blood to prove he was driving under the influence. The state of Missouri had hoped the court would say that because blood alcohol content levels lessen rapidly over time, police wouldn’t need to seek a warrant to test a suspect’s level. Instead, it ruled in favor of the defendant, Tyler McNeely. Coyle walked us through that case when attorneys argued it in January. Tuesday’s ruling means in DUI situations, the time it takes for alcohol to lessen in a person’s blood isn’t reason enough for police to bypass getting a warrant for a blood test.

This was Coyle’s third segment on the NewsHour this week. On Monday, she discussed a case involving a company’s patent on the gene that can show a person’s risk of breast and ovarian cancer. And Tuesday, she spoke with Ray Suarez on a custody case involving the Indian Child Welfare Act and a little girl torn between adoptive parents and her biological father.

Next week marks the last opportunities for the high court to hear case arguments this term. We’re then expecting to see the biggest decisions of the year in late June.

On the NewsHour, WNYC’s Todd Zwillich explained to Hari Sreenivasan that the scare and evacuations of Senate office buildings added to already frayed nerves since the Boston bombings.

The NewsHour’s coverage is here, here and here.

Obama is using human props at his Gun Vote presser.

BREAKING: Citizens Committee for the Right to Keep and Bear Arms has withdrawn its support for Manchin/Toomey background check bill #guns

The mail to my home was diverted to the WH mail room and no WH mail got through for about a year.#2001