‘My Dad heard the call to action.’ Gwen Ifill on her father and Martin Luther King

Editor’s note: PBS NewsHour’s Gwen Ifill, who died November 14, 2016, wrote this column on August 26, 2011, on the anniversary of the March on Washington. Today, we’re resurfacing again it for the 50th anniversary of Martin Luther King Jr.’s death.

My daily commute takes me south along the Potomac River and past the neoclassical majesty of the Lincoln Memorial, a beautiful drive I try not to take for granted.

On this day, I was able to marvel at how it must have looked to Dr. King to see a quarter million people dressed in their Sunday best, gathered for the March on Washington.

But I had been living and working in the nation’s capital for more than two decades before I retraced the steps I had taken as a schoolchild, up the steps of the Lincoln Memorial.

It was steeper than I remembered. (It always is.) But when I reached the broad landing at the top, I glanced down, and to my surprise, discovered something there I had never noticed before — a shiny disc embedded in the floor that marked the spot where Martin Luther King Jr. delivered what came to be known as the “I Have A Dream” speech.

When I looked back up from the marble floor, I was able to gaze straight down the vista of the National Mall, which stretches past the reflecting pool and up to the U.S. Capitol. It’s a view I never tire of, whether gazing down from a plane, zipping by in a car or strolling by on foot. But on this day, I was also able to marvel at how it must have looked to Dr. King to see a quarter million people dressed in their Sunday best, gathered for the March on Washington. 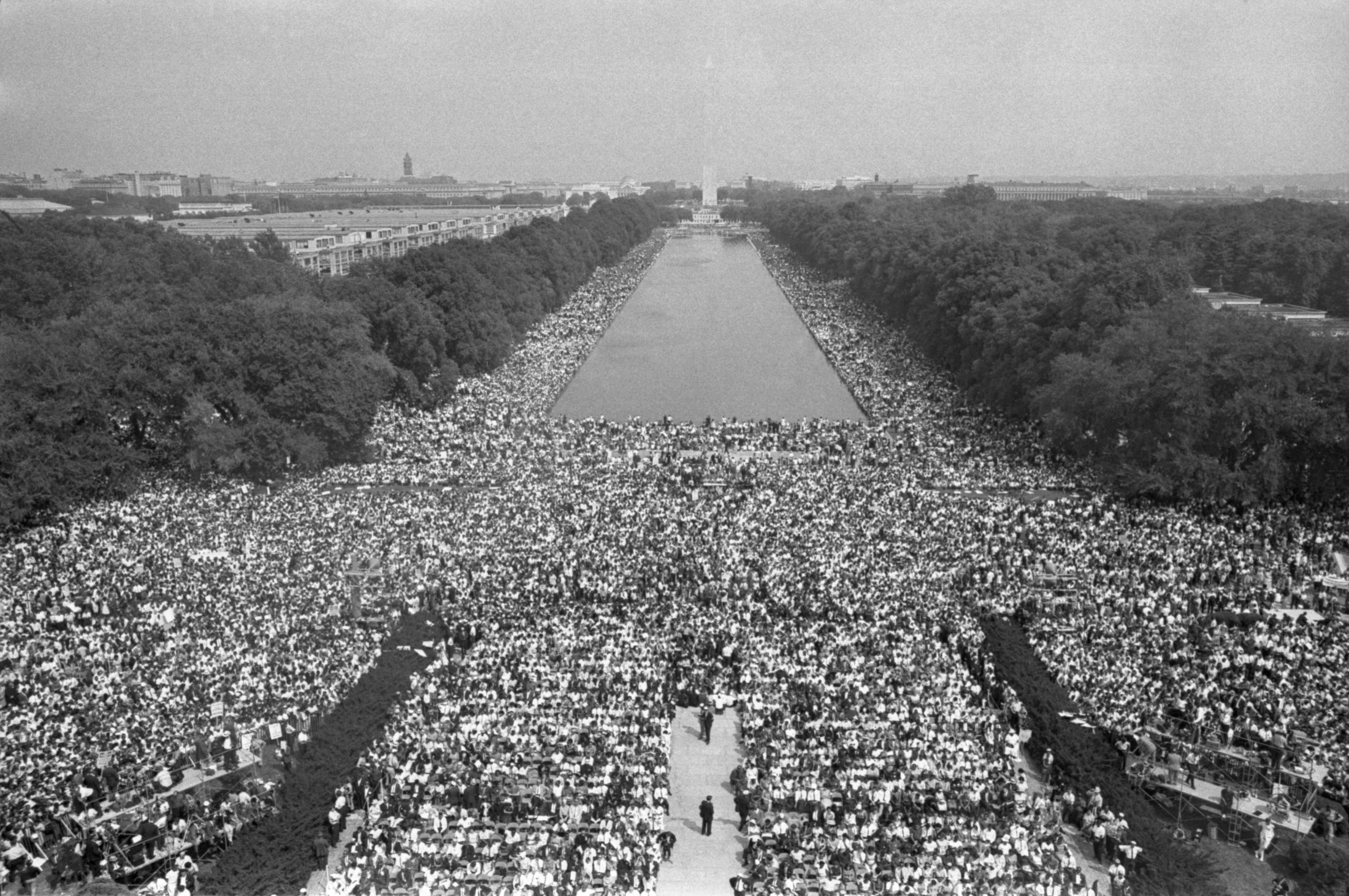 This photo, taken from the top of Lincoln Memorial, shows how March on Washington participants jammed the area in front of the memorial and on either side of the Reflecting Pool. Photo by Getty Images 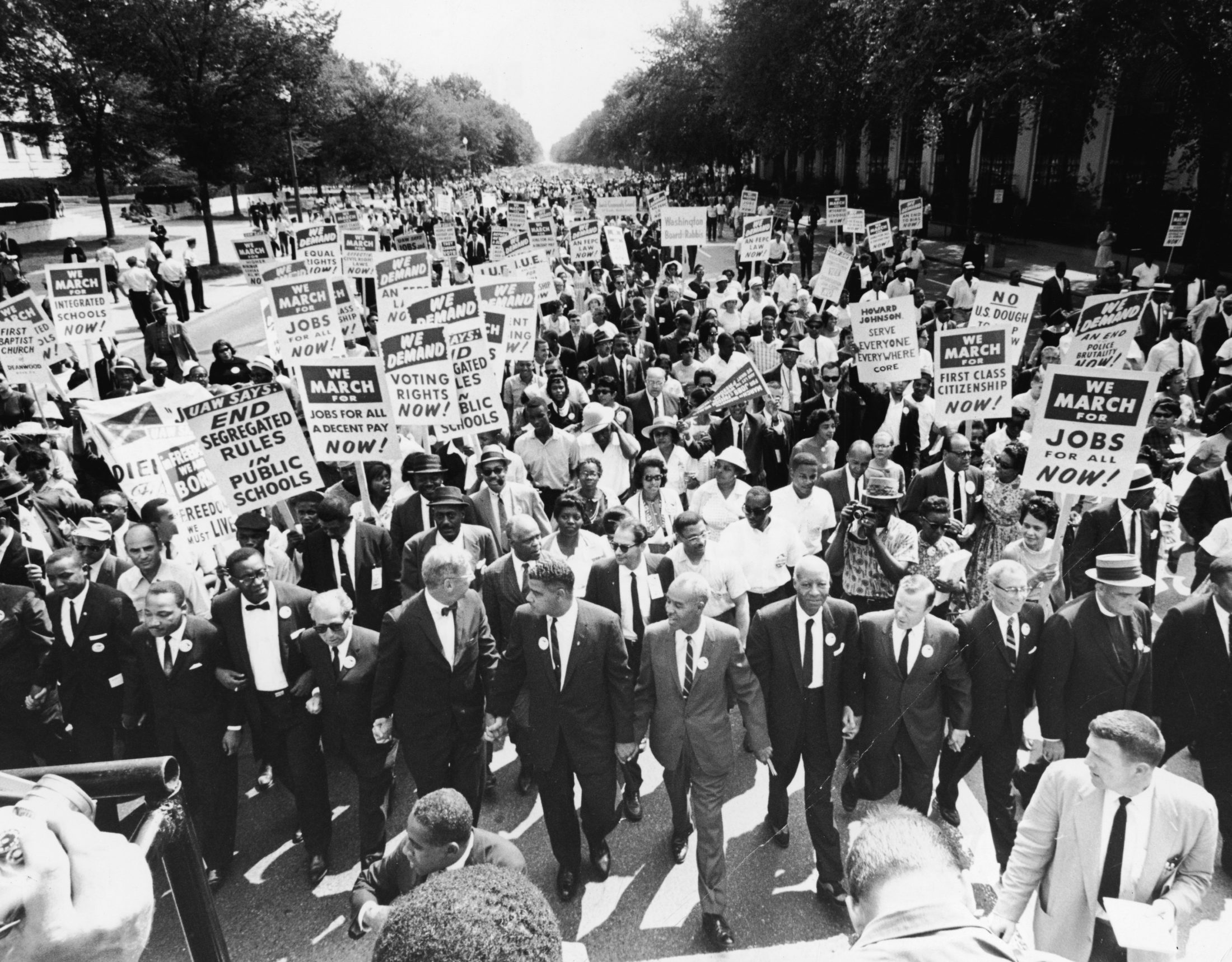 Civil rights Leaders hold hands as they lead a crowd of hundreds of thousands at the March on Washington in 1963. Those in attendance include (front row): James Meredith and Martin Luther King, Jr., left; (L-R) Roy Wilkins, A. Phillip Randolph and Walther Reuther. Photo by Hulton Archive/Getty Images

Somewhere in that sea of optimistic humanity on August 28, 1963 was my father, who had boarded a bus with a group of other African American preachers to be there for the event. My mother, siblings and I stayed behind in Buffalo, New York, but the events of the day swiftly became ingrained in our family’s collective conscience.

This was the sort of thing my father, a pastor in the African Methodist Episcopal church, loved to do. Where others heard only the humility and conciliation in Dr. King’s speeches and writings, my Dad heard the call to action. So that’s what his children heard too.

For years, I scanned the footage of that day, searching for a glimpse of my father marching along in his clerical collar. It doesn’t matter that I never saw him. The images still stick. They are invariably frozen in my mind in black and white. That may be appropriate, since so much of American history is defined by those opposites.

Before Hurricane Irene postponed it, my old NBC colleague Brian Williams and I were going to emcee the dedication ceremony of the King Memorial in Washington this weekend. I am of an age where my memory of the march is rooted more in the news coverage of the event than in experience. Mahalia Jackson singing. Bayard Rustin – the day’s organizer and overlooked hero – speaking. And, of course, Dr. King.

Over the years, the “Dream” speech has become one of the most selectively remembered addresses in history. Perhaps only the schoolchildren taught to dutifully recite it every January ever bother to listen to the entire address any more. But it’s worth a read. 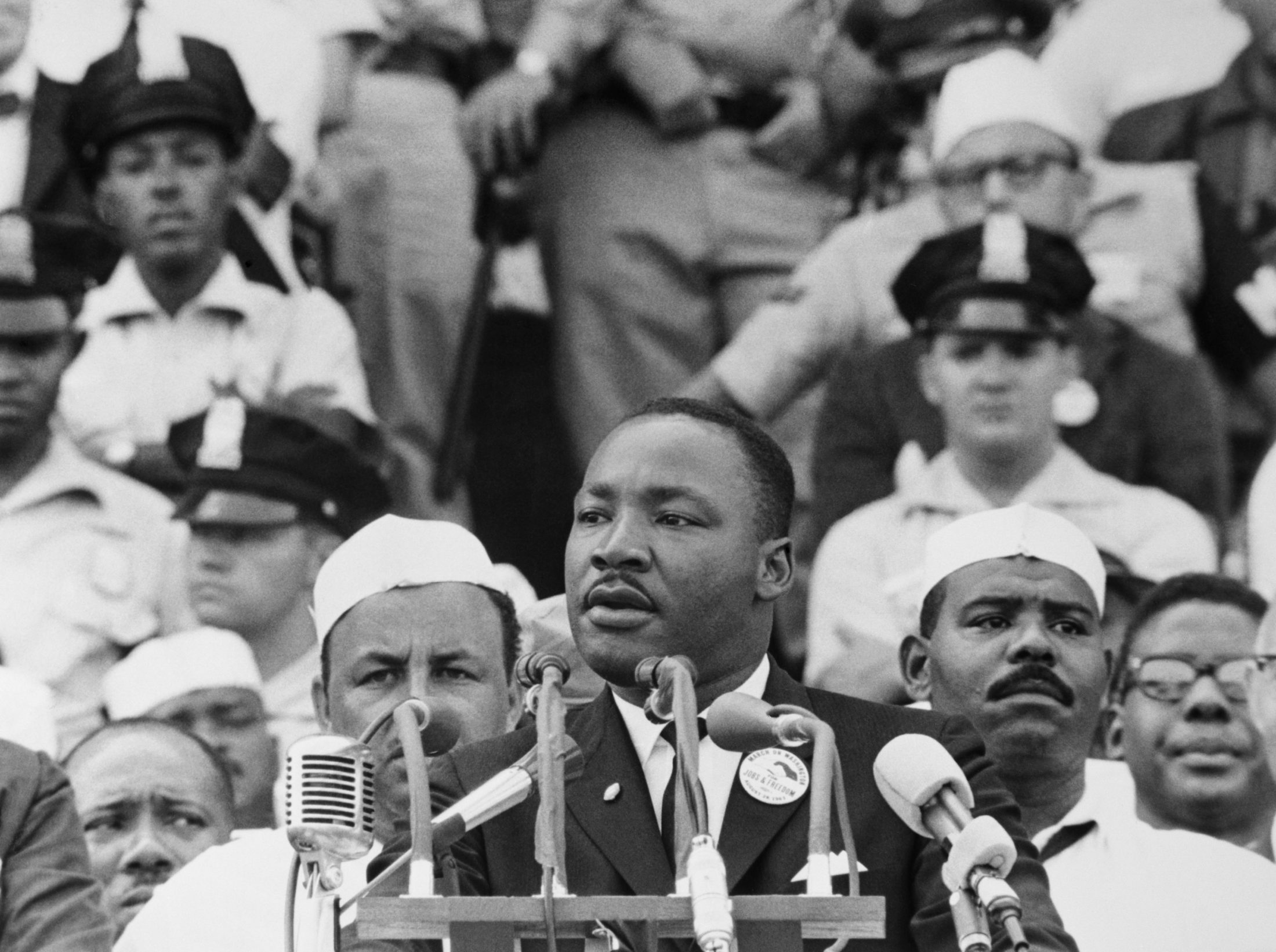 Martin Luther King Jr., gives his 1963 “I Have a Dream” speech to a crowd before the Lincoln Memorial. Photo by Getty Images

Dr. King, it should be noted, started off with a pretty harsh assessment of race relations 100 years after Lincoln signed the Emancipation Proclamation that freed the slaves.

“When the architects of our republic wrote the magnificent words of the Constitution and the Declaration of Independence, they were signing a promissory note to which every American was to fall heir,” he continued. “This note was a promise that all men, yes, black men as well as white men, would be guaranteed the “unalienable Rights” of “Life, Liberty and the pursuit of Happiness.” It is obvious today that America has defaulted on this promissory note, insofar as her citizens of color are concerned.”

But that’s not the portion of the speech most hear anymore. What we hear is the part where King turns from recounting injustice to preaching optimism, riffing on a theme he had developed in an earlier speech.

“I have a dream that my four little children will one day live in a nation where they will not be judged by the color of their skin but by the content of their character.”

The totality of King’s speech not only captures the times in which it was delivered. It also provides an eerie mirror image of the same debates that academics and pundits reargue today. When it comes to race relations, should we be pessimistic or optimistic? Is it more important to focus on how far we’ve come, or how far we have to go?

Earlier this year, I had the opportunity to act as a judge for a video, art and essay contest sponsored by the Martin Luther King Jr. Memorial called “Kids for King,” Schoolchildren were able to use their own voices to view King’s life and work through the prisms of their own experiences. It was enlightening.

Angie Miller of Sarasota, Florida, submitted artwork that depicted an explosion of flowers, along with the words “Life is Colorful.”

For years, I scanned the footage of that day, searching for a glimpse of my father marching along in his clerical collar.

Courtney McDonald of Levittown, Pennsylvania, wrote of the dream more broadly. “I have been treated unfairly because I look different, I like different things and because I am a girl,” she wrote. “Even though some people might be tall, short, skinny, fat, white, black, girl or boy, we are all still the same and we should be treated equally. His hope was to have everyone stop fighting, killing and treating each other poorly, just because people are different.”

Others celebrated the legacy through music and poetry. But, unlike their parents, who struggle through complicated arguments about whether America is now “post racial,” or whether King’s dream has been achieved, they focus on more straightforward lessons about equality and generosity.

Reading those submissions and rereading Dr. King’s words cheered me immensely. It reminded me that my father, a man of faith, raised children who could look back, and look forward, without getting confused.