Harris and Sanders set for 2020 showdown in delegate-rich California

SOUTH PASADENA, Calif. (AP) — Bernie Sanders has promised to win the California presidential primary in March, but home-state Sen. Kamala Harris is defending her turf — putting the two on a collision course in a state both see as a critical steppingstone to the White House.

Sanders’ campaign advisers rank California among what they call the crucial “first five” contests. By making a strong showing in those states — Iowa, New Hampshire, Nevada, South Carolina and California — they believe Sanders can establish himself as the dominant candidate in the crowded Democratic field by early March. He plans to roll out a major plank of his campaign — a proposal to combat climate change — in Northern California on Thursday.

Harris, meanwhile, has locked down endorsements from most of the state’s Democratic elected officials and recently announced having 10 paid staffers in California. Both candidates are in the state this week to address Democratic Party leaders in San Francisco.

But investing in California, the biggest prize in the presidential sweepstakes with 495 delegates, remains a gamble for both. It’s far from clear that the effort will be money well spent if the candidates don’t place near the top in the earlier states and if their campaigns are flagging by the time Californians start voting. (Mail-in ballots start going out Feb. 3 for the March 3 primary.) And in a state where most campaigning happens on the airwaves, having a grassroots network in San Francisco or Los Angeles may not save a candidate who is already sinking.

At this point, no other Democrats are betting on California like Harris and Sanders. Former Vice President Joe Biden has five staff members in the state, with several focused on fundraising. Massachusetts Sen. Elizabeth Warren has no paid staff but is building a robust volunteer corps. Sanders, a Vermont senator, has 11 staffers on his payroll.

The problem for candidates: “How do you budget for a California primary when you don’t know how you’ve done in the first four states?” asked longtime Democratic strategist Bill Carrick, who is based in Los Angeles.

“The first four states are incredibly consequential to who actually ends up a contender” in California, he said. 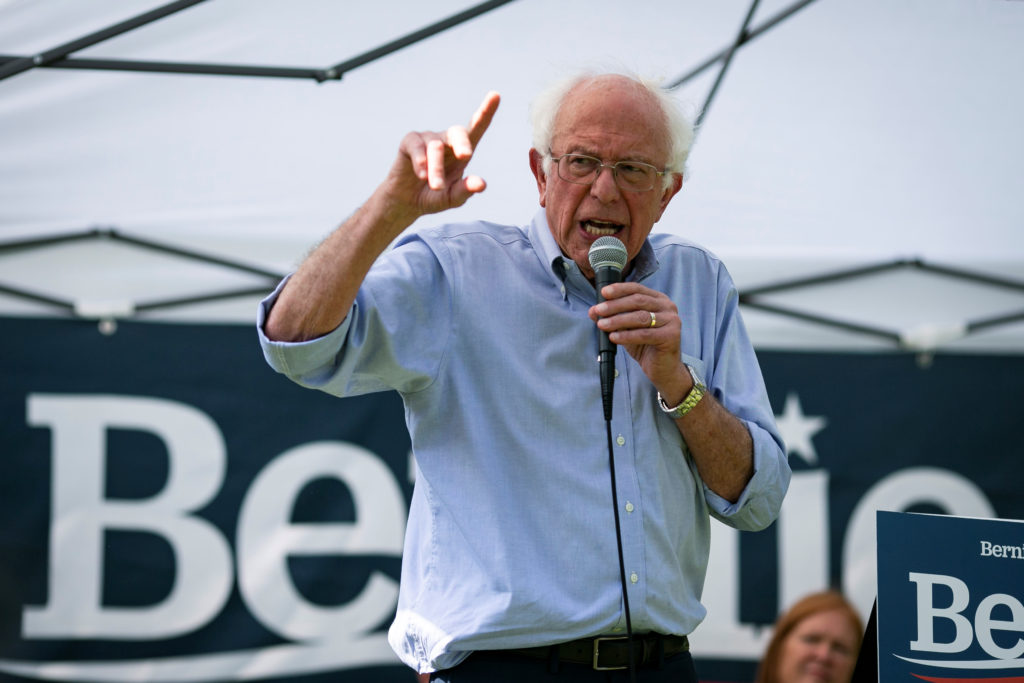 Still, Sanders’ campaign could spend $25 million or more chasing votes, a sign of his campaign’s commitment to the strategy. To manage the campaign in sprawling California, Sanders’ campaign has broken up the state into five regions and started to build organizations in those areas. The idea is to target places like the Los Angeles region and the San Francisco Bay Area as states within a state, honing in on local concerns. On a recent swing, he discussed immigration in San Diego, homelessness in Los Angeles and housing in San Francisco, where a typical one-bedroom apartment rents for $3,500.

In each area “we look at it like it’s Iowa, like it’s New Hampshire,” said campaign spokesman Joe Calvello.

Harris’ campaign is relying on lawmakers backing her candidacy to amplify her message in their home districts. They’re also helping raise money for her — she sent out a plea for donations Tuesday, warning that Sanders has raised $45 million this year and has a large grassroots organization returning from his 2016 presidential campaign.

Harris also benefits from a campaign team with a long winning record in California. The consulting firm running her campaign, SCRB Strategies, is led by longtime San Francisco political hand Ace Smith, who is well versed in the state’s diverse geographic areas and complicated delegate rules and has worked for Hillary Clinton and former California Gov. Jerry Brown.

Being California’s home-state senator is a benefit and a liability, said Brian Brokaw, a longtime Harris adviser who does not have a formal role with the campaign.

“It’s an opportunity in that it’s a state where she’s poised to do very well and has a strong base of support — and needs to do well,” Brokaw said. “But at the same time, we live in a world of finite resources and having to spend money in your home state typically isn’t at the top of any candidate’s priority list.”

Sanders and Harris present generational, gender and racial contrasts for voters. Sanders, 77, is white; Harris, 54, is the daughter of immigrants from India and Jamaica.

WATCH: How 2020 Democrats are striving to stand out in early states

But they aren’t necessarily chasing the same voters. Sanders is firmly anchored in the party’s liberal wing. But the shape of Harris’ coalition remains largely unknown, said Carrick.

“Is she going to try to take votes from Biden or Bernie or Warren?” he asked.

Sanders turned in a noteworthy second-place finish in California to eventual nominee Clinton in 2016, taking 46% of the vote and carrying 27 of 58 counties. For his army of veteran volunteers, the job has changed. They spent the last election introducing the self-described democratic socialist to voters.

The fight this time is for indecisive voters who are also giving a strong look to Harris, Warren and other candidates who share similar ideas.

In 2016, “People were like, ‘It’s Hillary. Who is Bernie?'” said volunteer Sanders organizer Melissa Michelson. But this time, she finds voters a bit confused with the array of choices.

In making a pitch to Democrats, “the response I get a lot is, ‘Waiting and seeing,'” Michelson said.

Despite residing in Los Angeles, Harris has held few public events in California since launching her campaign in Oakland. Instead, most of her visits have been for closed-door fundraisers.

But her campaign has been mobilizing volunteers through “Camp Kamala” training events in San Diego and Los Angeles.

With intense competition in a large field, Sanders appears to be aiming at a broader range of voters this time: He recently did a video interview with Grammy-winning rapper Cardi B.

Why Native populations are attracting new attention in 2020 presidential race