NEW YORK — Republicans who have spent the past decade howling about the danger of ballooning deficits embraced the coronavirus rescue package approved by Congress and signed by President Donald Trump, shrugging off past concerns about spending in the face of a public health crisis.

In many cases, the conservatives who backed the $2 trillion bill — the largest economic relief measure in U.S. history — were the very same who raged against the nearly $800 billion economic stimulus package backed by the Obama administration.

But facing the unprecedented threat of a global pandemic — and working under a Republican president who has largely brushed off concerns about debt and deficits — the GOP was willing to overlook an unprecedented flood of taxpayer spending. Leading budget hawk Sen. Pat Toomey, R-Pa., who insisted in 2009 that government cannot spend its way out of a recession, this week joined a unanimous Senate majority that approved what he described as “the biggest government intervention in the economy in the history of the world.”

“This is a response to an invasion,” he told reporters. “This is the kind of thing you’d have to do if we were at war.”

Like other conservatives, he noted that much of the nation’s current economic distress was caused by the government’s social distancing orders, while the Obama stimulus was in response to a crisis created by the private sector.

Failing to take dramatic action now, Toomey said, “would be a wildly imprudent thing, and it would probably result in such a severe recession — it might very well be a depression — and it could take decades to come out of this.”

Even before the health crisis struck, the Republican-aligned fiscal conservative movement had dramatically diminished under Trump, who has pushed the nation’s budget deficit to heights not seen in nearly a decade. That’s prompted arguments that the GOP is hypocritical when it comes to government spending.

Mick Mulvaney, Trump’s outgoing chief of staff and a former Republican congressman aligned with the tea party, told a private audience last month that the GOP only worries about deficits “when there is a Democrat in the White House,” according to a report in The Washington Post. 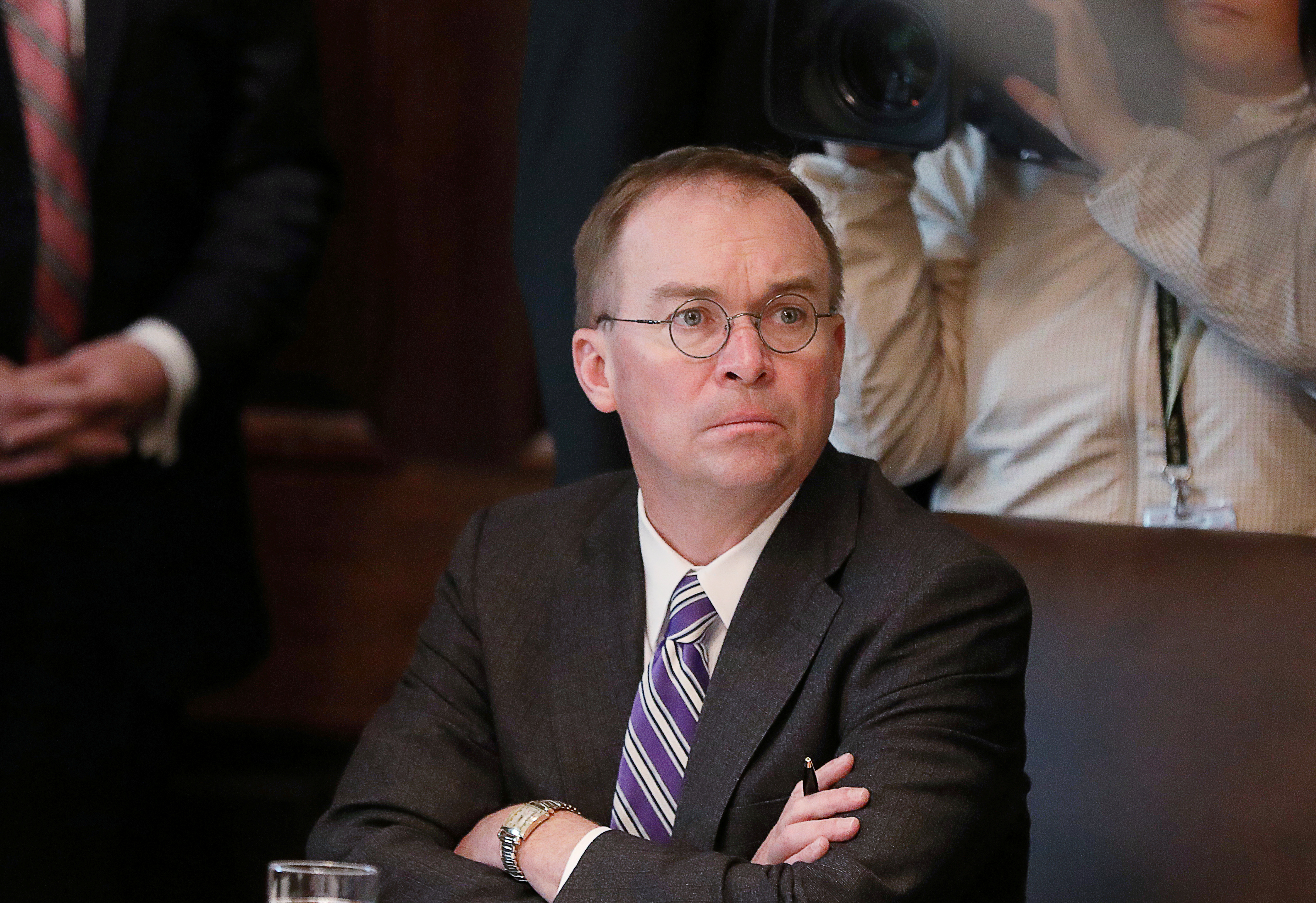 Acting White House chief of staff Mick Mulvaney listens during a Cabinet meeting held by President Donald Trump at the White House in Washington on Oct. 21, 2019. Photo by Leah Millis/Reuters.

For the first time in the modern era, Republicans are on record supporting direct cash payments to tens of millions of Americans — a government-backed measure more likely to be found in socialist countries. The legislation offers Americans grants of up to $1,200 each with an additional $500 for each child. Also in the bill: a massive expansion of unemployment benefits, $500 billion in loans to businesses and local governments, and tens of billions more for the airline industry, hospitals and food assistance.

David McIntosh, president of the Club for Growth, Washington’s preeminent fiscal conservative watchdog that Toomey previously led, raised the possibility that the coronavirus package could push this year’s budget deficit to $4 trillion. The largest annual deficit in U.S. history was $1.4 trillion in 2009.

“The spending is just outrageously high,” McIntosh said in an interview. “But on the short-term basis, we’re pleased.”

He opposed the direct payments to Americans but was satisfied that a significant portion of the taxpayer-funded package consists of loans likely to be repaid. He added that Congress rejected what he called the Democrats’ list of unrelated “political goodies.”

“Yes, it’s too much, and we’re worried about overall spending, but we recognize something has to be done,” McIntosh said. “That’s the kind of comment I’m hearing from conservatives who would normally oppose big spending bills.”

What remains of the tea party movement, which sprang up early in Barack Obama’s presidency to oppose government spending, has largely been silent. One major exception: Rep. Thomas Massie, R-Ky., who upset congressional leaders — and Trump himself — on Friday by unsuccessfully trying to force a formal House vote on the historic legislation.

Massie tweeted that the $2 trillion rescue package, in addition to an additional $4 trillion in stimulus from the Federal Reserve and Treasury Department, would create roughly $17,000 in new debt for every American citizen.

Trump, in a rare public rebuke against another Republican, punched back on Twitter: “Throw Massie out of the Republican Party.”

The Congressional Budget Office reported weeks before the coronavirus outbreak that the national debt was already on track to reach nearly 100% of the gross domestic product in just 10 years. The current package, and a subsequent round of government intervention already being discussed, will substantially escalate that timeline.

The budget office is not expected to release specific projections on the fiscal impact of the legislation until after it’s passed. Not including the rescue package, the current national debt exceeds $23.5 trillion, which is $3.5 trillion more than when Trump took office.

The coronavirus spending surge will put heightened pressure on lawmakers to cut the social safety net in the coming year, including Social Security and Medicare. Trump and leading Democratic rival Joe Biden have both promised not to touch the popular entitlement programs, yet they consume a disproportionate share of government spending.

“The future will be more painful,” said Maya MacGuineas, president of the Committee for a Responsible Federal Budget.

Still, she added: “This is definitely not the time to worry about the deficit. This is the time to be borrowing as much as we need to deal with the huge health crisis.”

Grover Norquist, one of Washington’s most notorious fiscal hawks, praised a series of temporary deregulations in the legislation that he hopes might permanently eliminate bureaucracy controlling such things as medical professionals’ ability to work in other states, the use of health savings accounts and liquor store deliveries.

He predicted that the rescue package could actually lead to a “more open society with more freedom.”

“There’s no permanent damage,” Norquist said. “On balance, it seems to have been the best you could do under the circumstances.”