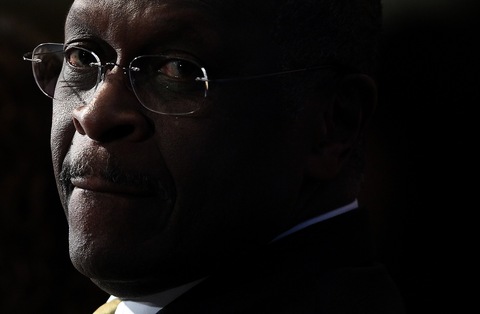 Herman Cain addresses the accusations of sexual harassment against him at the National Press Club on Monday. Photo by Win McNamee/Getty Images.

From the moment Politico broke the Herman Cain story on Sunday evening, it seemed inevitable that more facts and details would emerge about the claims of sexual harassment against the Republican presidential contender when he was CEO of the National Restaurant Association in the late 1990s.

And that’s not good for Cain. He had hoped to contain the story through multiple interviews and public appearances on Monday, including one on the PBS NewsHour and with a firm denial of any harassment and an accounting of his memory of the events that triggered one of the complaints against him.

Cain now enters the third consecutive day of this story, which is consuming his candidacy and the 2012 campaign at-large. And Cain’s schedule isn’t helping his cause. He’s scheduled to be in Washington, D.C., all week, where the political press corps can have relatively easy access to him, keeping those Klieg lights shining on him around the clock. Wednesday, he heads to Capitol Hill to discuss health care and his candidacy with GOP members of Congress.

It also isn’t helping that every time he speaks, he seems to have a new explanation or recollection.

The drip, drip on Wednesday comes in two parts from your major newspapers. The Washington Post reports that one of the women who filed a complaint against Cain is eager to be freed of her confidentiality agreement and to tell her story.

Joel P. Bennett, a lawyer representing one of two women who made the claims against Cain, said Tuesday that his client is barred from publicly relating her side because of a non-disclosure agreement she signed upon leaving the National Restaurant Association, where Cain served as president from 1996 through 1999.

Bennett is calling on the association to waive the agreement so the woman, a federal worker living in suburban Maryland, can rebut Cain’s statements this week that the allegations were false and baseless.

“It is just frustrating that Herman Cain is going around bad-mouthing the two complainants, and my client is blocked by a confidentiality agreement,” Bennett said in an interview. “The National Restaurant Association ought to release them and allow them to respond.”

Tuesday on Fox News, Cain declined to comment on whether the non-disclosure agreement should be lifted, saying he is consulting with a lawyer about the possible legal implications. In a statement, the restaurant association said that it had not been approached by Bennett but that it would “respond as appropriate.”

The New York Times is the first to report a dollar figure associated with one of the settlement agreements reached between the NRA and one of the female complainants against Cain.

The National Restaurant Association gave $35,000 — a year’s salary — in severance pay to a female staff member in the late 1990s after an encounter withHerman Cain, its chief executive at the time, made her uncomfortable working there, three people with direct knowledge of the payment said on Tuesday.

The woman was one of two whose accusations of sexual harassment by Mr. Cain, now a Republican candidate for president, led to paid severance agreements during his 1996-99 tenure at the association. Disclosure of the scale of the severance further challenged his initial description of the matter as a “witch hunt,” as did new descriptions from the woman’s friends and colleagues of her level of discomfort at work.

The Times also notes that the woman who received the $35,000 severance isn’t the woman whom Cain has mentioned being similar in height to his wife.

Simply put, Cain has not yet stopped the bleeding on this story. Some of that is in the candidate’s control. He clearly needs to employ more message discipline on this matter. Some of it, however, isn’t in his control, as at least one of the women seeks ways to tell her story publicly.

Two polls released in the past 24 hours show just how unsettled the 2012 presidential campaign is just one year from Election Day. But they also might reveal some clues about where we’re headed these next 12 months.

President Obama’s approval rating has climbed to 47 percent (up from 41 percent last month) in a new Quinnipiac University survey, but a Suffolk University poll in the key battleground state of Florida puts the president’s job approval at 41 percent.

On top of that, the Suffolk survey found the president’s hopes of winning the state would take a serious hit if the Republican nominee selected Florida Sen. Marco Rubio for the vice presidential spot on the party’s ticket. In that scenario, the GOP nominee would get 46 percent of the vote, compared to 41 percent for the president, with 12 percent of voters undecided.

(The president could flip the Sunshine State back in his favor by replacing Vice President Joe Biden with Secretary of State Hillary Clinton on the Democratic ticket. But while the suggestion may make for interesting chatter, it’s not a serious possibility.)

In the GOP field, the rise of Cain remains the story, as the Quinnipiac poll showed the former Godfather’s Pizza chief executive with 30 percent support, followed by Mitt Romney with 23 percent. (It’s worth noting, however, that since the survey concluded Monday, the results don’t reflect the impact of the aforementioned sexual harassment allegations.)

The only other Republican hopeful to score double-digit support in the Quinnipiac poll was Newt Gingrich with 10 percent. Texas Gov. Rick Perry stood at 8 percent.

The Florida results reflect a similar dynamic, with Romney at 25 percent, Cain at 24 percent, Gingrich at 11 percent and Perry at 9 percent.

Mirroring most other surveys, Romney also runs the most competitive race against President Obama nationally, according to Quinnipiac, trailing by five percentage points, 47-42. The other three candidates surveyed — Perry, Cain and Gingrich — all face at least 10-point deficits when matched up against the president.

So far at least, Republican voters seem unmoved by polls indicating that Romney gives the GOP the best chance of defeating Mr. Obama. Whether that trend holds will likely go a long way in determining who emerges as the Republican Party’s nominee next year.

The Arizona state Senate voted Tuesday to remove the chairwoman of the Arizona redistricting commission, throwing the process of redrawing the state’s congressional districts into chaos.

“I recognize that my decision will not be popular in some quarters,” Brewer said in a statement. “I certainly did not reach it lightly. However, the conduct of the I.R.C. [Independent Redistricting Commission] — led by Chairwoman Mathis — has created a cloud of suspicion that will not lift. A flawed redistricting process has resulted in a flawed product.”

Arizona voters decided in 2000 that a citizens’ commission of two Republicans, two Democrats and an independent chairman would draw political lines and that commissioners could be removed only for “substantial neglect of duty, gross misconduct in office or inability to discharge the duties of office.”

The governor accused Ms. Mathis, who is registered as an independent, of improperly conducting commission business out of public view and of skewing the redistricting process toward Democrats.

Paul Charlton, a former United States attorney who is representing Ms. Mathis, dismissed those accusations and said Ms. Brewer and other Republican politicians in the state were politicizing the process because they were frustrated that they could not control it.

A vote on the draft proposal by the panel had been expected later this month, but that action will likely be delayed as the legal wrangling over Mathis’ ouster plays out.