The testimony from Fiona Hill and another career diplomat concluded two weeks of public impeachment hearings by the House Intelligence Committee. Both Democrats and Republicans are digging in as the investigation shifts to the Judiciary Committee and a likely House vote on impeachment next month.

Acting Ukraine Ambassador Bill Taylor kicked off the public impeachment hearings last week by describing an “irregular channel” of communication with Ukraine that operated alongside an official foreign policy channel. Fionna Hill capped the House Intelligence Committee’s hearings Thursday with a damning confirmation of Taylor’s characterization of the process.

In one of the most memorable moments of the hearings, Hill drew a stark contrast between the work being done by career diplomats like Taylor and herself, and what was characterized as the shadow diplomacy carried out by EU Ambassador Gordon Sondland and Trump’s personal lawyer, Rudy Giuliani, among others.

The comment neatly summarized the Democrats’ arguments that Trump and his senior aides prioritized the president’s personal political concerns over U.S. foreign policy interests. But it was particularly compelling coming from Hill, who described herself in her opening statement as a “nonpartisan foreign policy expert.”

Hill debunks conspiracy theories that Ukraine meddled in the 2016 election

House Republicans spent a considerable amount of time in the impeachment hearings claiming that Trump’s concern with Ukraine was justified because the country interfered in the 2016 U.S. presidential election. Democrats pushed back on the conspiracy theories, which have been promoted heavily by Giuliani. Several witnesses also said they believed there was no evidence to support the claims.

But Hill delivered arguably the strongest rebuttal Thursday. In a pointed opening statement, Hill criticized Republicans for peddling theories about Ukrainian interference while ignoring the U.S. intelligence community’s conclusion that Russia meddled in the election to help Trump win.

“This is a fictional narrative that has been perpetrated and propagated by the Russian security services themselves,” Hill said. She added later on, “I refuse to be part of an effort to legitimize an alternate narrative that the Ukrainian government is a U.S. adversary, and that Ukraine — not Russia — attacked us in 2016. 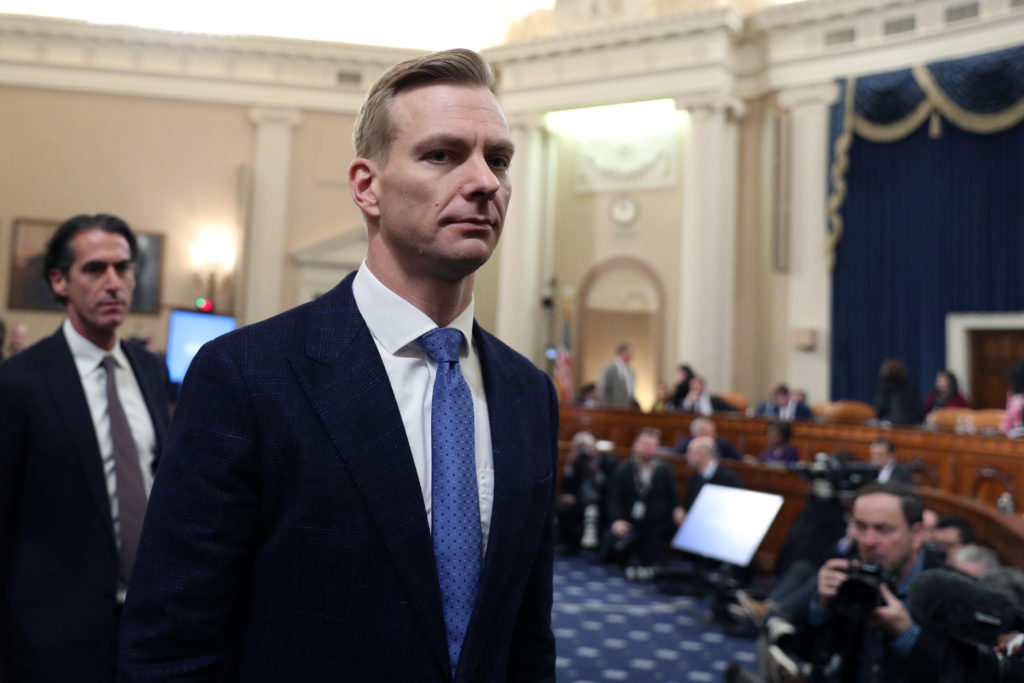 David Holmes, political counselor at the U.S Embassy in Kiev, leaves during a recess break at the impeachment hearing on Capitol Hill on November 21, 2019. REUTERS/Loren Elliott

It was a stunning rebuke to Republicans — and by extension to Trump– who has been following the hearings closely and has long viewed Russia’s election meddling as undercutting his 2016 victory.

Hill also issued a chilling warning about Russia’s intentions to interfere in the U.S. presidential election next year. “Right now, Russia’s security services and their proxies have geared up to repeat their interference in the 2020 election,” Hill said. “We are running out of time to stop them.”

Sondland claimed in his deposition and public testimony on Wednesday that he did not immediately make the connection between the Bidens and the Ukrainian energy company, Burisma. He said it took him months to understand the investigations into Burisma that Giuliani was pushing for, also meant looking into former Vice President Joe Biden and his son, Hunter, who served on the board of Burisma.

“Is it credible to you that Mr. Sondland was completely in the dark all summer?” Maloney asked.

“It’s not credible to me that he was oblivious,” Hill answered.

Hill’s response reinforced the Democrats’ skepticism that Sondland told the truth. Kurt Volker, the former special envoy to Ukraine, also testified under oath that he was slow to recognize the Burisma-Biden connection, though he admitted regretting his failure to do so.

For Democrats, David Holmes’ first-person account, relayed during his testimony Thursday, of Sondland’s July 26 call with Trump, is a key piece of evidence that the president withheld military aid from Ukraine in exchange for seeking an investigation into the Bidens.

Holmes, a top diplomat at the U.S. embassy in Kiev, testified that on the call — which took place at a restaurant in Kiev just one day after Trump spoke with Ukrainian President Volodymyr Zelensky — Trump asked Sondland if Ukraine was moving forward with “the investigation.” Holmes also said that after he hung up, Sondland told him Trump did not “give a shit” about Ukraine, and only cared about the “big stuff” that benefited him personally, especially the probe into the Bidens.

The testimony put Trump at the very center of the controversy. But Republicans were effective in raising doubts about whether or not Holmes overheard the conversation accurately, and why his boss, Taylor, waited to disclose the call until after the impeachment hearings began. Holmes defended his recollection, but his testimony left some gray area that Republicans were able to exploit.

Perhaps most interestingly, no Republicans took issue with Sondland’s characterization that Trump did not care about Ukraine — though they argued that Trump ultimately approved the military aid, which included lethal weapons the Obama administration opposed sending to Ukraine. Holmes said Trump’s complete disinterest in Ukraine was his “main takeaway from the call.” No Republicans stepped forward to defend the president.

After five days of hearings, both sides are dug in

The hearing Thursday concluded five days of public testimony. The action will now shift to the House Judiciary Committee, which is responsible for drawing up articles of impeachment. In an impassioned closing statement, House Intelligence Chairman Adam Schiff, D-Calif., asked lawmakers to consult their conscience in determining whether Trump should be impeached.

But the position of both parties is already clear, and has been from the start. Democrats think Trump violated the public trust and should be impeached. Republicans do not. Rep. Will Hurd, R-Texas, who is retiring from Congress, came the closest of any Republican in the hearings to condemning Trump’s request for Ukraine to investigate the Bidens.

Trump’s July 25 conversation with Zelensky was “inappropriate, misguided policy. It’s certainly not how the executive, current or future, should handle such a call,” Hurd said.

That comment was critical. But it was far from a sign that Hurd — or any Republican in Congress — is prepared to vote to remove Trump from office.

Left: Fiona Hill, former senior director for Europe and Russia on the National Security Council, takes her seat to testify as part of the impeachment inquiry into President Donald Trump, on Capitol Hill on November 21, 2019. REUTERS/Loren Elliott