With race and policing now at the forefront of the 2020 election, some Democrats are making the case that former Vice President Joe Biden could benefit from picking a running mate who has experience working in the criminal justice system.

The push has centered on Sen. Kamala Harris of California and Rep. Val Demings of Florida, the only two candidates on Biden’s reported short list who have law enforcement experience.

Harris’ time as a prosecutor and state attorney general was a liability during her failed White House bid last year, hurting her with younger, more progressive voters. And under the national spotlight, Demings is facing fresh scrutiny for her stint as Orlando’s first female police chief.

Still, several Democratic lawmakers, law enforcement officials and others say having a running mate with law enforcement background could help Biden win over some of the moderate voters he needs to beat President Donald Trump.

Unlike many younger progressive activists, older, more moderate Democrats — among them older Black voters — are typically more inclined to see having a law enforcement background as a positive, Lester said. And, he said, “they’re much more likely to vote than the young people talking about ‘defund the police.’”

Harris and Demings “know the system and really can speak to it in a way that has some depth,” said Nick Akerman, a former federal prosecutor. Both would bring instant authority to any conversation about criminal justice issues, Ackerman and others argued.

“Someone who is calling for structural change in the criminal system who was also part of it speaks with some credibility,” said Chiraag Bains, the director of legal strategies for the liberal group Demos.

Others argued that while Harris and Demings have both been out of law enforcement for years, their commitment to structural change in policing would always be questioned given their time spent working within a system that does not embrace reform.

Harris’ tenure as an elected prosecutor and attorney general put her in a “very difficult spot” to push for reform, said William Yeomans, an attorney in the Department of Justice from 1981 to 2005.

“You can only go so far as someone who wants to change the system from inside if you’re directly accountable to people who can throw you out of office,” Yeomans said. 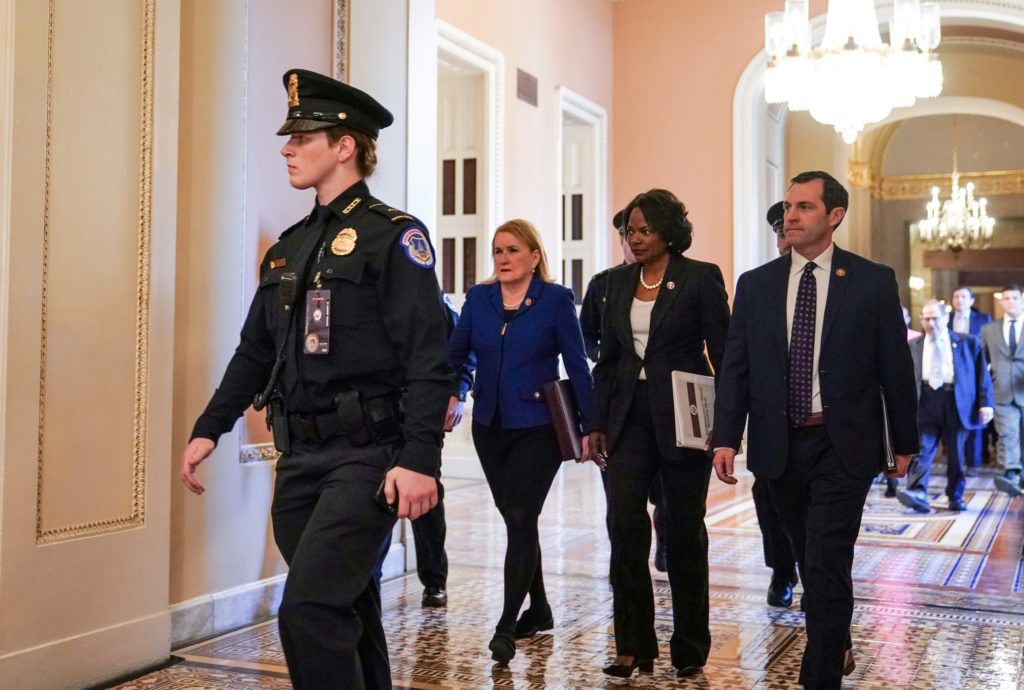 Rep. Val Demings, center, rose to national prominence after she was named as a House impeachment manager in the Senate trial of President Donald Trump. File photo by REUTERS/Sarah Silbiger

Demings faced a different set of pressures working her way up through a police department, said Yeomans, who also served as acting U.S. attorney general for the Justice Department’s Civil Rights Division in 2001. Career police officers are often “imbued with the values of the institution,” he said. “That’s a given, and that comes with tradeoffs.”

Both Harris and Demings made necessary compromises to get ahead in their careers as Black women in law enforcement that now make it harder for them to call themselves true reformers, said Mary Frances Berry, a former chair of the United States Commission on Civil Rights.

“If you’re Black, you have to do certain things in order to get ahead — in order for people in power to trust you and give you responsibility,” said Berry, a historian at the University of Pennsylvania.

Biden said earlier this year that he would announce his choice of running mate by Aug. 1. At a recent news conference the former vice president would not commit to that date, but said the choice would be made early next month, ahead of the Democratic National Convention in mid-August.

As that date nears, the debate over Harris and Demings has intensified in the wake of the protests over racial injustice following the police killings of George Floyd and several other Black Americans.

Polls show a growing number of Americans believe police officers are more likely to use excessive force against Black people than they are against white. A Monmouth University survey last month found that a majority of Americans — including a majority of white Americans — think the protesters’ anger is justified.

Nearly 60 percent of those surveyed in a recent Politico/Morning Consult poll said police departments need major reform — but when it comes to what exactly that looks like, respondents were more divided. The moment has forced Harris and Demings to walk a fine line as they call for police reform while also demonstrating why they would make a good running mate for Biden.

Demings’ appointment as a House impeachment manager in the Senate trial of President Donald Trump turned her into a national figure. Allies pushing her as a smart choice for Biden’s running mate point to her compelling backstory as a trailblazer in Florida and argue she could help Democrats carry the swing state by driving up turnout along the all-important I-4 corridor, which runs through Demings’ congressional district in Orlando.

“If Biden can win Florida, it’s game over. The I-4 corridor is a critical aspect of being able to win Florida, and that’s her home base,” Orlando Mayor Buddy Dyer, who appointed Demings as police chief, said in an interview.

Harris supporters contend her presidential campaign, though shaky at times, helped raise her national profile and cemented her place as a rising Democratic star. At 55, Harris is younger than the 63-year-old Demings, a factor in her favor given many Democrats’ desire to see Biden select a younger running mate. He is 77 years old and would be the oldest president ever to take office.

Biden pledged in March to pick a woman as his running mate, and he has come under more pressure to select a woman of color since Floyd’s death in May.

In addition to Harris and Demings, the other leading contenders include Susan Rice, a former national security adviser, and Atlanta Mayor Keisha Lance Bottoms, both of whom are Black. Sen. Elizabeth Warren of Massachusetts is also rumored to be a leading candidate, and is the lone white woman among the top contenders. 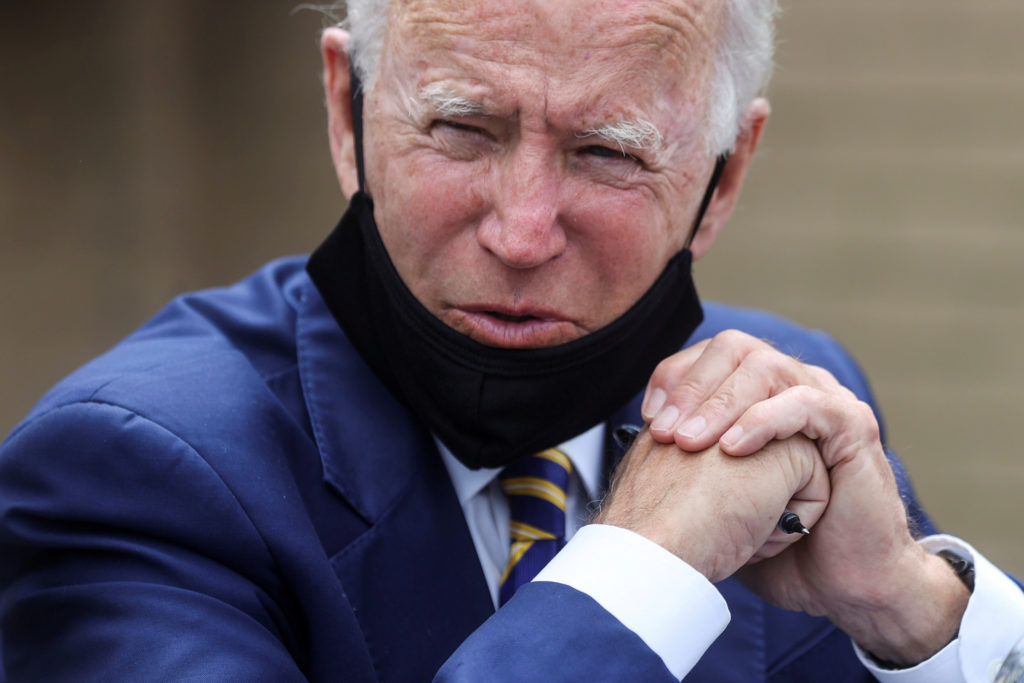 For Harris, the scrutiny is nothing new. As the district attorney for San Francisco and then state attorney general, Harris took steps to reform the justice system in California, including launching a program to help first-time drug offenders find work.

But she also tookmore conservative positions that angered liberals, such as defending the state’s death penalty as attorney general and arguing the state should not regulate the use of police body cameras.

During the primaries, progressive groups attacked her law enforcement career, pointing out her record was rife with contradictions, and Harris struggled at times to defend herself. She released a criminal justice reform plan centered on ending mass incarceration. But her career as a prosecutor and attorney general remained a sticking point with some younger, progressive voters who referred to her as a “cop” and refused to back her in the primaries.

Since Floyd’s death, however, Harris has been one of the most prominent voices in the Senate calling for criminal justice reform. Her campaign struggles from a year ago matter less than the work she’s done in recent months to push Congress to reform policing, said Bains, who served as a senior counsel in the Justice Department’s Civil Rights Division under former President Barack Obama.

“Right now, she has been a vocal opponent of police brutality. She’s really stepped into this moment,” Bains said.

Demings has also voiced strong support for criminal justice reform in recent weeks. Four days after Floyd’s death, Demings wrote an opinion piece in the Washington Post condemning the use of excessive force by police.

“Bad decisions can bring irrevocable harm to the profession and tear down the relationships and trust between the police and the communities they serve,” she wrote.

But Demings’ tenure as police chief in Orlando from 2007 to 2011 is also under greater scrutiny now that she is in the conversation to become Biden’s running mate.

An news report found that Black people were involved in 54 percent of incidents in which Orlando police officers used force in Demings’ last two years as chief; the number dropped to 40 percent in the first six years after Demings left the police department. The investigation also found that the average annual number of use-of-force incidents dropped slightly after Demings — who joined the department in 1983 — left the force to run for Congress.

Demings has defended her four-year stint as police chief, and Orlando Mayor Dyer said investigations into alleged police misconduct by officers “went through the appropriate processes in terms of determining whether there was an excessive use of force or not” while Demings was in charge.

Dyer also praised Demings for handling the challenges that came with serving as the city’s first female police chief. “It’s probably tougher being a female chief in command of an 85-percent male [police force] and in a very male-oriented profession. I think she navigated that extremely well,” Dyer said.

Other Demings allies in Orlando said many in the Black community watched with pride as she rose through the ranks to become the city’s top cop. When she became police chief, “we did look at her as a respite in a sense, because now we have a Black woman who understands Black people and our struggles. I think that kind of relaxed the atmosphere to a degree when it came to police relations,” said Regina Hill, a member of the Orlando City Council.

As Biden narrows the field of potential running mates ahead of a final choice, Dyer and others said they hope he sees having a background in law enforcement as an asset, not a liability.

Berry, the historian, said choosing Harris or Demings could help Biden beat Trump in November, even if it angers progressive voters in the process.

“The fact that they do have pro-police credentials will make people more confident. I don’t think it’ll help him with young Black people and progressive whites,” Berry said. “But it may help him to win the election.”