Sen. Kamala Harris, D-Calif., has faced criticism for her record on criminal justice since launching her 2020 presidential campaign, but her stance on police body cameras — a part of her former career as a prosecutor and state attorney general — has so far gotten far less attention.

The use of police body cameras in recent years is part of a broader debate over racial disparity in policing, an increasingly important issue for the Democratic Party’s progressive base — a bloc Harris and other Democrats need to win the party’s nomination.

But like other criminal justice issues, Harris’ past record on police body cameras is mixed, highlighting the challenges she faces in running as a former prosecutor and attorney general at a time when the party has shifted left on law enforcement policies.

Overall, Harris has been an advocate for the use of police body cameras. As California’s attorney general, the position she held before joining the Senate, Harris argued that body cameras help increase transparency and improve trust between law enforcement and the communities they serve.

Harris’ general support for police body cameras is in line with public opinion. A 2018 survey by the Pew Research Center found that the majority of both police and the public favor body cameras, with 50 percent of officers saying they would be more likely to act appropriately if they wore the devices and 59 percent of the public saying they would be more likely to cooperate with officers wearing body cameras.

But when it came to taking a position on, and implementing, body camera laws in California, Harris struck a more nuanced stance, drawing criticism from criminal justice advocates that still lingers years later.

A new debate over body cameras

Harris’ tenure as California’s top law enforcement officer from 2011 to 2017 was a period marked by high-profile police shootings, many of them involving unarmed black men and women, and other cases of police brutality and misconduct. California has one of the highest rates of deadly police shootings of any state in the country — an issue California lawmakers are now addressing with a bill moving through the state legislature that would limit when police officers can take lethal action.

Outside of California, the deaths of Michael Brown in Ferguson, Missouri, Freddie Gray in Baltimore, Sandra Bland in Texas, and Philando Castile in Minnesota, among others, also renewed the debate about racial inequalities in policing and the criminal justice system. Among the calls to action from advocates around the country while Harris was serving as California’s top law enforcement official: the use of police body cameras — typically strapped to the chests of police officers to capture footage of arrests and related incidents — as a fundamental part of decreasing the number of fatal police shootings each year.

The use of police body cameras is part of a broader debate over racial disparity in policing, an important issue for the Democratic Party’s progressive base.

Following Brown’s 2014 death, in particular, more states started to explore police body camera initiatives.The devices were relatively rare at the time: According to a report from the U.S. Department of Justice, a survey of 500 police departments across the country found that less than 25 percent of departments used body cameras before 2014. (Police departments are not required to report this information to the Justice Department). By the start of 2016, nine states had passed police body camera laws, and more than a dozen other states were considering legislation on the issue, according to a study produced at the time by the Urban Institute.

Even before Ferguson, California had a history of setting precedent in implementing innovative police technology. In 2013, the Rialto Police Department became the first police department in the country to implement a department-wide body camera initiative. The department instituted the policy after participating in a 2012 experiment that found that incidents of force decreased by 50 percent and citizen complaints declined by 90 percent when officers wore body cameras. The findings drew national attention, helping spark new interest in the technology.

Harris become directly involved in the issue when California lawmakers proposed body camera legislation following several successful pilot programs across the state. Under Harris’s watch as attorney general, the California Department of Justice in 2015 became the first statewide agency in the country to adopt a body camera program.

The program was a victory for criminal justice advocates, and placed Harris at the forefront of a progressive law enforcement policy. But that same year, Harris warned against implementing a “one-size-fits-all” solution. Instead, Harris said she was in favor of local agencies, not the state, regulating the use of police body cameras.

“I as a general matter believe that we should invest in the ability of law enforcement leaders in specific regions and with their departments to use [their] discretion to figure out what technology they are going to adopt based on needs that they have and resources they have,” Harris told reporters in Sacramento in May 2015. 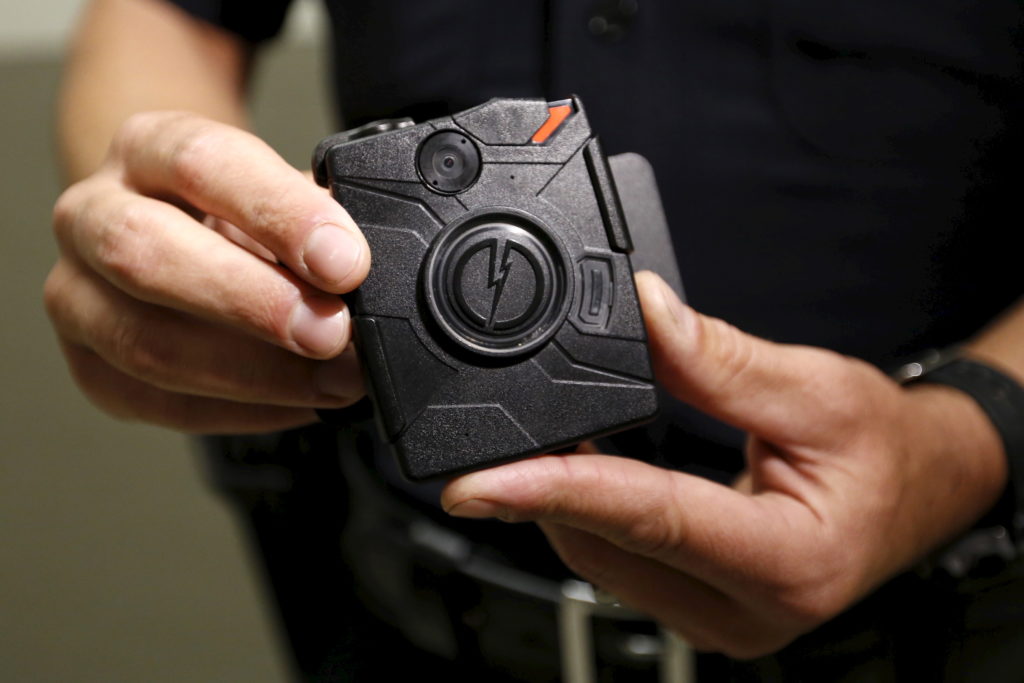 A Los Angeles Police Department technology bureau officer shows off a new body camera to the media in Los Angeles, on August 31, 2015. California has one of the highest rates of deadly police shootings in the country. File photo by REUTERS/Al Seib/Pool

Harris was responding to legislative proposals that would have mandated specific standards for local jurisdictions that use police body cameras. A bill in the state Assembly would have required local law enforcement departments to make their records and policies regarding body cameras available to the public. The bill would have allowed police departments to view body camera footage before turning it in — but under the plan officers would have been required to give initial statements about incidents involving fatal force before viewing the footage.

Supporters of the the legislation argued that it would build better relations between police and local communities. Opponents claimed the bill would undermine the work of law enforcement by adding additional oversight.

“The mindsets, the positions, the timing, the lighting, it demonstrates a lot of the reality that some people just never get exposed to. But the problem with having a statewide mandate [is] that it conflicts with our ability to prosecute crimes,” Ronald Lawrence, the president of the group California Police Chiefs, said in an interview.

READ MORE: What does Kamala Harris believe? Where the candidate stands on 9 issues

In the end the bill failed, and Harris some faced criticism for not doing more to support it. Her position was seen by some critics as political maneuvering — an attempt to triangulate by supporting the use of police body cameras overall, but saying the state shouldn’t get involved in implementing the policy.

Others argued that with local agencies in charge, officers wouldn’t be held to the highest degree of accountability. It’s an argument that some critics still voice several years later.

“When you allow local jurisdictions to opt out, what you’re ensuring is disproportionate types of enforcement,” said Lara Bazelon, a law professor at the University of San Francisco who questioned Harris’ record as a prosecutor in a New York Times op-ed earlier this year.

The Harris campaign declined to comment for this story.

The issue of local accountability has come up across the country, as law enforcement authorities from Atlanta to Minneapolis have grappled with how to use body cameras. Some police departments have scrapped body camera programs all together, citing high costs. 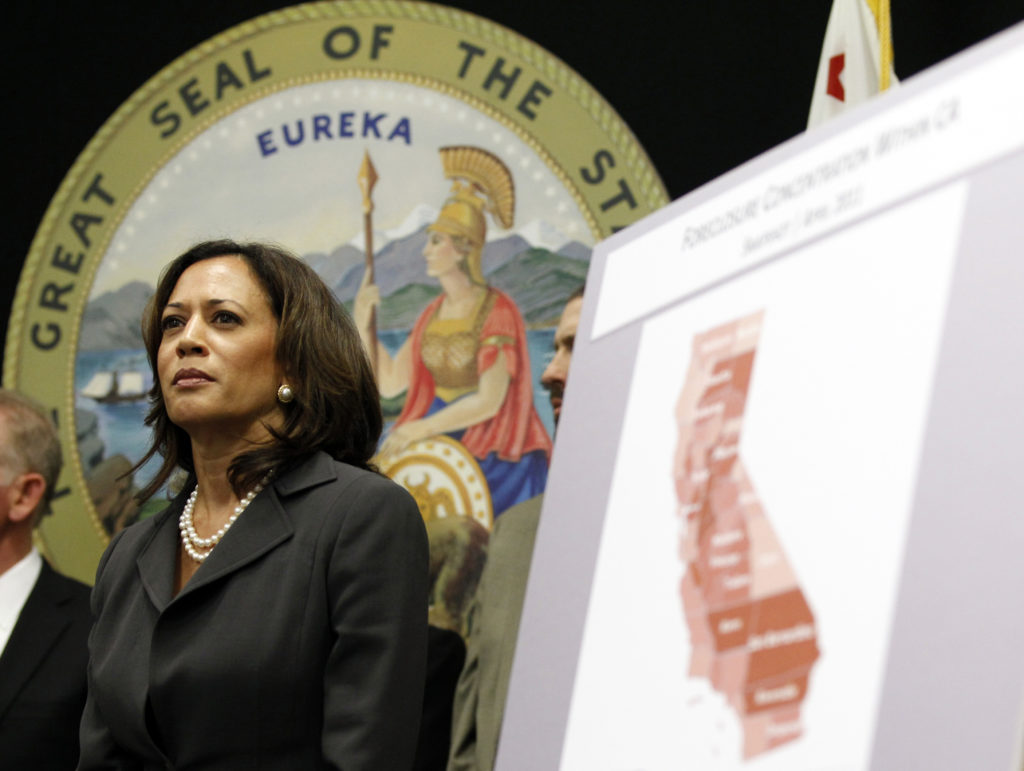 Then-Attorney General of California Kamala Harris, pictured at a news conference in Los Angeles in 2011. File photo by REUTERS/Mario Anzuoni

How to pay for the technology has been a recurring part of the debate as well, with many police departments arguing the cameras are simply too expensive. “In our situation, it really comes down to a matter of costs,” Lawrence said, adding that it’s “not just the upfront cost but the ongoing costs for the infrastructure and largely the redacting of information” from police footage before it’s released.

Body camera technology can range from $200 to $1,000 per camera in initial costs depending on required technology for various regions. Maintenance and upkeep of the cameras are also contributing factors when it comes to expenses, with some police departments citing that storing the cameras can cost up to about $200,000 per year. Despite the push, California has no legislation in place to tackle body camera costs.

Lingering criticism on a ‘core issue’

Still, some critics, including black voters, have taken to social media to express concerns over Harris’ record and stance on criminal justice issues, with some even going as far as calling her anti-black.

“I think all voters and in particular voters of color have a right to be concerned that she didn’t take a bolder, courageous decision on body worn cameras and I say that because these officer involved shootings disproportionately involve young black men and a crucial beginning to the truth is having video evidence,” Bazelon said.

“Criminal justice reform shows up as a core issue for black voters. Of course black voters are not a monolith around it, there’s a range of opinions on how to address it. But regardless of people’s position on the various elements, criminal justice remains a top issue,” said Adrianne Shropshire, the founder of BlackPAC, an organization that focuses on mobilizing black voters through grassroots engagement.

Harris has defended her positions and made an effort to address the criticisms head-on since launching her presidential campaign in January. When asked about her criminal justice record at a CNN town hall in Iowa last month, Harris replied, “I’ve been nothing but consistent.”

“She is not shying away from the conversation. But she’s also not trying to apologize for being a prosecutor,” says Doug Thornell, a Democratic strategist.

Others said Harris’ law enforcement background could make it hard for her to make inroads with the party’s progressive base. Harris is running “against Cory Booker and other candidates who are sort of positioning themselves as champions of progressive policy,” said Vladimir Medenica, a postdoctoral scholar at the University of Chicago who studies American politics and race.

But Thornell argued voters would look past Harris’ stints as a prosecutor and attorney general.

“She wasn’t perfect,” he said. “People don’t want perfect presidents, they just want someone they believe in, and someone that they believe will stand with them and fight for them.”

Left: During Sen. Kamala Harris's tenure as attorney general of California, there were a number of fatal police shootings in the state and around the country that led to reforms, including new police body camera laws. File photo Saul Loeb/Pool via REUTERS