How Democrats’ unconventional convention succeeded — and where it missed the mark

Say goodbye to the traditional political convention. It turns out you don’t need a packed arena of sign-waving supporters to pull off an effective nominating party.

The DNC went virtual for the first time in history, and going into it nobody knew quite what to expect. Was it flawless? No. There were some technical glitches, and awkward moments aplenty as the party and the Biden campaign adapted on the fly to hosting a largely remote convention in the middle of a pandemic.

Like conventions of the past, long stretches of programming were thinly disguised infomercials for the Democratic Party. Some things will never change. But overall, Democrats found innovative ways to highlight their core message of valuing diversity and giving all Americans an equal chance to succeed.

Joe Biden made those themes and a blistering critique of President Donald Trump’s response to the coronavirus the centerpiece of his speech Thursday in Wilmington, Delaware, accepting the Democratic presidential nomination.

“Just judge this president on the facts. Five million Americans infected with COVID-19. More than 170,000 Americans have died. By far the worst performance of any nation on Earth,” Biden said.

Sen. Kamala Harris, the Democratic vice-presidential nominee, ripped into Trump as well on Wednesday in the biggest speech of her political career, pointing out the racial inequities in America that the pandemic has laid bare.

“While this virus touches us all, let’s be honest, it is not an equal opportunity offender. Black, Latino and Indigenous people are suffering and dying disproportionately. This is not a coincidence. It is the effect of structural racism,” Harris said. 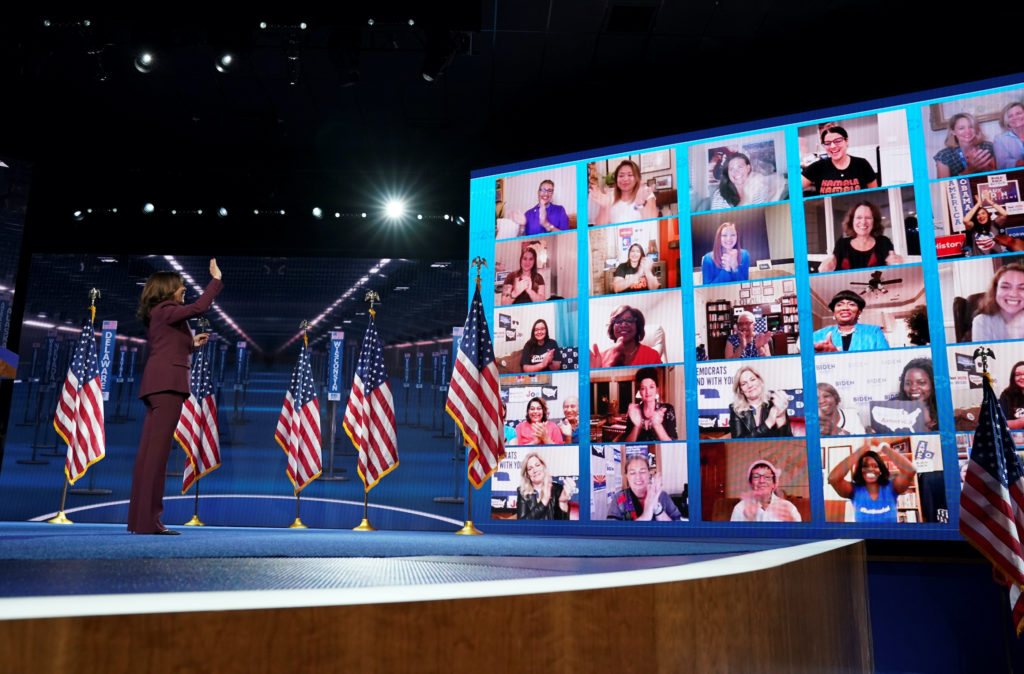 The remarks from Biden and Harris were in keeping with a pattern of relentless attacks on Trump from other high-profile Democrats throughout the convention, including from former President Barack Obama.

But some of the sharpest and most poignant critiques came from ordinary Americans who were featured throughout the convention discussing, oftentimes in raw, painful detail, how they’ve been impacted by immigration policy, climate change, and gun violence, among other issues, as well as the current public health crisis.

In a short pre-recorded video played on Monday night, Kristin Urquiza shared the story of her father’s death from COVID-19. “He had faith in Donald Trump. He voted for him, listened to him, believed him and his mouthpieces when they said that the coronavirus was under control and was going to disappear,” Urquiza said. Because he believed in Trump, she said, her father went to a crowded karaoke bar after Arizona’s stay-at-home order was lifted.

Then Urquiza delivered one of the most memorable lines of the convention. “My dad was a healthy 65-year-old. His only preexisting condition was trusting Donald Trump, and for that he paid with his life.”

Stories like Urquiza’s helped put a human face on a pandemic that has killed more than 170,000 Americans and left millions more out of work.

The absence of convention-goers also pointed to the ways in which COVID-19 has upended the election. Democratic delegates followed the DNC’s instruction to stay home out of concerns over spreading the virus and participated virtually, conducting party business from afar. That included the roll call vote Tuesday which officially handed Biden the nomination.

The roll call vote has not been a highlight of the modern convention, in large part because everyone already knows the results. It has not been all that captivating to watch, either, as delegates take turns announcing their states’ vote totals from various sections of an indoor arena.

This year, the DNC created a visual tour of the nation, with delegates appearing briefly in carefully selected locations in their home states. The video featured Democrats of all ages, races and ethnicities in big cities, small towns and remote rural areas describing what makes their communities unique.

The montage captured the country’s demographic diversity — and underscored the difficulty of building a broad enough coalition of Democratic voters to win a presidential nomination. More than two dozen Democratic presidential contenders tried, but Biden was the only one who was able to succeed. A number of his former rivals delivered speeches throughout the convention, urging their supporters to come together to deliver Biden a victory in November, and recorded a video call reminiscing about Biden that played on the final night. 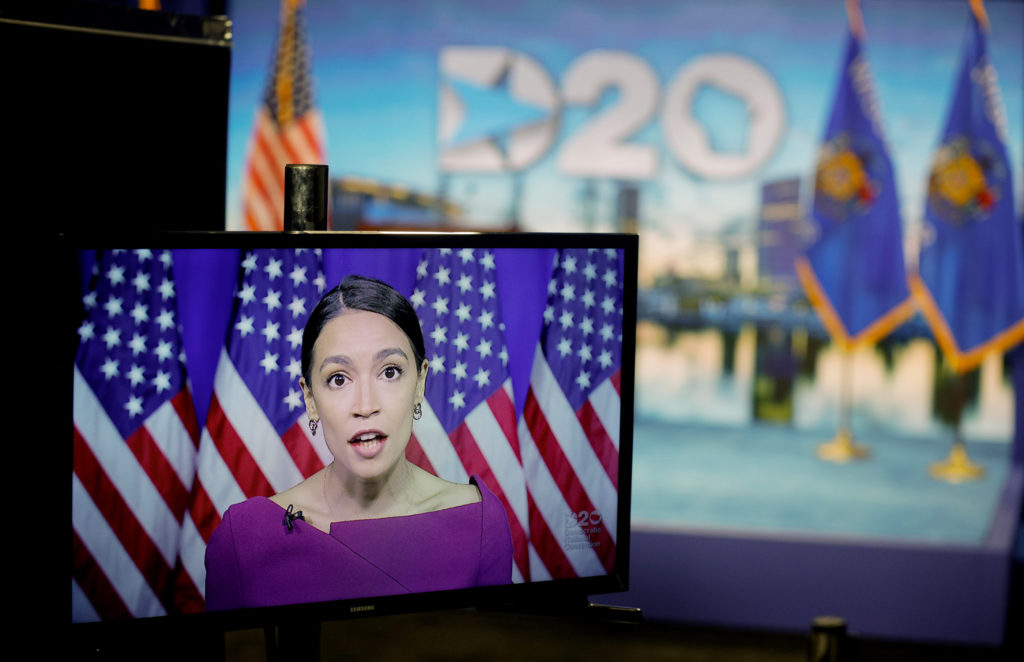 No doubt some pandemic-induced innovations at the DNC will end up being one-offs that won’t reappear in 2024 and beyond. But this year’s creative roll call vote could become a fixture at future conventions.

The sharp focus on a forward-looking, increasingly diverse America was at times dulled by speakers representing the party’s past. An appearance by former President Bill Clinton, for example, gave nostalgic older Democrats a flashback to the party’s comeback in the 1990s. But Clinton’s centrism and personal behavior are now out of step with a left-leaning Democratic Party in the era of the Me Too and Black Lives Matter movements.

In a sign of the changing times, Clinton’s brief speech was overshadowed by a debate about the limited role given to Rep. Alexandria Ocasio-Cortez of New York.

The freshman lawmaker appeared only once, and then for just a minute and a half, to second the nomination of Sen. Bernie Sanders of Vermont. Angry progressives declared it a missed opportunity for Biden, who has struggled to connect with the liberal wing of the party and has not embraced “Medicare for All” and other reforms championed by Sanders and Ocasio-Cortez.

Still, the fact that Ocasio-Cortez made the program at all signaled how quickly her star has risen in the less than two years since she became the youngest woman ever elected to Congress at the age of 29 in 2018. Sanders and Sen. Elizabeth Warren of Massachusetts both had prominent speaking roles at the convention. But a younger generation of progressive leaders like Ocasio-Cortez are waiting in the wings, ready to seize the spotlight.

The divide between progressive and moderate Democrats that defined the primaries remained on display at the convention; Sanders said he would have liked to see more progressives on stage this week. But in the end the DNC was a celebration of the pragmatic, center-left politics embodied by the nominee and his two immediate predecessors, Hillary Clinton and Obama.

Obama delivered arguably the best speech of the convention, and one of the best of any convention in recent memory. Standing in front of a lectern at the Museum of the American Revolution in Philadelphia, a visibly emotional Obama delivered a searing indictment of Trump’s presidency.

“For close to four years now, he’s shown no interest in putting in the work. No interest in finding common ground. No interest in using the awesome power of his office to help anyone but himself and his friends,” Obama said. “Donald Trump hasn’t grown into the job because he can’t.”

The speech represented a shift for Obama, who had largely refrained from openly criticizing Trump, following the model used by his predecessor, former President George W. Bush.

Biden, in contrast, has been publicly rebuking Trump for the past several years. On Thursday, it was left to him to deliver the closing argument against Trump on the final day of the convention.

Trump, Biden argued, is “a president who takes no responsibility, refuses to lead, blames others, cozies up to dictators, and fans the flames of hate and division. He will wake up every day believing the job is all about him. Never about you. Is that the America you want for you, your family, your children?”

It was not a typical convention-ending speech. Biden did not speak before a large crowd waving placards. He and Harris, along with their spouses, wore face masks when they appeared together after Biden’s speech.

More than anything, the address offered yet another reminder of the enduring weirdness and challenges associated with combining election year politics and a public health crisis. Biden is hoping that come November, voters give him the chance to bring conventions — and regular life — back to some version of normal.