How Manafort violated his plea deal, according to Mueller’s latest documents

Mueller’s indictments have focused on Manafort’s years of political consulting with Ukraine and other foreign players — ties that also forced Manafort to step down from Trump’s campaign in the summer of 2016. Manafort pleaded guilty in August to eight counts of tax and bank fraud. In a separate trial in September, he pleaded guilty to two counts of conspiracy, one of them for failing to register as a foreign agent, for his work with Ukraine.

At that time, he entered into a plea agreement to cooperate with Mueller’s investigation into Russian election interference and possible ties to Trump’s campaign. Manafort met with the special counsel’s office 12 times, according to Friday’s heavily redacted court filing — three times before the plea agreement was made.

But Manafort provided investigators with a range of false statements, according to Mueller, largely about his contact with Trump administration officials and his communications with Konstantin Kilimnik, a Russian-Ukrainian political consultant who has become a central figure in the investigation.

For instance, Manafort told investigators he had not communicated with anyone who was serving in the administration, nor had he asked anyone to do this on his behalf. But Mueller’s team discovered Manafort had communication with one such individual through February 2018, and in May, had authorized someone to speak with a Trump official on his behalf.

“These were not instances of mere memory lapses,” Mueller’s memo said.

Earlier this year, Mueller referred an investigation into foreign lobbying by two firms that did work for Manafort to prosecutors in New York. That investigation, which has ramped up in the past few weeks, according to the Associated Press, focuses on why those firms did not register as foreign agents while working under Manafort. 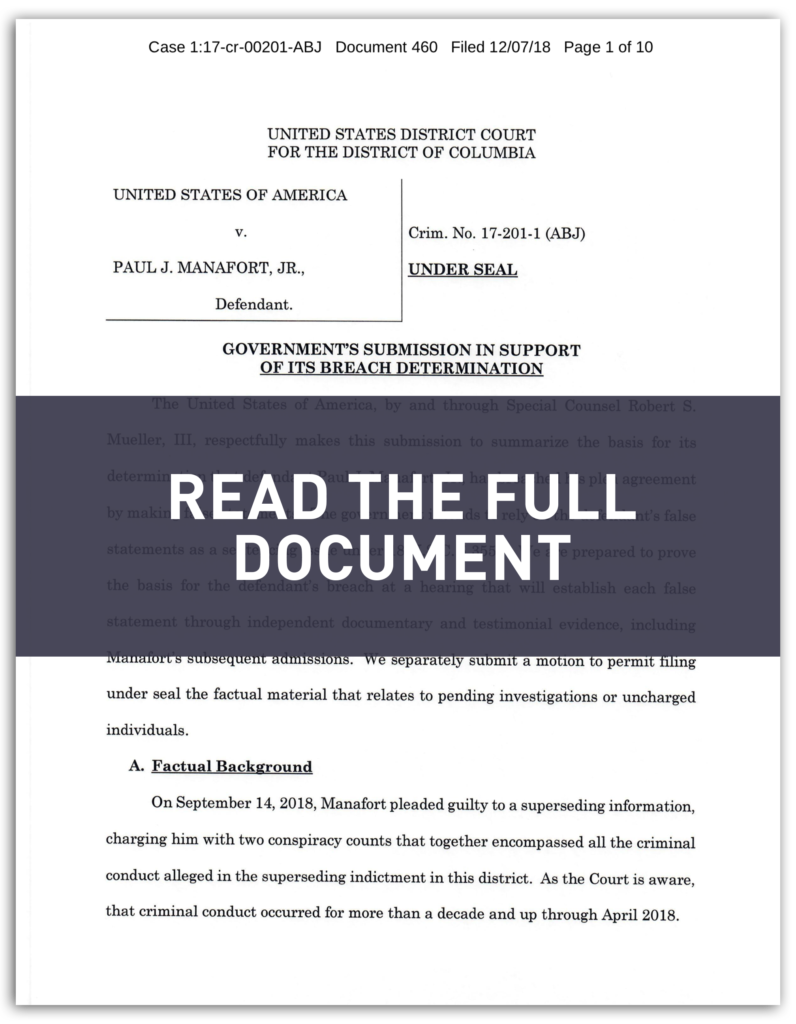