What it’s like to cover the Paul Manafort trial

Since the case against Paul Manafort, the former Trump campaign manager, began on July 31, journalists and spectators have swarmed the Eastern District federal courthouse in Alexandria, Virginia, hoping to secure a seat in one of the most closely watched courtrooms this year. Reporters — including me — have made standing in line an early-morning routine, stashing away iPhones and smartwatches to witness special counsel Robert Mueller’s team bring its first case in the Russia probe to trial.

Before entering the building, forbidden items — our phones, laptops, food — were forfeited to a local cafe across the street. For a $2 fee, cafe owners stashed all electronics under the cash register and handed you a rectangular slip of paper with a number. If you returned at recess to check your messages, you repeated the process and another $2 was added to your tab.

On the most explosive days of the trial, exiting the courtroom for longer than a trip to the restroom meant risking your spot.

But the electronics ban, which is intended to prevent unauthorized recordings or photos, did not prevent journalists from reporting on testimony as it happened. Throughout the day, they snuck in and out of the courtroom to publish what they heard and saw, and when news broke, they raced from the courtroom into a crowded elevator to report it.

The easiest way to reach the newsroom, a producer, or really anyone outside of the courthouse, was through a pay phone on the first floor. Getting there first was paramount — though there are two phones, only one actually worked, and entering the line late risked missing a chance to use it during a short recess.

Because the pay phone is often already taken, reporters found ways to forego the line, either by asking cameramen outside to hold onto their devices or by rushing across the street to the cafe where their phones were stored.

On the most explosive days of the trial — during Rick Gates’ testimony or closing arguments — exiting the courtroom for longer than a trip to the restroom meant risking your spot, which was only truly secure when a body occupied it. Some newsrooms brought interns to guard seats during recess or lunch, while reporters without backup sacrificed breaks altogether to hold their places.

Crammed together on an unforgiving wooden bench, one female spectator likened the hours in the courtroom to flying economy class on an airplane: it’s cold and crowded, with no cell service or other method of communication with the world outside the cabin. 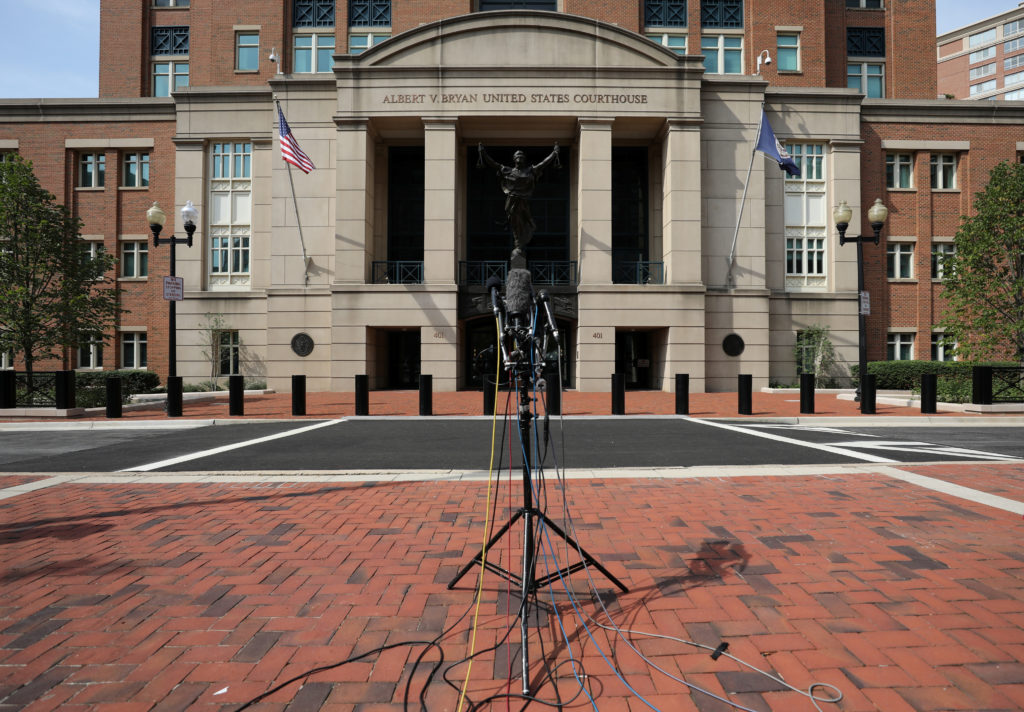 Microphones are positioned outside the U.S. District Courthouse where former Trump campaign manager Paul Manafort has been on trial for bank and tax fraud charges stemming from special counsel Robert Mueller’s investigation of Russia’s role in the 2016 U.S. presidential election. Photo by REUTERS/Chris Wattie

Judge T.S. Ellis III, who has presided over the case, echoed this sentiment when he compared his court to Ancient Rome and declared himself Caesar. When court was in session, you were locked in another world that Twitter could not penetrate. And in that world, Judge Ellis’ rule was absolute.

Ellis both relished in the spotlight of a packed courtroom and complained about reporters impeding proceedings. During early-morning hearings that took place before a full courtroom of Manafort spectators, Ellis delivered lofty civics lessons on the morality of guilty pleas and sentencing. He also scolded reporters for disrupting the trial when they rushed out of the room to share news on Gates’ testimony.

Growing accustomed to the rules of the Albert V. Bryan Courthouse meant surviving the occasional misstep. Once, I nearly exited the building without my driver’s’ license, a mistake that would have cost me my reentry for the day. Another time, the woman sitting beside me lent me a sweater when she thought I looked cold. “Someone sent me here to mother you,” she joked.

Eventually, the laws of the courthouse became automatic. I stopped missing my phone when it was gone for hours, and brought an empty bag that I used to hold my place in court when I needed to use the pay phone or take a break. I finished a book, started another one, and brought jackets to stay comfortable in the air conditioning. I instinctually pushed the button for the ninth floor when in elevators, even when I was home in my apartment building at the end of the day.

After two weeks of rushing to score a seat in the courtroom, the ongoing wait for the jury’s verdict has given journalists a chance to take a breath.

After two weeks of rushing to score a seat in the courtroom, and long days listening to testimony, the ongoing wait for the jury’s verdict has given journalists a chance to take a breath. The atmosphere switched from breaking news to killing time. Still adhering to the no-phones policy, members of the media toted along a vast and diverse selection of books, including a biography of Malcolm X, a nonfiction account of a Silicon Valley startup, true crime stories and novels. One woman brought a deck of cards and played solitaire on the empty bench.

Despite Paul Manafort’s upscale lifestyle, which prosecutors attempted to paint in detail for the jury, his case was not glamorous. The prosecution amassed nearly 400 documents and brought 27 witnesses to the stand, most of whom worked as accountants, bankers or bookkeepers. On trial for tax and bank fraud, Manafort’s case, for the most part, went along like any other white-collar financial crime case.

Yet, the court filled every seat in the room and a hundred more in a remote viewing location every day of the trial. That’s more than 200 people who were willing to get in line, give up their phones and sit shoulder-to-shoulder for hours to catch a glimpse of history.