How Trump has made campaigning ‘part of the presidency’

ORLANDO, Florida — President Donald Trump broke with precedent by officially filing paperwork to run for reelection the same day he was sworn into office. Nearly two-and-a-half years later, Trump formally kicked off his second White House campaign at a rally Tuesday in Orlando, Florida, picking a key battleground state to make his case for a second term.

Trump flipped Florida, the largest swing state in the nation, from blue to red in 2016. The state’s 29 electoral votes helped him win the presidency, but he only carried the state by 1.2 percentage points. Now Trump is sitting on a combined war chest of $168 million from his own campaign and Republican Party funds, and eyeing Florida as a key to winning in 2020 and protecting the GOP’s 2018 midterm election wins up and down the ballot.

“Tonight I stand before you to officially launch my campaign for a second term as president of the United States,” Trump said after taking the stage Tuesday night, assuring his supporters that they had a “tremendous future” in store “if we keep this team in place.”

Ahead of the rally Tuesday night at the 20,000-seat Amway Center, Trump supporters gathered under a scorching Florida sun for an outdoor festival with live music and food trucks organized by the president’s campaign, which was dubbed the “45 Fest.”

Alfred Drake, a 53-year-old resident of Sanford, Florida, said he was happy with the president’s accomplishments so far, and was looking forward to voting for Trump again in 2020.

The economy, immigration, Trump’s brashness — Drake said he liked it all.

“I’m just looking for everything to go the way it’s going right now, there are a lot of jobs,” Drake said. “He’s the only one who’s doing what he says and I appreciate that.”

Drake said he didn’t see a viable 2020 Democratic challenger to Trump. Democrats pushing for impeachment against Trump “are going to make it easier for Trump to be re-elected,” he added.

Elizabeth Williamson, a retiree who lives near Mary Lake, Florida, in Republican-leaning Seminole County, also said she plans to vote for Trump again in 2020. 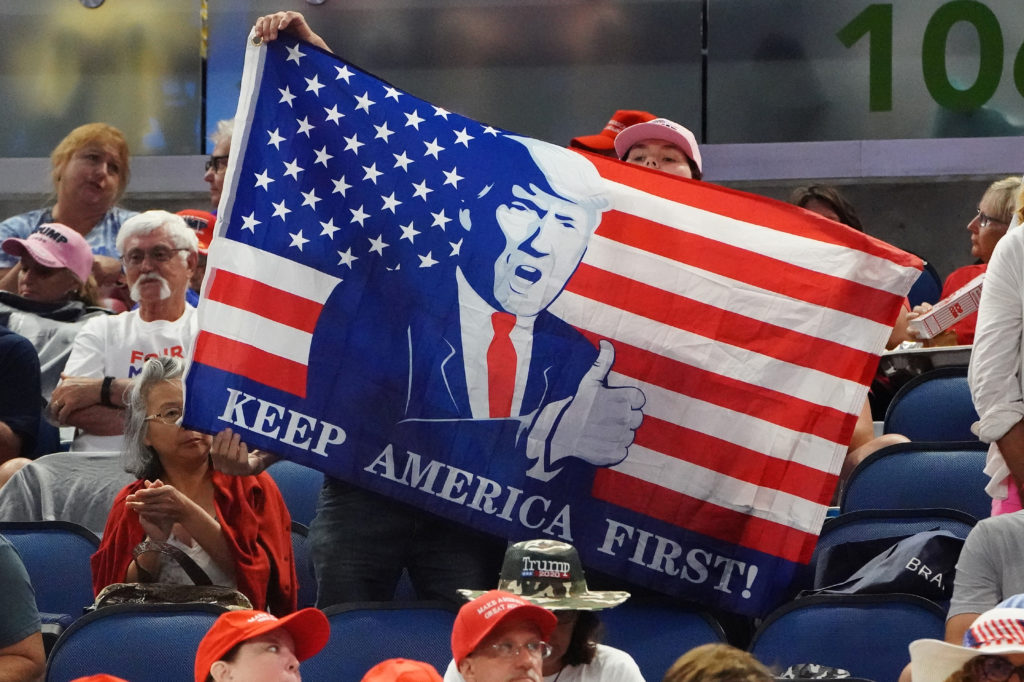 People sit in the stands with a flag before a rally for President Donald Trump at the Amway Center in Orlando on June 18, 2019. REUTERS/Carlo Allegri

Trump dismissed the report and investigation as “a hoax” at the rally, repeating attacks he’s made against the probe since it began two years ago. Mueller found there was no evidence the Trump campaign coordinated with Russia to interfere in the 2016 election. But he did not exonerate Trump for obstruction of justice, saying instead that he could not reach a conclusion about whether the president interfered with the investigation.

Trump held his first campaign-style rally in February 2017, a month after Inauguration Day, in Melbourne, Florida, just an hour southeast of his Tuesday rally in Orlando. Trump has consistently held campaign rallies, typically in areas with high numbers of supporters, ever since.

The strategy represents a break from his predecessors. President George W. Bush waited more than two years after he took office before filing for reelection in May 2003, and didn’t start his campaign push until the next year. President Barack Obama waited just more than a year before launching his reelection bid with a video in April 2011, but didn’t hold his first rally until more than a year later.

But while the reelection campaign timeline has moved up in recent years, historically presidents have largely scaled back campaigning, after taking office.

“Trump, on the other hand, never stopped campaigning. He’s simply made it part of his presidency.”

That has allowed new presidents to immerse themselves in governing before they launch reelection bids touting their first-term achievements, said Stephen Engle, a presidential historian at Florida Atlantic University.

“Trump, on the other hand, never stopped campaigning,” Engle said. “He’s simply made it part of his presidency.”

Arguably no other American president embraced campaigning as wholeheartedly as Trump, who enjoys appearing before supporters and the combat of the 24-hour news cycle, Engle said. Trump has also shown little patience for the process of governing, Engle added.

“It’s not only that Trump’s started so early, [which is] unprecedented. But it’s the scale of how much he campaigns to how much he governs,” Engle said.

Trump ran in 2016 as a self described political outsider and became the first candidate to win the White House without first holding elected office or serving in the military. Given his unique rise in politics, “the search for precedents” to understand his presidency and reelection campaign “is not useful,” said Ellen Fitzpatrick, a presidential historian at New Hampshire University.

“The precedents really don’t speak to the moment that we’re in right now. I hate to say that as a historian, but part of studying history is [recognizing what represents] a departure from” the norm, Fitzpatrick said. 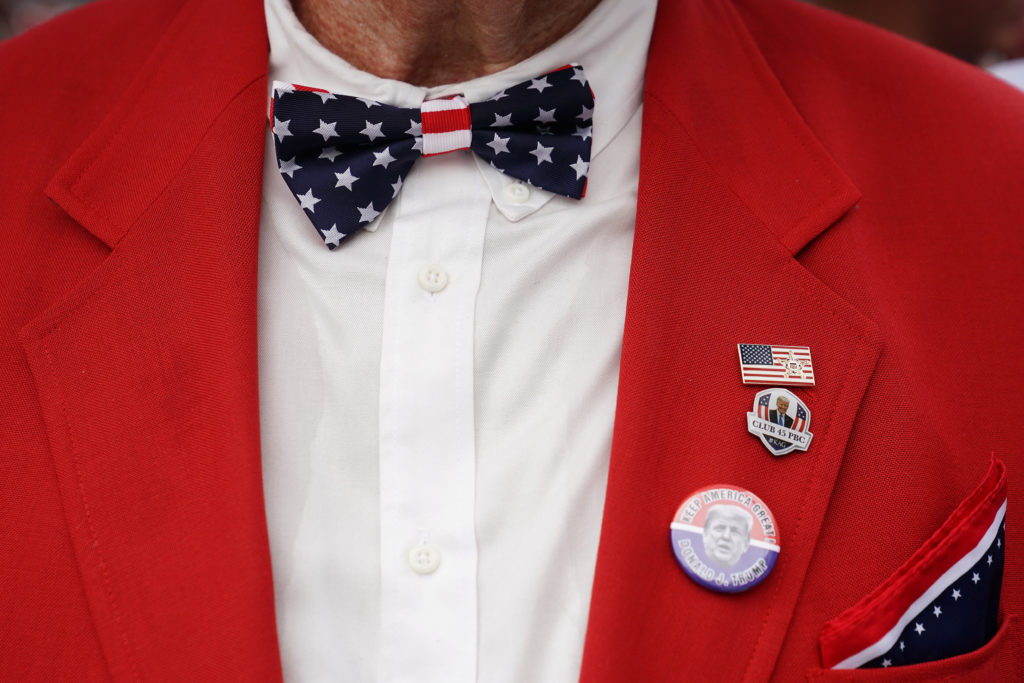 A Trump supporter at the rally in Orlando on Tuesday. Republicans said Trump remains popular in the state and is well positioned to repeat his 2016 victory there. Photo by REUTERS/Carlo Allegri

When it comes to Florida, Trump in 2016 outperformed past Republican candidates among the state’s older, white voters. Ahead of the 2018 midterm elections, Trump campaigned heavily in the state, helping the GOP win the governor’s mansion, a U.S. Senate seat and a swath of state legislative seats.

Florida Republicans “have been united and we’ve never been stronger in terms of support for a single individual than the President,” said Republican state Sen. Joe Gruters, who represents the Sarasota area and co-chaired the Trump campaign’s 2016 Florida operation.

Florida Republicans like Gruters said Trump’s continued tough stance on immigration was the best way for him to maintain his popularity among the state’s GOP and Independent voters, especially white males.

Immigration “remains the hottest issue for the Republican base in Florida,” Ryan Tyson, the president of the Florida-based polling firm Tell Opinion Research, said.

Florida Democrats said the party’s losses in 2018 showed they have work to do to win the state back in 2020. Despite a surge in turnout among young Hispanic and black Democratic voters in the midterms, Republicans outperformed Democrats by about 1.5 percentage points across the state.

“Florida is going to be tooth and nail” in 2020, said Mike Coleman, the chairman of the Florida Democratic Party’s Campaign Committee. “It’s just a pure turnout race, now more than ever.”

Coleman said he recently told Florida Democratic Party activists they would need to register 500,000 more voters before 2020 in order to be competitive.

Polls show Floridians are nearly evenly split between their approval and disapproval of Trump’s job as president. But he is battling disapproval rates of 50 percent or higher in several other key 2020 states, including Arizona, Michigan, North Carolina, Ohio, Pennsylvania and Wisconsin.

That has put extra pressure on Trump to win Florida, where his own internal campaign polls found him losing the state to former Vice President Joe Biden, the current Democratic frontrunner, by 7 percentage points in March, according to ABC News.

At his rally Tuesday night, Trump, who defied the odds in 2016, made clear he believes he is positioned to do the same in 2020.

“We did it once and we’ll do it again, and this time we’re going to finish the job,” he said.

Left: President Donald Trump formally kicked off his re-election bid with a campaign rally in Orlando, Florida, on June 18, 2019. Photo by Carlos Barria/Reuters