Impeachment certain, Democrats’ strategy is a gamble for 2020

Ahead of a final impeachment vote Wednesday, House Republicans warned Democrats they were making a grave political mistake by trying to remove President Donald Trump from office.

As the final floor debate got underway, Republicans made sure their message was clear: Democrats are impeaching a president based on hearsay evidence that didn’t prove Trump did anything wrong.

The divisive debate before a final vote underscored the mounting pressure Democrats face to prove they made the right choice in pursuing an impeachment investigation into Trump’s conduct with Ukraine.

Polls show the public is split on impeachment, with half the country in support of removing the president from office and the other half opposed. Democratic voters in key 2020 primary and general election states expressed ambivalence about the impeachment investigation and how it would impact the party in the elections next year.

In Iowa, “impeachment is something that people are aware of but it’s not the first thing” on many voters’ minds, said Sarah Trone Garriott, a Democratic activist running for a suburban state Senate seat outside of Des Moines. “We’re all paying attention, but we’re all moving on with our lives.”

Joe Logan, the president of the Ohio Farmers Union, said concerns over trade and the economy in Ohio have overshadowed the impeachment battle in Washington. If Democrats had hoped to sway some independent and moderate Republicans to abandon Trump over impeachment, that effort has largely failed, Logan added.

“People who are predisposed to support President Trump will certainly disregard this impeachment and it won’t make much difference,” Logan said.

Democrats have argued that the impeachment investigation captured the public’s attention. In public hearings over the past weeks, several current and former administration officials testified that Trump withheld $391 million in military aid to Ukraine and an opportunity for a White House meeting, in an attempt to pressure the country to announce an investigation into former Vice President Joe Biden, a leading 2020 Democratic contender, and his son, Hunter Biden. The younger Biden served on the board of the Ukrainian gas company Burisma while his father was vice president. 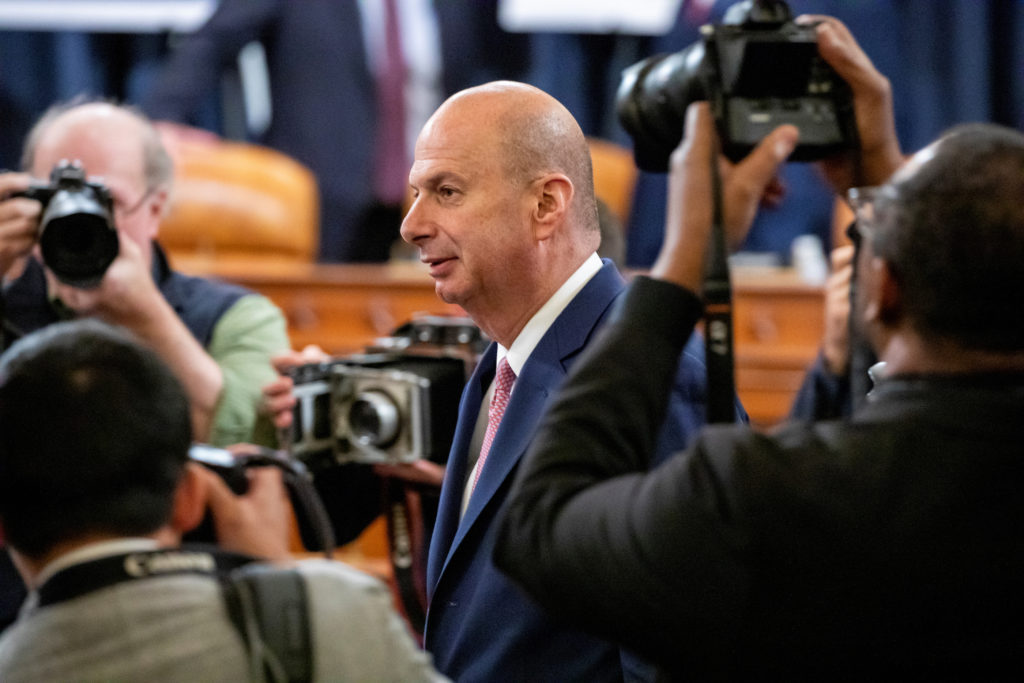 Gordon Sondland, the U.S. Ambassador to the European Union, provided one of the more dramatic testimonies during the public impeachment hearings in the House. File photo Samuel Corum/Pool via REUTERS

The president has defended his actions, including the call with Zelensky, and criticized the impeachment investigation as a partisan attack. House Republicans say Trump did nothing wrong. They have also argued that the investigation has blocked Congress from working on other issues. That argument is resonating with voters in states that Democrats need to win to beat Trump in 2020, said Mark Graul, a Republican strategist in Wisconsin.

“If you ask most people in Wisconsin if Congress is getting anything done, they’d said no,” Graul said.

Democratic lawmakers said in interviews they were confident that Americans understood the president’s actions were wrong and required a response from Congress.

“Were committed simply to doing the right thing,” said Rep. Hakeem Jeffries, D-N.Y., a member of the House Democratic leadership, adding, Republicans are “playing politics. We’re lifting up the Constitution.”

Others argued that standing up to the president could rally the party’s base in 2020. “I don’t foresee” a wave of House Democratic losses over the impeachment issue, said Rep. Val Demings, D-Fla. “As a matter of fact, we’re expecting to pick up some seats in 2020.”

But some acknowledged the reality that voting to impeach the president was not without risk. “This is a perilous political moment,” said Rep. Veronica Escobar, D-Texas. Democrats who support impeachment “are putting country above their own self preservation,” Escobar said.

Next year, Democrats must defend 31 House districts that voted for Trump in 2016. The list includes moderate swing districts that could determine control of the House. The National Republican Congressional Committee, the House GOP’s campaign arm, has already begun targeting vulnerable Democrats who support removing Trump from office.

Senate Democrats are under less pressure than their House counterparts. Only one Democrat up for reelection in 2020, Sen. Doug Jones of Alabama, holds a seat that’s rated as a “toss up” by the Cook Political Report. Nevertheless, in the Senate trial next year, Democrats will have to defend their decision to back an impeachment that very few, if any, Republicans will support.

The timing of the Senate trial, which could start as soon as early January, will also create an unwelcome distraction for Democrats at a time when the party will be focused on choosing a presidential nominee to take on Trump. 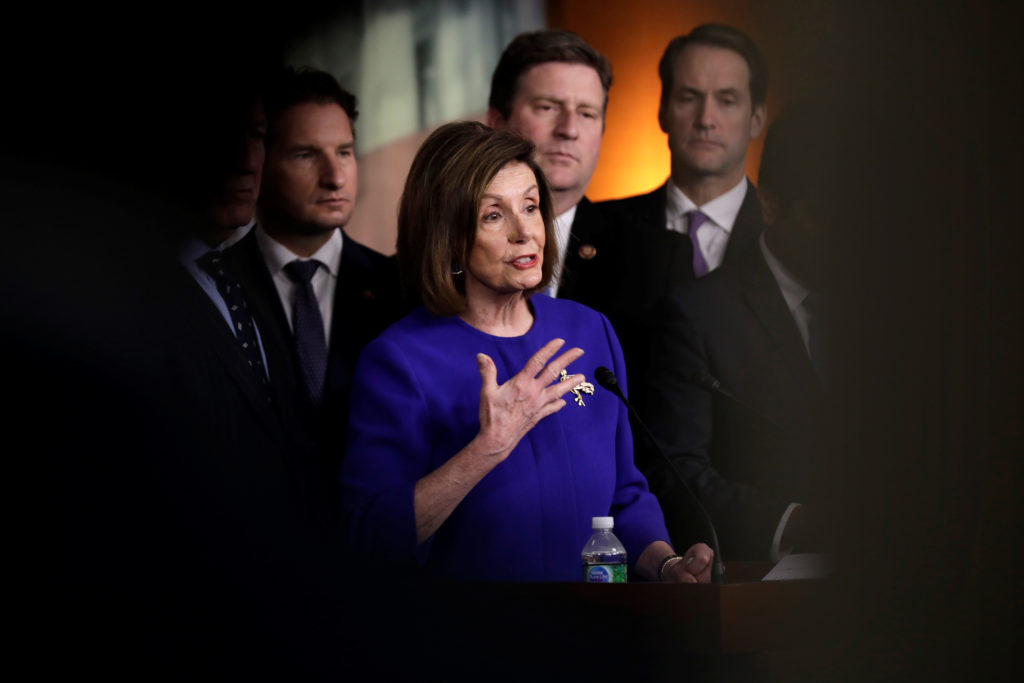 The senators running for president — including two leading candidates, Sens. Elizabeth Warren and Bernie Sanders — could lose crucial time on the campaign trail if the trial drags on and buts up against the first primary contests in February. Any speeches Warren and Sanders give on the Senate floor in support of impeachment will surely be fodder for attacks ads by conservative groups and Trump’s reelection campaign.

Biden is also in danger of being dragged into the trial. Trump has said he wants Biden and his son to testify. Senate Majority Leader Mitch McConnell will control the trial, and it’s unclear if he shares Trump’s wish — or if the Senate can compel Biden to appear. The former vice president said earlier this month that he would not testify as a witness.

Regardless of whether Biden appears in person or not, the Senate trial will give Republicans a high profile venue to criticize him and his son’s role with Burisma.

During the last impeachment inquiry, in the late 1990s, House Republicans drew criticism for an investigation into President Bill Clinton that many Americans came to view as overly partisan. Clinton was only the second president to be impeached by the House — Andrew Johnson was the other, in 1868 — but he was acquitted by the Democratic-controlled Senate.

Perhaps with that history in mind, House Speaker Nancy Pelosi spent most of the year resisting calls to impeach Trump by the liberal faction of the Democratic caucus.

Pelosi argued there was little chance the effort would result in a conviction by the Senate, which is controlled by Republicans. In March, the speaker said impeaching Trump was “just not worth it” because the political fight would be too divisive.

The Democrats’ calculation shifted abruptly after a whistleblower raised concerns about a July 25 phone call between Zelensky and Trump, and what the whistleblower saw as White House efforts to conceal what was said on the call by placing notes of the conversation on a classified server.

In the conversation, Trump asked Zelensky to look into debunked conspiracy theories promoted by Giuliani that Biden and his son Hunter engaged in corrupt activities in Ukraine.

Trump articulated his request with a remark that has become arguably the most famous quote associated with the impeachment proceedings: “I would like you to do us a favor though.”

Pelosi formally launched the impeachment inquiry in late September, after news reports of the whistleblower complaint surfaced. Since then, Democrats have argued they had no choice but to hold the president accountable for holding himself above the law, regardless of the political consequences.

As the public hearings phase of the House impeachment inquiry ended, Democrats on the House Judiciary Committee insisted they were driven by a sense of public duty, not politics.

Republicans would not let them forget that the 2020 election is around the corner.