The majority of Americans think Congress should not begin impeachment hearings against President Donald Trump in light of the findings in special counsel Robert Mueller’s report, according to the latest poll from the PBS NewsHour, NPR and Marist. But nearly six in 10 Americans think questions about the president’s conduct still exist.

Fifty-three percent of U.S. adults in the poll, which was conducted as Attorney General William Barr’s prepared to testify before the House and Senate about Mueller’s investigation, said the report should not lead to impeachment hearings against Trump. Thirty-nine percent said Congress should begin impeachment hearings, and 8 percent were unsure. 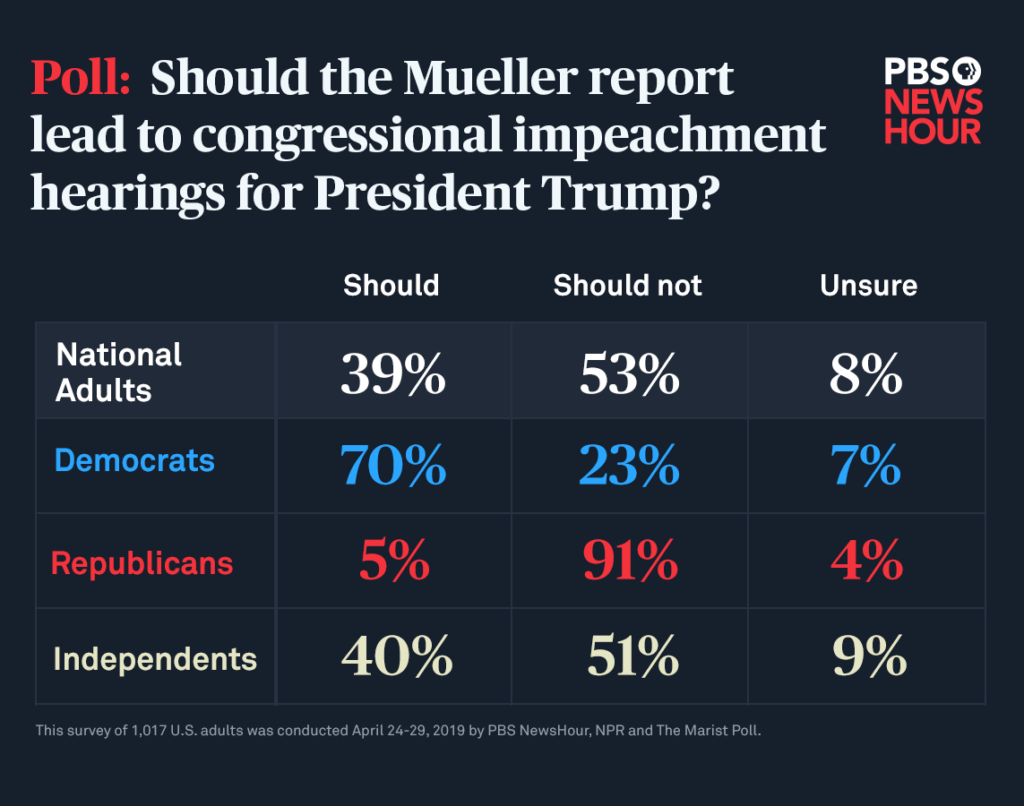 In the report, a redacted version of which was released in mid-April, Mueller said he did not find evidence that the Trump campaign conspired or coordinated with Russia, whose interference in the 2016 election was well-documented in the report and through public indictments of Russian officials and companies over the course of the last two years. The special counsel did not come to a conclusion on whether Trump obstructed justice by attempting to impede the investigation, though he did describe several instances in which the president tried to interfere with the probe.

Barr concluded there was not enough evidence in the report that Trump obstructed justice– a characterization with which Mueller reportedly disagreed.

In the PBS NewsHour-NPR-Marist poll, 33 percent of Americans thought the report cleared the president of any wrongdoing. But 58 percent said questions about his actions still exist.

Some legal scholars and Democratic lawmakers have argued that Mueller’s report can serve as a road map for how Congress should proceed, including potentially launching impeachment proceedings.

Most Democrats, at 56 percent, said Congress should continue its investigations into possible wrongdoing. When given the option of continuing investigations as an alternative to impeachment, among other options, only 27 percent said lawmakers should start impeachment proceedings against Trump.

The views of Democratic voters reflects a larger split in the party, especially among lawmakers in Washington. A handful of congressional Democrats and some 2020 presidential candidates have said Congress should begin impeachment proceedings. But others have argued Congress should continue the investigations into the president’s businesses, taxes and conduct in office already underway in the House and Senate.

The divide has created a political tightrope for House Speaker Nancy Pelosi and other Democratic leaders on Capitol Hill. Democratic presidential hopefuls are also in a bind, as they seek to build support with the party’s progressive base without alienating moderate voters, whose support is crucial in a general election.

“The further you go down the impeachment path at this point, the happier your Democratic base will be,” said Lee Miringoff, who directs the Marist Institute for Public Opinion.

President Donald Trump also faces his own hurdles to reelection, the PBS NewsHour-NPR-Marist poll shows. A majority of voters, 54 percent, said at the moment, they would definitely vote against the president in the 2020 election. In April 2011, at a similar point in President Barack Obama’s first term, 44 percent of voters said they would definitely vote against Obama, according to a Marist poll at that time.

A majority of Americans, 54 percent, approve of the way Mueller did his job.

Overall, a majority of Americans, 54 percent, approve of the way Mueller did his job; 57 percent said the special counsel’s investigation was “fair.” Trump’s message that Mueller’s investigation unfairly targeted him, a refrain that has continued after the report’s conclusion, does not appear to be resonating with a majority of Republican voters. Forty-seven percent of Republicans said they approved of the job Mueller did as special counsel, compared to 38 percent who disapproved.

As both Republicans and Democrats determine how to proceed, they could take a lesson from history about shifts in public opinion.

“One way or another, it’s going to take a lot more than the current Mueller report and interpretations of it to push things further,” said Robert Shapiro, a political science professor at Columbia University who studies public opinion.

On the other hand, if Democrats move too fast without public support, they run the risk of losing support with the public, something Republicans experienced during the Clinton impeachment saga. Republicans lost five House seats in the 1998 midterm elections. The results were widely seen as a rebuke of the GOP and a show of support for Clinton, given that the president’s party tends to see losses in midterms.

Lawmakers could also be giving too much weight to the Mueller report.

Fifty-three percent of voters in the poll said the report will not be a significant issue for them in the 2020 election. That includes 76 percent of Republicans, 35 percent of Democrats, and 50 percent of independents.

“There are a lot of issues that affect the country more directly that are more important when it comes to electing the president,” said Danielle Vinson, a politics professor at Furman University.

Left: The Mueller report indicated there was no evidence President Donald Trump coordinated with Russia during the 2016 election, but the special counsel did not come to a conclusion on the question of obstruction of justice. Photo by Joshua Roberts/Reuters

Across the country, 2020 Democrats appeal to working-class voters