In battle for the Senate, Georgia organizers fight to mobilize voters of color

Grassroots organizations across Georgia energized a diverse coalition that led to record turnout and helped President-elect Joe Biden flip the state from red to blue. Many of these organizers are pushing for a large turnout again ahead of two runoff races in January that will determine control of the Senate.

Those working to mobilize infrequent and underrepresented voters across Georgia will confront language barriers, misinformation and voter fatigue in their efforts to maintain November’s momentum for the runoffs, which typically see a drop off in participation from general elections.

If Democrats win both seats, they would take control of the Senate and give Biden a friendly Congress that will allow him to enact his policy agenda. But Democratic candidates in particular face more challenges turning out voters for runoff races due to socioeconomic factors as well as voting access, said Joseph Crespino, a professor of political and cultural history at Emory University.

For Susana Durán, Georgia State director for the civic engagement group Poder Latinx, informing voters about the race starts with the basics.

“What is a runoff? There’s no Spanish language word for runoff,” Durán said. “I’m trying to figure out the shortest way to explain what a runoff is without having the voters run off.”

Poder Latinx currently operates in Georgia, Arizona and Florida; the bulk of the Georgia team’s work focuses on calling voters to answer their questions about the races and the voting process. The state began distributing absentee ballots for the runoff on Nov. 18, the deadline to register to vote in the runoff is Dec. 7 and early in-person voting begins on Dec. 14. There’s a lot of confusion, Durán said, about how to request absentee ballots or why people need to vote again so soon after the general election. Between now and the Jan. 5 election, the group is aiming to make 330,000 calls to potential voters.

“What is a runoff? There’s no Spanish language word for runoff.”

The lack of language options on voting materials provided by Georgia counties can also be a barrier for some communities, said Stephanie Cho, executive director for Asian Americans Advancing Justice-Atlanta, a nonpartisan organization.

Only two of Georgia’s 159 counties — DeKalb and Gwinnett — provide election materials in both English and Spanish.

Gwinnett County began offering Spanish materials and ballots in 2016, after meeting a threshold set by the federal Voting Rights Act, which requires localities to provide additional language materials once the number of voting age citizens in the county who speak a given language reaches 10,000, or more than 5 percent of the voting age population. Dekalb started providing materials in Spanish and Korean voluntarily at the end of October.

To fill in the language gap for other communities, Poder Latinx conducts many of its calls to voters in Spanish. Asian Americans Advancing Justice distributes its own materials in seven Asian languages and plans to provide assistance to voters at polling locations.

“On early voting day, [December] 14th and the 15th, we’re treating it like Election Day. We’re going to be out in full force with election protection volunteers and interpreters just because we know that people are going to want to vote early,” Cho said.

These challenges come as Georgia undergoes significant demographic changes, particularly in the Atlanta suburbs, where Democrats have flipped two House seats in the last two years.

READ MORE: In Georgia, can Biden’s winning coalition deliver the Senate to Democrats?

Overall Georgia’s population grew from about 8.2 million people in 2000 to 10.5 million in 2018. The Atlanta metropolitan area added 733,646 residents between 2010 and 2019, according to Census data, driven by a surge of new Latino, Asian and Black residents.

About 92 percent of Black voters and 59 percent of Latino voters in Georgia supported Biden, according to survey data from the Associated Press. AP does not have Georgia-specific data for Asian voters, but found nationally that 70 percent of them supported Biden.

For example, Biden expanded on Clinton’s 2016 victory in Gwinnett County by more than 12 percentage points. In Gwinnett people of color went from comprising about 33 percent of the county population in 2000 to roughly 64 percent of the population by 2018. Biden beat Trump in Cobb County by a 14-point margin compared to Clinton’s 2.2-point advantage. In Cobb County, people of color accounted for 31 percent of the population in 2000, a number that grew to 48 percent in 2018. Before 2016, these counties had supported Republican presidential nominees for many years.

Biden’s expansion is the result of demographic changes as well as efforts by the Democratic Party and local organizations to connect with voters and push for equal voting access, said Andra Gillespie, a political science professor at Emory University in Atlanta.

Former Georgia gubernatorial candidate Stacey Abrams, who founded the groups New Georgia Project and Fair Fight, is one leader who has pushed to register and educate voters on political issues in recent years, Gillespie said. 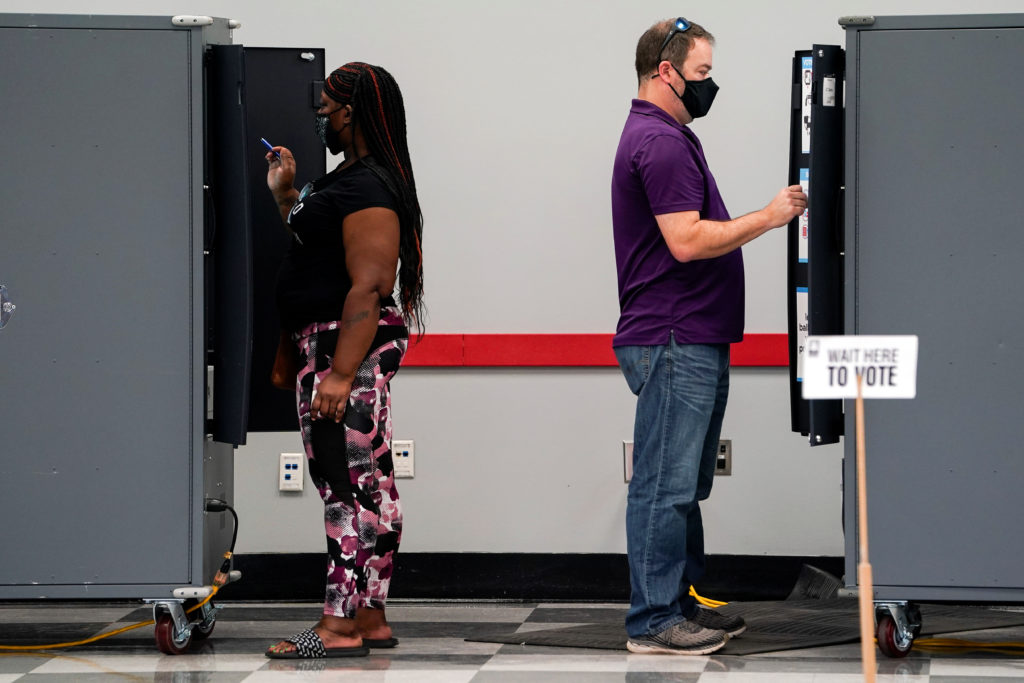 Biden relied on attacking Trump, King said, and that is a message that won’t help the Senate candidates. “It is not a message that resonates with the state of Georgia as a whole,” she added.

In the general election, Democrat Jon Ossoff got fewer votes than Republican incumbent Sen. David Perdue, but because the state requires one of the candidates to receive a majority — more than 50 percent of the vote — their race went to a runoff. Ossoff had received 47.9 percent of the vote to Perdue’s 49.7 percent.

In the other Senate race, a special election, Raphael Warnock won the plurality of votes, with 32.9 percent of total votes, in a deep field that included other Democrats and Republicans. Sen. Kelly Loeffler, who is running her first race after being appointed in 2019 to fill a seat left vacant by retiring Sen. Johnny Isakson, won 25.9 percent of the vote. In a race with eight Democratic candidates, six Republican candidates, and six third-party candidates, about 2,378,567 votes, or 48.4 percent, went to Democrats. Republican candidates received a combined 2,422,796 votes, or 49.3 percent.

Despite a strong performance in the general election,the effort to take control of the Senate will be an uphill battle for Democrats.

In order to win both races in January, Democrats are looking to recreate Biden’s multiracial, suburban coalition from November while also reaching out to people who may not have voted in the Senate race at all.

Among November’s voters, Biden received nearly 100,000 more votes than Ossoff did, suggesting that some voters either chose a Senate candidate from a different party, or skipped voting in that Senate race altogether, leaving it blank on their ballots. Trump received 780 fewer votes than Perdue overall, and saw support from 36 percent of the state’s Latino voters, two percentage points less than the senator.

Daniel Garza, president of the Koch-family funded group Libre Initiative, believes Perdue has an opportunity to expand his reach to Latino voters, given their diversity of experiences and political interests. Pew Research Center data from 2018 and 2019 indicates that a larger share of Latino voters tend to identify or lean Republican (29 percent), compared to Black voters (10 percent) and Asian voters (17 percent).

“I think [Latinos are] tired of being told that they should submit to big government orthodoxy or to groupthink,” Garza said, noting that conservative Latinos face pressure to vote for Democrats, particularly from white liberals. “I think this is causing a shift in political preference.”

Garza advises Libre Initiative’s political action committee, Libre Action, which supported Republican Senate incumbents in Colorado, North Carolina and Texas in the general election. The group has since moved its resources to Georgia to mobilize Latino voters for Perdue. Libre Action’s approach is a mix of targeted outreach through voter research and making the case to Latino voters that Perdue aligns with the issues they care about, like school choice, taxes and job opportunities, Garza said.

Nse Ufot, CEO of the Abrams-backed New Georgia Project, says her team is also talking to people about how control of the Senate can directly influence their lives when it comes to things like pandemic economic relief funding or climate change protections. The group looks for creative ways to reach voters that candidates might miss, she added.

PODCAST: A grandmother, a granddaughter and a deep post-election divide

New Georgia Project holds “Twitch the Vote” events, reaching young voters with speakers and musical performances on the live stream gaming platform Twitch. On Nov. 19, Abrams made a virtual appearance to speak about the runoff races during a battle between rappers Jeezy and Gucci Mane hosted by Verzuz, a music series launched in March.

Ufot said her organization’s approach leading up to the Jan. 5 runoffs looks much the same as it did leading up to Nov. 3. She’s hoping that Democratic victories in the Senate races will show that Biden’s Georgia win “is not a fluke.”

Umer Rupani of the nonpartisan Georgia Muslim Voter Project said he speaks with voters about how the elections could affect education, health care access or their small businesses, among other issues, and is coordinating with local mosques and other groups ahead of January to launch a voter education platform.

“I think drawing that line to say ‘a senator does X and it affects you in this way’ — that’s what got everyone out to vote in November and it’s going to get them to continue to engage,” Rupani said.

Every election comes down to turnout, and after an election in which every state in the country increased turnout compared to 2016, the Senate races in Georgia will come down to which party and candidates are better able to mobilize voters — especially those who historically have been less likely to participate.

Left: A voter waits in line to cast her ballot during early voting for presidential election inside of The Atlanta Hawks' State Farm Arena in Atlanta, Georgia. Grassroots organizers across the state are now pushing for large turnout in two runoff races that will determine control of the Senate. File photo by REUTERS/Chris Aluka Berry.