DES MOINES, Iowa — Rachel Lunsford was looking forward to an evening out. A government worker with a one-year-old at home, Lunsford rarely gets free time to socialize on weeknights.

But for Lunsford, an Iowa Democrat who is closely following the 2020 election, the idea of a night out on the town did not involve getting a drink or dinner. Instead, it meant meeting up with her book club, which is making its way through all the memoirs written by the growing list of Democratic presidential candidates.

Lunsford usually prefers reading long articles to books, but she’s trying to stick to the group’s rules: finish one candidate’s book every three weeks, and then pose questions directly to the presidential hopeful if they agree to speak to the club in Des Moines.

So on a recent Tuesday evening, Lunsford crowded into a classroom in the student union building at a local university with about 150 other people to hear Julian Castro, a former secretary of the Department of Housing and Urban Development, answer questions about his book, “An Unlikely Journey.”

Afterwards, Lunsford praised the “fluid, elegant writing style” of Castro’s book, which he published three months before launching his presidential campaign in January. “It really spoke to me,” Lunsford said in an interview. “It was one of those books that I found difficult to put down just because it was a really compelling story.”

‘By reading [their books], I actually get to pay attention to candidates that maybe aren’t even on the radar.’

Before taking up his book, Lunsford hadn’t paid much attention to Castro’s campaign. Lunsford said when she was called earlier this year by a news organization conducting a preference poll on the crowded Democratic primary field, which includes more than 20 candidates, Castro’s name wasn’t even mentioned. (He is averaging just one percent in Iowa in the Real Clear Politics polling average, but has qualified for the first two Democratic debates.)

“By reading [their books], I actually get to pay attention to candidates that maybe aren’t even on the radar,” Lunsford said. “I feel like I could caucus for him if the caucus was held today,” she said of Castro.

It’s that exposure to potential caucus-goers that’s making the candidates take notice of the book club. The group now has 800 members — about 500 of which are in-state. Two of the first three candidates on the reading list, including Castro, appeared in person to take questions from the group. The third, Sen. Cory Booker, D-N.J., answered questions from the club over the phone.

The conversations so far have followed a similar format, with candidates answering a lighthearted ice-breaker question that the club’s members agreed to in an online vote: “What’s your favorite book?”

Castro listed several books, including “The Exorcist” and “The Godfather,” which he said is “better than the movie.” South Bend Mayor Pete Buttigieg named James Joyce’s “Ulysses” – “not beach reaching,” he admitted – as his favorite when he showed up less than two weeks later. Booker chose James Baldwin’s book of essays on race and religion, “The Fire Next Time.”

But this isn’t your average book club. In their conversations with the candidates, the club’s members have also asked detailed questions ranging from education to foreign policy. That’s one thing that makes the book club’s founder, Andrea Phillips, proud of the project.

“It just shows how seriously Iowans take their role, that they feel the need to get to know the candidates on a deeper level,” Phillips said. 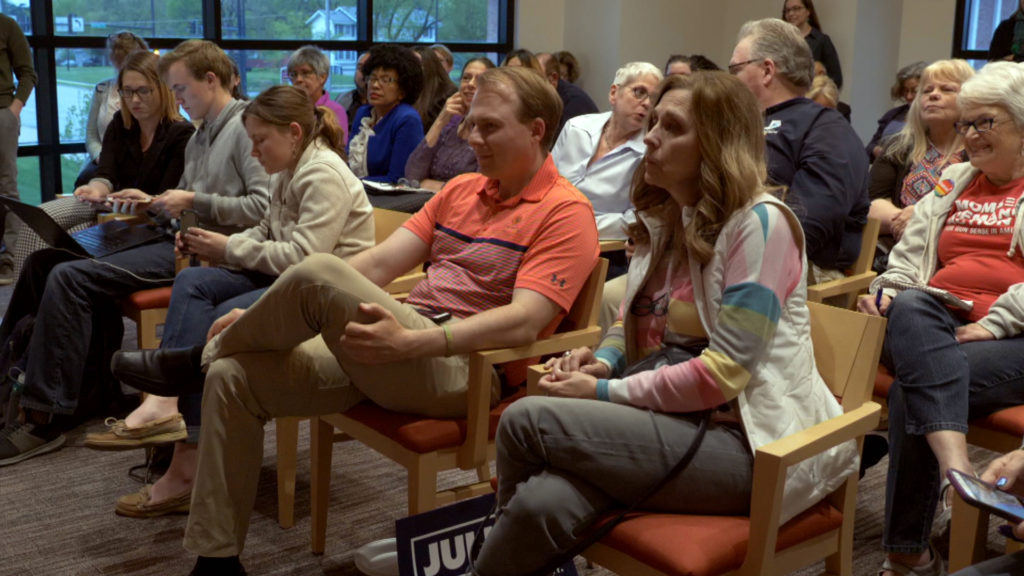 Members of a book club in Iowa at a recent meeting. The club is reading the memoirs of every Democratic contender. Photo by Matt Loffman/PBS NewsHour

The book club’s membership has also grown past the borders of the state. During the club’s recent conversation with Buttigieg about his book, “Shortest Way Home”, people gathered to watch the discussion, which was streamed live online, at a house party in Portland, Oregon, more than 1,500 miles away.

The club started with a tweet. Phillips wanted to share a picture of herself curled up on the couch with her dog, reading a book in front of the fireplace. But she had a problem: she was reading Buttigieg’s memoir, and as the vice chair of the Iowa Democratic Party, she was concerned the picture would suggest she was favoring one candidate over the others.

Phillips said she remembers thinking to herself, “I’m going to read all the books anyway. Why don’t I just make it a book club?” But gaining so many members in just a few months, and having some of the candidates show up to take questions, is beyond anything the club’s founder imagined.

Gaining so many members in just a few months, and having some of the candidates show up to take questions, is beyond anything the club’s founder imagined.

The idea of getting to know the candidates through their writing attracted Ann Rezarch, a Democrat who moved to Des Moines from California 20 years ago, to the book club. With such an ambitious timeline — to get through all the books, members are supposed to read hundreds of pages every few weeks — Rezarch said she’s doing her best to keep up. Rezarch tries to read at least part of every book, or listen to the audio version.

Like many of her fellow members, Rezarch joined the book club with an open mind about which candidate she would end up supporting, as well as a healthy skepticism about the motivations behind their books.

“They’re strategic when they write these books. They’re not just coming from a desire to write,” Rezarch said. “I want people to say what they want to say about what they think is important. I’d rather know that then them molding things to fit what I want.”

Rezarch, who retired two years ago and currently works part time as a mediator, has attended both in-person meetings with Castro and Buttigieg. Neither of their books have impressed her.

Buttigieg “does know how to write,” Rezarch said, and would likely make “the heart swell” of any English teacher who picks up his book. But said she’s just “not energized by his style.”

Her two-word review of Castro’s book: “Too predictable.” “I’m not quite sure that he’s being totally true to his roots and who he is,” she added.

Rezarch still has plenty of time for another candidate to excite her through their writing; the club has at least a dozen books left to read. Of the candidates remaining on the list, Rezarch and Lunsford are both looking forward to hearing from entrepreneur Andrew Yang, whose signature campaign proposal would give a universal basic income of $1,000 a month to every American aged 18 and older.

“I like different ideas. One of the problems that we have in our society, and certainly in politics, is that people are afraid to take risks or look at things differently,” Rezarch said. “The same old, same old is just doing us under.”

But with so many candidates in the race, Rezarch has a long time to wait to learn more about Yang. The book club is going through all the candidates alphabetically. Yang’s book, “The War on Normal People,” isn’t on the agenda until November — just three months before the Iowa caucuses.

Left: 2020 presidential candidate Julian Castro speaks to an Iowa book club at a recent gathering. Castro is one of three Democratic contenders who've talked to the group, which is reading every memoir published by the party's White House hopefuls. Photo by Matt Loffman/PBS NewsHour