In public hearing, Judiciary committee lays out its case against Trump

There is clear evidence that President Donald Trump committed impeachable offenses, House Democrats said Monday as they made their final arguments ahead of a key committee vote later this week.

Tensions ran high at the House Judiciary Committee hearing, with Republicans and Democrats sparring about the process and the facts uncovered so far in the impeachment inquiry into Trump. The hearing is likely the last public debate before the committee votes on whether or not to approve articles of impeachment, which are currently being drafted by lawmakers. If articles are approved by the committee, the full House could vote to impeach Trump next week.

Democratic and Republican lawyers can’t even agree on the facts

To House Judiciary Chairman Jerrold Nadler, D-N.Y., the evidence is clear: Trump committed impeachable offenses by withholding military aid and a White House meeting from Ukraine in exchange for an announcement of an investigation into former Vice President and 2020 presidential contender, Joe Biden. “The facts are not in dispute,” Nadler said in his opening remarks.

Barry Berke, the Democratic counsel for the House Judiciary Committee, and Daniel Goldman, his counterpart on the Intelligence panel, agreed. Both lawyers argued that the evidence against Trump is overwhelming. Their opening remarks echoed the conclusion drawn by several legal scholars who testified last week.

But Republicans are sticking to an entirely different story. Stephen Castor, the Republican counsel, said Democrats built a “baloney” case for impeachment based on “ambiguous facts” and “conflicting evidence.” Nothing Trump did, Castor said, proved he was trying to pressure Ukraine to announce an investigation into a domestic political rival.

The competing interpretations of reality illustrate just how divided Congress has become. It’s no surprise, at this point in the impeachment proceedings, that Democrats and Republicans still disagree on whether or not Trump should be impeached. But the parties disagree on the basic facts. And as the inquiry continues, the disagreements are only getting more personal.

Republicans slammed House Intelligence Chairman Adam Schiff, D-Calif., for not testifying Monday about his committee’s report on the impeachment investigation. Instead Goldman appeared to present the report, which concluded that Trump committed impeachable offenses and obstructed the investigation.

“Where’s Adam? Where’s Adam?” Rep. Doug Collins, R-Ga., the top Republican on the House Judiciary Committee said of Schiff. Rep. Jim Sensenbrenner, R-Wisc., accused Schiff of hiding behind Goldman and choosing not to “man up and come here and talk.” 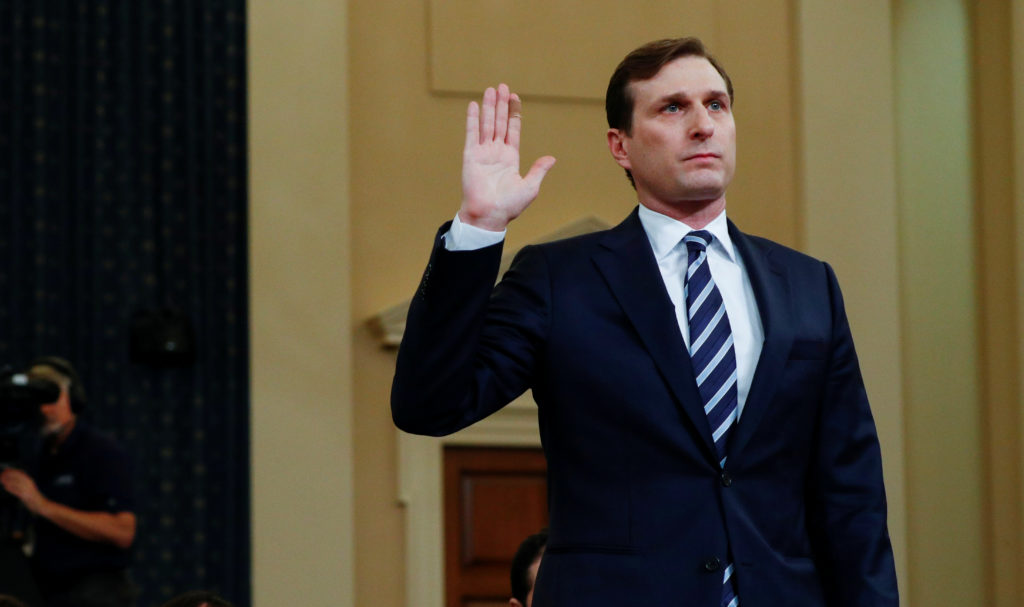 Democratic staff counsel Daniel Goldman is sworn in to testify during the House Judiciary Committee hearing on Capitol Hill on December 9, 2019. Photo by Tom Brenner/Reuters

Schiff also came under fire for including calls by Rep. Devin Nunes, R-Calif, the ranking Republican on the House Intelligence panel; Rudy Giuliani, the president’s personal attorney; and a journalist in his report. The Democrats found that Nunes — one of Trump’s most vocal allies in Congress — spoke with Lev Parnas, a Ukrainian businessman and Giuliani associate who has been indicted for campaign finance violations.

Goldman argued the phone records were relevant to the investigation. But under questioning from Collins, Goldman declined to say who ordered the information to be included in the report, giving Republicans an opening to portray Democrats as overly political.

Publishing Congress members’ private phone calls crossed a line, Sensenbrenner said. “That I think is an abuse of power,” he said, adding, Democrats “should be ashamed of themselves.”

Republicans continue their complaints over process

In addition to criticizing Schiff, Republicans spent a significant portion of the hearing criticizing the investigation process. GOP lawmakers made countless parliamentary moves that slowed down the hearing. They complained about the House rules governing the impeachment inquiry — including Nadler’s decision to have Berke both testify before the committee and question lawmakers from the dias as majority counsel.

Berke’s performance created strange optics for the Democrats, who appeared to give themselves the role of both judge and jury.

But the most frequent GOP complaint — that Democrats were blocking “fact witnesses” from testifying — stretches credulity. As Democrats noted in the House Intelligence report and repeatedly on Monday, the White House blocked numerous officials from speaking to impeachment investigators. Goldman said the House Intelligence Committee did not receive any of the documents it requested. “It was a complete stonewall,” he said.

The impeachment investigation is ramping up speed in the House, and could culminate with a floor vote next week. Nadler began Monday’s hearing by defending the timeline. Trump welcomed Russian meddling in the 2016 election, and solicited Ukrainian interference in the 2020 election, Nadler said. If Democrats don’t act now, the president will seek more foreign interference in the upcoming election

“The integrity of our next election is at stake. Nothing could be more urgent,” Nadler said. He pointed out that the July 25 phone call in which Trump asked Ukrainian President Volodymyr Zelensky to investigate Biden came just one day after special counsel Robert Mueller testified before Congress about his final report, which found that Russia interfered in the 2016 election in Trump’s favor. Democrats have long argued the timing proves Trump believed he was above the law.

GOP lawmakers complained Monday that the Democrats were trying to impeach Trump as quickly as possible — after searching for reasons to remove the president from the moment he took office. Collins and other Republicans also said House Speaker Nancy Pelosi’s decision last week to move forward with articles of impeachment proved Democrats had already made up their minds.

Did Hunter Biden have a conflict of interest in Ukraine? Democrats won’t say.

Once again, Democrats avoided saying whether or not they believed Biden’s son, Hunter Biden, should have served on the board of the Ukrainian gas company Burisma while his father was vice president. Castor noted that several witnesses said Hunter Biden’s work for Burisma presented a possible conflict of interest. The younger Biden himself acknowledged in an ABC interview in October that serving on Burisma’s board was probably not a good idea.

And yet Democrats never raised the issue. Part of their reluctance likely comes from trying to avoid lending credence to the debunked theory that the Bidens had corrupt business dealings in Ukraine, or that Ukraine interfered in the 2016 U.S. presidential election. Part of it also likely comes from a reluctance to criticize the family of one of the party’s leading 2020 presidential candidates.

Still, refusing to even acknowledge a potential appearance of a conflict of interest undercuts the anti-corruption message at the heart of the Democrats’ impeachment investigation. They may successfully avoid the issue in the House, but that could prove harder once the impeachment moves to the GOP-controlled Senate, where Republicans will control the trial.