WASHINGTON — They long for what’s being lost: the ability to publicly question officials at committee hearings, to chat across the aisle, to speak from the House and Senate floor for all of America, and history, to hear.

Congress wants its voice back.

With no real plan to reopen Capitol Hill any time soon, the coronavirus shutdown poses an existential crisis that’s pushing Congress ever so reluctantly toward the 21st century option of remote legislating from home.

“It’s the ability to be an equal branch of government,” said Rep. Katie Porter, a freshman Democrat from California.

Divisions are fierce, but so too is the sense of what is being lost. Every day lawmakers shelter at home, their public role is being visibly diminished. While they are approving record sums of virus aid, they are ceding authority to oversee the effort and tackle next steps.

It’s an imbalance of power for all to see: President Donald Trump’s daily public briefings without a robust response from Capitol Hill, though there have been discussions within the White House about changing the format of the briefings to curtail his role.

“This is a time where oversight is really important,” said Rep. Derek Kilmer, D-Wash., a leader of the moderate New Democrats caucus.

The pandemic “begs for Congress’s engagement, virtual or otherwise,” he said.

Changing the rules to allow lawmakers to cast votes or hold hearings from home would be unprecedented in House and Senate history. The Constitution requires lawmakers be “present” for most action. 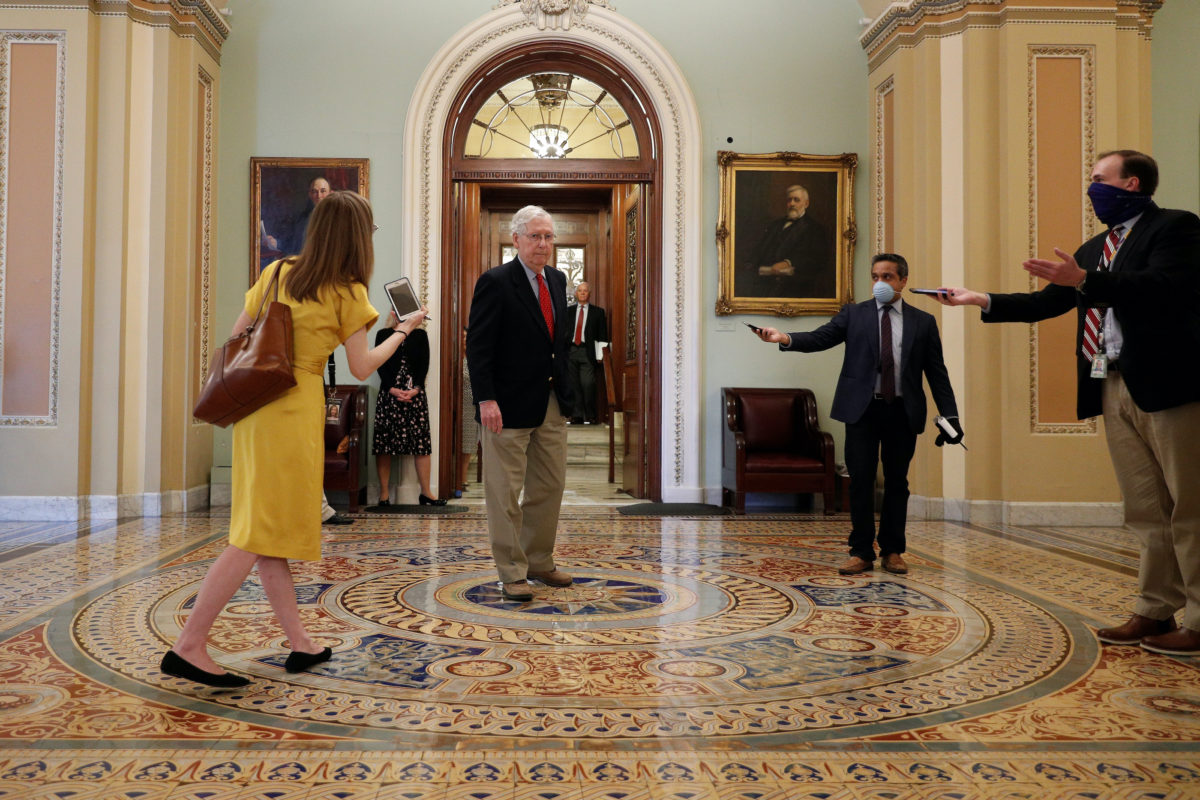 The simmering debate cuts across political fault lines. Some lawmakers want to stick with tradition; others are tech-savvy and ready for change. A vocal band of conservatives insists Congress must reopen now, despite public health warnings, echoing Trump’s push to end the shutdown. Others have no interest in returning to the crowded Capitol complex until it’s safe.

House Speaker Nancy Pelosi, D-Calif., shelved a proposal for proxy voting this past week after Republicans objected. Once resistant to what she called “Congress by Zoom” meeting, she tapped a bipartisan task force to present fresh ideas.

In the Senate, Majority Leader Mitch McConnell, R-Ky., rejected a GOP remote vote proposal. He expects Congress to return May 4, as planned.

The reluctance to change is leaving the legislative branch behind after even the tradition-bound Supreme Court announced it would hear oral arguments by teleconference as stay-home rules reorder civic life.

“It’s a huge can of worms,” said Sarah Binder, a professor at George Washington University.

She said the pandemic provokes a set of issues far beyond the logistics of working remotely. Among them: Is it safe to return to Capitol Hill? Can you be “present” if you appear on a computer screen?

But she said, “They need a solution if they’re not going to be able to come back.”

Lawmakers say they can only do so much on conference calls and virtual town hall meetings as they assess $3 trillion in coronavirus aid and consider annual spending, defense and other bills.

While the 100 senators can usually command attention on their own, the 435 rank-and-file House members have a harder time being heard.

One prime opportunity is time allotted to lawmakers at committee hearings.

It may be just five minutes on C-SPAN. But for members of Congress, the committee means everything. It’s their chance to make a difference.

Porter knows firsthand what’s being lost with Congress away.

As the pandemic emerged, she wrote a letter asking the Centers for Disease Control and Prevention to provide free virus testing as country scrambled to slow the spread of COVID-19.

But when CDC Director Dr. Robert Redfield appeared before the House Oversight and Reform Committee, Porter had her moment.

In a video that went viral, she grilled Redfield on whether he would commit to invoking authority under federal law to declare pandemic testing free.

“It wasn’t until we got Dr. Redfield in front on me, and I had my five minutes with the cameras on him, in front of the American people, that I was able to get an answer,” she said.

But under House rules, committees usually need members to be physically present to meet. While several committees have been conducting briefing calls with key administration officials, it’s mostly out of public view.

The House Small Business Committee confirmed a private call this past week with the head of the Small Business Administration running the coronavirus paycheck program. The Appropriations Committee held one with Agricultural Secretary Sonny Perdue. Treasury Secretary Steven Mnuchin has had calls with other committees.

The House Oversight and Reform Committee was set for a briefing with the Census Bureau’s director about curtailing the 2020 population count during the pandemic. It’s a crucial conversation with billions of federal dollars at stake. But the public could not watch.

Still, some say the only way for Congress to act is for lawmakers to return to Washington during the pandemic. Conservative House Freedom Caucus members rallied this past week to reopen the Capitol. Key GOP senators agree.

As the House considers options, one advocate for remote legislating is Majority Leader Steny Hoyer, D-Md., who enjoys FaceTime with his grandkids and suggests Congress could do the same.

Opening committees is the priority, he told reporters after the task force met. “We need committees to act,” he said. “Even if they can’t come to Washington.”

Hoyer acknowledged how difficult it is for Congress to change. Even during the 1918 Spanish flu outbreak, the House convened to vote. But this is an “extraordinary circumstance,” he said. He expects an update this coming week.

Porter warns that without changes the 535-member legislative branch is being distilled to its most visible leaders — “a four person Congress,” she said.

“Technology is not disruptive to the Founders’ idea,” she said.

“It’s limiting the technology that is consolidating power in a small number of people,” she said, “which is what they were worried about when they created the House of Representatives.”

Left: U.S. Speaker of the House Nancy Pelosi (D-CA) wears a face mask as she walks to the House Chamber ahead of a vote on an additional economic stimulus package passed earlier in the week by the U.S. Senate, on Capitol Hill in Washington, U.S., April 23, 2020. Photo by Tom Brenner/Reuters.