India to bring supplies to Kashmir; Pakistan to go to UN

NEW DELHI — Authorities enforcing a strict curfew in Indian-administered Kashmir will bring in trucks of essential supplies for an Islamic festival next week, as the divided Himalayan region remained in a lockdown Saturday following India’s decision to strip it of its constitutional autonomy.

Pakistan said that with the support of China, it will take up India’s unilateral actions in Kashmir with the U.N. Security Council and may approach the U.N. Human Rights Commission over what it says is the “genocide” of the Kashmiri people.

Kashmir is claimed in its entirety by both India and Pakistan and is divided between the archrivals. Rebels have been fighting New Delhi’s rule for decades in the Indian-controlled portion, and most Kashmiri residents want either independence or a merger with Pakistan.

The indefinite 24-hour curfew was briefly eased on Friday for weekly Muslim prayers in some parts of Srinagar, the region’s main city, but thousands of residents are still forced to stay indoors with shops and most health clinics closed. All communications and the internet remain cut off.

On Thursday, Prime Minister Narendra Modi assured the people of Jammu and Kashmir, as the state is known, that normalcy would gradually return and that the government was ensuring that the current restrictions do not dampen the Islamic festival of Eid al-Adha on Monday. 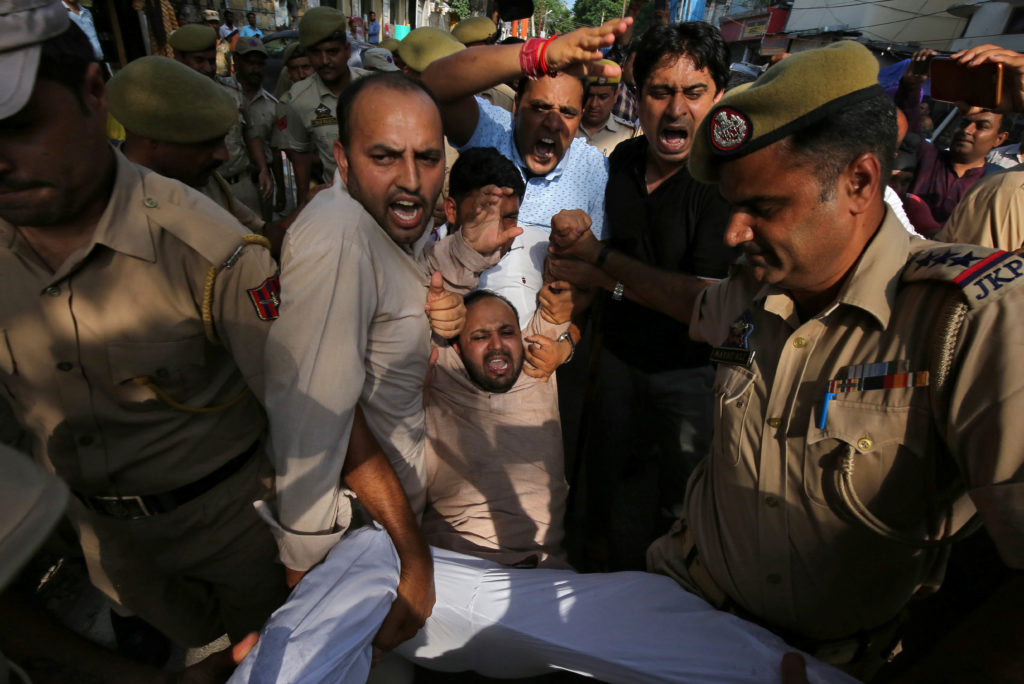 A supporter of India’s main opposition Congress party reacts as he is detained by police during a protest against scrapping of special constitutional status for Kashmir, in Jammu August 10, 2019. Photo by Mukesh Gupta/Reuters

New Delhi rushed tens of thousands of additional soldiers to one of the world’s most militarized regions to prevent unrest and protests after Modi’s Hindu nationalist-led government said Monday that it was revoking Kashmir’s special constitutional status and downgrading its statehood. Modi said the move was necessary to free the region of “terrorism and separatism.”

The relaxing of the curfew in Srinagar was temporary, officials said. Friday prayers began at 12:37 p.m. and lasted for about 20 minutes, followed by protests in some parts of the city. Police used tear gas and pellets to fight back the protesters who gathered in their largest numbers since authorities clamped down and detained more than 500 political and separatist leaders.

Other stone-throwing incidents were reported from the northern and southern parts of Kashmir.

Authorities were closely watching for any anti-India protests, which will determine a further easing of restrictions for the Eid holiday.

The region’s top administrative official, Baseer Khan, said that essential commodities including food, grains and meat will be delivered to different parts of the region by Sunday.

In the meantime, most residents have been waking up before dawn to get food and other supplies stockpiled by neighborhood shopkeepers and pharmacists inside their homes. Shortly after dawn, police and paramilitary soldiers swiftly occupy the roads and streets as part of the restrictions on movement.

While some easing on the movement and opening of shops is expected around Eid, officials still held reservations about restoring mobile and internet services. Some relaxation of curbs on landline communication, however, could be considered, they said. 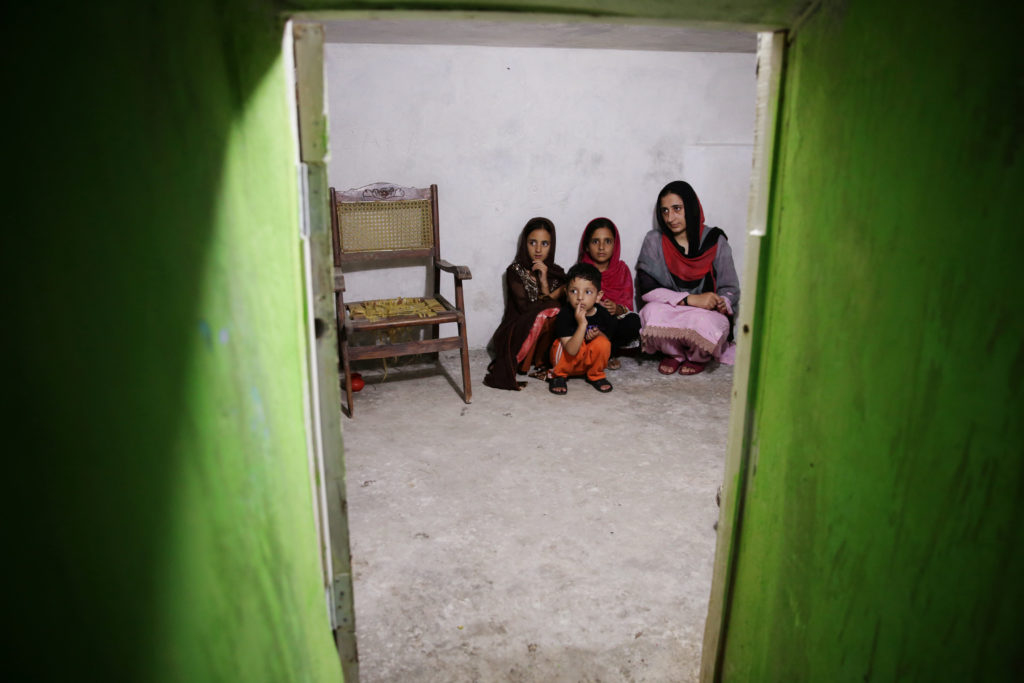 Ambreen Hannan and children sit in a bunker, an underground shelter build to hide from the shelling, at her home in Chakothi near the line of control (LOC) in Pakistan-administered Kashmir, August 7, 2019. Picture taken August 7, 2019. Photo by Saiyna Bashir/Reuters

Pakistani Foreign Minister Shah Mahmood Qureshi met with his Chinese counterpart and other top officials in Beijing on Saturday. He said that China fully supports Pakistan in taking the Kashmir issue to the U.N. Security Council.

He also said Pakistan is considering going to the U.N. Human Rights Commission over the situation.

“When a demographic change is made through force, it’s called genocide, and you are moving toward genocide,” he told reporters in Islamabad after returning from Beijing.

With India moving to erase the constitutional provision that prohibited outsiders from buying property in Jammu and Kashmir state, Indians from the rest of the country can now purchase property and apply for government jobs there. Some fear this may lead to a demographic and cultural change in the Muslim-majority region.

Qureshi said that India’s moves have increased the threat to regional peace and raised fears of bloodshed in Kashmir.

He also said that while Pakistan is not planning to take any military action, it is ready to counter any potential aggression by India.

Also Saturday, a regional political party from Kashmir petitioned the Supreme Court to strike down the government’s move to scrap the region’s special status and divide the state into two federal territories. The National Conference in its plea claimed the move was illegal. An opposition Congress party activist has already filed a petition challenging the communications blockade and the detentions of Kashmiri leaders.

Hundreds of migrant laborers from other Indian states also have fled in fear of unrest. Meanwhile, thousands of villagers living along the heavily militarized Line of Control dividing Kashmir between India and Pakistan have migrated to safer places in fear of artillery fire exchanges between the rivals.

The United States on Friday said that there has been no change in its policy on Kashmir, as Washington continues to regard it as a territory disputed between India and Pakistan.

In Islamabad on Friday, about 8,000 supporters of the Pakistani Islamist party Jamaat-e-Islami marched toward the Indian Embassy to denounce New Delhi’s action on Kashmir. Hundreds of activists held similar peaceful rallies across Pakistan.

Pakistan says it is considering a proposal to approach the International Court of Justice over India’s action. It also has downgraded diplomatic ties with New Delhi, expelled the Indian ambassador and suspended trade, train and bus services with India.

India’s External Affairs Ministry spokesman Raveesh Kumar asked Pakistan to reconsider its decision, but he also said it should accept the reality and “stop interfering in internal affairs of other countries.”

Left: Kashmiri residents throw stones towards Indian security forces during restrictions after the scrapping of the special constitutional status for Kashmir by the government, in Srinagar, August 10, 2019. Photo by Danish Siddiqui/Reuters