Trust in Trump sinks over COVID-19 as Biden support grows

If the 2020 presidential election were held today, 53 percent of registered voters would cast their ballot for former Vice President Joe Biden, putting him 11 percentage points ahead of President Donald Trump, according to the latest PBS NewsHour/NPR/Marist poll.

The poll, taken days before the Democratic National Convention, shows Biden with his widest lead yet. In February, before Biden had taken the lead in the Democratic primaries, 50 percent of U.S. voters said they would support Biden in a match-up between him and Trump, while 44 percent backed Trump. 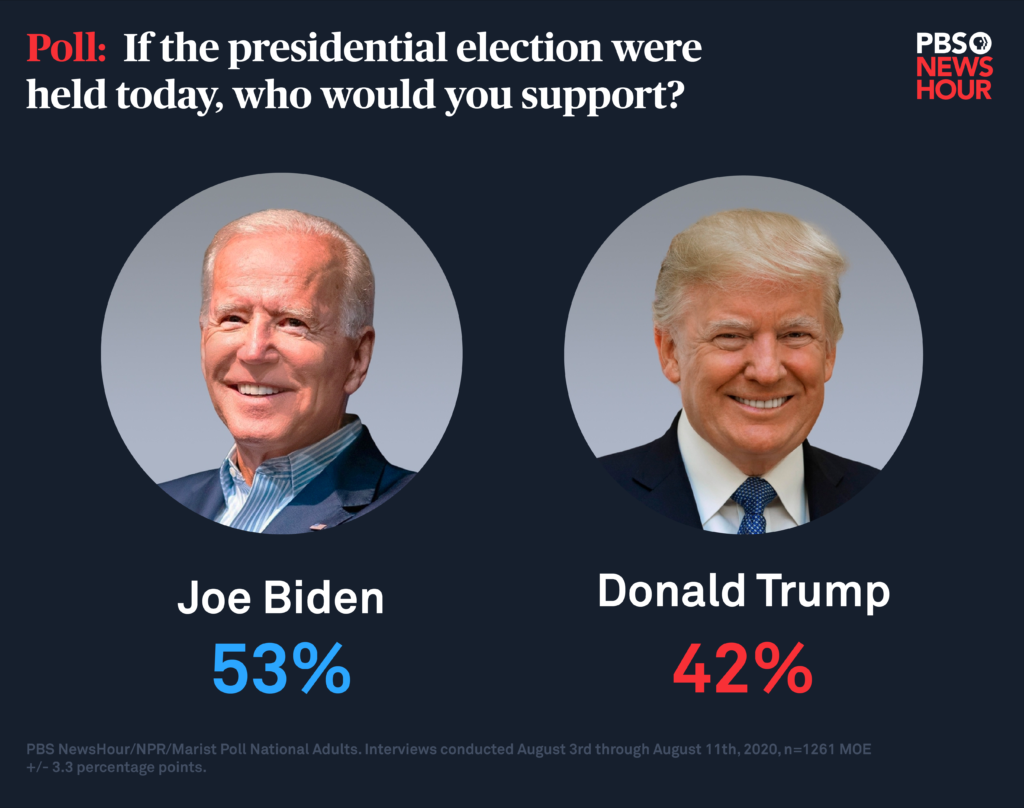 While polling shows less support for Trump overall, those who do want to see the president reelected were much more enthusiastic in their support than people who plan to vote for Biden. Despite strong poll numbers, that lack of enthusiasm could be a challenge for Biden in the fall, as the pandemic complicates the voting process for many Americans and he needs to motivate voters to turn out in key battleground states that Hillary Clinton lost in 2016.

The poll also highlights a major problem for the Trump campaign, which is that his numbers are consistently getting worse nearing the election. Trump’s approval rating sunk to 39 percent in the Aug. 13 poll, down from 42 percent in an Aug. 1 poll from Marist. “In this key month of August, he’s losing ground, that’s a disturbing downward arrow if you’re in the Trump campaign,” said Douglas Brinkley, presidential historian and professor of history at Rice University.

How COVID-19 looms over the 2020 presidential race

Trump’s sinking approval rating is due in part to his handling of the coronavirus pandemic. This month, the U.S. reached 5 million confirmed cases of COVID-19, more than any other country in the world, as states struggle to scale up to recommended levels for testing and contact tracing, and the daily death toll has rebounded to levels not seen since mid-May.

Fifty-three percent of U.S. adults think Biden would handle the coronavirus pandemic better than Trump, while 37 percent think Trump would do a better job. Another 5 percent don’t think either candidate has what it takes to manage the pandemic, and 5 percent more weren’t sure.

Regardless of who they think is best equipped to handle the crisis, most Americans are concerned by the pandemic, and many say it will factor into their decision in November. 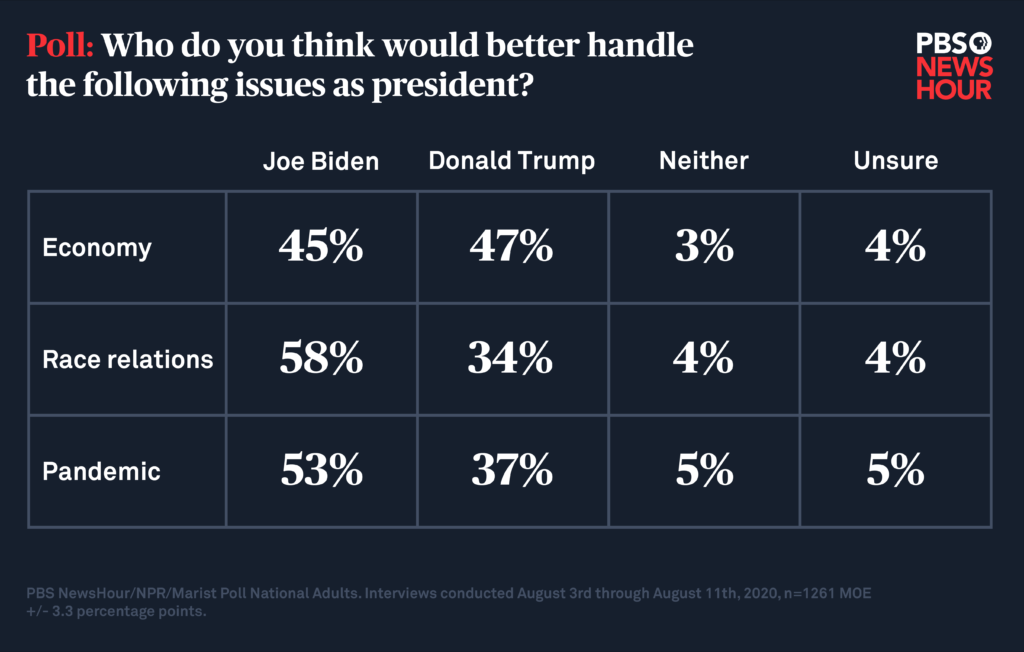 Seventy-one percent of U.S. adults said COVID-19 is a real threat, and 34 percent said the pandemic would be a major factor in deciding who they vote for in the presidential election, up from 14 percent in April.

Only 27 percent said the public health crisis has been blown out of proportion. Republicans were evenly split over whether concerns about coronavirus have been overstated, while far more Democrats and independents were anxious about the virus.

Five months since the World Health Organization declared COVID-19 a pandemic, people are losing faith in the usual authorities they would look to for critical information in a public health crisis. When asked whether they trust information about the coronavirus coming from the White House, the news media, local governments and health officials, Americans had the least trust in Trump and the most in public health officials, but overall trust has declined across the board since March.

The increasing skepticism comes after months of “so much discrepancy in messaging between elected officials and public health experts,” said Dr. Leana Wen, an emergency care physician and former commissioner of the Baltimore City Health Department. It is not too late for the country to come together, she said, but political leaders and health officials must share the same message so the public knows what to do safely.

“This is a time when we should be in this together,” Wen said. “Viruses don’t discriminate. This virus doesn’t care what your ideology is, and what you do also influences everybody around you, too.”

Distrust is affecting how people respond to the pandemic and whether they take precautions to protect themselves and others. Stories of Americans disregarding public health recommendations, refusing to wear masks or socially distance, have been making headlines for months. The nation’s foremost disease experts, including Dr. Anthony Fauci, have warned that without widespread adoption of such precautions, the virus will continue to spread unchecked.

Fauci has also said he feels confident that a COVID-19 vaccine will be available for all Americans in 2021. Multiple vaccines are being tested in U.S. clinical trials, and manufacturers are already producing supplies in case one of the candidates is proven safe for use. 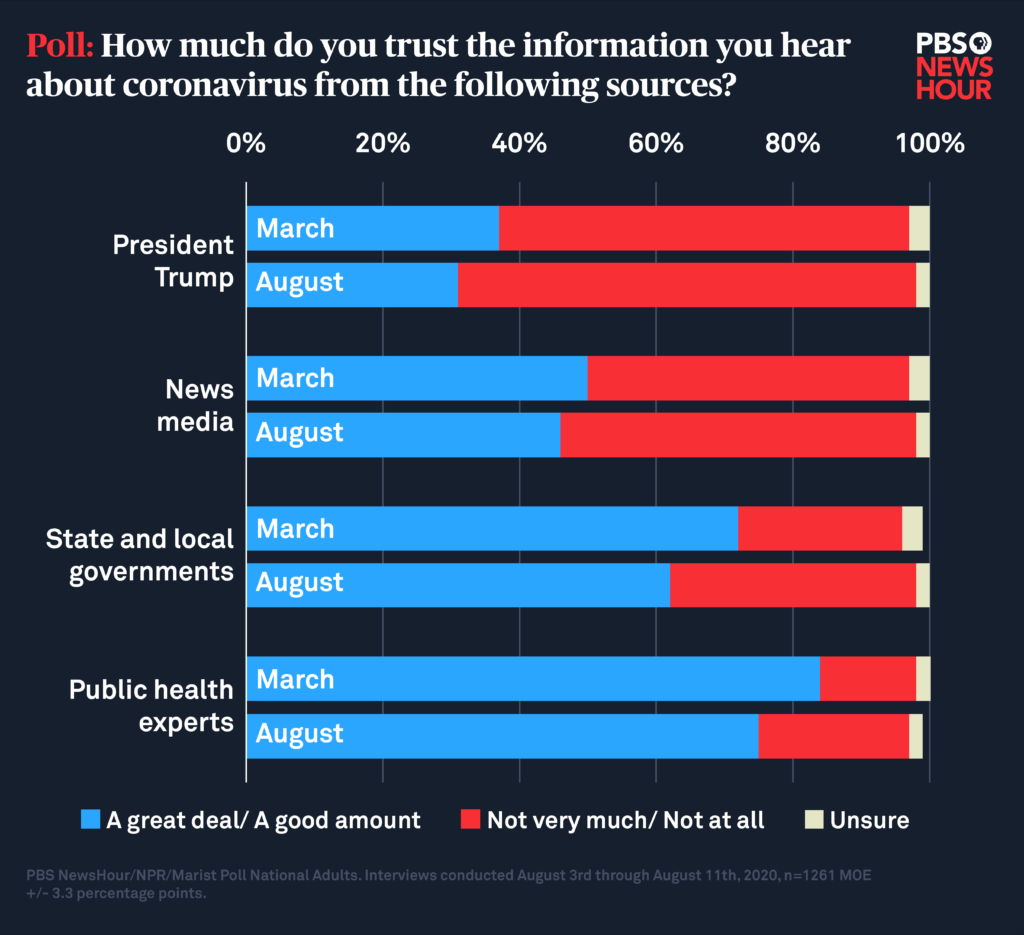 More Americans were on board with wearing masks, though there, too, Republicans were more split. Early in the pandemic, U.S. public health officials told people that masks were unnecessary. But as their virus knowledge grew, masks were shown to cut down on the spread of the virus, and that guidance changed. The Centers for Disease Control and Prevention now recommend all Americans wear face masks when in public, especially when indoors and where social distancing is not possible. But for many months after the CDC issued that guidance, Trump and other prominent Republicans refused to wear masks, sending mixed signals that resulted in some polarization on the issue along political lines.

Still, 74 percent of Americans in this latest poll thought it would be a good idea to pass a national mandate that would require people to wear masks in public places, and on Thursday, Biden endorsed such a measure. Nearly all Democrats and most independents support a mandate, while roughly half of Republicans do. Another 24 percent of U.S. adults think a nationwide mask mandate is a bad idea, including 40 percent of Republicans.

Who do Americans think is best suited to handle the economy?

Americans are split over how they think the presidential contenders would manage the economy. Whoever wins in November will be tasked with dragging the country out of its worst economic crisis since the Great Depression, restoring tens of million of jobs that evaporated during the pandemic. Forty-seven percent of U.S. adults think Trump is the person to take on that responsibility, while 45 percent believe Biden would do a better job.

“When we look at one-term presidents, it tends to be when the economy is faltering,” Brinkley said, pointing to President Jimmy Carter’s failed reelection bid amid historic inflation and jobless numbers and President George H.W. Bush’s 1992 loss against then-Arkansas Gov. Bill Clinton during a mini-recession.

In the months leading up to an election, economic conditions, such as job loss, income growth and the stock market, “are particularly important,” said Katherine Baicker, economist and dean of the Harris School of Public Policy at the University of Chicago. But this election “is such an unusual time” because a pandemic is unfolding while people contemplate their vote for president.

“It’s quite uncertain how much people will weigh their own economic conditions versus their fears about the handling of the health situation,” Packer said. 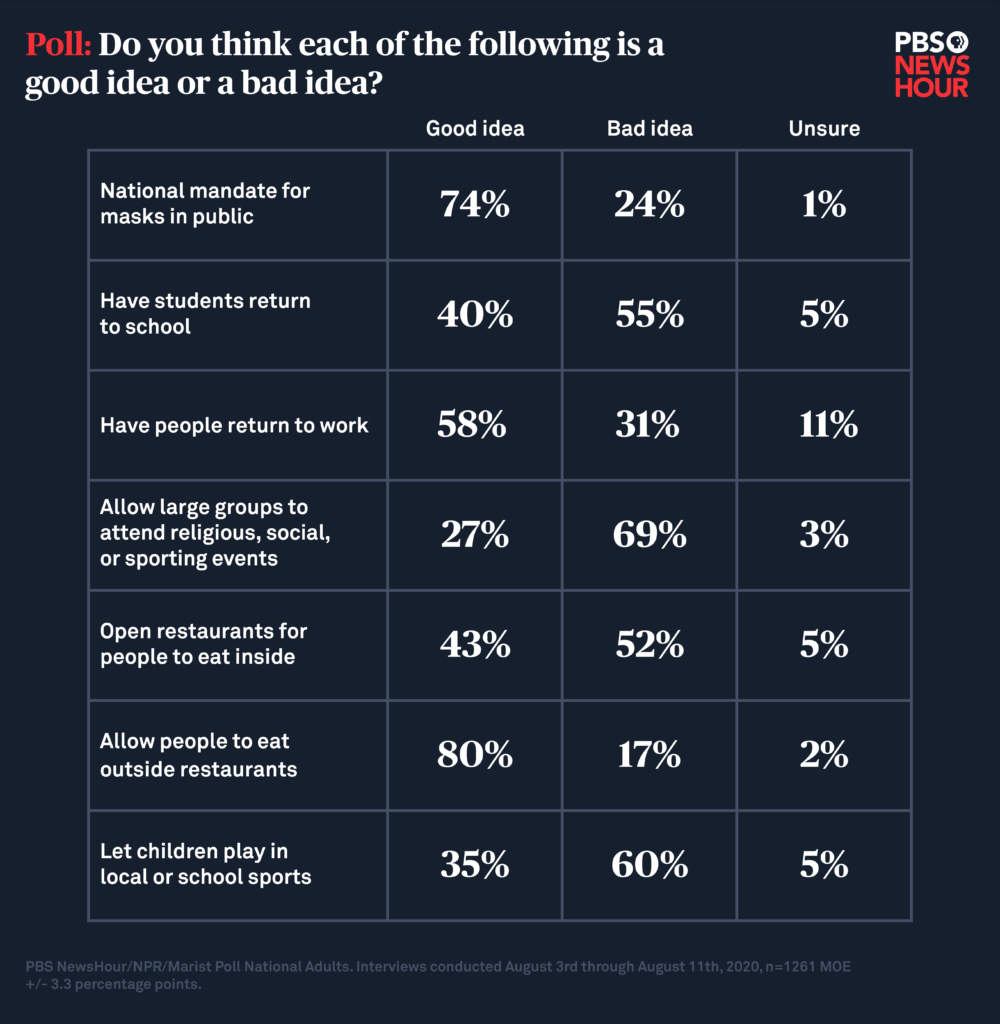 One important factor that has emerged amid economic recovery efforts is how to safely reopen schools and sustain child care for working parents. In the debate over whether to resume in-person classes as opposed to virtual learning, 40 percent of Americans agree with Trump that it is safe for children to return to school. That is up from just 14 percent who said as much in April, when most of the country was shut down.

In some parts of the country where communities have taken aggressive measures to box in the virus and with low positivity rates, such as New York or Massachusetts, Wen said it may actually be safe for children to attend school in person, with safeguards in place like social distancing, wearing masks and washing hands. But in communities where transmission rates remain high, it’s simply not safe to do that yet.

Roughly half of Americans — 53 percent — believe the demonstrations prompted by the police killing of George Floyd are mostly legitimate protests, including 85 percent of Democrats and 55 percent of independents. Another 38 percent said those actions were mostly people acting unlawfully, including 73 percent of Republicans.

That’s a significant shift since June, when images of Floyd’s death were still fresh in peoples’ minds and the protests momentarily pushed the pandemic into second place on the evening news. Then, 62 percent of U.S. adults believed the demonstrations were mostly legitimate.

READ MORE: Why chronic stress and COVID-19 are a ‘perfect storm’ for the health of black Americans

Declining faith in the motivations of the protesters could be the result of Trump threatening those who took to the streets, calling them looters and embolding efforts to stifle their demonstrations for months. Amid protests against police brutality in Portland, Oregon, federal officers were deployed, leading to clashes and criticism over their use of force. In this latest poll, Americans were split on whether they thought the use of federal law enforcement was a good idea or a bad idea, with clear partisan divides emerging between Democrats and Republicans.

For generations, race has formed “the underbelly of American politics,” particularly as a tool by which one party might “exploit white grievance and white resentment and white fears for its own benefit,” said Eddie Glaude, professor and chair of the department of African American Studies at Princeton University. While “it seems as if the Republican Party has been overrun by that [rhetoric],” Glaude said, there’s general skepticism about whether either party will adequately address issues of race in the U.S.

As they look toward the 2020 election, many Americans are asking how the country and its leadership can fundamentally address systemic racial inequality that touches every aspect of life — just as the pandemic has reshaped life, and not equally for everyone.

Left: Roughly half of Americans -- 53 percent -- said they would vote for former Vice President Joe Biden over President Donald Trump if the 2020 election were held today in the last PBS NewsHour/NPR/Marist poll. Photos by Joshua Roberts and Carlos Barria/Reuters