About 90 percent of the United States’ population is currently living under “stay at home” or “shelter in place” orders, significantly restricting Americans’ daily lives in order to preserve public health against the novel coronavirus.

But even as state leaders maintain broad authority to issue such directives, their hesitation to strictly enforce them highlights the challenges of preserving civil liberties during an unprecedented health crisis.

“No one wants a story on the evening news about police officers arresting some person that had a legitimate purpose walking their kid or their dog,” said Adam Chilton, a University of Chicago Law School professor.

Since California on March 19 became the first to issue a statewide order for all residents to stay in their homes, about 37 more states, as well as Washington, D.C., and Puerto Rico, have implemented similar measures to limit possible exposure to the virus. Beyond that, at least 48 counties and 14 cities in states like Utah and Wyoming that don’t yet have statewide orders have put stay-at-home policies in place.

The measures implemented across states and cities may vary in name, but all share a common mandate: Residents must limit their daily movements to essential activities. Businesses deemed nonessential, such as gyms, movie theaters, amusement parks and sit-down restaurants, have been instructed to close their doors to patrons. Thousands of schools and colleges have either moved to online learning or cancelled classes altogether.

In places like Ohio, Virginia, Michigan, the District of Columbia and beyond, popular outside gathering spots like playgrounds, athletic fields and beaches have been closed and blocked off.

“No one wants a story on the evening news about police officers arresting some person that had a legitimate purpose walking their kid or their dog.”

People are still allowed to work for or receive services from designated “critical” industries, including grocery stores, hospitals, utilities companies and public transportation systems, and
can take walks outside or participate in outdoor recreation like hiking or biking as long as they follow social distancing guidelines.

Violations of these orders in some cases could result in fines of several thousand dollars or arrest and misdemeanor charges. But defining the parameters of these measures in a way that is both realistic for the public’s needs while also preventing unnecessary contact can be a challenge, Chilton said.

“It’s very difficult to think of every possible legitimate exception in such a tight time frame. You wouldn’t want to put out a list that you could only leave your house for five reasons, but then forget about people that have another legitimate purpose,” Chilton said.

In the weeks leading up to the wave of stay-at-home orders, mayors and governors urged residents to follow health safety recommendations. Still, many continued to crowd parks, bars and recreation centers.

“I know this is hard for everyone. That said, we saw a lot of crowds out and about,” Illinois Gov. J.B. Pritzker said during a news conference several days before issuing a stay-at-home order on March 20 that is now in effect through April 30. “We can have a massive positive effect on bending the transmission curve, and thereby saving lives, if people will take this seriously.”

Weeks later, officials are still grappling with how to stop unnecessary activity. “In recent days we have seen data indicating that movement may be increasing and we must get these numbers trending back down. I have updated my previous executive order to clearly require that Tennesseans stay at home unless they are carrying out essential activities,” said Tennessee Gov. Bill Lee on Thursday.

There are few precedents for this sort of widespread crackdown on public life in the U.S., but state, local and tribal authorities have far-reaching ability to enact public health measures under the “police power” provided by the 10th Amendment to the Constitution. The U.S. Supreme Court has upheld this broad power to protect people during a public health crisis, said Stephen Dycus, who teaches national security and environmental law at Vermont Law School.

“Going all the way back to the early 19th century and more recently, the Supreme Court has said in several ways that states can establish quarantines and they can force people to be vaccinated,” Dycus said. 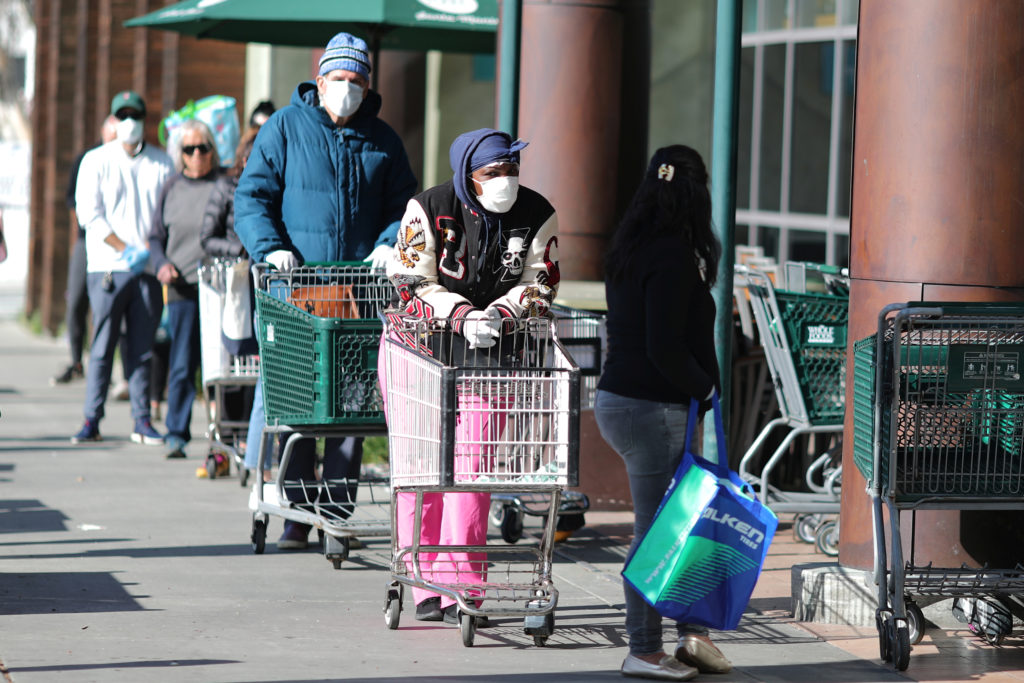 People stand apart from each other as they wait in line outside Whole Foods after California issued a stay-at-home order due to coronavirus disease (COVID-19) on March 25, 2020. Photo by Lucy Nicholson/Reuters.

The 1824 case Gibbons v. Ogden protected the states’ right to impose isolation or quarantine. The 1905 case Jacobson v. Massachusetts upheld mandatory vaccinations after a smallpox outbreak. Courts have continued to reinforce such authority over the years.

But there are limits on this authority. Officials cannot push discriminatory or arbitrary policies, said Lindsey Wiley, director of the Health Law and Policy Program at American University. For example, recent attempts by some states, like Rhode Island, to single out and question people with New York license plates become more complicated legally because the state, if faced with a legal challenge, would have to demonstrate the need for such targeted measures to protect the public, legal experts said. Ultimately, though, they believe that most courts would uphold the restrictions given the unusual and dangerous situation posed by the virus.

And despite calls for President Donald Trump to implement a national quarantine, the federal government actually has limited legal means to do so. Instead, state and local departments act as the first line of defense during a public health crisis, Wiley said.

Polling indicates that the public largely supports restrictive measures to fight COVID-19, the disease caused by the novel coronavirus. In a survey of 3,000 U.S. residents, Chilton of the University of Chicago and other legal experts asked about potential policy responses to the outbreak. A majority of the respondents across the political spectrum supported all eight of the proposals that included banning non-citizens from entering the country and banning movement outside of homes. The proposal with the least favorability — seizing businesses — still garnered support from 58 percent of respondents.

“The last thing you want to do is round people up in crowded jails.”

But even with the ostensible support of the public, the appetite of law enforcement for making sure people abide by the rules has been mixed. In California, a number of sheriffs told a local news outlet they would opt for educating the public rather than legally enforcing the state order.

“The hope is that people will self-regulate their behavior and home isolate, protect themselves and go about only the ‘essential’ activities using social distancing and common sense,” said a spokesperson for the California State Highway Patrol after the state’s order was issued on March 19.

“I want to be perfectly clear that neither the Sheriff’s Office, nor any of the police departments have any desire to make any arrests or take anybody to jail for violations of this order,” said Sacramento County Sheriff Scott Jones.

Florida had been one of the few remaining holdout states before Gov. Ron DeSantis implemented a statewide order on Wednesday. But DeSantis still granted an exemption for religious services, despite an incident several days before when an evangelical pastor in Tampa was arrested for violating a county stay-home mandate by continuing to hold in-person services.

Other jurisdictions are cracking down harder on people in violation of the orders. In Lakewood, New Jersey, police broke up an Orthodox Jewish funeral and charged 15 people with violating the state’s stay-at-home order. The Maryland State Police told the PBS NewsHour that since Gov. Larry Hogan issued the statewide stay-at-home order on March 24, local and state law enforcement officers have responded to about 600 calls reporting businesses or individuals for violations. Seven people have been arrested or charged for violations since then.

In Chicago, the city police department said between March 25 and April 1 officers were called to 910 dispersals for potential violations. In that time, the Chicago Police Department said it has issued 10 citations and made three arrests related to large gatherings.

As public agencies try to balance their roles during this tense time, confirmed cases of the virus in the U.S. have increased to nearly a quarter million — the most of any other nation. Wiley of American University said she worries that public impatience will add more pressure on officials to take more heavy-handed enforcement actions to ensure compliance with stay-at-home restrictions.

“It takes about three weeks for what’s happening in the community to translate to what’s happening in hospitals … We’re not good as humans at understanding that it takes time to see results,” Wiley said. “The last thing you want to do is round people up in crowded jails.”

Left: National Guard Officers work at a checkpoint, amid restrictions on travel due to the coronavirus disease (COVID-19) outbreak, at Westerly Station, in Westerly, Rhode Island, U.S., March 28, 2020. REUTERS/Oliver Doyle