New abortion laws are too extreme for most Americans, poll shows

Recent efforts by Republican-controlled state legislatures to enact some of the most restrictive abortion laws in decades go against the views of most Americans, according to the latest poll from the PBS NewsHour, NPR and Marist, which could spark a backlash against the party in the 2020 elections.

Only 33 percent of Americans support so-called “heartbeat laws” that have gained traction in several states this year, the poll found. The laws prohibit abortions after cardiac activity is detectable at around six to eight weeks, which can be before a woman realizes she is pregnant.

Similarly, less than a quarter of U.S. adults support making it a crime for a doctor to perform an abortion — a provision included in a recently-passed Alabama law that bans nearly all abortions. 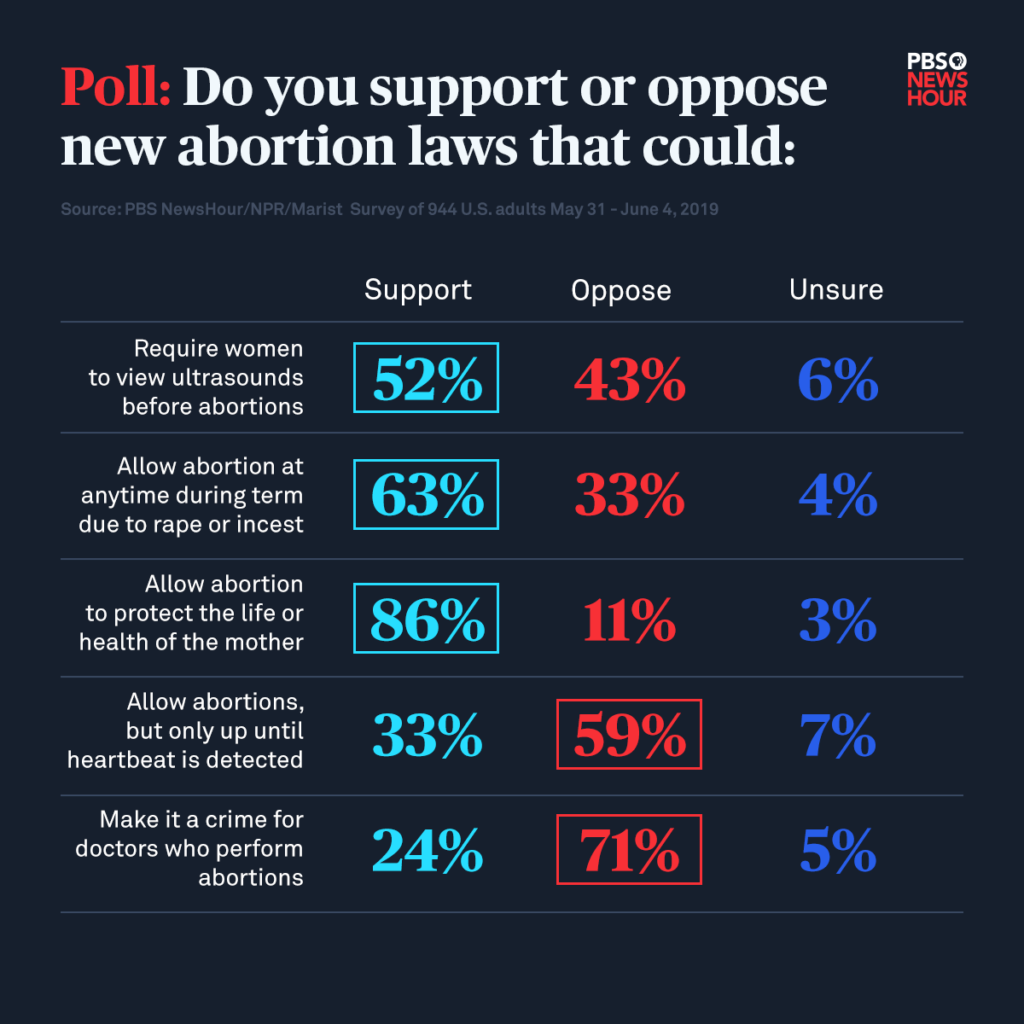 Sixty-three percent of Americans favor laws that allow abortions in cases of rape and incest. And 86 percent support laws enabling abortion if it protects the life or health of a woman. But a majority of Americans do not support allowing abortion in any circumstance, a sign that far-left positions on the issue — such as those being pushed by some Democratic lawmakers in places like Vermont — are just as politically risky as the conservative laws being passed in Alabama, Mississippi and elsewhere.

“The debate is about the extreme, and that’s not where the public is,” said Barbara Carvalho, the director of the Marist Poll.

There is some common ground among the majority of Americans who do not fall on the extreme right and left ends of the spectrum on the abortion issue. For example, roughly two-thirds of Americans are in favor of requiring women to wait 24 hours between meeting with a health professional to undergo an abortion procedure, and support requiring doctors who perform abortions to have hospital admitting privileges.

Those sorts of restrictions were routinely introduced by GOP-held legislatures in past years. But in recent months, conservative lawmakers from both parties have been more willing to push the boundaries, even at the risk of alienating some of their constituents who hold more nuanced views on abortion.

“I don’t believe in killing things, but I think there are exceptions to almost everything,” said 77-year-old Elizabeth Clare Hunt, a Republican voter who identifies as pro-choice and lives in Nevada, where lawmakers recently voted to expand abortion rights. She said politicians are relying too heavily on politically-charged terms like “heartbeat” and “viability” that mean little to the average person.

Instead, many voters say their views are informed by personal experiences. Georgia resident Marques Wright, 37, said his mother decided not to have an abortion when she was pregnant with his older sibling and that has caused him to identify as pro-life.

“At the same time, I can’t tell a woman what I can and can’t do with her body,” he said.

Americans’ views on specific abortion policies tend to remain stable over time, historical polling shows, but whether Americans identify as pro-choice or pro-life routinely shifts based on the national discourse at the time.

When lawmakers “change the debate toward the most extreme position on the issue, they actually do the opposite of what they want to accomplish. They move public opinion in the opposite direction,” Carvalho said.

In February when much of the debate was around a controversial New York law that expanded access to abortion, an equal number of Americans, 47 percent, said they identified as either “pro-choice” or “pro-life.” Only one month prior, in January, the number of people identifying as “pro-choice” was 55 percent, compared to 38 percent who identified as “pro-life.”

Whether Americans identify as pro-choice or pro-life routinely shifts based on the national discourse at the time.

The divide underscores how easily identifications can swing when public opinion goes against laws on the left or the right.

“People who are on the extremes are certainly giving their political opponents opportunity to take shots,” said Republican strategist Liz Mair. “This is not something that is purely a problem for Republicans. This can be very problematic for Democrats, too.”

While some states like Nevada, Illinois and New York have moved to protect abortion, a potential turn off for moderate voters, bills pushed by conservative lawmakers have dominated the national debate. And if Republicans do not change the narrative around abortion before the 2020 election, it could push more independents toward the Democratic Party.

The role of the Supreme Court

Anti-abortion advocates see the court’s makeup as a chance to weaken or overturn Roe v. Wade, the landmark 1973 court ruling that legalized abortion.

“They want to make hay while the sun shines and pass as much of their pet legislation as they can while they have the opportunity,” said Dennis Goldford, a political science professor at Drake University in Des Moines.

Some state lawmakers and activists have said they’ve specifically written legislation to spark a legal challenge that will end up before the Supreme Court. 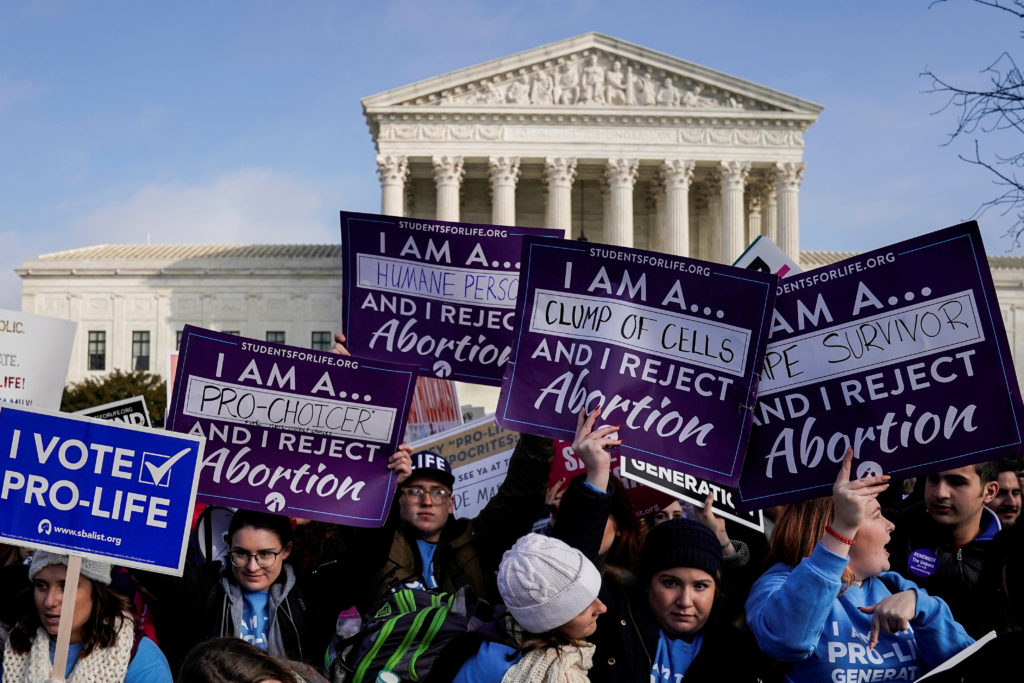 Anti-abortion marchers rally at the Supreme Court during the 46th annual March for Life in Washington, on January 18, 2019. Some state lawmakers have said the bills they are pushing aim to ultimately overturn Roe v. Wade. Photo by Joshua Roberts/Reuters

The current focus on overturning Roe v. Wade has parallels to the early 1990s, when the court had eight justices who were appointed by Republican presidents. In 1992, the court reaffirmed Roe v. Wade in the case Planned Parenthood v. Casey, which questioned a Pennsylvania law that implemented a number of restrictions on abortions. The court upheld most of the provisions but also established that state rules cannot impose an “undue burden” on a woman seeking an abortion “before the fetus attains viability.”

That should serve as a “cautionary tale” to anti-abortion advocates today, said Mary Ziegler, a Florida State University law professor and historian who focuses on abortion policies.

So far, the current Supreme Court has been hesitant to rule on abortion. Just last month, the court ruled on an Indiana law that regulated how to dispose of fetal remains, but it chose not to weigh into the issue of access to abortion itself. 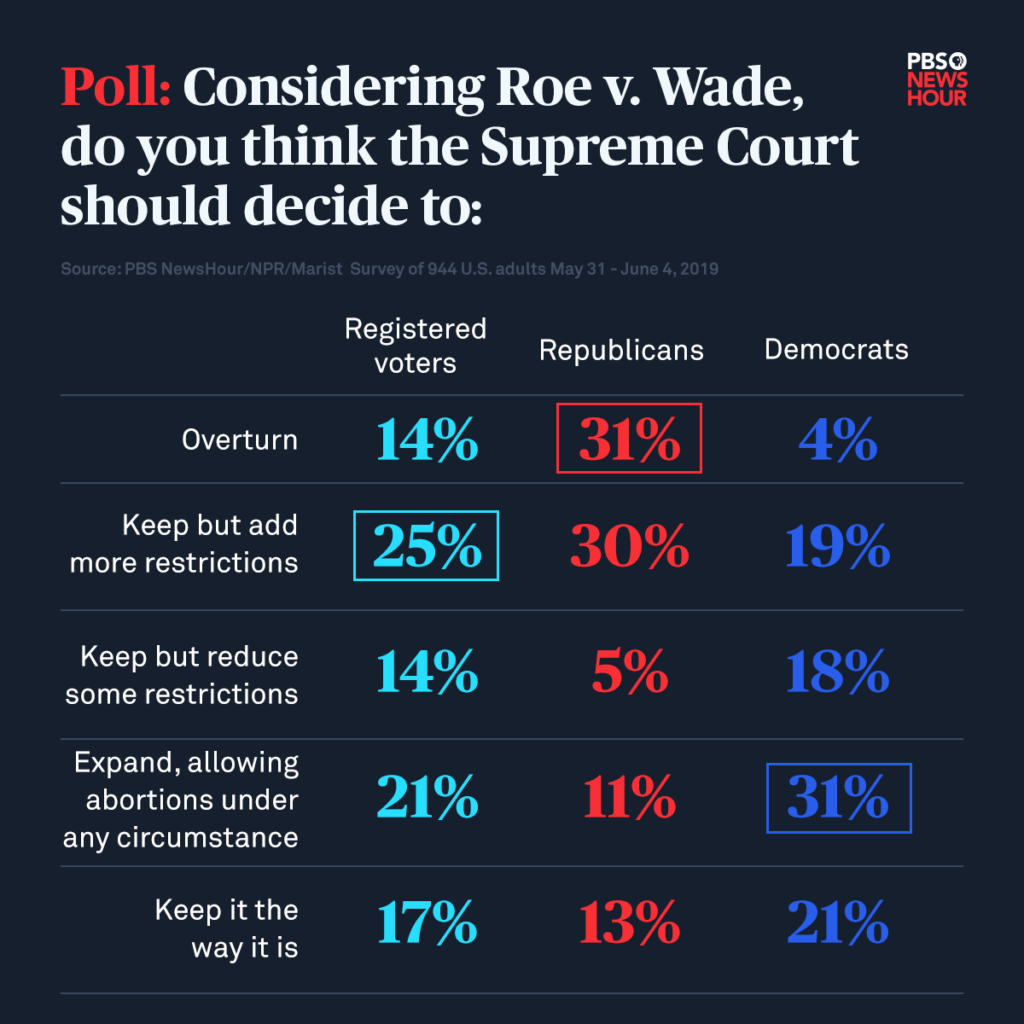 Most Americans do not support the view of some Republicans that Roe v. Wade should be overturned.

Fifty-one percent of U.S. adults want the court to uphold the decision and either leave it unchanged or alter it to expand abortion rights, according to the PBS NewsHour-NPR-Marist poll. In contrast, 26 percent of Americans want to uphold Roe v. Wade but add more restrictions on abortions, and 13 percent want the court decision overturned entirely.

Turning out the base

Regardless of whether a person identifies as being for or against abortion, a majority of Americans said they are dissatisfied with the nation’s abortion policies. Thirty-seven percent of those people were very dissatisfied, the highest number recorded since 2001.

Both parties are hoping they can use that dissatisfaction to fire up their bases.

The question of overturning Roe v. Wade “has often felt like an academic issue. It never felt like it could actually happen. With the current Supreme Court, that’s all changed,” said David Pepper, the chair of the Ohio Democratic Party.

Anti-abortion advocates are starting to claim victories, including in Ohio, which passed a bill that bans abortions after cardiac activity is detected. But state GOP leaders are warning their bases not to become complacent.

“Our pro-life organizations in Ohio are remaining very active and vigilant,” said Jane Timken, the chair of the Ohio GOP. She pointed out that the court battles challenging abortion bans like Ohio’s are likely to go on for years, and voters still need to show up to the polls if they want a president who will appoint conservative judges to uphold the restrictions.

In Iowa, Joseph Brown, the pastor at Marion Avenue Baptist Church, said abortion is top of mind for many religious voters in his congregation. A number of congregants have told him they believe “the battle lines are being drawn” on the issue, Brown said. And even though some don’t like Trump, Brown said, they plan to vote for him anyway because he will appoint conservative judges.

On the other side of the divide, those who support more abortion access are also thinking about abortion and judicial appointments when voting for president.

Fifty-four percent of registered voters said they would definitely not vote for a presidential candidate who would appoint Supreme Court judges to limit or overturn Roe v. Wade, the PBS NewsHour-NPR-Marist poll found. That’s up from the 45 percent who said the same in a Marist poll conducted in October 2008 before Barack Obama was elected president.

Where abortion ranks as a voting issue

Abortion is not the first priority for most Americans when deciding how to cast their vote, but it does rank among the top issues. Eighty-one percent of Americans said a candidate’s position on abortion would be a major or minor factor in deciding their vote for president in 2020, according to the PBS NewsHour-NPR-Marist poll. 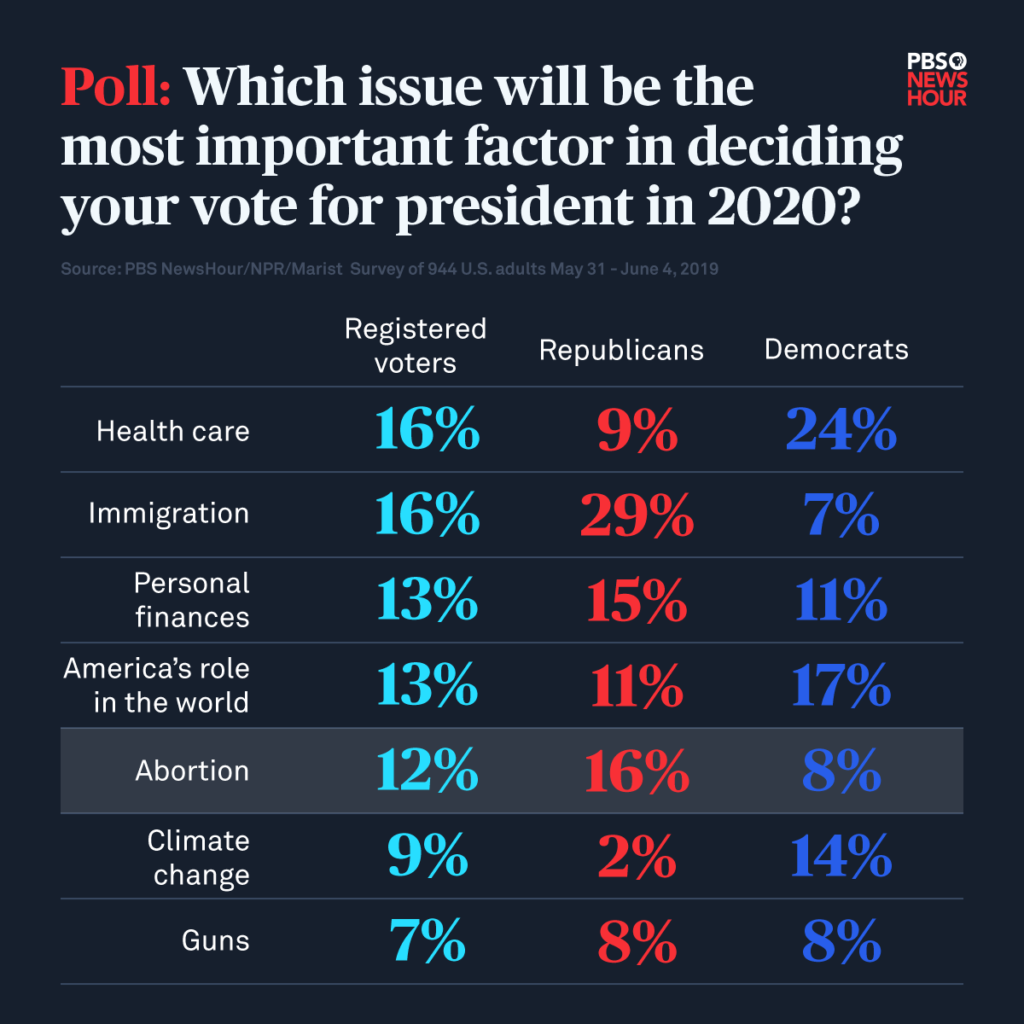 But abortion is just one of many factors voters are considering. Health care and immigration top the list of key issues with 16 percent of registered voters saying each was the most important factor in deciding their vote for president in 2020. Personal financial well-being and America’s role in the world was the most important factor for 13 percent of voters, and abortion ranked as the top priority for 12 percent of voters.

“Health care is a kitchen table issue,” said Lynda Tran, a Democratic strategist with the consulting firm 270 Strategies. “There is a lot of opposition to the idea that anyone, much less a lawmaker, should be getting in between a woman and her doctor.”

Strong messaging on abortion could help Democrats repeat their results from the 2018 midterms, when health care overall was a major issue and many traditionally Republican suburban women voted Democrat.

But Mair, the Republican strategist, said GOP candidates could also retain the support of suburban women voters — who are often married and have children — by offering a more nuanced approach to abortion that takes into account their personal experiences.

“There aren’t very many people who have had that literal physical experience who do not think that at five months at gestation they are carrying a living human being, a baby inside them,” Mair said.

The terminology both men and women use to describe pregnancy exemplifies the complexities that underlie Americans’ view of abortion.

Half of all U.S. adults, including half of all women, said they feel more comfortable describing the first three months of a pregnancy as a “fetus,” whereas close to three-quarters of Americans, including slightly more women than men, are most comfortable describing the last three months of pregnancy as an “unborn child,” the PBS-NPR-Marist poll found.

*Editor’s note: This survey asked people to identify as either pro-life or pro-choice. This question wording, using the labels of pro-life and pro-choice, was included in the survey because it has been used to track the public debate on abortion over decades. It is sensitive to current events and public discussion even though it does not capture the nuanced positions many people have on the issue.

Left: Pro-choice and Pro-life protesters stand outside of Planned Parenthood as a deadline looms to renew the license of Missouri's sole remaining Planned Parenthood clinic in St. Louis, Missouri, on May 31, 2019. Republican lawmakers have pushed bills to restrict abortion, but many go beyond what most Americans support. Photo by Lawrence Bryant/Reuters