Politics still drives how Americans feel about COVID response, one year in

The coronavirus pandemic has claimed the lives of more than 526,000 people in the U.S. and cost the economy tens of millions of jobs. Americans have looked to leaders to act, but one year in, voters and lawmakers continue to be split on how best to navigate the country out of these crises.

How people think the country should approach the pandemic, and what it should prioritize, continues to fall along deep political lines, according to the latest PBS NewsHour/NPR/Marist poll.

The $1.9 trillion American Rescue Plan Act passed this week by Congress was designed to help stabilize the country’s sagging economy while further supporting state and local governments amid sinking tax revenues and aiding in vaccine distribution.

President Joe Biden is expected to sign the legislation into law and millions of Americans stand to benefit from some of its programs. Many, about 37 percent, are happy with what the legislation will provide. But a majority of the country either thinks the act goes too far or not enough. 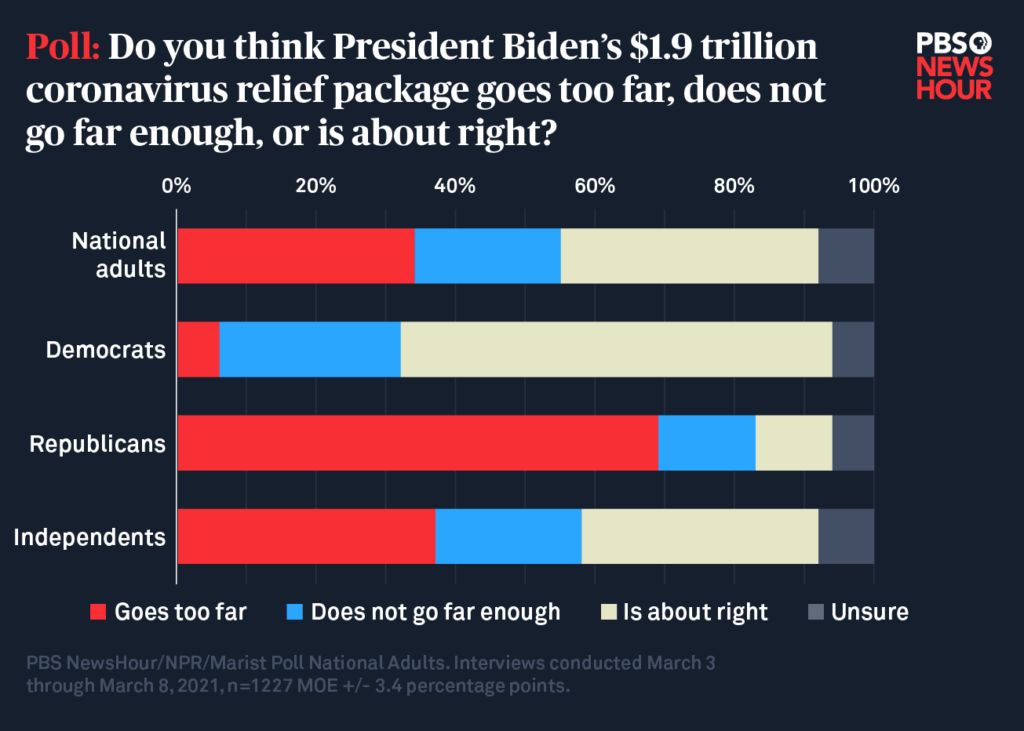 The U.S. stands at a pivotal moment in the pandemic where actions taken now could either help contain the virus and restore normal life or lead to a disastrous fourth surge of COVID-19 infections, hospitalizations and death.

New, more easily transmissible variants of COVID-19 have been identified in almost every state in the U.S., the Centers for Disease Control and Prevention reported Monday, and 51 percent of Americans think their state must prioritize controlling the spread of the virus, even if it hurts the economy. But 43 percent of Americans think restarting the economy should take precedence over trying to contain the virus’ spread, and multiple governors have either already lifted mask mandates and restrictions on businesses in their states, or have announced plans to do so in the coming days.

Thirty-six percent of adults know someone who has died of COVID, while 30 percent say they don’t want to be vaccinated.

U.S. split on how robust COVID-19 relief package should be

Months in the making, the relief package Biden is expected to sign this week provides for a third round of economic impact payments — $1,400 one-time payments to individuals earning $75,000 or less annually. It also earmarks $350 billion to help state and local governments and $14 billion for vaccine distribution. And it offers a per-child tax credit of up to $3,600, depending on age, and boosts weekly jobless benefits by $300 through Sept. 6.

Those divisions were mirrored in Congress, where the aid package was passed by Democrats without winning over a single Republican lawmaker.

After years of political gridlock, most Americans are hungry for solutions and ready for lawmakers to broker change. In this latest poll, 68 percent of them said they wanted Biden to compromise with Congress. That includes 82 percent of Republicans, 72 percent of independents and 59 percent of Democrats.

Only 21 percent said the president should not yield on issues, even if that means creating a legislative bottleneck. Roughly one in 10 Americans weren’t sure of the best course of action.

That desire for politicians to do more to work together was reflected in a previous PBS NewsHour/NPR/Marist poll from Dec. 9, in which two-thirds of Americans said they preferred compromise among government officials rather than gridlock.

What matters most to Americans during the pandemic

The challenges of combating the pandemic and its economic fallout have spurred the desire for action and for compromise. But Americans are split on which issues to tackle first. Forty-three percent said vaccine distribution is their top priority while 21 percent said reopening schools was more important.

More than 2 million people in the U.S. are getting vaccinated each day, said Dr. Rochelle Walensky, who directs the CDC, during the White House COVID-19 Task Force briefing Monday. So far, more than 62 million people have received at least one dose of a coronavirus vaccine.

But it will still be many months before most of the population is vaccinated, and there’s huge pressure to reopen schools, many of which have conducted remote learning for the last year. Throughout the pandemic, child advocates have raised concerns about how remote learning worsened existing disparities in education and health outcomes for millions of children, while many teachers feared for their own safety if they were forced to return to their classrooms without a vaccination.

Securing public health and the economy doesn’t have to be a choice, said Katherine Baicker, a health economist and dean of the Harris School of Public Policy at the University of Chicago. But politics has corrupted the way many people perceive their options, she said.

In this latest poll, 78 percent of Democrats said they think their states should stop the spread of coronavirus, even if it hurts the economy. But 74 percent of Republicans said states need to prioritize the economy over the pandemic.

How Americans view the vaccine rollout

The coronavirus has amplified an issue that communities of color have raised for generations: Systemic racism creates barriers to accessing or trusting health care, which has also led to worse outcomes and persistent disparities for many people of color in the U.S. Bottlenecks in the coronavirus vaccine rollout have been no exception to that trend.

States have painted an incomplete picture of who gets vaccinated for COVID-19, with only 53 percent reporting race and ethnicity data. That makes it difficult to monitor how equitable the nation’s vaccine response is and where communities need more access to life-saving vaccines. So far, Black, Latino and Asian people have been under-represented among those vaccinated compared to white people, according to the CDC COVID Data Tracker.

“These disparities do not correct themselves. There needs to be intentional effort,” said Dr. Leana Wen, a professor at George Washington University and an emergency physician.

While two-thirds of U.S. adults said they are either willing to get vaccinated or already have been, Wen said that’s not enough to reach herd immunity. It will be months before children 12 years or older will be eligible to be vaccinated against COVID-19, and until then, Wen said far more adults need to roll up their sleeves if the nation hopes to contain the virus. 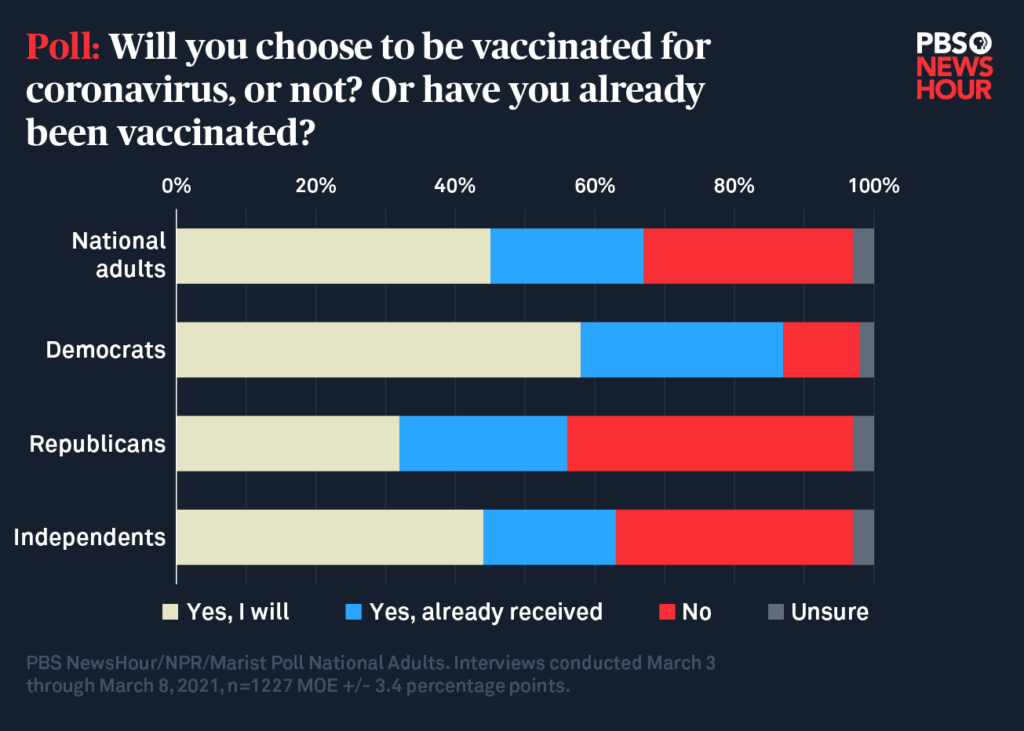 Those who want to get vaccinated but have not yet received a shot include 52 percent of Latino Americans, 48 percent of Black Americans and 43 percent of white Americans.

If people don’t get vaccinated, those pockets could give a place for the virus to hide and cause future outbreaks that spill over into bigger communities, said Lawrence Gostin, who serves as a director for both the O’Neill Institute for National and Global Health Law and World Health Organization Collaborating Center on National & Global Health Law.

The virus’ stealth nature and potential for outbreaks have been its greatest assets, Gostin said. “As soon as we let our guard down, this virus takes advantage of it.”

Left: In the latest PBS NewsHour/NPR/Marist poll, 51 percent of Americans say they think states should focus on controlling the spread of the coronavirus, even if it hurts the economy. Photo by Spencer Platt/Getty Images