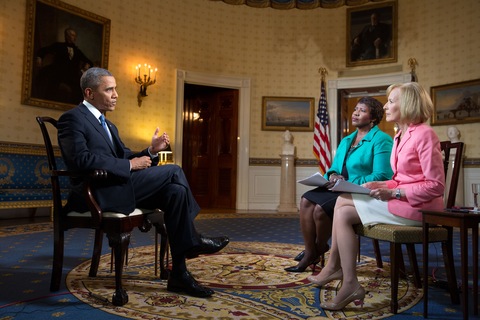 President Barack Obama sat down with Gwen Ifill and Judy Woodruff Wednesday at the White House. On the subject of Syria, the president stressed he has “no interest” in “any kind of open-ended conflict” there, but he said that countries that use chemical weapons must be held accountable. Official White House Photo by Pete Souza

President Barack Obama may not have made a decision on how to respond to Syria’s use of chemical weapons, but he clearly is outlining a case for action.

The president told the PBS NewsHour in an exclusive 27-minute interview Wednesday that there is a need for “international consequences” if everything officials suspect about what has happened in Syria under the Assad regime is true.

Speaking with Gwen Ifill and Judy Woodruff in the Blue Room, Mr. Obama got at the heart of why the United States is accelerating its push for action:

…[W]hen you start talking about chemical weapons in a country that has the largest stockpile of chemical weapons in the world, where over time, their control over chemical weapons may erode, where they’re allied to known terrorist organizations that, in the past, have targeted the United States, then there is a prospect, a possibility, in which chemical weapons that can have devastating effects could be directed at us. And we want to make sure that that does not happen.

As the interview concluded, House Speaker John Boehner, R-Ohio, sent the president a letter urging him to clearly define a mission in Syria. As Politico notes, that request could be the opening salvo in “what’s sure to be a turf battle between Congress and the White House over military intervention in the country.”

Gwen and Judy spoke with Mr. Obama just after he concluded a speech at the Lincoln Memorial to mark the 50th anniversary of the March on Washington. In addition to talking about tensions with Syria and his administration’s broader approach to the region, the president reflected on economic equality and how race may have affected his ability to implement his agenda.

Gwen presented the president with a recent assessment civil rights historian Taylor Branch made in his own interview with the NewsHour. Branch said Mr. Obama is a victim of partisan racial gridlock.

But the president disagreed, saying the gridlock is connected to longstanding political views that helping those Americans who lack opportunities is bad for the economy. He added that he doesn’t take it personally.

“There’s a line that’s drawn between the deserving poor and the undeserving poor. And you know, that, I think, has been a fairly explicit politics in this country for some time.”

Mr. Obama used the question to talk about his drive for infrastructure improvements that can help boost low-income and middle-class Americans. From his response:

I do think what, what you’ve seen, and I, I touched on this theme during the speech, I think it has less to do with … my race, but there is an argument that was made in 1964, 1965 on through the ’80s and ’90s in which those who resisted any change in the status quo, particularly when it came to economic opportunity, made two big arguments.

Argument number one was, any efforts by government to help folks who were locked out of opportunity, whether it was minorities or the poor generally, unions, any effort by government to help those folks is bad for the economy. And that became a major argument. And if, in fact, people start thinking the government’s the problem instead of the solution, then what that leaves you is whatever the marketplace does on its own. And what we’ve seen is a marketplace that increasingly produces very unequal results. And it … disempowers our capacity for common action to do something about poverty, to do something to help middle-class families.

And I think the second element to that argument that has been made, sometimes subtly, sometimes not so subtly, is that government has hurt middle-class families or hurt white working-class families, because, you know, pointy-headed bureaucrats in Washington are just trying to help out minorities or trying to give them something free.

And you know, there’s a line that’s drawn between the deserving poor and the undeserving poor. And you know, that, I think, has been a fairly explicit politics in this country for some time. And it’s directed at Bill Clinton or Nancy Pelosi just as much as it’s directed at me. I — I think it — it doesn’t have to do with my race in particular; it has to do with an effort to make sure people who might otherwise challenge the existing ways that things work are divided.

And so part of what Dr. King talked about, part of what I think we have to get back to is the recognition that, you know the — the working man in Arkansas who happens to be white and the white woman in Philadelphia who wants to work, but is having a tough time finding a job, that they’ve got things in common that, in fact, they can work together. And if they both got kids, we want to make sure both of the — those kids are able to get the training they need and go to college and succeed in this — in this economy.

Watch the interview in full here or below:

Or read the transcript.

Earlier at the Lincoln Memorial, Mr. Obama delivered a fiery speech to outline how he has seen King’s dream both realized and become “even more elusive.” Economic opportunity is the key to a better future for everyone.

“[A]s we mark this anniversary, we must remind ourselves that the measure of progress for those who marched fifty years ago was not merely how many blacks could join the ranks of millionaires,” he said. “It was whether this country would admit all people who were willing to work hard, regardless of race, into the ranks of a middle-class life. The test was not and never has been whether the doors of opportunity are cracked a bit wider for a few. It was whether our economic system provides a fair shot for the many — the black custodian and the white steelworker, the immigrant dishwasher and the Native American veteran.”

“To win that battle, to answer that call — this remains our great unfinished business.”

As we noted Wednesday, the president has long been using King’s “fierce urgency of now” phrase to make political points. He did that Wednesday before the massive crowd in drizzly Washington.

“And I am convinced that same imagination, the same hunger of purpose, stirs in this generation. We might not face the same dangers of 1963, but the fierce urgency of now remains,” he said. “We may never duplicate the swelling crowds and dazzling procession of that day so long ago — but the same flame can light the heart of all who are willing to take a first step towards justice.”

Watch the president’s speech here or below:

See other speeches from the Let Freedom Ring ceremony here, and check out our full menu of March on Washington coverage.

Editor’s note: The Morning Line will be back Tuesday, Sept. 3. Until Congress returns, we’re only publishing once a week. Visit our home page for news and show segments, and follow @NewsHour for the latest.

Happy Birthday to my fabulous husband @SenJohnMcCain. Enjoy your day!!

Obama says “politics is not beanbag.” I’ve heard that 1,000 times and I still don’t know what that means.

This was the official program for the March on Washington. pic.twitter.com/TDh9i00D1V

In FBI file on my Dad, a WaPo reporter, after he wrote critically of its MLK wiretaps: “The director noted: ‘Harwood is certainly a rat.’ ”

Pope Francis poses for a ‘selfie’ at the Vatican: http://t.co/dti4bMzhOa