Gordon Sondland, the U.S. ambassador to the European Union, testified on Wednesday that there was a “quid pro quo” regarding efforts to get Ukraine to investigate the 2016 elections and the Ukrainian energy company Burisma.

“I know that members of this Committee have frequently framed these complicated issues in the form of a simple question: Was there a “quid pro quo?” As I testified previously, with regard to the requested White House call and White House meeting, the answer is yes,” Sondland said during his opening statements at public hearing before the House Intelligence Committee.

“Mr. Giuliani conveyed to Secretary Perry, Ambassador Volker, and others that President Trump wanted a public statement from President Zelensky committing to investigations of Burisma and the 2016 election. Mr. Giuliani expressed those requests directly to the Ukrainians,” Sondland said in his testimony. “Mr. Giuliani also expressed those requests directly to us. We all understood that these prerequisites for the White House call and White House meeting reflected President Trump’s desires and requirements.”

Sondland testified as part of the ongoing impeachment inquiry into Trump.

Other witnesses have testified that Sondland played a key role in Trump’s efforts to get Ukraine to investigate the Bidens.

In a July 25 call that has become the focus of the impeachment inquiry, Trump asked Zelensky to investigate former vice president and 2020 presidential candidate Joe Biden and his son, Hunter. Hunter Biden sat on the board of the Ukrainian company, Burisma. 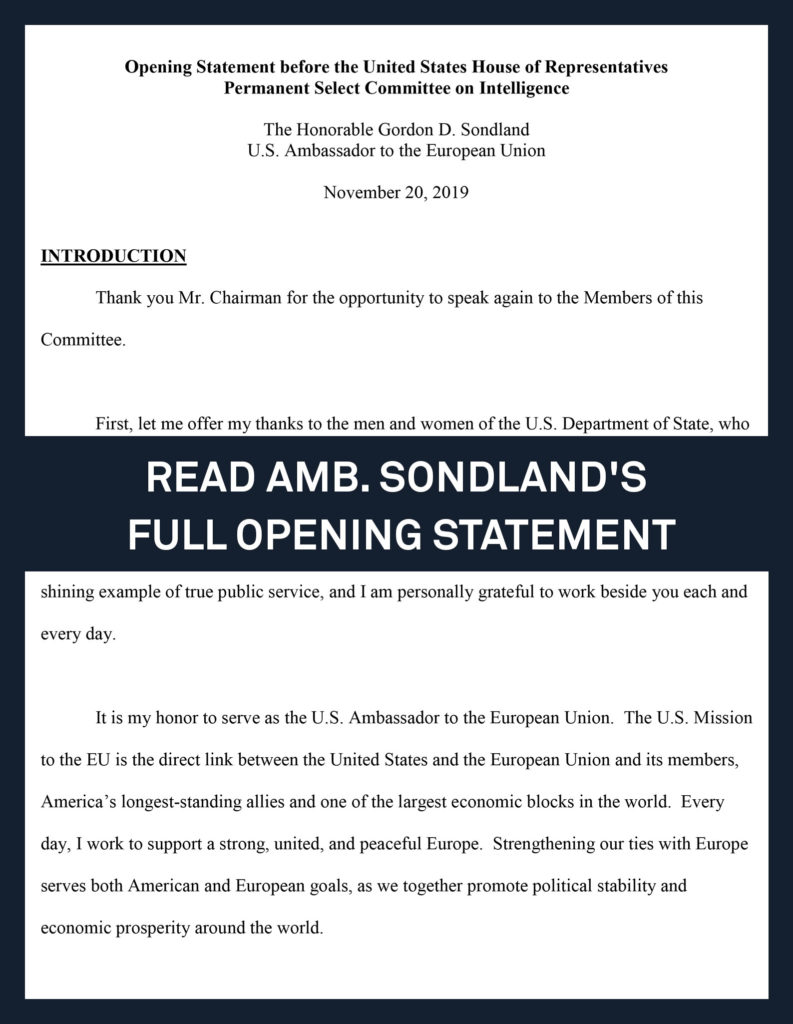 Left: U.S. Ambassador to the European Union Gordon Sondland takes his seat to testify before a House Intelligence Committee hearing as part of the impeachment inquiry into U.S. President Donald Trump on Capitol Hill in Washington, U.S., November 20, 2019. Photo by Jonathan Ernst/Reuters