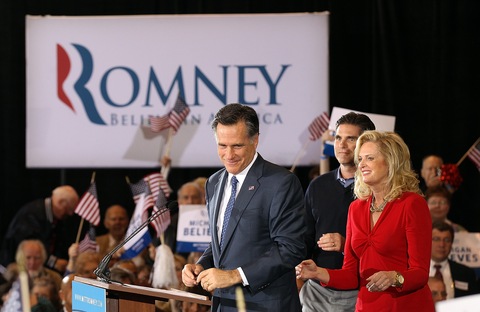 “We didn’t win by a lot but we won by enough,” Romney told supporters at his election night rally in Novi, Mich.

And that just about sums it up.

A loss would have hobbled the front-runner for the Republican presidential nomination, no matter how slim the margin or ugly the tactics, and no matter if it was due in part to meddling from Democrats. Romney’s narrow 41-percent-to-38-percent win over Rick Santorum in his native state of Michigan, on top of a decisive victory in the Arizona primary, restores him to a position of strength heading into Super Tuesday, when 419 delegates will be at stake through 10 contests across the nation.

By winning both contests, the former Massachusetts governor hit the reset button yet again on a turbulent nominating campaign that has been marked by sharp momentum swings, with the most recent one coming in Santorum’s favor after three early February victories.

In his victory remarks Tuesday, Romney already set his sights on his potential general election opponent, President Obama, turning one of his own campaign themes against him. “He thinks he deserves a second term,” Romney said, adding, “He says, ‘We can’t wait,’ to which I say, yes we can.”

Watch Romney’s speech below or here:

Santorum looked to put a positive spin on his narrow loss. “A month ago they didn’t know who we are, but they do now,” the former Pennsylvania senator told supporters in Grand Rapids, Mich. Also borrowing a line from Mr. Obama, Santorum said Michigan voters looked into the “hearts” of the candidates and his message in return is: “I love you back.”

So, what impact did Democratic votes have on the GOP contest? One in 10 voters in the Republican primary were Democrats, and 53 percent of them seem to have cast a ballot for Santorum.

Consider this stat found in network television exit polls: Santorum won with voters who “strongly support” the Tea Party movement and those who “strongly oppose” it.

Also worth noting, Santorum won with people who had attended some college or had never attended college, and Romney won those with college degrees and post-graduate study.

Track the live results in our Vote 2012 Map Center and watch all of the candidate speeches here.

It’s still not over.

The four-man race will remain just that, at least through next week as each candidate is focused on math.

“We have to gain delegates in a number of states, and I think we will,” Newt Gingrich told CNN. “We, frankly, made a decision that we’d put our resources into next Tuesday and beyond and recognize that we weren’t in a position to compete head-to-head in Michigan.”

The Detroit Free Press updates the impact of the Michigan primary on the delegate race:

Former Massachusetts Gov. Mitt Romney won the popular vote by a 41-38% margin as well as the tally in seven of 14 congressional districts, most of them in southern Michigan.

Former Pennsylvania Sen. Rick Santorum won six congressional districts, including the 1st district, which includes the Upper Peninsula an a portion of northern Lower Michigan by just two votes. All of Santorum’s wins came in the northern and western portions of the state.

The only district that hadn’t been determined as of 11:30 p.m. Tuesday was the 13th district, which encompasses Detroit and portions of western Wayne County.

Michigan allocated two delegates to the winner in each of the state’s 14 congressional districts, with two additional delegates being awarded based on the statewide proportional vote. How those two delegates will be split has yet to be determined, according to the Free Press.

The current tally looks like this, courtesy of the Washington Post’s delegate tracker:

While “a win is a win,” New York Times columnist David Brooks cautioned that Romney’s showing Tuesday “doesn’t mean all sunshine and roses for him.” Watch Brooks and syndicated columnist Mark Shields outline the path ahead for the restored front-runner:

Catch Wednesday night’s NewsHour for a full outline of the upcoming contests and the delegates at stake.

NEXT UP: SUPER TUESDAY

Ten states will vote next Tuesday, and the general election battleground of Ohio will be the top prize.

A University of Cincinnati poll released Tuesday put Santorum ahead of Romney by 11 points, 37 percent to 26 percent. A Quinnipiac University survey out Monday had Santorum up by seven points, 36 percent to 29 percent.

Fifty-three percent of respondents said they would definitely vote for their preferred candidate, with Santorum having the most solid support. Forty-seven percent said they might change their minds before next Tuesday.

Romney will seek to capitalize on his Tuesday wins by immediately shifting his focus to the Buckeye State, making his first campaign stop Wednesday morning in Toledo, then following up with an event in the Columbus area in the afternoon.

Santorum will campaign Wednesday in Tennessee, but has events scheduled in Ohio beginning Friday.

Politico’s Alexander Burns notes that the Ohio contest has already started, with the campaigns and the super PACs having spent more than $4 million — and there is more to come before next Tuesday’s primary.

As Shields pointed out on Tuesday’s NewsHour, Santorum’s infrastructure is showing in Ohio. He’s not on the ballot in several districts there.

Natasha Loder, midwest correspondent for The Economist, was arrested for sitting in the doorway at #Romney event yfrog.com/nx8l2evj #tcot

If Newt tells a story about a tree falling, and nobody knows what the heck he’s talking about, does it make a sound?

President Obama issued a lengthy statement detailing Snowe’s history-making service in both the Maine legislature and Congress. “From her unwavering support for our troops, to her efforts to reform Wall Street, to fighting for Maine’s small businesses, Senator Snowe’s career demonstrates how much can be accomplished when leaders from both parties come together to do the right thing for the American people,” he said.