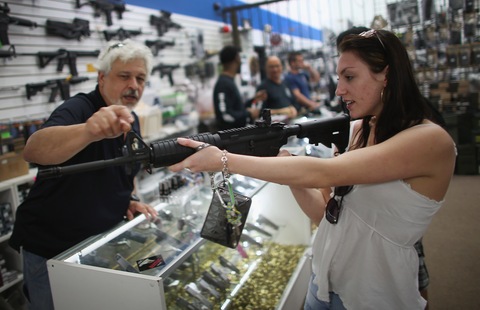 Gun control advocates hailed Thursday’s Senate vote allowing debate to move forward on a sweeping package of legislation as a victory for their movement. But things are just getting started, and any measures that curb access to guns are a long, long way from reaching President Barack Obama’s desk.

The 68-31 procedural vote sets up a lengthy debate on big questions: How expansive should a background check system be? Where should you be able to carry a weapon under your clothes? Should schools set up different protections? From here, it could take more than a week to get through the legislation. Senate Democrats said the first votes on amendments will be “early next week.”

Roll Call’s John Gramlich rounds up the five amendments to watch when the Senate returns Monday afternoon to pick up where lawmakers left off.


(Of the 16 Republicans who voted in favor of bringing the measure up for debate, 13 have dined with the president in recent weeks, as Mr. Obama has sought to bridge differences with GOP lawmakers on guns, immigration and the budget.)

Sens. Mark Pryor of Arkansas and Mark Begich of Alaska were the lone Democrats opposing the procedural vote to begin debate. They have more in common than a first name; both hail from rural states with strong hunting cultures. Both are likely to maintain their spots in the 2014 midterm election’s top-tier of vulnerable Democratic incumbents.

Todd Zwillich of WNYC summed it up, telling the NewsHour on Thursday that advancing to debate doesn’t guarantee a thing.

“Republican senators didn’t want to be associated with obstruction,” he said. “They can do that procedural vote and not be in trouble with NRA. There are a lot of firewalls between now and something becoming law.”

Zwillich noted that some GOP senators who voted to move toward the debate “won’t ever” vote for the overall bill. “If you are a senator with a lifetime positive voting record from NRA, one vote proceeding to debate is not like voting for universal registry or something like that,” he said.

Zwillich said the presence of families and parents of the children killed in the December school shooting in Newtown, Conn., has shifted the conversation and is impacting how lawmakers view the issue. After what happened in Newtown, Aurora, Colo., and Tucson, Ariz., lawmakers “don’t want to be seen as not willing to be having a debate on the issue.”

NBC reports that former Arizona Rep. Gabrielle Giffords, who was wounded in that Tucson shooting in 2011, will return to Capitol Hill next week. The gun safety group she and her husband Mark Kelly founded will begin robocalls in Pennsylvania and West Virginia in support of Sens. Pat Toomey and Joe Manchin, the Republican and Democrat, respectively, who forged bipartisan agreement on a background checks expansion.

Politico’s Mike Allen and Jim VandeHei have more on the Newtown families’ lobbying efforts this week:

When a lobbyist for families of Newtown shooting victims called the office of Sen. Susan Collins (R-Maine) to set up a meeting, the first response was a standard D.C. offer. They could get a meeting with her staff, and a quick and simple “hello” from Collins herself, they were told.

The families’ answer: Not good enough. According to their lobbyists, the families have a rule against staff-only meetings: they won’t do them. They insist on sitting down with the senators themselves.

That rule is just one of the ways that the Newtown families, political novices just a few months ago, are proving to be savvy, effective advocates as they promote the gun legislation that has finally begun to move through the Senate. The families are well-educated, and many are well-off.

They have been polished and sharp on TV. They’re mostly non-political, but quite accomplished in their own fields. With access to money and media, they’re using persistence, visibility — and, most all, their unique moral authority — to help prod Senate action. They also have their own lobbyists — several of them, in fact.

The Hill’s Russell Berman notes there has been scant effort to bring House Republicans along to support gun control measures, a major contrast with how senators are handling immigration overhaul.

The Washington Post examines how geography changes the political calculus on guns for members of Congress.

As the debate continues, the NewsHour has you covered.

Watch Judy Woodruff’s report on the issue here or below:

Cassie M. Chew pulled together an explainer of the legislation as it stands. You can also follow our comprehensive coverage of the gun debate here.

CT Sen. Chris Murphy doesn’t want FOX to air the Sprint Cup because the NRA is sponsoring it politico.com/blogs/media/20…

Club for Growth adds Greg Walden to list of Republicans its seeking primary challengers for.

Maggie Thatcher and Strom Thurmond in a tuxedo for the ages, c/o @beschlossdctwitter.com/BeschlossDC/st… attn: @jmartpolitico

Boehner says that the Hastert Rule “was never a rule to begin with.”

Still don’t get the big deal about “secret” tapes of McConnell campaign. EVERY campaign – D and R – does the same thing.