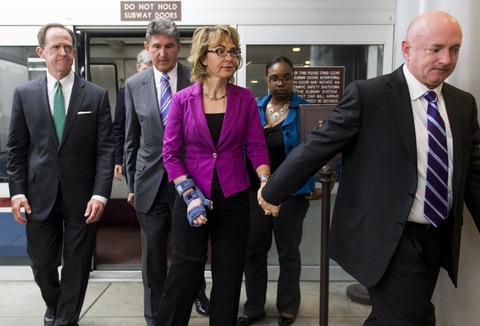 Emotional appeals. A tense week on Capitol Hill. A moment of truth, for some.

The Senate on Wednesday will begin voting on a series of amendments to a sweeping gun control package. And most indications are that advocates for expanding a background check system for gun purchases — a key provision of the bill — are several senators short of their goal.

“We will not get the votes today,” Sen. Joe Manchin, D-W.Va., told NBC’s Kelly O’Donnell on Wednesday.

On MSNBC’s “Morning Joe,” Manchin said he has “over 90 percent” of Senate Democrats on board and needs just nine Republicans to join them to secure the 60 votes for his compromise measure. A statement released by his spokesman Wednesday morning said: “Senator Manchin remains optimistic and hopeful … I see no reason to bet against [him] today. He will continue to explain his bill to his colleagues and anyone with concerns until the minute they vote.”

But nine votes, at this point, seems impossible.

Still, the NRA is out with a last-minute ad urging senators to vote against expanded background checks. The spot mocks New York City Mayor Michael Bloomberg.

“Tell your senator listen to America’s police instead of listening to Obama and Bloomberg,” the narrator says.

The advocacy doesn’t stop there.

We hear that eyes were glistening during a party caucus meeting, as Manchin outlined the amendment forged with Sen. Pat Toomey, R-Pa. He asked some of the Democratic holdouts — including Arkansas Sen. Mark Pryor and Alaska Sen. Mark Begich to back their measure.

Senators talked about gun-related tragedies in their states, from Newtown, Conn., to the Virginia Tech massacre.

Former Rep. Gabrielle Giffords of Arizona and her husband Mark Kelly were there too, highlighting the gun control movement’s urgency.

Kelly and Giffords appeared before Senate Democrats — including six still undecided on the measure — at the caucus’s weekly policy lunch. They later addressed a bipartisan crowd at the dedication of a room in the Capitol Visitor Center to slain Giffords staffer Gabriel Zimmerman, one of six people shot and killed in the 2011 Arizona mass shooting that rendered Giffords incapable of continuing her congressional service.

The poignant ceremony was marked by moments of awkwardness, as Kelly noted in his remarks the destructive power of high-capacity magazines that Congress cannot find enough votes to restrict.

Giffords’ friend, Sen. Jeff Flake, R-Ariz., was also at the ceremony, a day after he announced he could not support the bipartisan background check agreement.

Late Tuesday afternoon, Sen. Dean Heller of Nevada, who was one of three Republicans left on the board, announced he would not support the deal.

Kelly told reporters Tuesday that his group would work to replace the freshman senator if he votes “no” on gun legislation that would expand background checks, despite his strong friendship with Flake. He added that it seemed like Flake hadn’t read the proposal.

The Senate still plans to forge ahead.

Here’s the basic layout of the series of votes expected to begin Wednesday at 4 p.m. ET. Each needs 60 votes to pass.

Manchin and others have said that even if the background checks measure fails Wednesday, their push is far from over. They also hail the day’s events as momentous, given it’s been decades since any major gun legislation passed Congress.

The FBI continues to investigate the explosions in Boston, with as few answers as the day before.

Given what we now know about what took place, the FBI is investigating it as an act of terrorism. Any time bombs are used to target innocent civilians it is an act of terror. What we don’t yet know, however, is who carried out this attack, or why; whether it was planned and executed by a terrorist organization, foreign or domestic, or was the act of a malevolent individual…

It will take time to follow every lead and determine what happened. But we will find out. We will find whoever harmed our citizens and we will bring them to justice. We also know this — the American people refuse to be terrorized.

He encouraged citizens to contact authorities if they see anything suspicious in the coming days and promised more updates once investigators learned more information. The White House also announced that Mr. Obama will speak Thursday at an interfaith service in Boston.

The NewsHour offered extensive coverage Tuesday of the situation.

Kwame Holman walked through the facts in a video piece, and Jeffrey Brown received updates from a public radio reporter in Boston.

Social media producer Colleen Shalby rounded up some of the tributes from news organizations, sports stars and others that have surfaced online.

Hari Sreenivasan spoke with the head of Massachusetts General Hospital’s emergency medicine, who described how the hospital has treated patients and noted that one trauma surgeon ran the marathon and then reported to the operating room.

That conversation is here or below:

Gwen Ifill spoke with a former investigator and a terrorism expert to gain fuller sense of the authorities’ approach. Science reporter-producer Jenny Marder pointed out in this blog post the bombs were likely homemade rather than military-grade or dynamite, because of the lighter color of their smoke. Watch Gwen’s conversation here or below.

Christina talked with Howard Kurtz and Lauren Ashburn from the Daily Download team about how the Internet became a place for both helping and healing, and found the world showing an outpouring of love for Boston.

In a related story, one Boston Marathon runner used Facebook to try and help track down a couple who consoled her after the blast. They gave her their medal for crossing the finish line, and she wants to return it. And we highly recommend reading this incredible story from the New York Times’ Tim Rohan the before and after of the moment captured in one of the bombings’ most notable photos.

As always, the Senate is just a tedious exercise in delaying the inevitable. Have fun making ads off failed votes today, boys.

If you’re in Boston without phone service, use this website to call your family bit.ly/ZxEyPe by @twilio #BostonMararthon

.@wholefoods…Who’s the bigger menace – @timryan or Kim Jong-un? But seriously, congrats on the recognition, Tim! twitter.com/PatrickMcHenry…

Correction: Sen. Joe Manchin told NBC’s Kelly O’Donnell on Wednesday, “We will not get the votes today” on the background checks amendment. Manchin did not make that statement on MSNBC’s “Morning Joe.”