Trump called his sexual assault accusers ‘liars.’ He might now have to prove it in court

A Manhattan Supreme Court judge has denied a request from President Donald Trump’s personal attorneys to dismiss a defamation lawsuit filed against him by a former “Apprentice” contestant, the latest development in the many legal battles the president has faced since taking office.

But the defamation lawsuit the judge allowed to proceed on Tuesday presents a different set of challenges. It highlights a different legal strategy for victims of sexual misconduct: suing their alleged abusers over defamation — damage to their reputation — when the abusers can no longer be held directly liable for their actions.

The suit unfolding in New York dates back to October 2016, when Summer Zervos, a former contestant on Trump’s reality TV show “The Apprentice,” alleged that he groped and kissed her in a 2007 encounter. Trump denied the allegations and called Zervos a liar. Trump also dismissed the allegations by more than a dozen other women who accused him of abuse in the final weeks of the presidential campaign.

In her decision allowing the lawsuit to move forward, Justice Jennifer Schecter cited the 1997 Supreme Court case Clinton v. Jones, writing that the ruling “held that a sitting president is not immune from being sued in federal court for unofficial acts.”

Schecter noted that the ruling “left open” whether presidents can be sued in state court over private actions, but concluded that concerns over “federalism and comity” should not block the case from proceeding.

‘Damage to reputation is a legitimate injury’

Defamation lawsuits like Zervos’ often give people who feel they’ve been victims of sexual misconduct an alternative to suing over the alleged sexual abuse. Often they cannot file lawsuits over the misconduct itself because the statute of limitations has passed, so a defamation suit becomes a viable alternative.

In Zervos’ case, “it’s not suing on the initial or original injury of sexual misconduct, but it’s suing on the injury of being called a liar by a presidential candidate,” said Naomi Mezey, a law professor at Georgetown University. “Damage to reputation is a legitimate injury.”

Trump’s personal attorneys requested that the case be dismissed or halted, arguing that U.S. presidents are immune to suits in state court over their personal conduct, and Schecter heard oral arguments on the merits of the lawsuit in December.

If the suit moves to trial, Trump’s attorneys would need to prove that his comments didn’t amount to defamation. They’ve argued that Trump can’t be held responsible for the remarks he made because they were said during a heated presidential campaign, and that those comments amount to political speech protected under the First Amendment.

But the way Trump delivered the remarks could impact the case. Since Trump definitively claimed that his accusers were lying, legal experts said his choice of words might be interpreted as a statement of fact instead of an opinion. Statement of facts are subject to more scrutiny in defamation cases.

“Because he was so definitive, it’s more harmful for him,” said Jessica Levinson, a professor at Loyola Law School, Los Angeles. 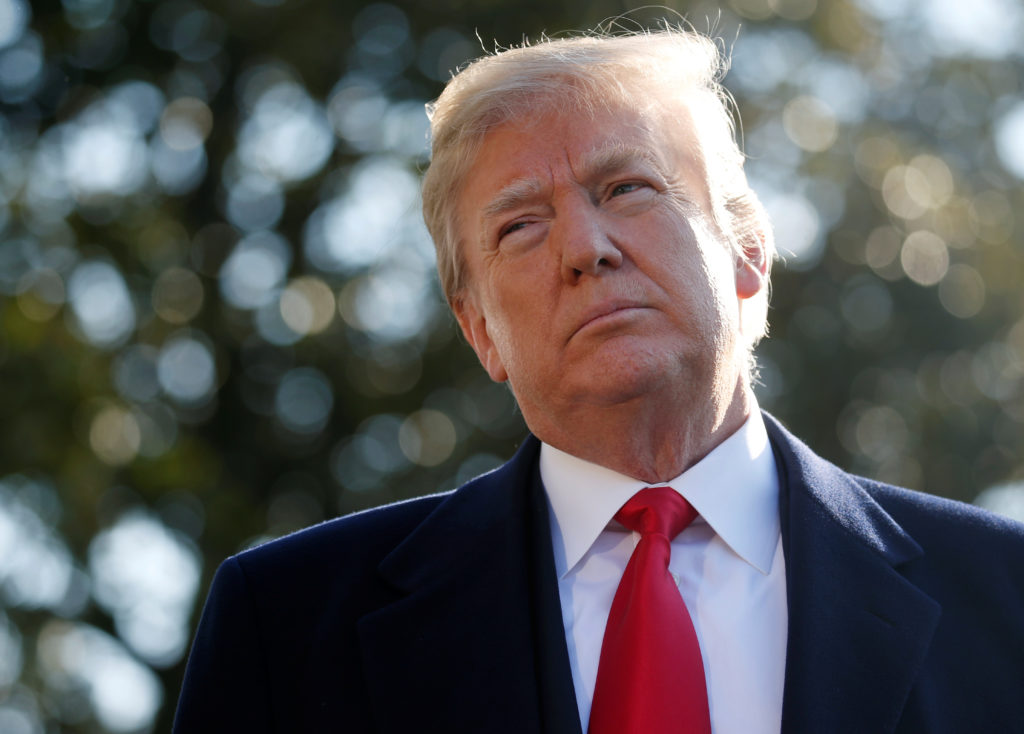 President Donald Trump speaks with the news media before boarding Marine One helicopter from the South Lawn of the White House in Washington, on March 13, 2018. Photo by Leah Millis/Reuters

Previous court rulings have determined that remarks accusing people of lying aren’t always considered protected opinion under the constitution. The Supreme Court case Milkovich v. Lorain Journal, for example, “explicitly rejected the argument that there is special First Amendment opinion protection in a defamation case centered around calling the plaintiff a liar,” according to Fordham Law professor Benjamin Zipursky.

Plaintiffs in defamation cases generally have to prove a number of things to convince the court that a defendant’s comments were defamatory. Primarily, they need to show that the defendant made a false statement of fact, and that the statement harmed the plaintiff’s reputation.

For Zervos, one way to prove that Trump made a false statement would be to show somehow that he actually groped and kissed her. If she can do that, it would mean Trump made a false statement when he dismissed the allegations as lies. But if Trump can prove that he never kissed or groped Zervos, it would mean the statement he made was not defamatory because it was never false in the first place. “It’s like a trial within a trial,” Levinson said.

In defamation cases, judges can also look into whether a plaintiff is considered a public or private figure. That determination affects how much the plaintiff is required to prove.

If Trump can prove that he never kissed or groped Zervos, it would mean the statement he made was not defamatory.

If Zervos is considered a private figure, she would simply have show that Trump did not act with a reasonable level of care in ascertaining whether the statement was true before making it, according to Zipursky.

Since Zervos appeared on an episode of “The Apprentice,” and since she accused Trump of misconduct at a press conference, she may be deemed a public figure — or at least what’s known as a limited purpose public figure, according to Laurence Winer, an emeritus law professor at Arizona State University.

A limited purpose public figure is defined as an individual who “voluntarily and prominently participates in a public controversy for the purpose of influencing its outcome.”

If a judge determines that Zervos fits that category, she would have to prove that Trump made his comments with “actual malice,” meaning that he knew his remarks were false, or that he made them with reckless disregard toward the truth. That is harder for a plaintiff to prove, said Robert Rabin, a Stanford Law School professor.

In March 2017, Zervos’ attorneys subpoenaed Trump’s campaign, demanding that it produce documents pertaining to “any woman alleging that Donald J. Trump touched her inappropriately.” The subpoena requested documents including notes, photographs, sound recordings, emails and other forms of communication. It remains unclear, however, what information the documents contain and if they would show that Trump committed the acts of which Zervos and other women accused him.

The release of the documents was put on hold while Schecter considered whether the case should move forward. Despite her ruling Tuesday, both sides can make an appeal, meaning that the fight over the merits of the lawsuit could continue for months if not longer.

If the court were to ultimately rule that Trump’s comments harmed Zervos’ reputation, he would be forced to pay damages to the plaintiff. Zervos is seeking an apology and “at least” $2,914 in damages.