Trump is doing more to divide the country than unite it, poll says

Nearly a year after his inauguration, most Americans think President Donald Trump is doing more to divide the country than unite it, according to a new poll from PBS NewsHour, NPR and Marist.

Nearly two-thirds of U.S. adults say the president is driving people apart — a number that has remained largely unchanged since February 2017. That was true across age, race, gender, party lines and all parts of the nation.

Mr. Trump is “doing very well with his base, and it’s extremely divided,” said Barbara Carvalho, director for Marist Poll. “But if you look at America as a whole, you don’t get a lot of positive numbers.”

More than half of U.S. adults — 53 percent — disapprove of Trump’s performance as president — a number that has remained largely consistent even during his administration’s honeymoon phase last year, according to polling data from Marist and the NewsHour. So far, Trump’s presidency is a failure, according to a majority of Americans, and roughly the same percent of Americans have a not-so-great impression of the president. 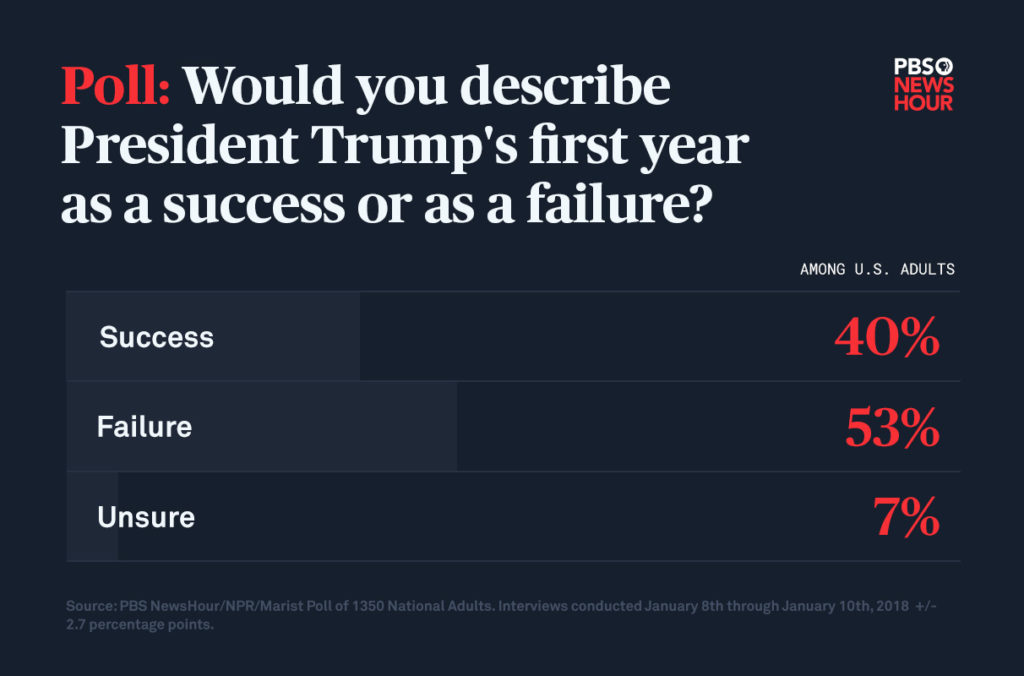 According to the latest PBS NewsHour, NPR and Marist poll, 53 percent think Donald Trump’s presidency has been a failure.

According to the poll, many people don’t think Trump tries to help the average American. Overall, 64 percent of U.S. adults say Trump’s big win — pushing tax reform through Congress and signing it into law — does more favors for businesses than working people. Similarly, 60 percent of U.S. adults think his policies are designed to benefit the wealthy, and 25 percent of respondents said he wants to help the middle class. Only 2 percent of Americans said his efforts are more geared toward improve life for low-income people.

Jennifer Henry thinks Trump is doing exactly what he promised to do during his presidential campaign and since his inauguration. Henry, a 28-year-old graduate student and Democrat from Cedar Rapids, Iowa, is earning her doctoral degree at the University of Minnesota, and said she “was afraid of that then,” and is afraid of it now, as he’s enacting policies like tax reform and rolling back initiatives designed to curb climate change.

Trump is alienating Americans, both at home and abroad, in ways that could reverberate for years, Henry said.

“He and Congress have made a lot of policy changes that will harm the country for a long time,” Henry said, adding with a wry laugh: “It seems like every week there’s a new one.”

During his first year in office, Trump has demonstrated time and again (and again and again) that Twitter is his preferred platform for getting his message out to the public. He tweeted more than 2,500 times in 2017, according to Business Insider, which works out to an average of about seven times a day, the Boston Globe said in its own analysis of Trump’s tweets while president.

But when asked if their president should sit in the eye of a tweetstorm, 78 percent of Americans believe that is a risky way to communicate. It’s one of the few things on which most Democrats, Republicans and political independents agree.

Paul Smith, a 67-year-old retiree in Cedarville, Michigan, said people — including those from the party that nominated him — need to give the president a chance to lead. He wants Trump to focus on the economy and stifling drug traffickers with a wall along the Mexican border.

Trump “gave us a lot of things when he ran for office that he would like to do,” Smith said. “We need to give him an opportunity to do those things.”

But Allison Flanscha, a stay-at-home mother of two and lifelong Republican who lives in Loveland, Colorado, said she couldn’t bring herself to vote for her party’s presidential nominee during the 2016 election because Trump “is divisive” and “needs to control his tongue and he needs to control his thumbs on Twitter.”

“He just represents his own values and desires and doesn’t take into consideration the view of the nation,” she said. “You’re president. Stop tweeting.”

Left: Nearly a year after his inauguration, most Americans think President Donald Trump, seen here taking the oath of office in 2017, is driving the nation apart rather than uniting it. Photo by REUTERS/Lucy Nicholson.