The poll also showed that 58 percent of Americans say they trust their favorite news outlet more than President Donald Trump. This was especially true among Democrats and people who identified as politically independent. Nearly one-third of Americans — 29 percent — said they trust Mr. Trump more than the media, a figure that has remained largely unchanged since October and remains particularly true among Republicans. 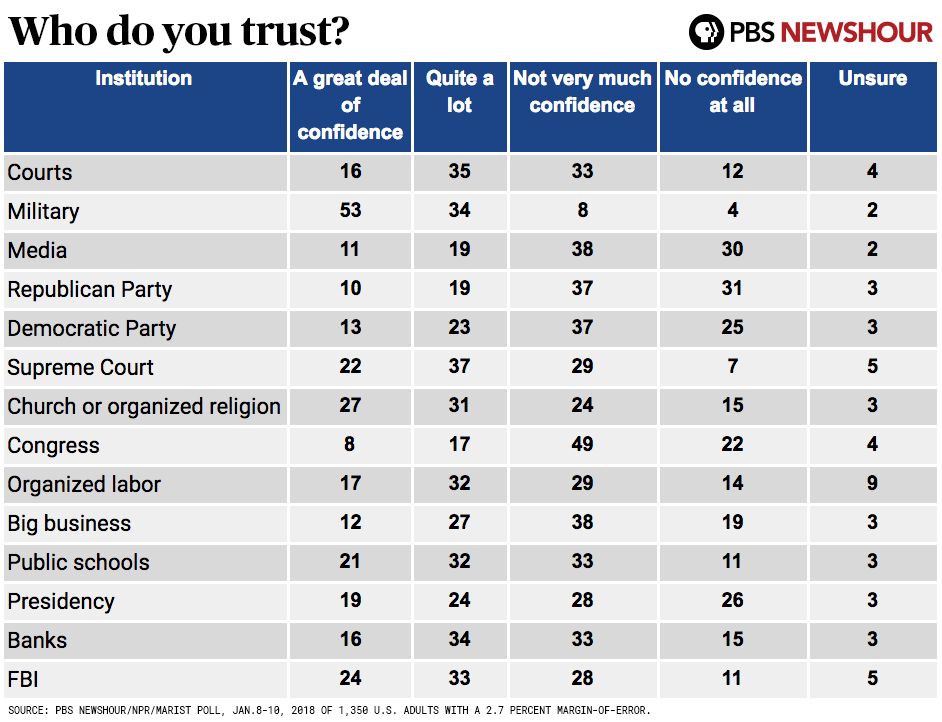 The issue of how much the public trusts the president will likely spill into 2018, as special counsel Robert Mueller continues his investigation into Russia’s role in the 2016 presidential election and possible ties to Trump’s campaign.

Mueller’s probe, along with multiple congressional Russia investigations, have in recent months widened to include people who are or were close to Trump, including former White House strategist Steve Bannon, who testified Tuesday behind closed doors before the House Intelligence Committee.

Bannon was fired from his post at the White House last August. Last week, he stepped down from the Breitbart News Network, where he had served as executive chairman, after a public break with the president over a new book that details Trump’s first year in the White House.

The issue of how much the public trusts Trump will likely spill into 2018 as special counsel Robert Mueller’s investigation continues.

High-profile events like Bannon’s testimony and Manafort’s upcoming trial will ensure that Mueller’s probe remains in the spotlight for months to come.

Still, 42 percent of Americans said they have never heard of Mueller, who was appointed by Deputy Attorney General Rod Rosenstein in May to lead the federal government’s investigation into possible links between Russia and the Trump campaign. Those who have heard of Mueller are perfectly split when asked what they think of him, with 29 percent of U.S. adults having a favorable impression of Mueller and another 29 percent saying they do not.

“Not a lot people know a lot about him,” said Lee Miringoff, who directs the Marist Institute for Public Opinion. “He would not have a reservoir of public opinion to fall back on.”

Half of the country said Mueller’s investigation is fair, 23 percent of U.S. adults said they weren’t sure, and more than a quarter of respondents — 28 percent — called the investigation unfair. Responses skew along political lines, with Democrats far more likely to say Mueller and his team are conducting an ethical investigation of the president than Republicans. Nearly half of people who identify as politically independent say the same.