CHARLOTTE, N.C. — Debi White is just the kind of voter former Vice President Joe Biden needs to win the election: a college-educated, suburban woman in a battleground state who is turned off by President Donald Trump’s personality. The only problem: White doesn’t like Biden, either.

“I just don’t feel comfortable with either one of them,” said White, who works in commercial real estate in Matthews, a suburb of Charlotte, North Carolina, and is registered as an unaffiliated voter. White said she found Trump’s demeanor offensive, but didn’t think Biden was an exciting alternative.

The presidential election, White said, feels like a choice between “the jerkwad candidate, or the candidate that doesn’t seem strong.”

An increasingly moderate suburban electorate in the once overwhelmingly conservative counties surrounding Charlotte, Raleigh and other North Carolina cities has put the state in play for Democrats in recent election cycles. With Trump expected to dominate in rural areas and Biden the heavy favorite in many cities, suburban voters like White in North Carolina — and in other key battleground states such as Michigan, Pennsylvania and Wisconsin — will play an outsized role in determining the winner in November.

Both political parties have aggressively courted suburbanites for the past two decades; they were key to Trump’s victory in 2016, when he won 50 percent of the suburban vote over Hillary Clinton’s 45 percent, according to exit polls. But in his reelection campaign he has struggled to garner that same level of support.

A recent PBS NewsHour/NPR/Marist poll found Biden leading Trump 56 to 42 percent among suburban likely voters. Trump’s struggles with the critical demographic stem in particular from his changing fortunes among white women, a group that backed him over Clinton by 9 points four years ago. Polls show Trump trailing Biden by wide margins among white women. His support among white college-educated women has flagged even more. He lost the group by just 6 points in 2016, but is now 37 points behind his Democratic challenger in this week’s PBS NewsHour/NPR/Marist poll.

To win in North Carolina, Trump will need to reverse his slide in the suburbs. In recent months, he has targeted white suburban voters — and suburban women — with a promise of restoring “law and order,” stoking fears that widespread protests over racial injustice would spill over into the suburbs by playing on racist associations between people of color and crime in urban neighborhoods. 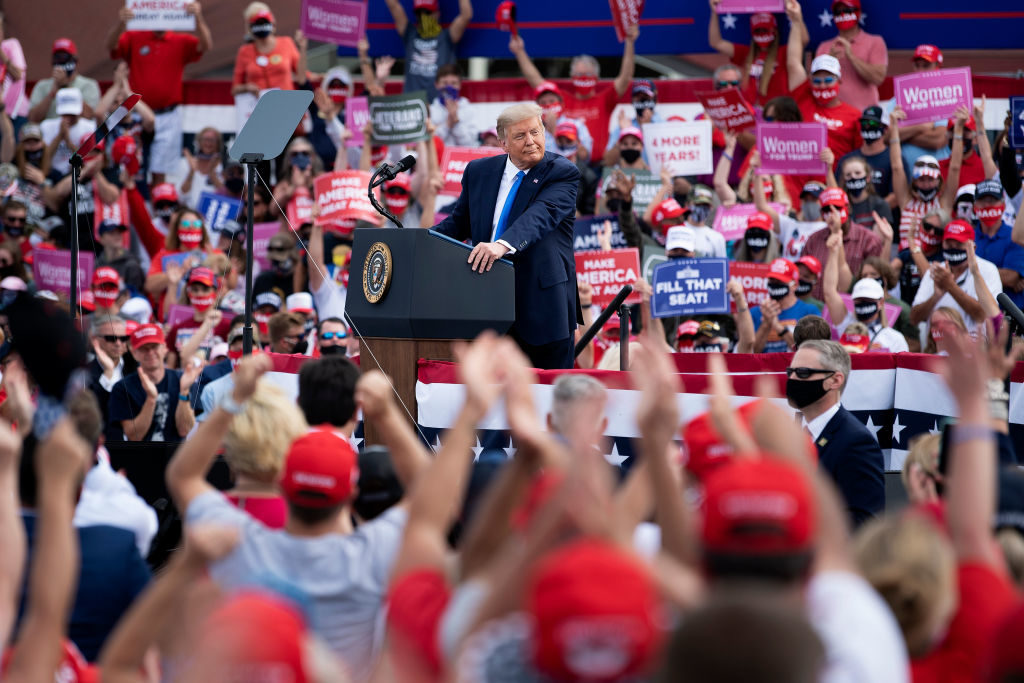 Democrats are hoping suburban voters will see through the rhetoric.

“I don’t think we have that many people who would fall for what [Trump] is saying,” said Bobbi Hague, chair of the Democratic Party in Cabarrus County, a mix of suburbs and rural towns northeast of Charlotte. Hague said Democrats there are focusing their efforts on winning over moderate voters, particularly women, who are hesitating to vote for Trump.

“If Democrats can narrow the gap [outside of urban areas], we have a chance of winning” the state, Hague said.

Democrats are counting on suburban demographic changes continuing to shift in their favor.

Cabarrus County offers a good example of the forces reshaping suburban politics in North Carolina and elsewhere. The area has long been a Republican stronghold — in presidential elections from 1980 through 2004, the Republican nominee won every time, by an average of 29 points.

But the Democratic Party has gained ground in Cabarrus in the last three elections thanks to an influx of left-leaning transplants from Charlotte as well as New York, New Jersey and other states in the northeast. Starting in 2008, the Republicans’ margin of victory in the county has dropped to an average of 19 points each election — still a sizable gap, but far less than it was under Presidents Ronald Reagan and George W. Bush.

Former President Barack Obama, who won North Carolina in 2008, was the first and only Democrat to do so since 1976. But the last three presidential elections in the state have been decided by less than four percentage points, and the state is a toss-up again this year. Biden has a 1.4-point lead over Trump in the polls, according to RealClear Politics’ polling average, underscoring both the uptick in Democratic voters moving to the suburbs, as well as a growing number of moderate Republicans who are turned off by Trump.

The shifting political landscape also reflects changes in the racial and ethnic makeup of America’s suburbs. Nationally, 81 percent of suburban residents in 1990 were white, but that figure dropped to 65 percent by 2010, according to U.S. Census data. A 2018 study by Pew found the country’s suburban population to be 68 percent white.

North Carolina has been at the forefront of this demographic shift. Between 1990 and 2010, the Hispanic populations in the Charlotte and Raleigh metropolitan areas grew faster than anywhere else in the country. The state’s two largest metropolitan areas also ranked in the top ten fastest-growing populations of Black and Asian Americans.

The facts stand in stark contrast to Trump’s rhetoric around race and suburbia.

Trump is stuck in an idea of the suburbs where things are carefully constructed and meant to be lily-white.”

“You hear the term dog whistle. For me, a lot of what Trump says are air horns” aimed at scaring white suburbanites into voting for him over Biden, said Brad Dickerson, a biology professor at UNC-Chapel Hill who lives in Carrboro, a liberal enclave near the university. Dickerson, who is Black, added that the president seemed to be holding onto a belief that the suburbs are overwhelmingly white, despite all the statistics proving they are increasingly diverse.

“Trump is stuck in an idea of the suburbs where things are carefully constructed and meant to be lily-white. That’s not how it is” anymore, Dickerson said.

The president has claimed Democrats’ calls for police reform in the wake of several police killings of Black Americans would lead to a spike in crime in suburban communities. “They want to destroy our suburbs,” Trump said on a call to supporters over the summer.

In July, the Trump administration announced plans to end an Obama-era program  that was meant to help reduce residential segregation in suburban communities. In a tweet, Trump claimed the move would protect suburbanites from being “bothered or financially hurt by having low income housing built in your neighborhood.” 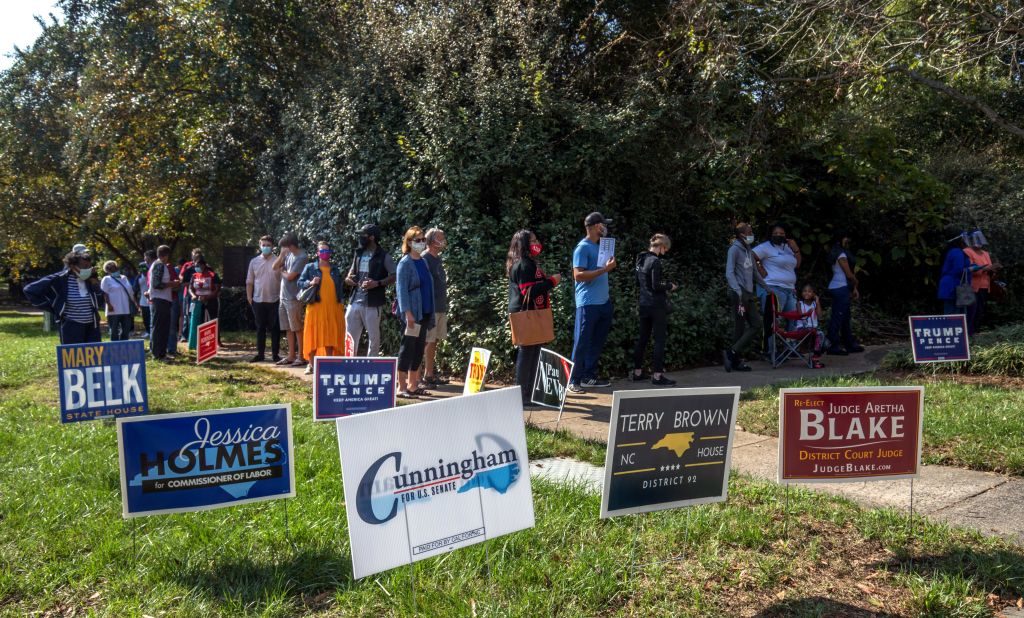 Voters in Charlotte, North Carolina, wait in line to cast their ballots at the West Boulevard branch of the Mecklenburg County library on October 15, 2020, the first day of early voting. (Photo by Grant Baldwin / AFP) (Photo by GRANT BALDWIN/AFP via Getty Images)

Trump’s law-and-order message has resonated in some ways with suburban Republican voters in North Carolina.

In recent interviews in suburban communities across the state, Trump supporters said they did not feel an immediate sense of danger in their own communities. But several said they believed it was possible that the protests that took place in Charlotte and Raleigh over the summer could spread to their neighborhoods.

“It’s far enough away from here that I don’t think it would come here, but you never know,” said Donald Shilesky, a Republican who lives in Carolina Preserve, a sprawling development in the Raleigh suburb of Cary.

Shilesky said that criticism of Trump’s rhetoric on race came from liberals who did not appreciate his blunt, unconventional approach to politics and governing. “He’s very blusterous, he’s a very in-your-face kind of guy. And he’s a business guy, which is very important to me. I enjoy the fact that he’s not a career politician,” said Shilesky, a retired environmental consultant.

Anita Brown, the vice-chair of the Cabarrus County Republican Party, said she supports people being able to protest, but that many conservatives watching the protests were concerned with the “rioting and destruction,” adding, “what’s front of mind is the real disgust with the fact that it’s happening and people are letting it happen.”

“I’m not nervous about looters and rioters. Not out here,” said Brenda Kalt, a retired software writer who lives in the same subdivision as Shilesky. Kalt added she was eager to see Trump leave office. “He lies. He’s not a nice man. He’s not who I want being the face of the United States to the world.”

Democrats’ anger with Trump also includes his treatment of women, immigration policies and handling of the coronavirus pandemic, said Christine Kelly, a council member in Holly Springs, a suburb of Raleigh.

“With the recent upheaval in our society, folks are motivated to step up and say things that are going on under Trump aren’t right,” she said.

In the final weeks of the election, Democrats are focused on boosting turnout among Black voters, a key group that helped power Obama to victory in North Carolina in 2008, as well as older Democrats whose politics align with Biden’s moderate brand, said David Dixon, the chair of the Durham County Democratic Party.

“Our older electorate, they have strong enthusiasm for Joe Biden because he offers them a sense of normalcy and practical, very incremental change,” Dixon said.

Dixon said the party in Durham County, a critical base for Democrats in the state, was also focused on turning out left-leaning voters who may feel disengaged with the political process but are nevertheless eager to see Trump lose. “We also have folks who are more motivated to put Trump out of office than put Biden in office,” he said. 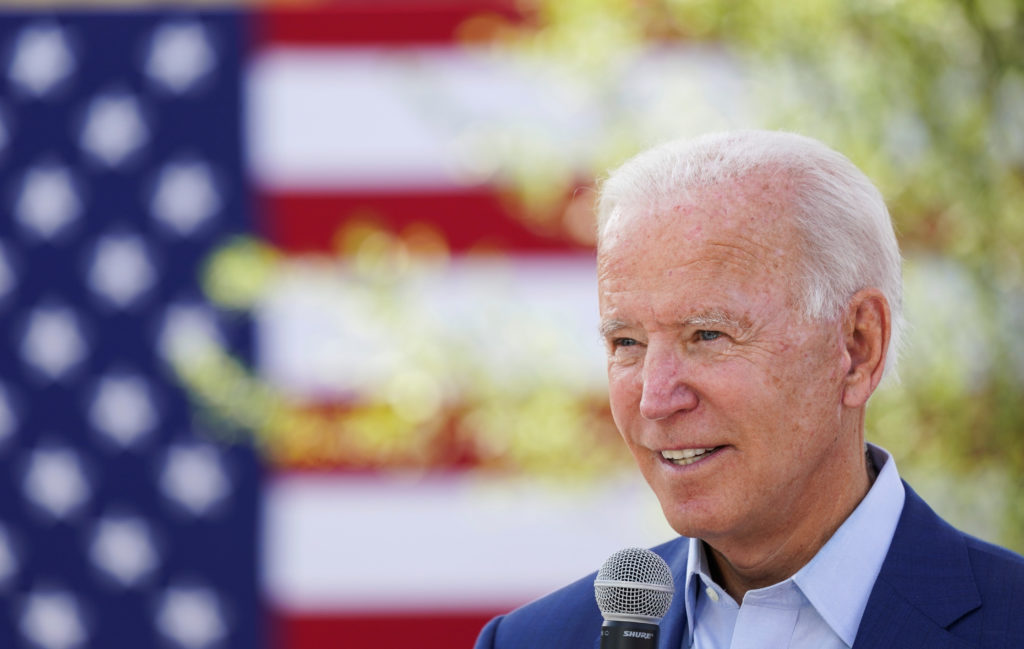 The Biden campaign has also included North Carolina in a television and digital ad blitz criticizing Trump’s handling of the coronavirus pandemic.

North Carolina has had more than 236,000 cases of COVID-19, according to the state’s latest figures. Like many other states, North Carolina experienced an increase in infections in recent weeks as schools reopened and summer turned to fall.

The state was a flashpoint in the national debate surrounding the pandemic earlier this year, highlighting the partisan differences over how the virus should be handled.

The 2020 Republican National Convention was slated to be held in Charlotte, but Gov. Roy Cooper, a Democrat, refused to approve the RNC and Trump campaign’s plan to move forward with a large in-person convention during the pandemic. After a standoff the campaign backed down and announced plans to hold the nominating convention in Jacksonville, Florida, instead. But a coronavirus outbreak in Florida scuttled that plan as well, and the RNC’s main events were ultimately staged in Washington, D.C.

Republican voters in North Carolina defended Trump’s handling of the public health crisis, including his response after testing positive for COVID-19 earlier this month. Trump spent three days in the hospital before returning to the White House, and has resumed campaign activities.

WATCH: How populism, political will and public fatigue are undermining global COVID-19 fight

On a recent afternoon, Trump-supporter Wayne King stopped by the Cabarrus County GOP office to pick up some campaign literature. The storefront office was bustling with workers and visitors picking up yard signs for Trump and Republican Sen. Thom Tillis, who is in a tough reelection battle that could help determine control of the Senate next year.

King said he believed the election in North Carolina would ultimately come down to a matter of political ideology, not the debate over race or the coronavirus. King is a registered unaffiliated voter who voted twice for President Bill Clinton in the 1990s. But he could not see himself casting a ballot for Biden.

“The Democrats have gone so far left that I can’t support anyone from the party until they bring it back to the center,” King said.

Brown, Cabarrus County’s Republican vice-chair, said she was confident Trump could hold onto the state if the outcome comes down to the suburban vote. “It’s gradually changing,” she said, “but right now it’s still heavily Republican.”