WASHINGTON — As Washington braces for this week’s expected vote to impeach President Donald Trump, partisan battle lines hardened on Sunday, with Democrats defending impeachment even if Trump isn’t removed from office and Republicans denouncing the integrity of the constitutional process.

The Democratic-controlled House planned to vote Wednesday on two articles of impeachment against the Republican president, and the decision whether to make Trump the third U.S. president in history to be impeached was expected to play out along party lines. There is some debate between the White House and GOP-run Senate about the contours of the Senate trial anticipated in January, but there seems little doubt the Senate would acquit Trump.

But a seemingly predetermined result has not convinced Democrats that their impeachment effort, which was prompted by Trump’s push to have Ukraine investigate a Trump political foe, was in vain. Framing the matter as a national security issue, the chairman of the House committee that led the investigation insisted it was “not a failure in the sense of our constitutional duty in the House.”

“This misconduct goes on, the threat to our election integrity coming up goes on,” said Democratic Rep. Adam Schiff of California, who heads the House Intelligence Committee. “It’s a clear and present danger, I think, to our democracy, and not something that we can turn away from simply because the Republicans in the House refuse to do their duty, and continuing to put the person of the president above their personal obligation.” 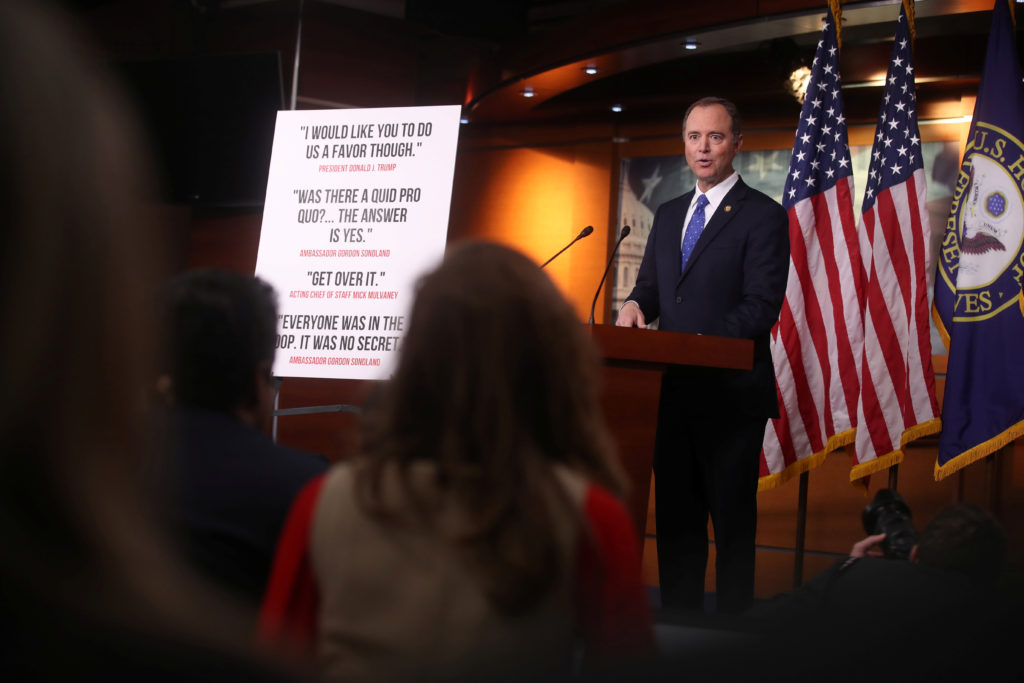 Democrats expect support for impeachment from all but a few of their members; no Republicans are expected to join them. From the beginning of the inquiry, Trump has tried to cast it as a purely political effort by Democrats to undo the result of the 2016 election.

Trump is accused of abusing his presidential power by asking Ukraine to investigate his 2020 rival Joe Biden while holding American military aid as leverage, and obstructing Congress by blocking the House’s efforts to investigate his actions.

Trump has lashed out repeatedly against impeachment and has told confidants that even if he is acquitted in the Senate as expected, it will be a stain on his legacy.

“The Impeachment Hoax is just a continuation of the Witch Hunt which has been going on for 3 years. We will win!” Trump tweeted Sunday.

But he also has said he believes impeachment could be a political winner, citing reelection campaign data that shows his fundraising, rally attendance and poll numbers in battleground states have all increased since the inquiry began.

The White House has showcased a series of recent victories, including the new trade deal with Mexico and Canada, as evidence that the president is focused on governing while drawing a contrast with Democrats they claim are focused on impeachment. Cabinet officials have been advised to be prepared to roll out events early next year to highlighting accomplishments while the Senate trial is expected to be going on. 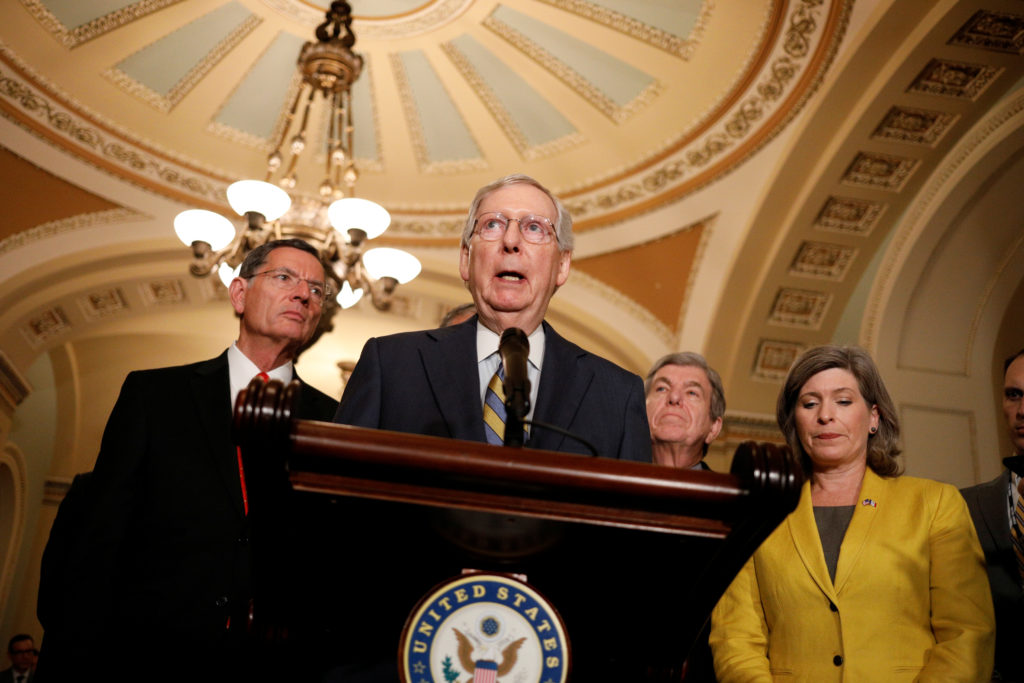 Falling back on his reality TV roots, Trump has mused about pushing Senate Majority Leader Mitch McConnell, R-Ky., to hold a lengthy, showy trial, complete with witnesses, that could sway voters and fully exonerate him. Pam Bondi, the former Florida attorney general hired by the White House to help with impeachment strategy, said Sunday that the matter “goes to the Senate, and these senators — the president deserves to be heard. We should be working hand in hand with them. The rules of evidence will apply.”

McConnell said last week that the Senate was coordinating trial strategy with the White House, a statement that drew sharp criticism from Democrats, but he has expressed a preference for a short trial.

Sen. Ted Cruz, R-Texas, said Sunday that Trump should be able to call witnesses, including Biden’s son Hunter and the whistleblower who reported Trump’s July telephone conversation with Ukraine’s president that is at the heart of the impeachment investigation.

Hunter Biden was on the board of a Ukrainian energy company while his father was vice president, and Trump has alleged without evidence that Joe Biden got a Ukrainian prosecutor fired because the prosecutor was looking into the energy company. In fact, the U.S. and many other Western governments had pushed for the prosecutor’s ouster, believing that he was soft on crime.

But other Republican senators tried to move the White House away from the idea of calling witnesses.

“I’d tell the president, if somebody is ready to acquit you, I’d sort of get out of the way,” said GOP Sen. Lindsey Graham of South Carolina, chairman of the Senate Judiciary Committee. He warned that calling witnesses could mean that Trump administration officials such as Secretary of State Mike Pompeo, blocked by the White House previously from appearing before investigators, could be forced to testify.

“I understand the president’s frustration, but I think what’s best for the country is to get this thing over with,” said Graham. “I clearly made up my mind. I’m not trying to hide the fact that I have disdain for the accusations in the process. So I don’t need any witnesses.” 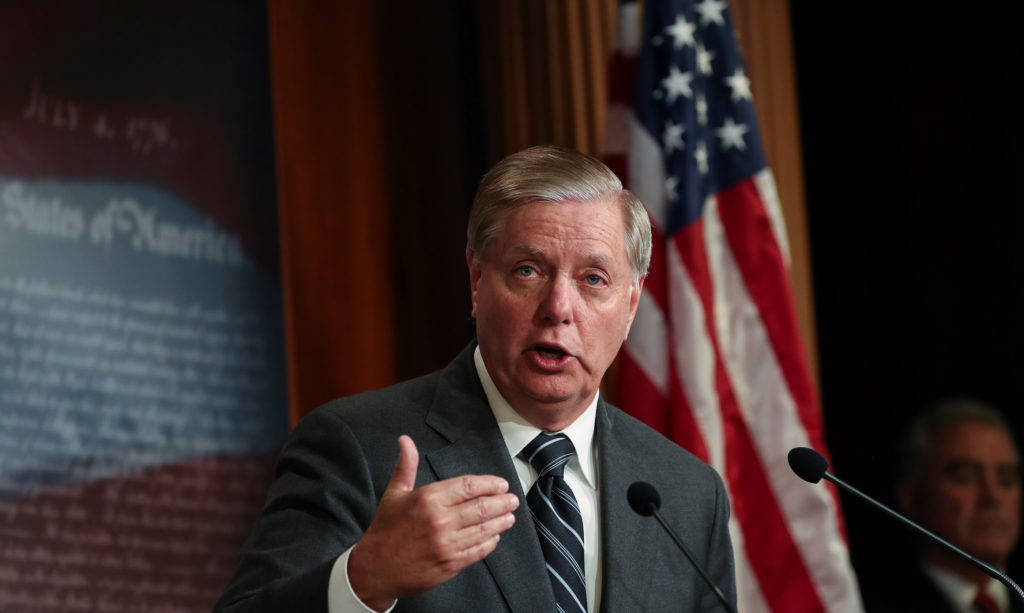 But Graham said that the Senate Judiciary Committee would welcome a briefing from the president’s personal lawyer, Rudy Giuliani, who traveled to Ukraine this month to continue his investigation into the Bidens. Many in the White House have blamed Giuliani for ensnaring Trump in the matter that prompted the impeachment inquiry but the president has continued to support the former New York City mayor and met with him on the White House on Friday.

Giuliani took to Twitter on Sunday to tease the release of what he found in Ukraine. He later tweeted out video clips from a documentary being produced on his trip.

What Senate Democrats see as a rush to judgement from some Republican colleagues has led Democrats to say they fear the trial could become a sham with dangerous consequences.

Sen. Chris Coons, D-Del., said if Trump is “exonerated in the Senate, if the Senate Republican majority refuses to discipline him through impeachment, he will be unbounded.”

“I’m gravely concerned about what else he might do between now and the 2020 election, when there are no restrictions on his behavior,” Coons said.

Trump’s approval ratings have remained relatively unchanged during the hearings and his fellow Republicans have tried to use the proceedings for a political edge, targeting more than 30 House Democrats who represent districts Trump captured three years ago against Democrat Hillary Clinton.

One of those, freshman Rep. Jeff Van Drew of New Jersey, was expected to announce this week that he is changing party affiliations and becoming a Republican. Van Drew had not announced support for impeachment and was polling poorly in his district, according to Democrats.

The chairman of the House Judiciary Committee, which last week approved the impeachment charges, said Van Drew was “reacting to his public polling that shows he can’t get renominated.” Rep. Jerrold Nadler, D-N.Y., stressed that Democrats were not viewing impeachment as political.

“We should not be looking at those things,” he said. “This is the defense of our democracy.”

Schiff, Nadler and Cruz appeared on ABC’s “This Week,″ Graham was on CBS’ “Face the Nation,″ Bondi was on Fox’s “Fox News Sunday” and Coons was on NBC’s “Meet the Press.″

Left: The clerks of the U.S. House Judiciary Committee tally the votes as the committee approves two articles of impeachment against U.S. President Donald Trump and votes to send them on to the full House of Representatives for consideration on Capitol Hill in Washington, U.S., December 13, 2019. Photo by Erin Scott/Reuters.