Former President Barack Obama spoke from Illinois today. The event was streamed by the University of Illinois. Watch his remarks in the player above.

Obama’s speech at the University of Illinois at Urbana-Champaign was delivered less than two months before midterm elections that could determine the course of Trump’s presidency. The remarks amounted to a stinging indictment of political life in the Trump era.

“It did not start with Donald Trump,” Obama said. “He is a symptom, not the cause. He’s just capitalizing on resentments that politicians have been fanning for years.”

Noting the history of former presidents avoiding the rough and tumble of politics, Obama acknowledged his sharp critique of Trump was something of a departure from tradition. But he said the political moment required a pushback and called for better discourse.

“It did not start with Donald Trump,” Obama said. “He is a symptom, not the cause.”

“Appealing to tribe, appealing to fear, pitting one group against another, telling people that order and security will be restored if it weren’t for those who don’t look like us or don’t sound like us or don’t pray like we do — that’s an old playbook,” he said. “It’s as old as time. And in a healthy democracy, it doesn’t work. Our antibodies kick in and people of good will from across the political spectrum call out the bigots and the fear-mongers and work to compromise and get things done and promote the better angels of our nation.”

But, Obama added, when there is a vacuum in democracy, “other voices fill the void. A politics of fear and resentment and retrenchment takes hold.”

Obama called Trump “the symptom, not the cause” of division and polarization in the U.S.

“I’m sorry, I watched it, but I fell asleep,” Trump said at a campaign appearance in Fargo, North Dakota. “I found he’s very good for sleeping.”

Trump said Obama was trying to take credit for this “incredible thing that’s happening to our country.”

Even as he has largely remained out of the spotlight, Obama made clear he’s paid close attention to the steady stream of headlines chronicling the Trump administration and said the news is a reminder of what’s at stake in the November midterm elections.

“Just a glance at recent headlines should tell you this moment really is different,” Obama said. “The stakes really are higher. The consequences of any of us sitting on the sidelines are more dire.”

He later added: “This is not normal.”

Obama was especially stern in his condemnation of Trump’s pattern of pressuring law enforcement officials.

He was especially stern in his condemnation of Trump’s pattern of pressuring law enforcement officials, including Attorney General Jeff Sessions. The president has repeatedly called on Sessions to fire special counsel Robert Mueller and earlier this week blamed the Justice Department for indicting two incumbent Republican members of Congress, arguing the moves could jeopardize their seats.

“It should not be a partisan issue to say that we do not pressure the attorney general or the FBI to use the criminal justice system as a cudgel to punish our political opponents,” Obama said. “Or to explicitly call on the attorney general to protect members of our own party from prosecution because an election happens to be coming up. I’m not making that up. that’s not hypothetical.

As Obama spoke, Trump told reporters aboard Air Force One that he believed Sessions should investigate the identity of the author of an anonymous New York Times opinion piece that was sharply critical of his leadership, saying the essay a “national security issue.” 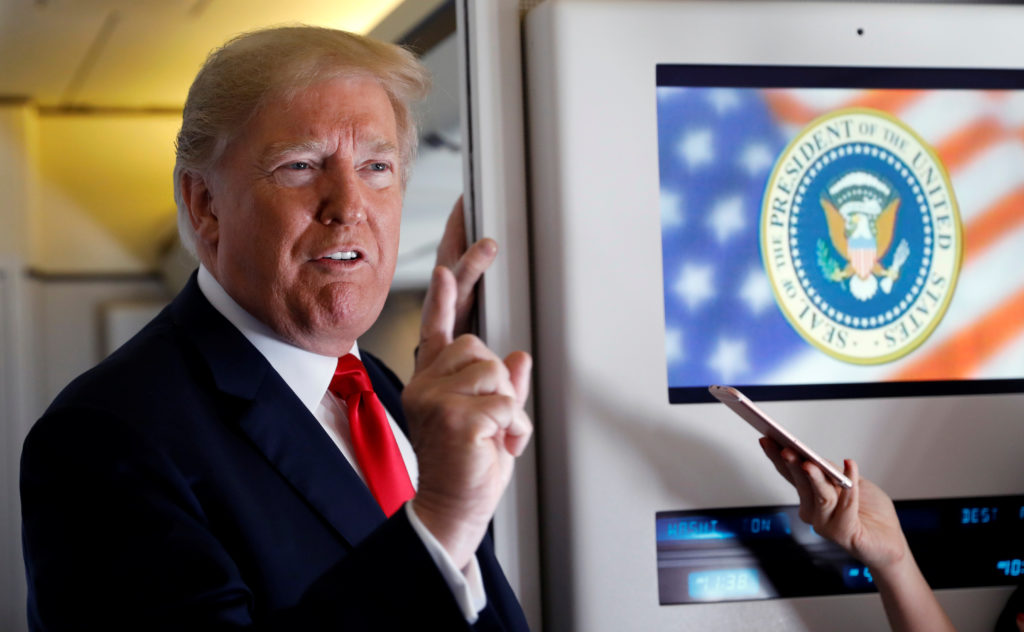 President Donald Trump speaks to reporters aboard Air Force One on his way to Fargo, North Dakota. REUTERS/Kevin Lamarque

Obama, reacting to the op-ed account, said “that’s not how our democracy is supposed to work.”

“The claim that everything will turn out OK because there are people inside the White House who secretly aren’t following the president’s orders, that is not a check,” Obama said. “I’m being serious here. That’s not how our democracy is supposed to work. These people aren’t elected. They’re not accountable.”

Obama also jabbed Trump on the issue the current president frequently heralds as one of his greatest achievements: The strong economy. Obama reminded the audience that the economic recovery began during his administration and defended his handling of the 2008 economic collapse.

“When you hear how great the economy’s doing right now, let’s just remember when this recovery started,” he said.

He also criticized Trump’s response to the violence last year at a white nationalist rally in Charlottesville, Virginia, that resulted in the death of one person.

The speech was a preview of the argument that Obama is likely to make throughout the fall. On Saturday, the former president will stump for House Democratic candidates from California at an event in Orange County, a conservative-leaning part of California where Republicans are at risk of losing several congressional seats.

Next week, Obama plans to campaign in Ohio for Richard Cordray, the Democratic nominee for governor, and Ohio Democrats.

Obama’s campaign activity will continue through October and will include fundraising appearances, according to an Obama adviser. The adviser was not authorized to discuss Obama’s thinking publicly and spoke on condition of anonymity. While the former president will be visible throughout the general election, the adviser said that Obama will not be a daily presence on the campaign trail.

“In 2016, voters rejected President Obama’s policies and his dismissiveness towards half the country,” Republican National Committee spokesman Michael Ahrens said in response to the Friday speech. “Doubling down on that strategy won’t work in 2018 either.”

Meanwhile, Michelle Obama is also stepping up her political involvement ahead of the November midterm election. She will headline voter registration rallies in Las Vegas and Miami later in September as part of a week of action by When We All Vote, the new nonpartisan organization that she co-chairs.

Left: Obama is set to speak Friday as he accepts an ethics in government award in Illinois. Stream courtesy of the University of Illinois.

After NYT essay, Trump confronted with idea that senior officials are working against him