WASHINGTON — Move over, 2020 Democrats. President Donald Trump would like to remind voters that he, too, is on the ballot next week.

With no serious challenger and money to burn, Trump’s reelection team hopes to use voting in early states on the campaign calendar as a test run for its organizing prowess and to boost excitement for the president’s candidacy come November.

President Donald Trump is expected to speak from Des Moines, Iowa, at 8 p.m. ET. Watch the president’s remarks in the player above.

Trump’s team is pouring money into the contests, dispatching dozens of surrogates and staging presidential rallies — both to put Democrats on notice and to demonstrate that Republicans are eager to support the president.

“Even though it’s a foregone conclusion that the president will win the Republican primary, we still want them to go out and vote,” said Chris Ager, one of New Hampshire’s three representatives on the Republican National Committee. “We don’t want to cede the ground to the Democrats just because they have more enthusiasm.”

Trump’s campaign views Monday’s leadoff caucuses in Iowa and the Feb. 11 New Hampshire primary as presenting both a challenge to meet sky-high expectations and an opportunity to flex political strength.

The campaign will launch an all-out surrogate offensive in Iowa following a presidential rally Thursday in Des Moines. In New Hampshire, the campaign is conducting a monthlong test of its voter turnout operation, including 10,000 volunteer phone calls and dozens of volunteer training sessions. It will culminate in a Trump rally in Manchester on the eve of the vote.

“Even though it’s a foregone conclusion that the president will win the Republican primary, we still want them to go out and vote.”

South Carolina and Nevada canceled their nominating contests to show their allegiance to the president, but the campaign has nonetheless been in discussions about holding a Trump rally in Nevada ahead of Democratic voting.

The Trump campaign views the deployment as a supercharged version of traditional “bracketing,” bringing the president and other heavy hitters to step on Democrats’ messages at a pivotal juncture in the campaign.

It’s an “incredible opportunity” to contrast Trump’s agenda with the Democrats’ in states that they believe Trump has a chance of carrying in November, said RNC and Trump campaign spokesman Rick Gorka.

The nominating contests also represent an opportunity for the GOP to kick the tires on its voter mobilization efforts and turnout models. In New Hampshire’s Hillsborough County, for instance, party officials have been encouraging town committees to have ballot inspectors monitor polling sites “even though we know it’s going to be an overwhelmingly Democratic presence,” Ager said.

The Trump campaign is keenly aware that three of the four early states are also general-election battlegrounds. Trump won Iowa by 9 percentage points in 2016 and lost New Hampshire and Nevada by fewer than 3,000 votes and 37,000 votes, respectively.

“We’re focused on the general election in November, so it’s all about building that ground game and that momentum in November,” Gorka said. 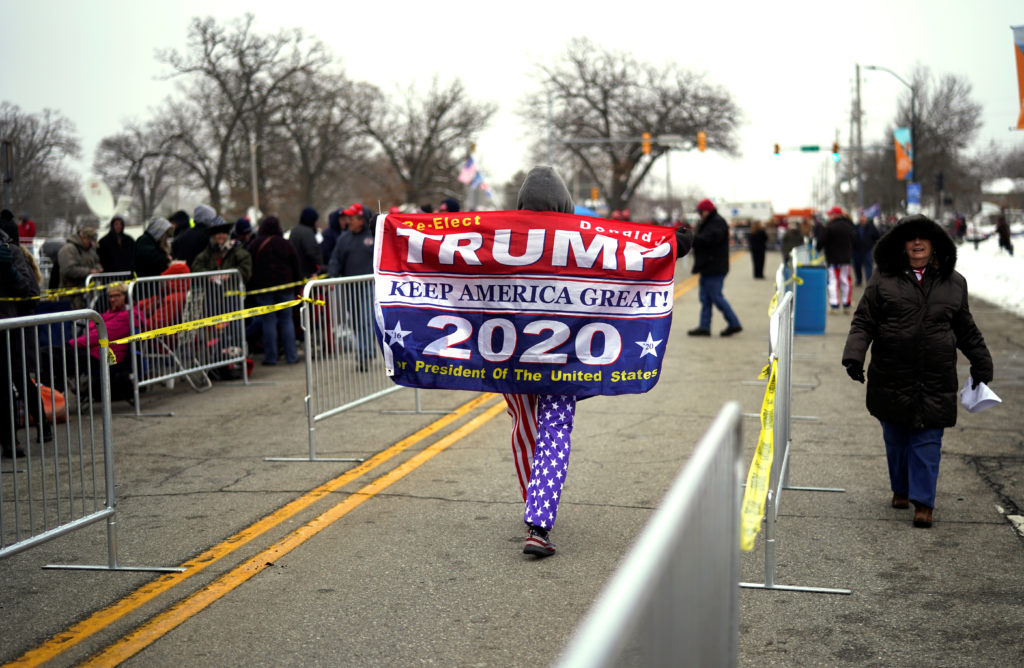 While Trump is among the least popular presidents in modern history, he has nonetheless maintained wide support among Republicans, with 83% approving of his job performance in a January poll from The AP-NORC Center.

The beginning of the primary season marks the end of a critical but low-key phase of the Trump campaign.

Since late 2018, it has had a dedicated team in place focused on working with state and local Republican Party operations to tighten Trump’s grip on state nominating and delegate selection processes. The efforts served two goals: closing the door on potential Republican challengers and attempting to banish any sense of intraparty turmoil from August’s Republican National Convention. Trump aides have expressed hope that Milwaukee will be a “four-day infomercial” for Trump.

It’s not that Trump’s team ever feared a bona fide challenger would seize the nomination. But any serious opposition would have been an embarrassment for Trump — who likes to claim a 95% approval rating among Republican voters — and could have damaged his prospects in the general election. The only time incumbents have lost in the modern era has been following bitter intraparty nomination fights.

Nonetheless, Trump’s performance in at least some states will likely be less overwhelming than he hopes, given historical precedent.
It’s unusual for Iowa — where Cabinet secretaries, top Republican officials and even the “My Pillow” guy will descend next week to help boost Trump’s prospects — to even be holding a GOP contest with an incumbent in the White House. The Iowa Republican caucuses were canceled in 1992 and 2004, but state officials were determined to keep the caucuses in place this year to maintain the state’s status as the first in the nation to cast its ballots, GOP Chairman Jeff Kaufman said.

New Hampshire, a state with a fiercely independent streak and an open primary, was a potential landmine. In 1992, Republican Pat Buchanan’s surprisingly strong 38% showing catapulted him as a serious threat to George H.W. Bush’s candidacy and was later blamed by Bush aides for contributing to his eventual defeat by Democrat Bill Clinton.

To boost Trump’s prospects in the state — both for the primary and in November — his campaign has been on the ground since he won in 2016, recruiting and training local activists. It has more than a dozen staffers and has trained nearly 800 people.

Still, the campaign has had its hiccups, including firing its state director Eric Mitchell last month. The new director, Sebastian Rougemont, worked for Trump’s campaign in Georgia and served as a GOP organizer in Las Vegas, but appears to have no New Hampshire experience.

“I see Democratic canvassers all the time, and I haven’t seen any organized Trump effort whatsoever,” said Cullen. He’ll be voting for Republican Bill Weld, the former governor of Massachusetts whose candidacy has gained little traction.

A week before Iowa caucuses, which 2020 Democrats are resonating most?