The impeachment trial has consumed Washington this week as senators weigh the fate of Donald Trump’s presidency. But for a brief moment Friday, just a stone’s throw from the Capitol, President Trump found a friendly venue where he could address supporters on a crucial issue that drives conservative voters to the polls.

Trump rallied a crowd of anti-abortion advocates in a speech at the March for Life rally on the National Mall, becoming the first president to speak at the event.

“Together we must protect, cherish and defend the dignity and the sanctity of every human life,” Trump said. “When we see the image of a baby in the womb, we glimpse the majesty of God’s creation.” He added, “When we hold a newborn in our arms, we know the endless love that each child brings to a family.”

Noticeably absent from Trump’s speech? A lengthy mention of the ongoing impeachment trial, taking place in the Senate chamber on the opposite end of the National Mall. The president alluded to it only once in passing. “They are coming after me because I am fighting for you and we are fighting for those who have no voice,” he said.

It was a remarkable juxtaposition: House Democrats arguing for the Trump’s removal from office at the same time that a defiant president gave a speech largely ignoring the biggest fight of his political life. 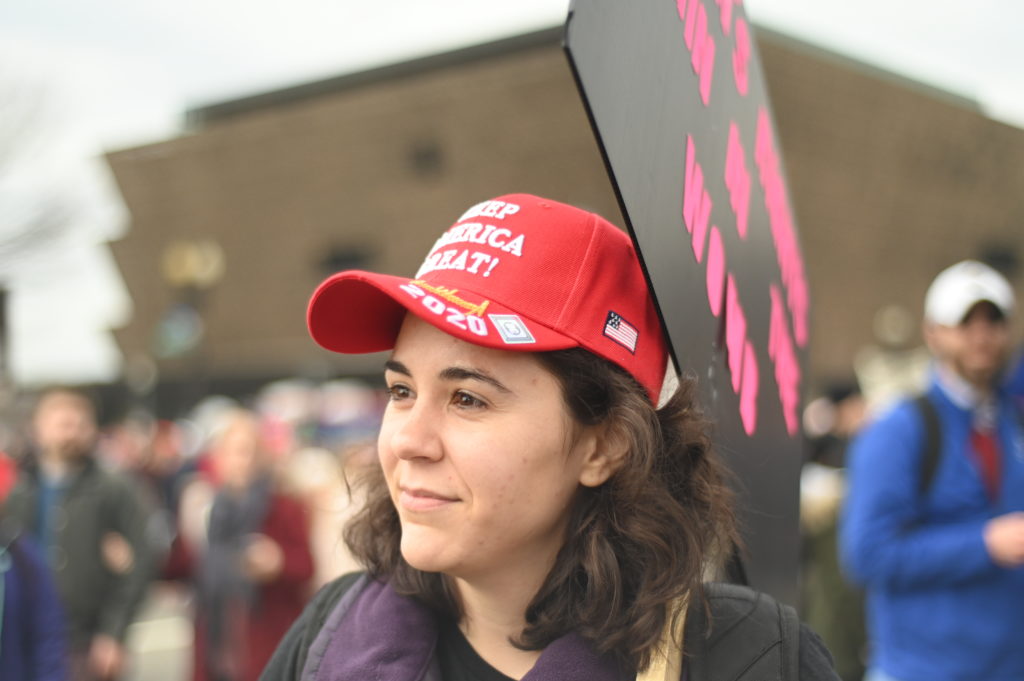 “I think this is a partisan impeachment,” said Virginia resident Rachel Kosar, 27. “In my opinion, the Democrats do not have enough evidence to push through a ruling in the Senate and they know it.” Kosar was one of thousands who attended the March for Life rally in Washington, D.C., on January 24, 2020. Photo by Jamie Leventhal/PBS NewsHour.

The moment was not lost on the many Trump supporters who attended the march. If anything, Trump’s appearance energized those who claimed the president has done nothing wrong and is the victim of a partisan Democratic attack.

“There’s a group in Washington that has been plotting to remove [Trump] from the time he was elected.”

“There’s a group in Washington that has been plotting to remove [Trump] from the time he was elected,” said Lucy Klaus, 71, a resident of Virginia who attended the march. Democrats “have been doing everything in their power to make this happen. This is the United States of America. The people decide who the president is. OK? No one else, us.”

“Just like the Mueller investigation, everything is all about bringing one thing after the other just to get Trump,” said Macdonald Uboh, a 36-year old immigrant from Ghana, referring to the special counsel investigation into Russian interference in the 2016 election. “You can say it’s all a scheme with one goal: Take out Donald Trump.”

Thousands descended on Washington, D.C., from across the country to march against abortion. The annual rally draws massive crowds, but Trump’s decision to break from precedent and attend the event injected extra energy into this year’s march.

Historically, anti-abortion presidents including Ronald Reagan and George W. Bush have avoided the March for Life gatherings, perhaps out of concern over inciting political pushback from pro-choice advocates. This year, Trump chose to jump into the fray.

“It’s amazing” that Trump attended, said Julia Vandergrift, 22, who traveled from Michigan to attend the march. “I think it speaks volumes about who [Trump] is as a person.” 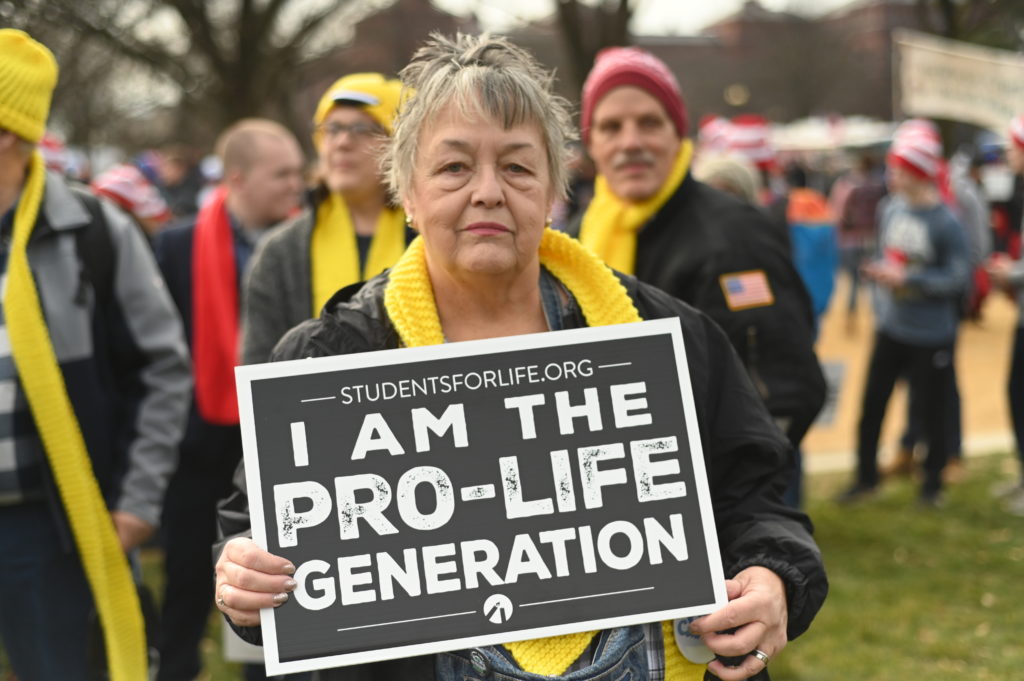 Virginia resident Lucy Klaus, 71, holds a sign during the March for Life rally in Washington, D.C., on Jan. 24, 2020. Photo by Jamie Leventhal/PBS NewsHour.

The march comes during a critical moment in the abortion debate, as the U.S. Supreme Court prepares to hear arguments over a 2014 Louisiana law that requires abortion providers to have admitting privileges at a nearby hospital—a move that dramatically limits access to clinics for women across the state.

Since Trump took office, his administration has moved to eliminate Title X funding for abortion providers. He has also won over many Christian voters with promises to appoint conservative Supreme Court justices who could be willing to vote to overturn the landmark Roe v. Wade decision that legalized abortion. On Friday, the Trump administration also issued a notice threatening to withhold federal funding from California over a state requirement that private insurers cover abortion services.

But looming over the anti-abortion march was the process taking place in the Senate that many marchers were quick to dismiss: just the third presidential impeachment trial in United States history.

Inside the Senate chamber an entirely different reality played out Friday as the House managers spent the day making their final oral arguments for why Trump should be removed from office for abuse of power and obstruction of Congress. 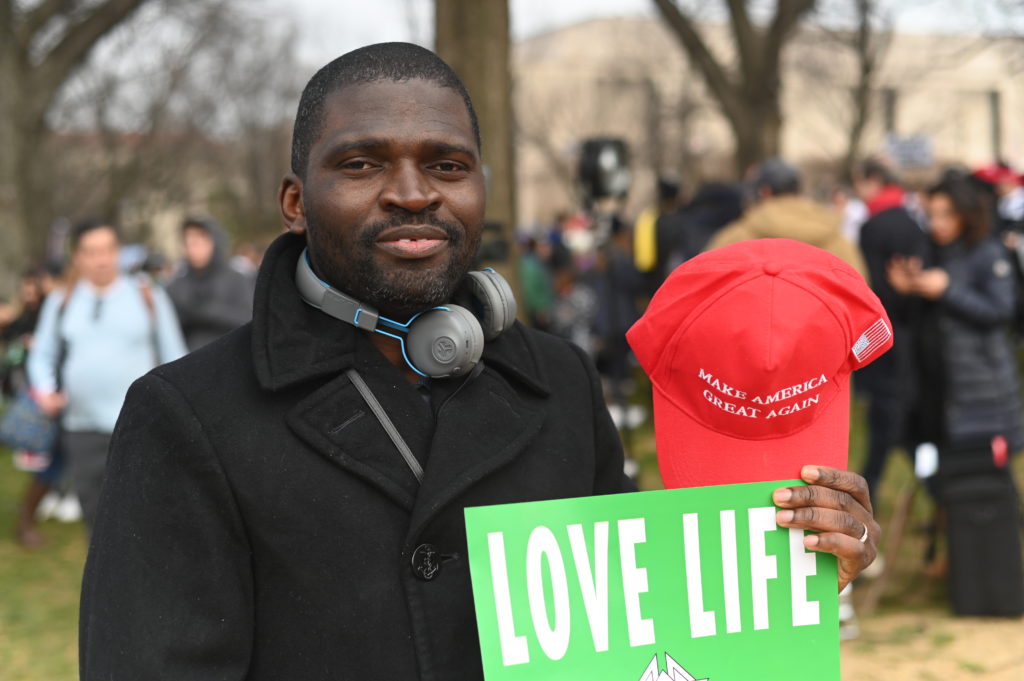 Under the trial rules, senators cannot speak while the prosecution and White House legal team make their case. As a result, the lawmakers sat silently at their desks, scribbling notes, while House Intelligence Chairman Adam Schiff, D-Calif., and the rest of the prosecution team took turns describing in detail how Trump pressured a foreign power to interfere in the 2020 U.S. presidential election.

House Democrats argued the evidence proved conclusively that Trump withheld military aid and an Oval Office visit from Ukraine in order to try and pressure the country to announce an investigation into Joe Biden, the former vice president and 2020 Democratic presidential candidate, and his son Hunter Biden.

Schiff accused Trump of cheating to try and gain an advantage in the election. “Was it worth it?” Schiff asked at one point. “Because it certainly wasn’t worth it for the United States.” Another House manager, Rep. Hakeem Jeffries, D-N.Y., said Democrats “provided overwhelming evidence of the president’s guilt.”

“President Trump tried to cheat, he got caught, and then he worked hard to cover it up. He must be held accountable,” Jeffries said.

The Republican senators sat somber faced and unmoved. So far, they have presented a united defense of the president, arguing that his conduct does not rise to the level of impeachable offenses.

It’s a sentiment that reverberated outside the Capitol at the march. Some Trump supporters said they believed his contributions to the country outweighed his personal flaws. Many cited the strong economy, and Trump’s anti-abortion stance.

“I don’t believe that there is a case against” Trump, said Michael Panicali, 44, a Catholic priest from New York. “I think that [Democrats] just hate him and want to undo his presidency.”

Above: Activists gather for the March For Life in Washington, DC on Jan. 24, 2020. Photo by Jamie Leventhal