What motivated voters on Election Day?

Voter support for a Republican surge during the 2022 midterm elections turned out to be more subdued than predicted, according to early results and voting data from the Associated Press.

Amid Americans’ concerns over historic inflation and low job approval numbers for President Joe Biden, “Republicans should have run away with this election,” said Republican strategist Whit Ayres. “It should not have been this close.”

It may take weeks to know the final makeup of the next Congress, as ballots are still being counted and one Senate race going to a runoff in early December. But Republican wins have been narrower than some predicted, particularly in the House.

In addition to the economy, voters flagged that abortion and questions about democracy (including false claims that the 2020 election was stolen) were top of mind. Data from the Associated Press’ VoteCast survey, which included interviews from more than 115,000 people between Oct. 31 and Nov. 8, offers insights on who showed up at the polls in key battleground states and why.

In the first major election cycle since the Supreme Court overturned Roe v. Wade, abortion fueled many people’s votes during the midterms. That was true in Pennsylvania, where a quarter of voters said abortion was the single-most important issue to them when considering their ballot choice, including 78 percent of voters surveyed who supported Democratic Senate candidate – and now winner – John Fetterman.

Ahead of the election, national polling suggested that inflation was the top concern for a plurality of voters, which raised some doubts about how much of a motivating factor abortion would end up being.

Fetterman, the state’s Democratic, hoodie-wearing lieutenant governor, was up against Republican health and wellness celebrity, Dr. Mehmet Oz, who, during their October debate, said that the federal government should not determine access to abortion. Instead, he argued, such decisions belong to “women, doctors, local political leaders.” Those comments were widely interpreted to mean that Oz wanted politicians to play a role in dictating people’s access to abortion. 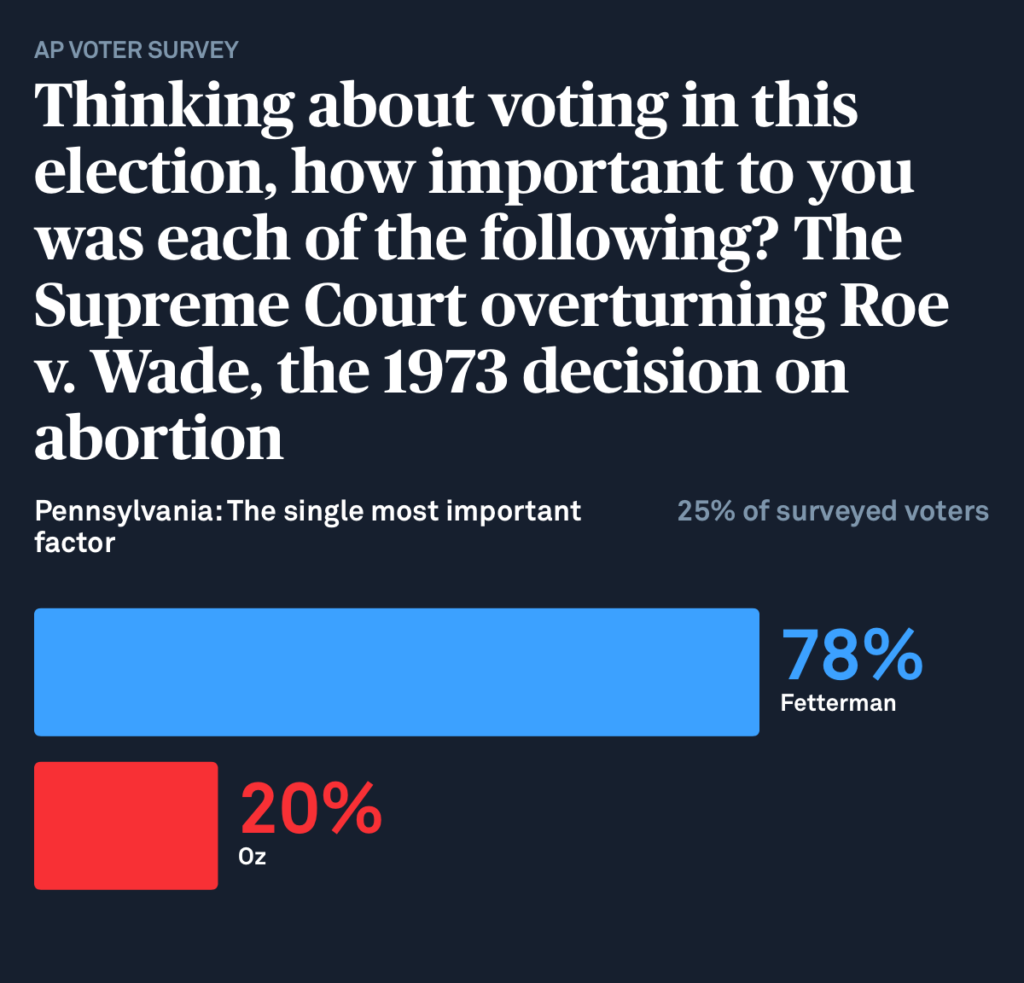 In the race for the governor’s seat, Pennsylvania Attorney General Josh Shapiro, a Democrat, won 55 percent of the state’s vote against Douglas Mastriano, a far-right Republican candidate who staunchly opposed access to abortion services. If elected, he vowed to sign so-called “heartbeat bills” that would have made it illegal to perform abortion six weeks after conception. Roughly half of Pennsylvania voters – 48 percent – said the Supreme Court’s decision to revoke federal protections on abortion played a major role in influencing who they chose to support in this race. That included 78 percent of voters who ultimately voted for Shapiro.

But Democrats also have some lessons they should take away from these elections, particularly on abortion, said Democratic strategist Tracy Sefl. Talking about the issue of abortion makes many people feel uncomfortable, Sefl said, but “voters understand what it means when we say we’re taking away your right to decide what you do with your body.”

Moving forward, Sefl said, Democrats “need to reconcile” how they engage with voters about abortion.

Concerns about the economy likely played a role in who Ohioans wanted to be their next U.S. senator.

Republican J.D. Vance, the “Hillbilly Elegy” author and Trump ally, beat his Democratic opponent, Rep. Tim Ryan on Tuesday. About half of Ohio voters surveyed through AP VoteCast said the economy was the most important issue facing the country. That included 65 percent of people who backed Vance.

On the campaign trail, Vance claimed his opponent shared responsibility with Biden in creating a dreary economy. Although that message appears to have stuck with voters, Ohioans largely aren’t caught in an economic bind, according to AP VoteCast data. Two-thirds of Ohio voters said they could find a good job if they needed to, and were split in their support for the two Senate candidates. About half of Ohio voters felt confident they would receive Social Security benefits in the future. 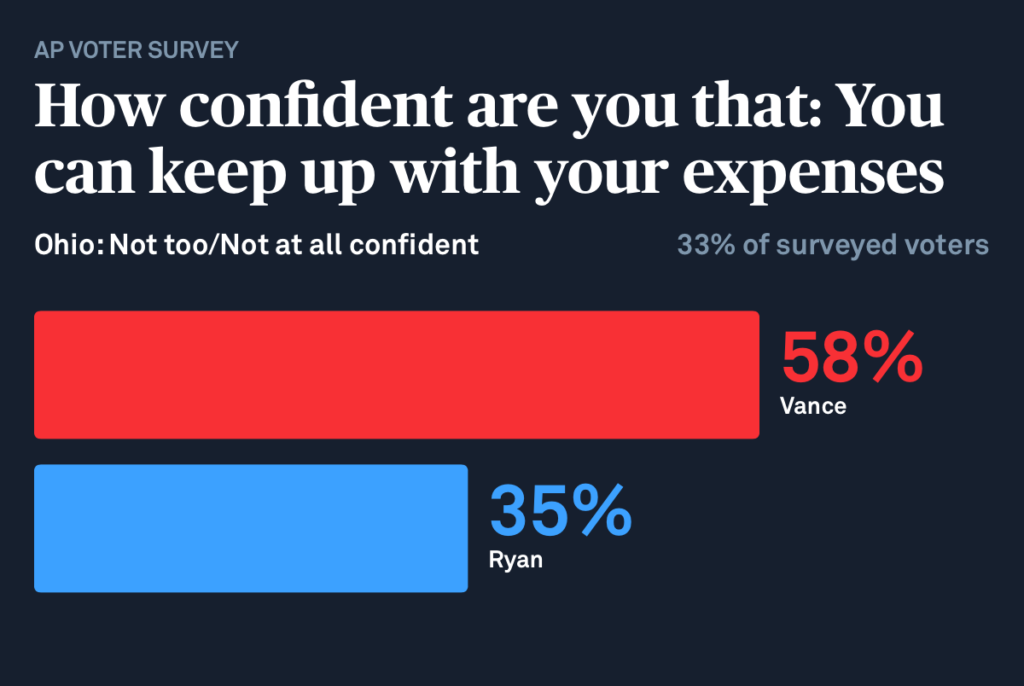 Among the Ohio voters who said they had little to no confidence in their ability to keep up with their expenses (about a third), 58 percent said they supported Vance. Meanwhile, 35 percent supported Ryan.

Arizona has not been called yet for either Republican Kari Lake or Democrat Katie Hobbs, the current secretary of state. While Hobbs had defended how Arizona conducted and counted votes during the 2020 elections, Lake pushed disinformation and closely aligned herself with President Donald Trump and his false claims of election fraud.

According to AP VoteCast survey data, six out of 10 Arizona voters who were surveyed said Biden was legitimately elected. That included 65 percent of people who voted for Hobbs. Meanwhile, four out of 10 Arizona voters said they did not think Biden was legitimately elected, and nearly all of those surveyed – 91 percent – supported Lake. 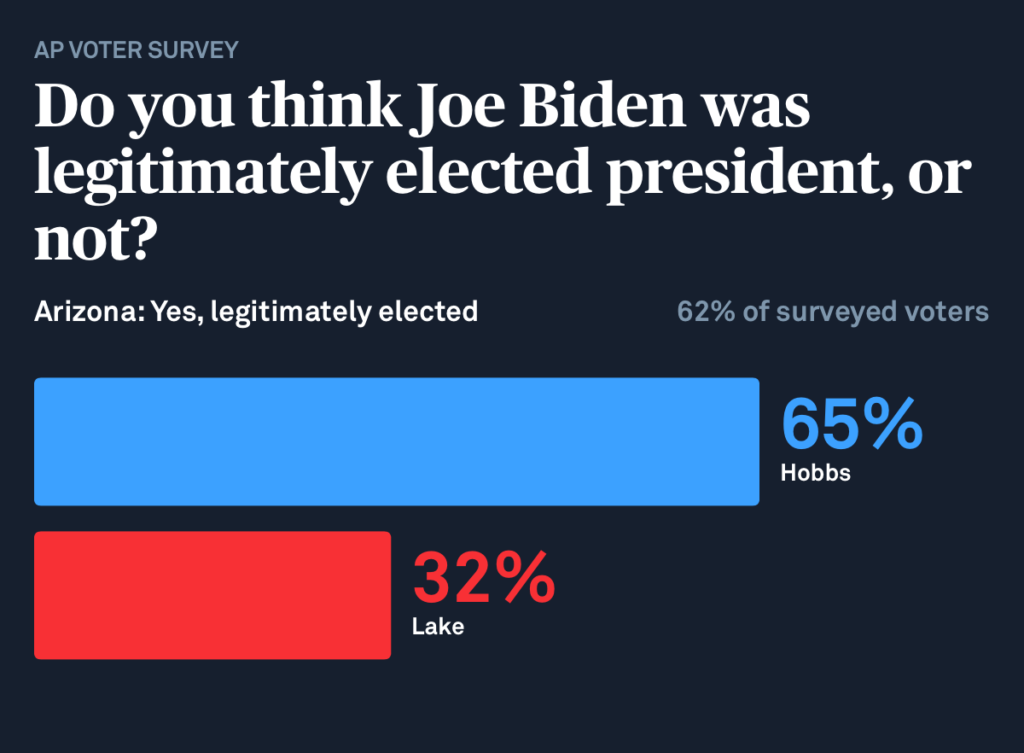 People who voted for Hobbs were also significantly more likely to say that the future of democracy was the single most important factor when it came to casting their ballot than those who voted for Lake (63 percent compared to 36). 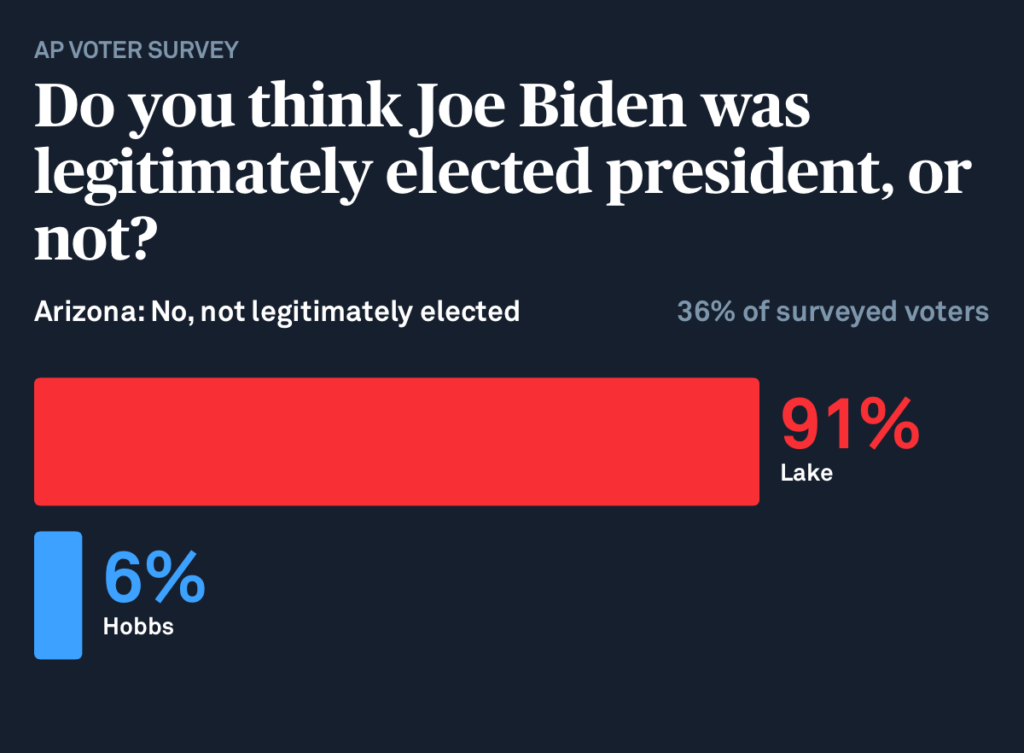 The heightened (and often false) rhetoric around election security was a major theme in the race, and soon we may know just how much it affected the ultimate outcome.