What was George H.W. Bush’s record on race?

George H.W. Bush got elected president after a campaign marked by the infamous Willie Horton ad, about a black murderer who raped a white woman while on a weekend furlough from prison.

On the other side of the racial ledger, Bush appointed Gen. Colin Powell as the first black chairman of the Joint Chiefs of Staff.

And while Bush replaced civil rights hero Thurgood Marshall with another black man to maintain the racial status quo on the Supreme Court, he picked Clarence Thomas, a conservative whose views are at odds with those of much of black America.

Lionized upon his death as a man of decency and civility, Bush has a mixed and complicated legacy when it comes to race.

“Intellectually and emotionally, he was somebody who was civil rights-minded,” said Rice University historian Douglas Brinkley. “Bush wanted to see himself as being a man devoid of racism. But the reality is that Bush often had to do dog whistles and appeal to less enlightened Americans on race.”

The Rev. Jesse Jackson summed up the 41st president’s record this way: “He was a fundamentally fair man. He didn’t block any door. He was never a demagogue on the question of race.”

Bush, who died Friday at 94, had a political career that spanned decades and straddled the Jim Crow era, the civil rights movement and its aftermath.

To many black Americans, the Willie Horton ad is an indelible stain on his reputation.

The TV spot about the Massachusetts inmate was produced by Bush supporters during his 1988 presidential campaign against Massachusetts Gov. Michael Dukakis. It was widely condemned as racist and is regarded three decades later as one of the most extreme attack ads in modern political history.

The Bush campaign disavowed the ad at the time, but Bush’s chief strategist, Lee Atwater, exploited its message to paint Dukakis as soft on crime.

In an interview Monday, Jackson said that he and Bush discussed the ad and that it was the president’s biggest regret.

“It was out of character for him,” the civil rights leader said of Bush and the Willie Horton strategy. “He did it in the heat of battle.”

“Bush helped pave the way for the modern Republican Party, we see now.”

Bush got his start in politics in Texas, where he joined a Republican Party still regarded as “the party of Lincoln.” During his first, losing bid for Congress in 1964, he criticized his opponent’s support for the Civil Rights Act, legislation many in his home state opposed.

He won election to Congress two years later and went on to support the Fair Housing Act of 1968, signed into law by President Lyndon Johnson a week after the Rev. Martin Luther King Jr.’s assassination.

Bush considered the housing law “the right thing to do,” according to Jackson, who called him “a man of immense dignity who has a very special place in American history.”

Bush caused a minor flap during the 1988 Republican National Convention, when he referred to three of his grandchildren as the “little brown ones.” The three were children of Bush’s son Jeb and his Mexico-born wife, Columba.

Defending himself at a news conference, Bush called his grandchildren his “pride and joy” and added: “For anyone to suggest that that comment of pride is anything other than what it was — I find it personally offensive.”

Columba and the grandchildren later ended up in a Spanish-language campaign commercial where Bush promised to help Hispanics because he would have to answer to his family and “answer to history.”

Once in office, Bush elevated African-Americans to the heights of public office. He nominated Powell to the top post in the U.S. military. Powell went on to become the first black secretary of state, under Bush’s son George W. Bush.

The elder Bush also appointed Dr. Louis Sullivan, founding president of the Morehouse School of Medicine in Atlanta, as secretary of health and human services.

“He is someone who I would characterize as fiscally conservative and socially liberal,” Sullivan said in an interview Monday. “He believed that people should earn their way, but he felt that everyone should have the equal opportunity for development and appointment to positions. He was very much committed to that, as was his wife, Barbara.”

In 1991, Bush nominated Thomas to replace the retiring Marshall, the first African-American on the Supreme Court. Thomas was the ideological opposite of Marshall, a civil rights legend who argued the Brown v. Board of Education case that struck down school segregation. 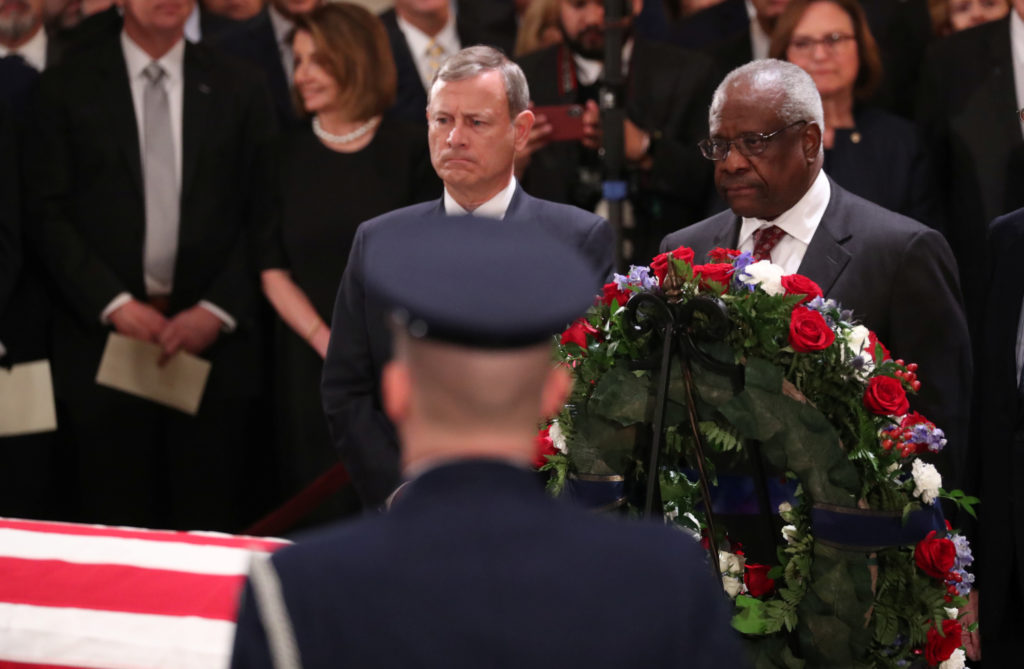 Supreme Court Chief Justice John Roberts and Associate Justice Clarence Thomas, who was nominated to the Supreme Court by former President George H.W. Bush, stand before the late president’s casket together inside the U.S. Capitol Rotunda on Capitol Hill in Washington, D.C. Photo by Jonathan Ernst/Reuters

Thomas’ controversial nomination was made even more so when former employee Anita Hill accused him in lurid detail of sexual harassment. Thomas denied the allegations and won confirmation.

Currently the longest-serving member of the high court, Thomas has ruled against affirmative action and voted to end key protections in the Voting Rights Act.

Also in 1991, Bush denounced former Ku Klux Klan grand wizard David Duke as a racist and a “charlatan” days before Duke lost his bid for governor of Louisiana. Afterward, Bush said: “I did what I did because of principle. This man, his record, is one of racism and bigotry, and I’m sorry, I just felt I had to speak out.”

The 1992 Rodney King verdict and Los Angeles riots also tested Bush on race in his final year as president. In a primetime address in the wake of the burning and looting that resulted in dozens of deaths, injuries and arrests, Bush called for law and order while seeming to empathize with those who were angered by the acquittal of the officers charged in the videotaped beating of the black motorist.

“As your president, I guarantee you this violence will end,” Bush said. “This is not about civil rights or the great cause of quality that all Americans must hold. It is not a message of protest. It’s been the brutality of a mob, pure and simple. But beyond urgent need to restore order is the question of justice.”

Bush described the King beating as “revolting” and said he spoke to civil rights leaders who felt betrayed by the jury’s decision.

“I felt anger. I felt pain. I thought, ‘How can I explain this to my grandchildren?'” he told viewers.

“Bush helped pave the way for the modern Republican Party, we see now,” she said. “He gives us Clarence Thomas, but he also gives us Colin Powell. That’s his signature, that he plays both sides of the game.”

Associated Press writer Russell Contreras contributed to this report from Albuquerque, N.M. Whack is The Associated Press’ national writer on race and ethnicity.

Left: President George H.W. Bush poses for photographers after his address to the nation, September 1991, in the Oval Office of the White House. Photo by Luke Frazza/AFP/Getty Images