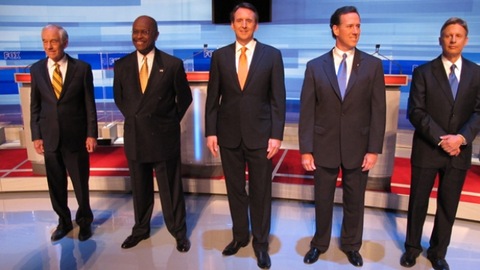 The lack of attendance by Mitt Romney, Newt Gingrich and other top-tier presidential hopefuls at Thursday night’s GOP debate was notable enough to get its own round of questioning.

The Fox News debate moderators tried to get those on the stage in Greenville, S.C., to take shots at their missing potential opponents, but most refused to do so.

“Anybody who would suggest we call a truce on moral issues doesn’t understand what America’s all about,” Santorum said.

Former Minnesota Gov. Tim Pawlenty sought to weave his biography into many of his answers as he continues to try to introduce himself to voters. As the person on the stage with, perhaps, the best shot at the nomination, he clearly had the most to lose Thursday night. Having avoided any clear mistakes or embarrassing moments, Pawlenty delivered a solid performance and no doubt did himself more good than harm by showing up.

With two libertarians on the stage in Texas Rep. Ron Paul and former New Mexico Gov. Gary Johnson, the legalization of drugs probably got a bit more attention as an issue compared to where it ranks on voters’ priority list.

But Rep. Paul and Johnson also tapped into a growing uneasiness about the American mission in Afghanistan. This will be a dynamic to watch throughout the cycle among the Republican candidates.

Will the traditionally hawkish Republican candidates remain committed to an open-ended war in Afghanistan as it becomes increasingly unpopular with the American electorate?

The New York Time’s Jeff Zeleny noted the ghost of Romney on the stage.

President Obama’s successful operation to kill Osama bin Laden came in for much praise from the candidates, but it didn’t stop them from criticizing the president’s overall approach to foreign policy matters.

“He did a good job and I tip my cap to him in that moment,” Pawlenty said in his moment of praise for the president.

When the Republican hopefuls take to the debate stage in New Hampshire next month, it could end up being twice as crowded.

ON THE ROAD AGAIN

President Obama will have the opportunity Friday to meet privately with members of the Navy SEAL team involved in the operation to kill bin Laden.

Vice President Joe Biden will join the president for the event at Fort Campbell, Ky.

In addition to greeting SEAL Team 6, the president will deliver remarks at 3:55 p.m. EDT to service members just back from deployment. It’s the final leg of the administration’s week-long victory tour marking Sunday’s killing of the al-Qaida leader responsible for the 9/11 attacks.

On Thursday, the president met with New York first responders and families of those killed on 9/11. He also laid a wreath at Ground Zero, his first visit to the site since taking office.

The White House noted that Fort Campbell is home to several units, including the 101st Airborne Division, which has several teams that have recently returned from Afghanistan.

Kentucky Gov. Steve Beshear, a Democrat running for re-election this year, will not accompany the president on his visit, citing scheduling reasons. Mr. Obama has low approval ratings in the Bluegrass State, so it appears that not even the glow from bin Laden’s death was enough to convince Beshear to change his plans.

The trip had originally been scheduled for early April but was postponed as the president and congressional leaders negotiated a budget deal to avert a government shutdown.

Given the setting, you can expect the president to address the rising cost of gas prices as well as the country’s economic outlook.

The Labor Department reported Friday that the economy added 244,000 new jobs in April, more than economists had expected, while the unemployment rate ticked up two-tenths of a point to 9 percent as more Americans resumed their search for work.

There will also be a little 2012 imagery thrown into the mix Friday as Indiana Gov. Mitch Daniels, who is considering a run for the GOP nomination, will be at the airport in Indianapolis to welcome Mr. Obama to the Hoosier State. The safe bet is on a solid handshake between the two, instead of a Charlie Crist-style man-hug.

The first meeting between the vice president and a bipartisan group of House and Senate leaders regarding the country’s long-term budget ended Thursday with Mr. Biden describing the talks as “productive” and a pledge for the parties to come back for a second round next Tuesday.

Before any real progress can be made, however, Republican leaders and rank-and-file members might need to sort out the differences they have with each other.

The Washington Post’s Philip Rucker and Lori Montgomery report House Majority Leader Eric Cantor, R-Va., House Ways and Means Committee Chairman Dave Camp, R-Mich., and House Budget Committee Chairman Paul Ryan, R-Wis., all seemed to acknowledge that Medicare reform was not likely to be part of an agreement with Democrats, with Camp conceding that repealing the president’s health care overhaul was not a possibility either.

“Such statements sparked a backlash among conservative Republicans, who said House leaders were ceding too much ground too early in what are expected to be lengthy budget negotiations with Democrats,” write Rucker and Montgomery.

The dynamics here are similar to the most recent debate over the 2011 budget, with conservative House lawmakers demanding serious spending cuts, including sweeping entitlement reforms, and Democrats balking at such proposals, setting up another tug-of-war with Republican leaders once again caught in the middle.