For these young Republicans, student debt and jobs are top priority

During a polarizing election cycle in which a quarter of Americans dislike both major party candidates, nearly 16 million youth are eligible to vote for president for the first time.

In the 2012 race, individuals below age 45 played a pivotal role in key battleground states such as Ohio. While voters age 45 and above swung to Mitt Romney, Barack Obama gained the support of millennials to win the state’s 18 electoral votes.

“As somebody who is going to be graduating college in the next couple of years, I want to elect somebody who has the means and the experience to create jobs for my generation.” — James Oaks, college student

With voter turnout for 18 to 24-year-olds in presidential elections registering below 50 percent for almost half a century, candidates with strategies to mobilize youth voters hold an advantage.

And Ohio, home of last week’s Republican National Convention, is a key state. In the past 13 presidential elections, the candidate who earned Ohio’s electoral vote won the presidency.

But some college Republicans, both in Ohio and elsewhere, said they feel that neither of the presidential candidates fully represents their interests.

“I don’t necessarily support Trump’s platform,” said New York University student Lauren Page, 21, who said she backs the Republican Party because of its position on economic issues. “I support my party.”

In 10 interviews conducted by the NewsHour with self-described Republicans ages 18 to 25, seven of whom attend college or vote in Ohio, these voters said they gravitated toward the Republican party because of economic, rather than social, concerns. 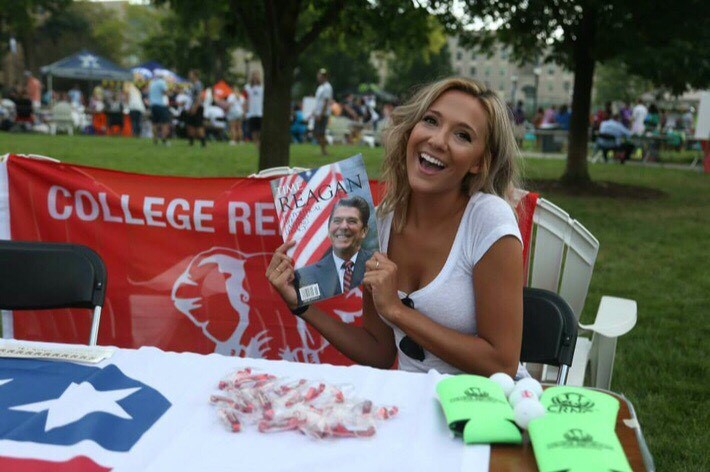 “One thing is that we know that demographically and economically, this generation, those who are in college and who just graduated from college are experiencing a harder time than generations just before them with things like finding jobs,” Patrick Egan, director of Undergraduate Studies at NYU, said. “We see that in the data — the economic data, the Census data — and so it wouldn’t surprise me if those realities were affecting attitudes and what they’re thinking about when they’re going to the polling booth.”

Despite declines in the unemployment rate across the U.S. since October 2009, students voiced persistent concerns about the job market and speed of economic recovery, and said they hope to elect someone who is capable of quickly boosting growth.

“As somebody who is going to be graduating college in the next couple of years, I want to elect somebody who has the means and the experience to create jobs for my generation,” said James Oaks, 20, a member of the College Republicans at Miami University of Ohio.

Debt was another topic of concern. With student debt increasing yearly, the average U.S. college graduate in 2016 who took out loans owed over $37,000, and the students interviewed talked about the necessity of quickly finding a job to help them pay back borrowed money.

“I think debt is a bubble that is unsustainable,” said John DiGiacobbe, 20, a vice chair of College Republicans at Miami University, said. “We have a lot of students who frankly are not paying off their debt, and the government is continuing to fund it.”

Amid these concerns, 18-year-old Madison Weaver said Trump’s economic history was in line with Republican values, and she would likely vote for him. “I’m very pro-capitalism, and I love the way capitalist society works, and I love the free market,” said Weaver, who works for Ohio Sen. Rob Portman’s campaign. “And that’s what America was meant to be. We were meant to be the country where we could turn money into more money.” 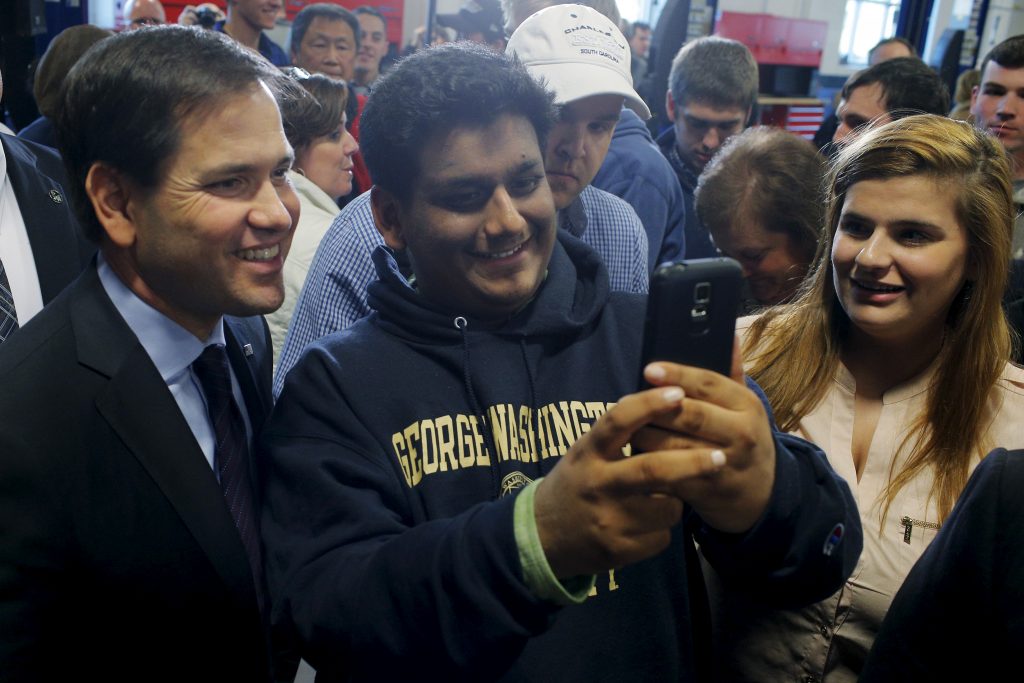 ‘I try to stay away from social issues’

Sarah Spence, 35, the chair of Ohio Young Republicans and assistant secretary of the Young Republican National Federation, has followed politics closely since she campaigned door-to-door with her mother as a child. She said she saw an emphasis among young voters on economic issues, particularly since the financial crisis began.

“Social issues aren’t taken into as much consideration as they once were,” Spence said.

Kei Kawashima-Ginsberg, director of The Center for Information and Research on Civic Learning and Engagement at Tufts University, said younger conservatives were generally less concerned about social issues.“Our entire generation — my age group — is all about to graduate college and start looking for jobs, and no one seems to think about how an election could impact their ability to do so. — Jane Klaus, college student

Jane Klaus, 18, a member of College Republicans at Ohio State University, holds views that jive with the trends described by Kawashima-Ginsberg.

“I try to stay away from social issues: abortion and gun control — all that kind of stuff — just because I think we beat those to the ground,” she said.

Klaus, along with other members of the OSU College Republicans, attended the convention in Cleveland, waiting to see the platform presented by the party.

A registered Republican, Klaus said she feels her ideals align most closely with the positions of Gary Johnson, the Libertarian presidential candidate who emphasizes smaller government and less taxation to stimulate job growth.

“Our entire generation — my age group — is all about to graduate college and start looking for jobs, and no one seems to think about how an election could impact their ability to do so. The economy is primarily what is going to impact us in the next four years,” she said. 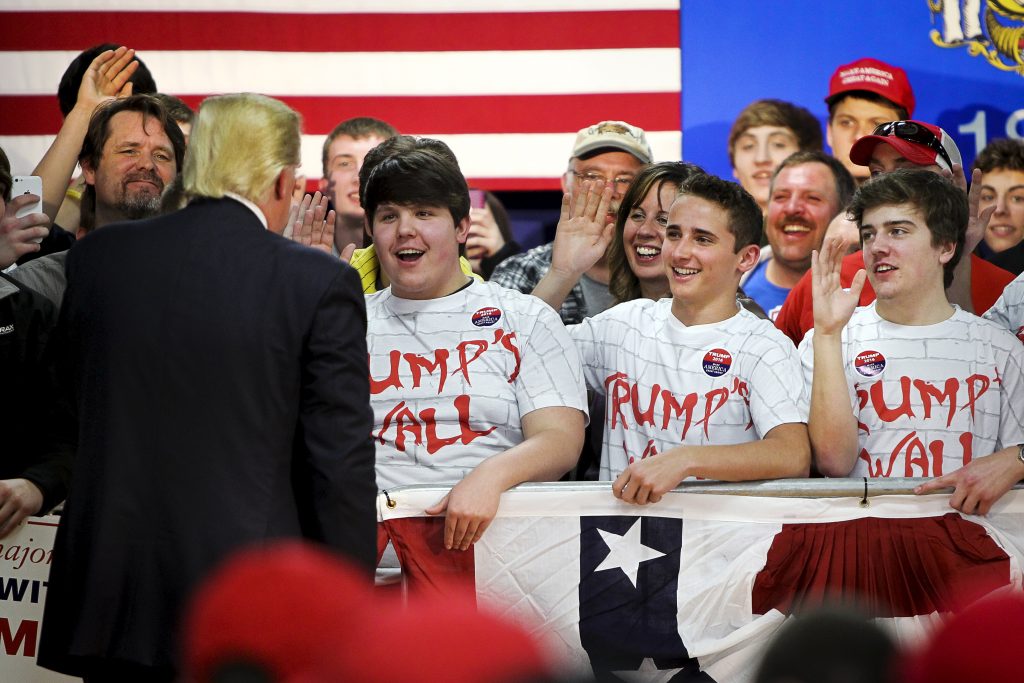 Young Republicans also expressed concern about topics including criminal justice reform, the appointment of U.S. Supreme Court justices and what they described as the potential for government overreach, particularly in regard to intelligence gathering.

Many of the students also advocated for more funding to combat the militant group that calls itself the Islamic State.

“Terrorism is something that definitely we need to keep paying attention to, especially with everything happening with ISIS in Europe,” Kyle Lamb, 20, the co-chair of College Republicans at Bowling Green University said.

Overall, some of the students worried about the impact of the rhetoric employed by the GOP candidate, speculating about what it could mean for the future of the Republican Party.

Jonathan Freeland, 25, a registered Republican who plans to vote for Johnson, said he felt Trump does not reflect the ideals of the party or the focus of young conservatives.

“I just don’t think that in the interest of the party, that supporting him would really do anything other than drive the party into the ground even further,” he said.