Super Tuesday is here. These states could determine who wins the nomination

The basics are simple: Fourteen states plus American Samoa will vote on Super Tuesday, with some 1,338 Democratic convention delegates up for grabs. But the impact is consequential.

This year’s Super Tuesday haul is more than a third of all convention delegates, which means results tonight could determine whether any of the remaining candidates can glide to the Democratic nomination — or if a rocky convention awaits.

Here’s our guide to this extra-Super Tuesday. 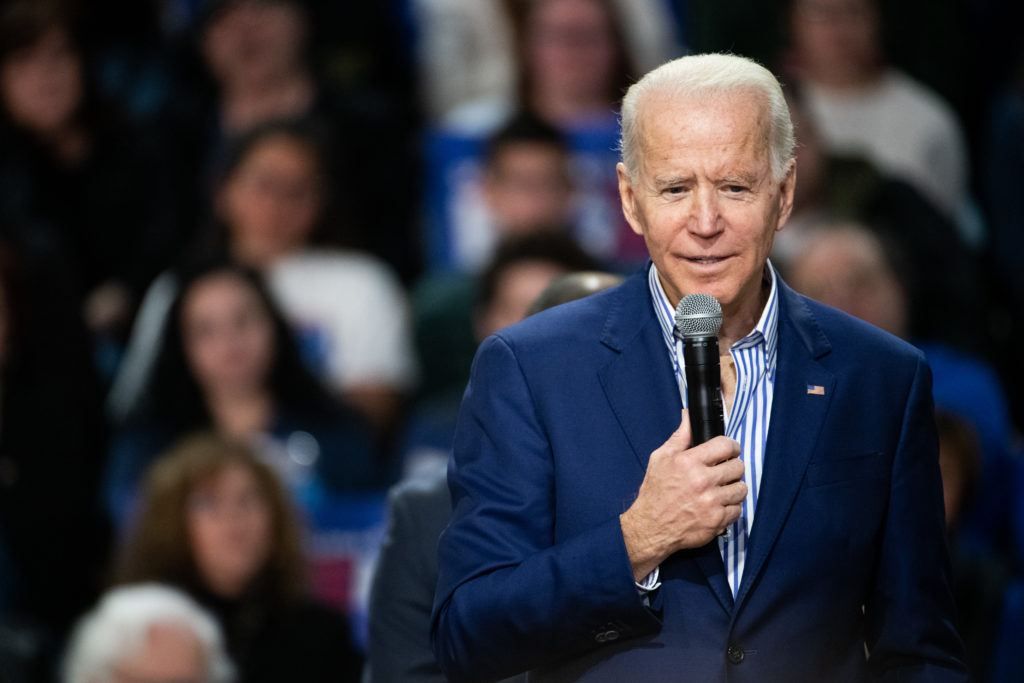 Biden. The former vice president has risen from an abysmal February, when he finished fourth and fifth in key early voting contests to enjoying perhaps the best three days of any 2020 candidate yet. He won South Carolina by a 28-point margin on Saturday and is fresh off a hat trick yesterday, receiving endorsements from three former rivals: former Mayor Pete Buttigieg, Sen. Amy Klobuchar and former Rep. Beto O’Rourke. Biden has momentum. He needs it.

Watch the results roll in with two key Biden questions in mind:

Bloomberg. No one has spent more money in a shorter period of time trying to win a presidential nomination. But former New York City Mayor Michael Bloomberg has never actually been on a presidential ballot — until today. Bloomberg needs to prove he has a strong base of support. Keep a close watch on states where polls have been warm, or at times even giving him a lead: Virginia, Oklahoma, Tennessee, Arkansas. And where does he end up in the mega-primaries of California and Texas?

Bloomberg ran on the premise that Biden is a weak candidate. But with so many rivals giving a bear hug to Biden yesterday, Bloomberg needs to prove there is a clear reason he is in the race on his own merit.

Sanders. As the candidate with the most wins (New Hampshire, Nevada and the popular vote in Iowa), Sen. Bernie Sanders is both the front-runner and also the target of the moderate Democratic establishment. Today he has a chance at big victories in the two biggest states: California and Texas. Watch the margins in those two states. They’ll help us see if the attention on Biden has cut into how large groups of Democrats see Sanders, and whether they are reconsidering him as the nominee — or if Biden’s bounce was more of a blip and Sanders will continue racking up delegates by the dozen. These two states more than any other may tell us if Sanders can win a majority of delegates without any other candidates dropping out. 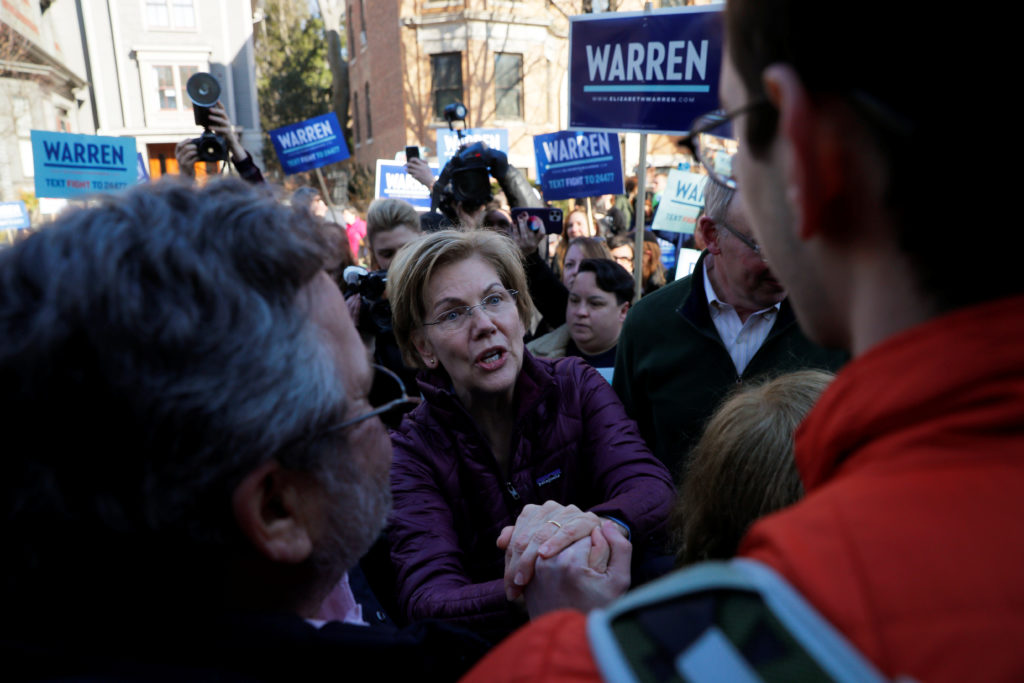 Democratic 2020 U.S. presidential candidate and Sen. Elizabeth Warren, D-Mass., greets supporters outside her house as she walks to her polling place to vote on Super Tuesday in Cambridge, Massachusetts, on March 3, 2020. Photo by REUTERS/Brian Snyder

Warren. Her task is simple. She has to win or place very high in her home state of Massachusetts and outperform in California (think second place). Any other surprise swells of support would help. Warren argues that Sanders is too liberal and Biden too stale to win the nomination. For all the interest she has generated, she repeatedly falls short in votes. Today may be her final chance to shore up significant support in state contests, even if she chooses to stay in the race until the convention.

Keep an eye on these states 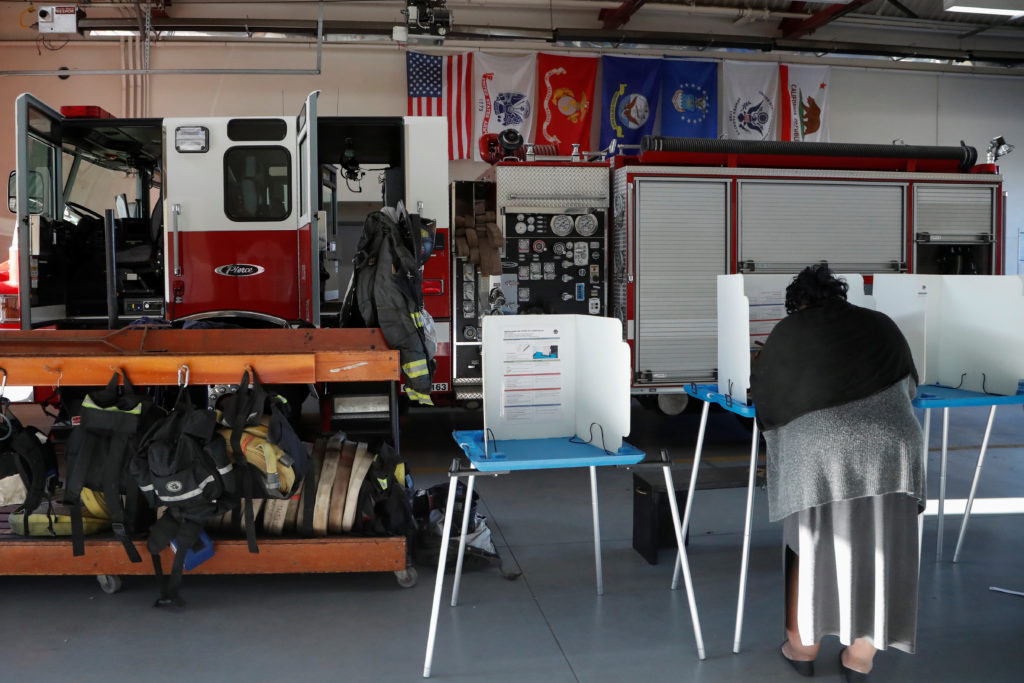 A voter casts her ballot inside a fire station as 14 states, including California, hold presidential primaries on Super Tuesday in Oakland, California, on March 3, 2020. Photo by REUTERS/Shannon Stapleton

This is the fun part. We have a real diversity of states voting today, on both coasts and — as Klobuchar might say — in the middle. Here are some of the best for each time of night.

Virginia (7 p.m. ET)
On Super Tuesday, there may be no other state in which more candidates have felt they have a real shot at a big night. Everyone is a contender in this state and it will be a good test of how a purple swing state (leaning blue) sees these candidates. The commonwealth has rural, urban, conservative, progressive, black, white, military and non-military voters, and southerners and transplant Yankees alike. If Bloomberg is behind in Virginia early, it will be a particularly bad sign for him. Keep it at the top of your watch list all night.

Alabama, Massachusetts, Oklahoma (7:30 p.m. ET and 8 p.m. ET)
These three states represent key targets for three of the candidates. Biden is hoping for a 20- to 30-point win in Alabama, where 54 percent of Democratic voters are black. Warren needs a win in her home state of Massachusetts and Bloomberg invested heavily in Oklahoma. But Sanders could do well in all three.

Also let us sneak in a word for watching Maine, where Rep. Tulsi Gabbard has spent significant time. She has fallen far in the polls, but if there is any place where she may rise again, it is the Pine Tree state.

Texas and Colorado (9 p.m. ET)
The Lone Star state has 228 delegates. (By comparison, New Hampshire has 24). And it is a place Democrats hope to push into the light blue category. One more thing: This is a spot where any Biden momentum could show. If he can get close to Sanders in this state, it would be significant. In Colorado, Democrats will get results from an important population of suburban and small-town voters. This group has been split throughout this primary, and may make different choices now that some of their favorite candidates (like Klobuchar and Buttigieg) are out of the race.

California (11 p.m. ET)
The Golden State is a juggernaut, with 415 delegates. It is an electric blue place, where 30 percent of Democrats are Hispanic. It could tell us a great deal about whether the Democratic base there is in lockstep with Sanders, moving toward Biden or is stuck in the middle, conflicted. Also keep an eye on congressional races in this state; there are some incumbent members of Congress facing real threats, especially from the left.

WATCH: California will award 10 percent of all Democratic delegates. How are voters deciding?