ARLINGTON, VA (April 9, 2019) — PBS NewsHour today received four Peabody Award nominations for its 2018 series “On the Fire Line,” “The Plastic Problem,” and “Inside Yemen,” as well as for “Kept Out,” produced in partnership with Reveal, the Associated Press, and PRX. Of this year’s 60 nominees, 30 Peabody Awards will be presented at the 78th annual Peabody Awards ceremony on May 18, 2019, in New York City. The George Foster Peabody Awards are administered by the Grady College of Journalism and Mass Communication at the University of Georgia. 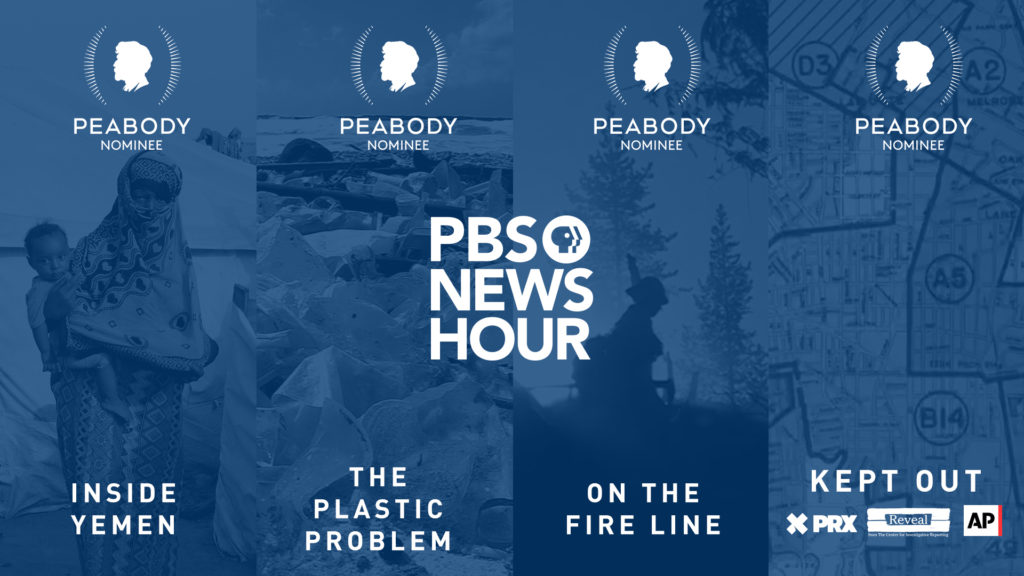 “On the Fire Line” revealed a longstanding culture of harassment and assault in the ranks of the U.S. Forest Service. The cross-platform series took a particular focus on the misconduct faced by female firefighters, and laid bare a less-talked-about aspect of harassment: the retaliation that follows when women report. The NewsHour team gathered four months of reporting, including 100 hours of interviews from 34 current and former Forest Service women spanning 13 states. Tony Tooke, head of U.S. Forest Service, resigned days after the NewsHour’s report first appeared.

“The Plastic Problem” explored the dramatic rise of single-use plastic over the past seven decades. Forty percent of all plastic products — water bottles, bags, straws and utensils — are used only once, and today plastic pollution is considered one of the largest environmental threats facing humans and animals globally. The five-part broadcast series with supplemental online and social components — reported on domestically from Boston to Seattle and from far-flung locales including the Pacific shores of Costa Rica to the rocky beaches of Easter Island — examined what’s being done to mitigate the effects of plastic on the environment.

In the series “Inside Yemen,” PBS NewsHour special correspondents Jane Ferguson and Marcia Biggs examined the brutal civil war in Yemen that has ground on for nearly five years, killing tens of thousands and pushing millions to the brink of starvation. With the support of the Pulitzer Center on Crisis Reporting, throughout 2018 the PBS NewsHour made coverage of Yemen a priority, and shone a spotlight on what the U.N. calls the world’s largest humanitarian catastrophe. Ferguson, in disguise, was the first correspondent for American television to reach rebel controlled areas in over a year last June. At great personal risk, she and Biggs brought viewers vital and visceral insights on the war unseen on any other American network.

“Kept Out” – a PBS NewsHour, Reveal, Associated Press, and PRX investigative reporting partnership – examined the denial of home-related mortgages to people of color also known as redlining. PBS NewsHour’s reports, which aired in February 2018, dialed in on home-related loans for individuals in Philadelphia. “Kept Out” was based on a year-long analysis of 31 million mortgage records. It found that in 61 cities across America people of color were more likely to be turned down for a loan, even when they made the same amount of money, tried to take out the same size loan, and wanted to buy in the same neighborhood as their white counterparts. “Kept Out” also aired in February 2018 as an hour-long radio documentary on Reveal’s radio program and podcast. The Associated Press partnered on the data analysis, distributed a series of print stories to its members, along with customized local data about lending disparities in each market. More than 25 newspapers, including the Detroit News, Tulsa World, and Virginian Pilot, ran the story on the front page.