Dead seals, marked with bald patches, washing onto shores or floating in rivers. A 900-mile-long bloom of algae stretching off the coast of Greenland, potentially suffocating wildlife. A giant, underground storehouse of carbon trapped in permafrost is leaking millions of tons of greenhouse gases into the atmosphere, heralding a feedback loop that will accelerate climate change in unpredictable ways.

These are all bleak highlights from the 2019 Arctic Report Card, unveiled on Tuesday at the American Geophysical Union Fall Meeting. Published annually by the National Oceanic and Atmospheric Administration, the 14th iteration of this peer-reviewed report examines the status of the planet’s northern expanse and changes due to global warming, with potential consequences reaching around the globe.

In addition to scientific essays, this year’s report card for the first time delivers firsthand accounts from indigenous communities confronting the Arctic’s dramatic, climate-caused transformation. More than 70 such communities depend on Arctic ecosystems, which are warming twice as fast as any other location on the planet.

“In the northern Bering Sea, sea ice used to be present with us for eight months a year,” write members of the Chevak, Golovin, Nome, Savoonga, St. Paul Island, Teller, Unalakleet and Wales communities. “Today, we may only see three or four months with ice.”

The 2019 report documented sea ice at its second-lowest level ever recorded during a summer period, out of the last 41 years of satellite observations. This disappearing sea ice not only serves as a natural bridge for Native people hunting for food, but is central to creating the food in the first place. Its loss appears to be tied to dramatic shifts in marine life, as the sea ice helps create cold patches of water where Arctic fish thrive. 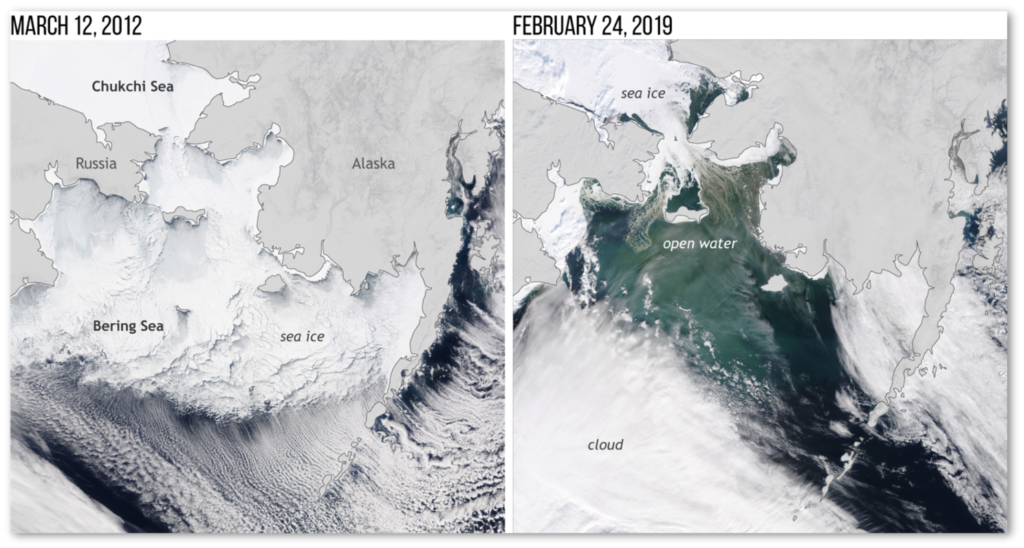 Sea ice cover in the Bering Sea on March 20, 2012 (left), and February 24, 2019 (right). Extremely low winter ice extents also occurred in the Bering Sea in 2018 and 2019. NOAA Climate.gov image based on NASA satellite images from Worldview

Without those cooler pools, economically important marine species from the south — walleye pollock and Pacific cod, for example — are migrating northward, complicating business for the billion-dollar U.S. fisheries operating near Alaska in the Bering Sea.

“Major changes are occurring. For example, we closed the cod fishery early — first time in a long time — because of the decline in stocks there,” Retired Navy Rear Adm. Timothy Gallaudet, deputy NOAA administrator, said Tuesday at a press conference in San Francisco. “Our fishery science really is important to ensure we better manage what’s occurring.”

The Bering Sea and the Barents Sea appear to be the major centers of tumult. Fish leaving southern waters are challenging underwater species — like Arctic cod — for the northernmost territory, and may also consume the marine food typically eaten by seabirds, leaving other species hungry.

Over the last year, the Bering Sea has witnessed mass die-offs of short-tailed shearwaters near Bristol Bay, while the same has happened for ivory gulls in Canada, Greenland, Svalbard and Russia. Populations of Canadian ivory gulls have declined 70 percent since the 1980s, according to the report card.

“We as indigenous people have always adapted to our environment — whether something was imposed upon us or not,” Mellisa Johnson, executive director of the Bering Sea Elders, said Tuesday at a press conference in San Francisco. “The Mother Earth is doing what she needs to do because we are not taking care of our land and sea as given. We’re going to continue to adapt and move forward with the change.” 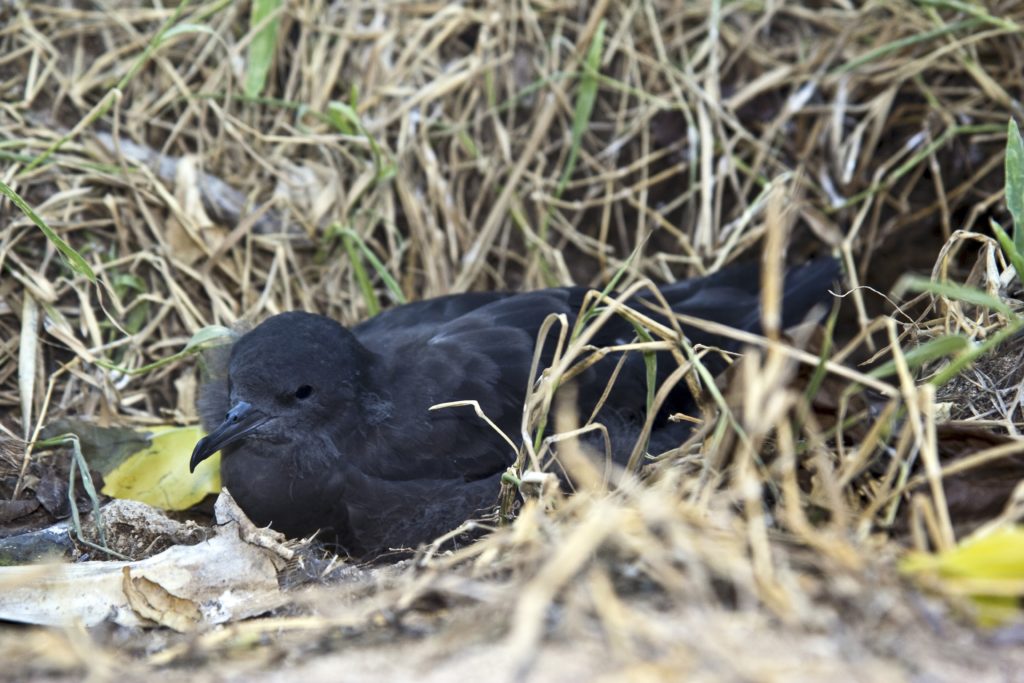 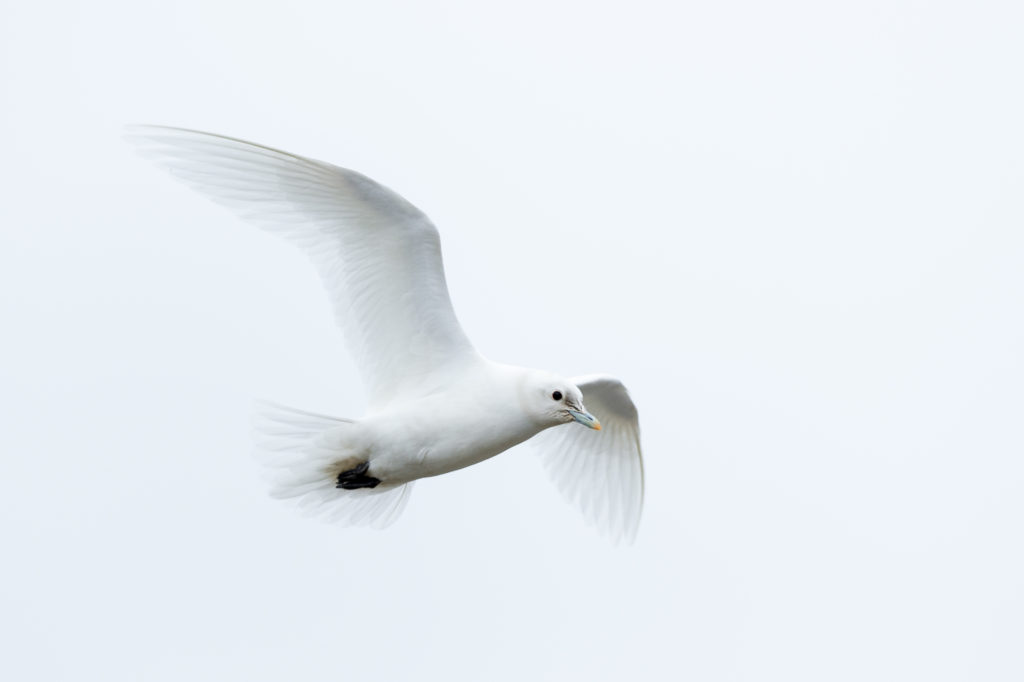 Those die-offs may also be due to the rise of algal blooms across the Arctic waterways. Red tides and other harmful algal blooms — typically a phenomena of warmer, southerly waters — are becoming more common in the north, as also detailed in last year’s report.

“Not only are we seeing these blooms in this particular region happening earlier, but they’re also substantially larger than what you would expect even later on in the year,” Karen Frey, a geographer and biogeochemist at Clark University in Worcester, Massachusetts, and co-author of the 2019 Arctic Report Card, told the PBS NewsHour.

Frey described the sea ice as a dark cap on the ocean, reflecting sunlight back into the atmosphere, keeping the algae contained and in check. When sea ice declines, large algal blooms are expected to increase.

Marine algae are essentially waterbound plants — they need sunlight and nutrients to multiply. During the winter, they’re mostly inactive because the Arctic is dark, at times for 24 hours a day. This inactivity allows nutrient to build up during the winter months. Then, as sea ice disappears in spring and summer months, sunlight can penetrate into the water, allowing algae to flourish to levels never before seen.

Without that cap, Arctic seas experiencing some of the highest algal production rates in the world, Frey said. She pointed to a 930-mile-long algal bloom — longer than California — recorded off the eastern coast of Greenland in May 2019. Based on observations from NASA’s Aqua satellite, the biomass in this bloom was 18 times higher than any event on record and occurred one month earlier than the typical peak for algal blooms. Earlier blooms suggest larger sea-choking events lasting for longer portions of the year. 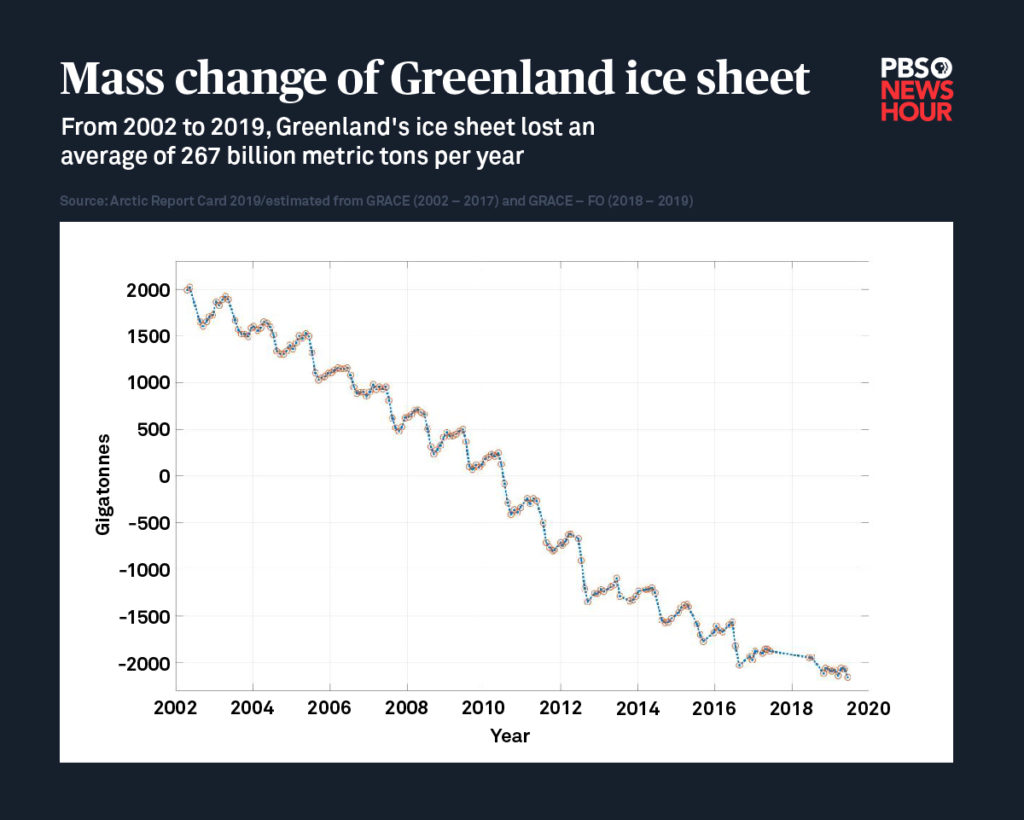 Total mass change (in gigatonnes or billions of metric tons) of the Greenland ice sheet between April 2002 and April 2019. Infographic by Megan McGrew

Another issue highlighted in the report is the age of the sea ice, which is becoming younger and younger as the years pass. In 1985, old ice — chunks that have been frozen continuously for more than four years — accounted for 33 percent of sea ice in the Arctic ocean.

“Now, it’s just 1 percent. There’s just this little sliver of this old ice remaining,” said Erich Osterberg, a climatologist at Dartmouth College. That decline is noteworthy because older sea ice is much thicker and harder to melt. “Right now, the vast majority of the sea ice is first-year ice. It’s new ice, about 70 percent of it.”

As sea ice vanishes, it allows ocean water to warm, which in turn increases air temperatures and imperils other forms of frozen water.

We’re talking about 2,000 elephants charging into the ocean every second. That’s how much mass is going from Greenland into the ocean.

Greenland, where Osterberg conducts much of his research, is home to the second-largest ice sheet on the planet — and it is disappearing. The Arctic Report Card shows that roughly 95 percent of the Greenland ice sheet melted at some point in 2019, and the magnitude of ice loss rivaled 2012 as the worst year on record. From 2002 to 2019, Greenland’s ice sheet lost 267 billion metric tons per year, on average.

These melts appear to be happening faster along the edges of the ice sheet, which speak to other disparities occurring across the Arctic region. Some parts of the Arctic are simply warming faster and faring worse than others from year to year. For example, snow cover over the North American Arctic was significantly lower than that of Eurasian portions, which remained normal last year. 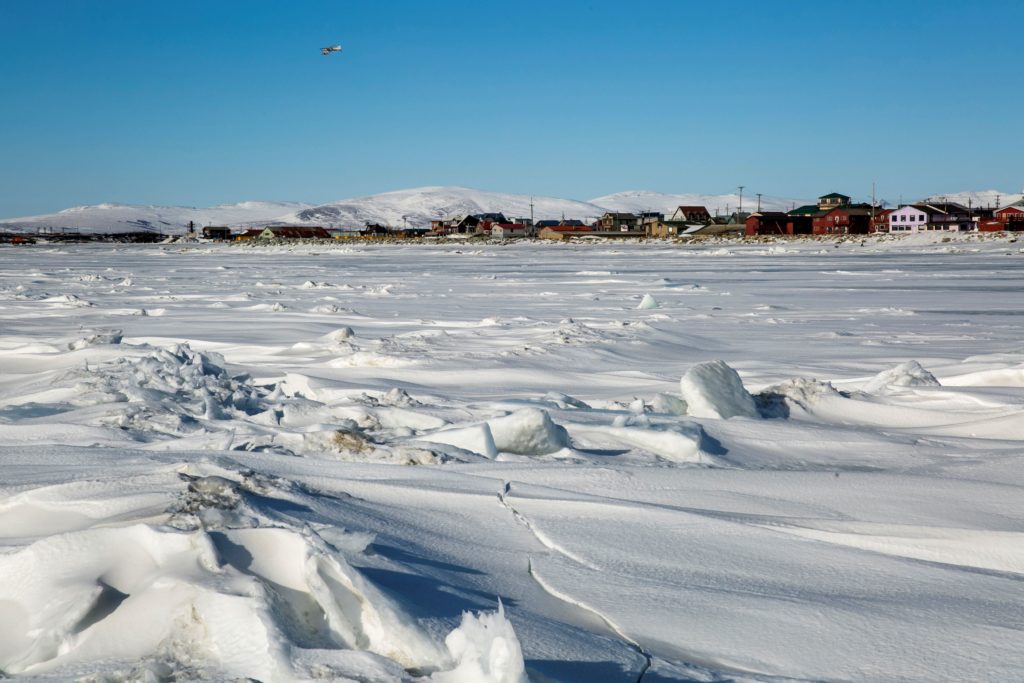 A frozen beach on the Bering Sea coast is seen near the last stretch mushers must pass before the finish line of the Iditarod dog sled race in Nome, Alaska, March 11, 2014. The Bering Sea is experiencing some of the most dramatic changes in the Arctic. Photo by REUTERS/Nathaniel Wilder

The way that permafrost — perennially frozen ground — appears to be thawing may spell ill tidings for atmospheric levels of greenhouse gases. Permafrost holds the corpses of plants, animals and microbes that died in Arctic and boreal habitats over hundreds of thousands of years.

That’s a huge cache of carbon, namely along the southern borders of the Arctic and ranging from 1,460 to 1,600 billion metric tons, currently locked in the ground. If fully released, this permafrost carbon may accelerate climate change faster than currently predicted. And this year’s Arctic Report card spotlights how those gases are already leaking — to the tune of about half a billion metric tons (or 1.1 trillion pounds)–into the atmosphere.

“We’re not really accounting for this extra carbon coming out of the Arctic,” said Ted Schuur, an ecosystem scientist at Northern Arizona University who wrote the report card’s essay on permafrost. For comparison, humans burn enough fossil fuels each year to release about 10 billion metric tons of carbon.

While Arctic communities may be suffering the most now, elsewhere is starting to feel the effects, too — as the warming air disrupts weather patterns, throws off the polar jet stream and causes summer heat waves and winter cold snaps across much of North America and Europe.

“Things that we see happen in the Arctic are kind of foreshadowing what we expect elsewhere,” Schuur said.

Left: A view of ice melting during a heatwave in Kangerlussuaq, Greenland is seen in this August 1, 2019 image obtained via social media. From 2002 to 2019, Greenland’s ice sheet lost 267 billion metric tons per year, on average, according to the 2019 Arctic Report Card. Photo by Caspar Haarloev from "Into the Ice" documentary via Reuters