As the public conversation about climate change gets increasingly serious, many Americans may be wondering: How do my individual choices affect climate change?

Household consumption – food, housing, transportation, apparel and other personal services – is an important contributor to greenhouse gas emissions. Everything you eat or wear, or every time you drive, you add to the global total emissions. The typical American’s annual per capita carbon footprint is over five times the world per capita average.

A study by our research team, including Kaihui Song, Shen Qu and Sai Liang, published on September 10, sheds light on the global carbon footprint of U.S. households.

1. Some activities have a bigger impact

We looked at data from 1995 to 2014 from the U.S. Consumer Expenditure Survey, as well as the World Input-Output Database. We looked at the total global warming potential of all greenhouse gas emissions, not just carbon dioxide, as measured in their “carbon dioxide equivalent.”

We found that over 20% of all U.S. emissions are directly attributed to household consumption. If you consider indirect emissions, this figure is closer to 80%.

Let’s zoom in on the latest available annual numbers, mostly from 2009, which give a better sense of these staggering impacts.

U.S. households generate 5.43 gigatons of carbon dioxide equivalent emissions every year. About 82.3% of those emissions are produced domestically. 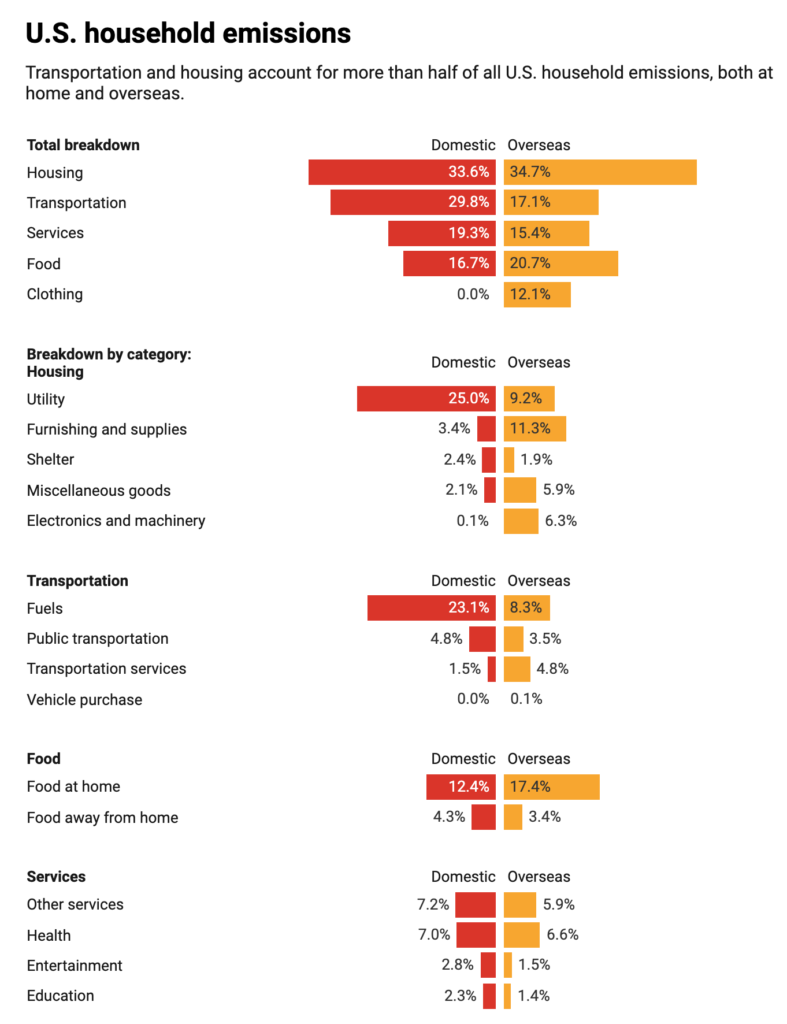 Transportation and housing account for more than half of all U.S. household emissions, both at home and overseas. Chart: The Conversation, CC-BY-ND Source: Environment International (2019)

Transportation and housing contribute over 60% to the total domestic carbon footprint of U.S. households. Supply chain emissions from services – such as health care, banking and lodging – and food contribute the next largest amounts.

Food, furnishing and supplies, and clothing are the three largest drivers of overseas emissions from U.S. households.

The overseas carbon footprint driven by the U.S. households is distributed disproportionately among countries.

The most considerable portion of overseas carbon footprint of U.S. households is actually released in China, followed by Canada, India, Russia and Mexico.

While the most substantial amount of the U.S.’s overseas carbon footprint is from China, it is only 3.0% of China’s domestic emissions. The majority of China’s emissions comes from the activity of its inhabitants, as well as consumption in other countries beyond the U.S.

On the other hand, Canada, Mexico and Taiwan trace a sizeable proportion of their domestic emissions to U.S. household consumption. 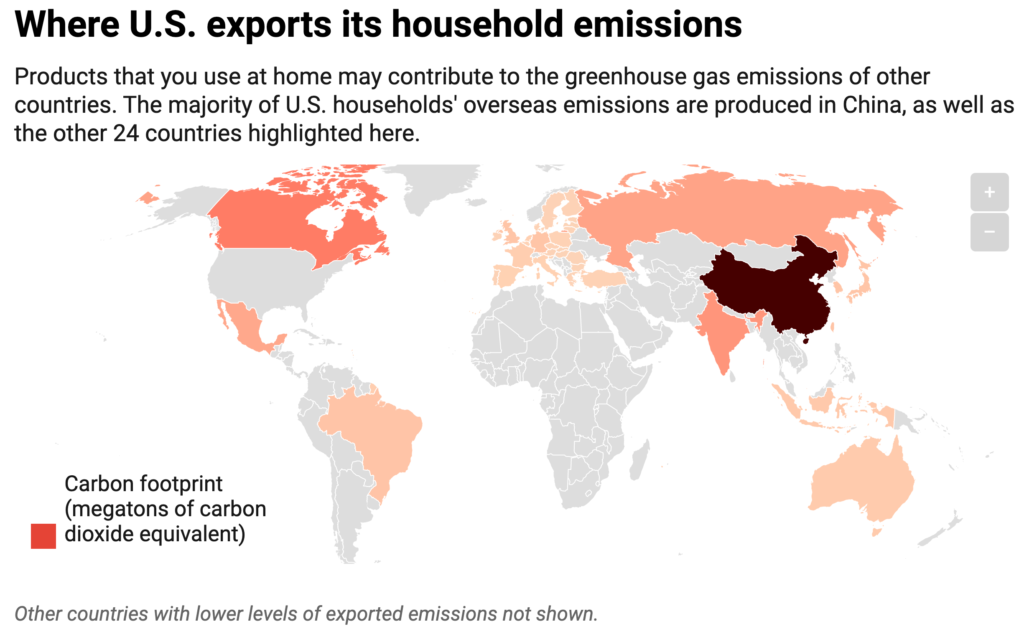 Products that you use at home may contribute to the greenhouse gas emissions of other countries. The majority of U.S. households’ overseas emissions are produced in China, as well as the other 24 countries highlighted here. Map by The Conversation, CC-BY-ND Source: Environment International (2019)

3. Wealthier families have a larger footprint

A household’s carbon footprint generally increases with its income, ranging from 19.3 to 91.5 tons of CO2-equivalent annually.

The average carbon footprint of the wealthiest households is over five times that of the poorest.

On the other hand, wealthy consumers with more than $100,000 annual household income accounted for 22.3% of the total population but were responsible for nearly one-third of households’ total carbon footprint. 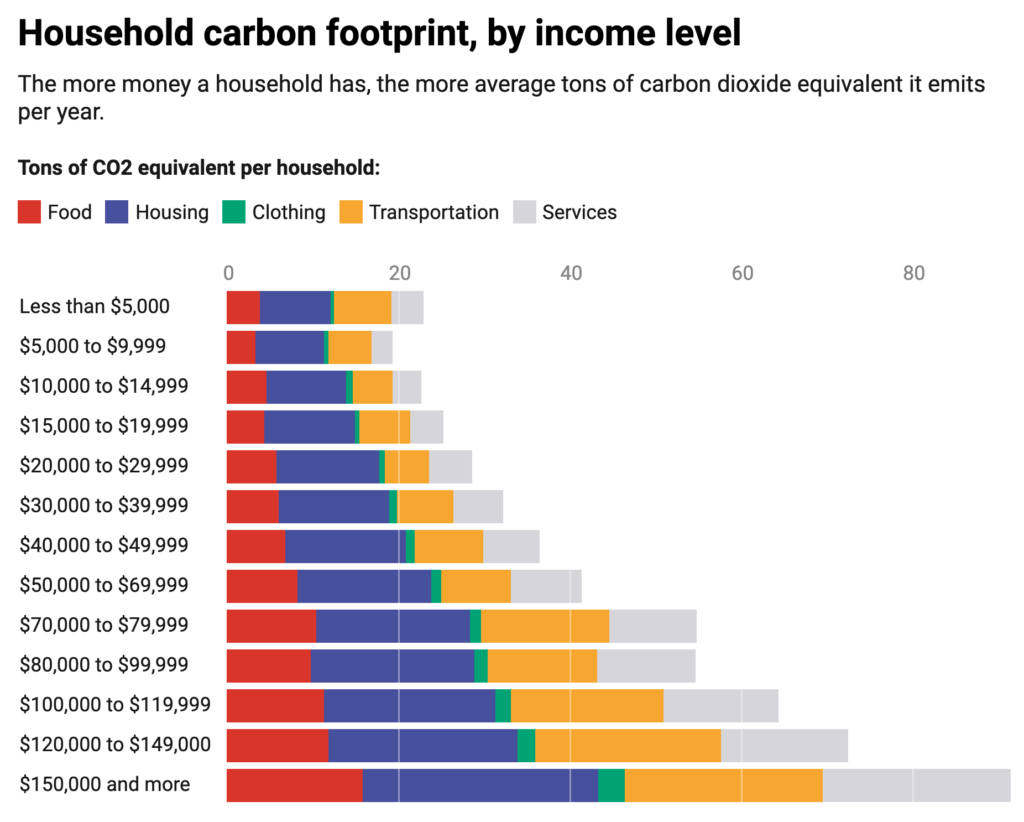 The more money a household has, the more average tons of carbon dioxide equivalent it emits per year. Chart by The Conversation, CC-BY-ND Source: Environmental International (2019)

4. The Great Recession caused a dip

U.S. households’ carbon footprint had been steadily growing from 1995 until 2005, when it began to plateau.

In 2009, the combined domestic and overseas footprint dropped by 8.5% from the previous year, mainly due to the Great Recession. 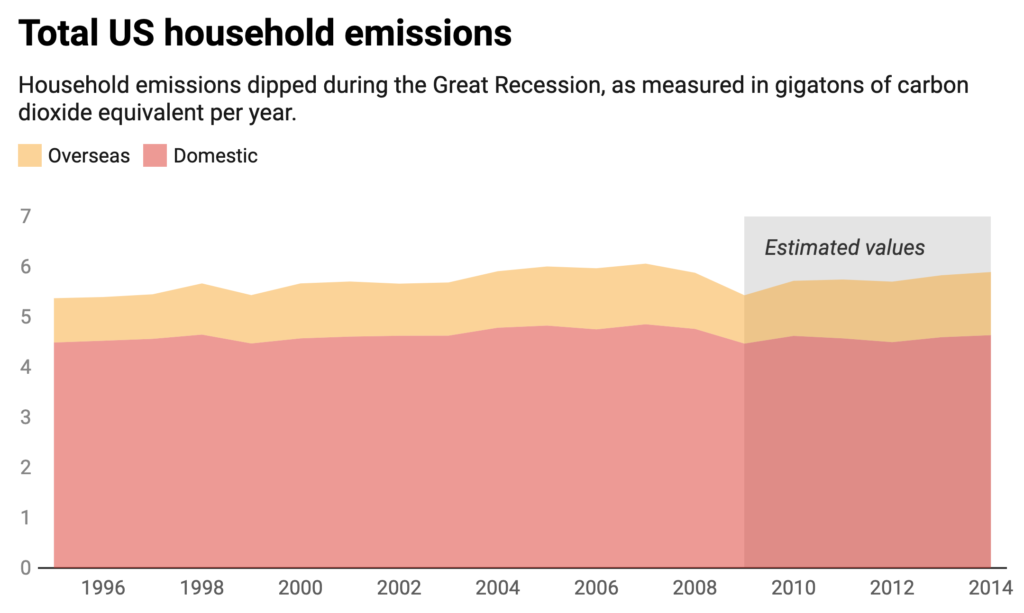 The variations of household carbon footprint from 1995 to 2014 were largely driven in transportation use, including emissions from vehicle manufacturing, fuel and public transportation.

Transportation emissions, both per capita and per household, have continued to rise over time. This is despite significantly reduced tailpipe emissions from vehicles and nearly 30% improvement in fuel economy of cars in this period. Mandates and standards, such as Corporate Average Fuel Economy (CAFE) at the federal level and Zero-Emission Vehicle (ZEV) at the state level, enabled this rapid progress.

So what’s causing the emissions to keep rising? People want to travel more and are more likely to own more household vehicles. Meanwhile, vehicles have a lower average number of occupants. Mass transit and active modes of transportation, like bike riding, are growing slowly. 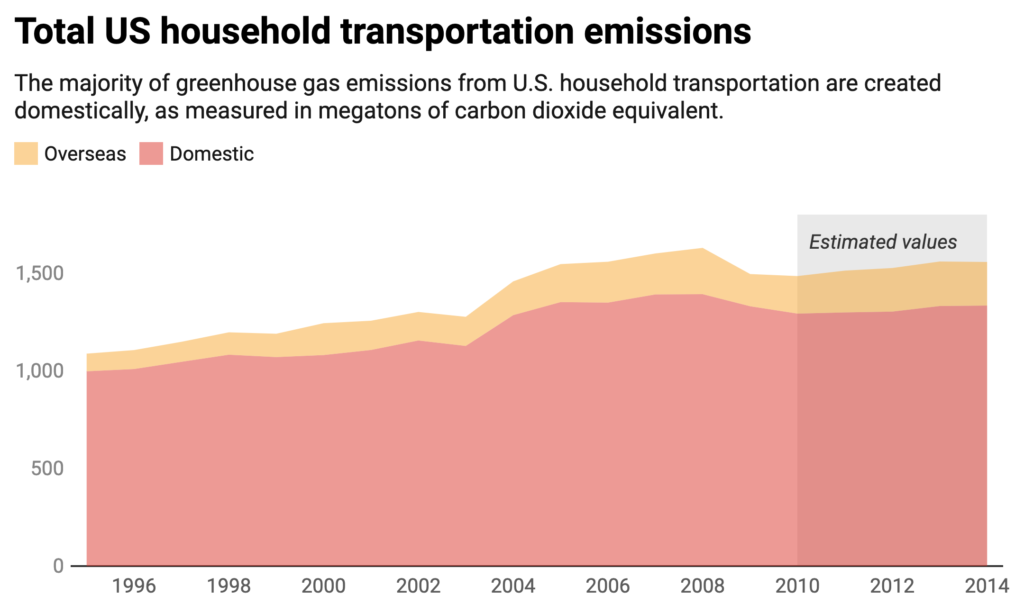 The majority of greenhouse gas emissions from U.S. household transportation are created domestically, as measured in megatons of carbon dioxide equivalent. Chart by The Conversation, CC-BY-ND Source: Environment International (2019)

Morteza Taiebat is a Ph.D. candidate in environment and sustainability at the University of Michigan.

Ming Xu is an associate professor at the University of Michigan's School for Environment and Sustainability.