6 things you may not know about jellyfish

Jellyfish — the pulsing, jello-like balloons of the ocean — have fascinated beachgoers and aquarium visitors for generations. More than 2,000 species of “jellies” — as they are known in the scientific community — exist on planet Earth, but to many, the creatures remain a beautiful, but alien, oddity.

1. Some jellies have eyes

Jellyfish eyes range from primitive to more complex. Some simply have what Janssen described as “eye spots,” which detect light, but little else. Others, including box jellies (Tripedalia cystophora), have a more complex visual system complete with lenses, retinas and corneas. These jellies can see blurry images.

Not only do the complex eyes give a means to visually navigate their environments, but in some cases, they allow jellies to detect gravity. A crystal known as a “statolith” hangs under the eye, like a tennis ball hanging from a rope. As a result, they always knows which way is up.

2. Jellies are not always free-swimming

Jellies are best known for their graceful bobs up and down the water column. But the early days for jellies are much more sedentary.

Juvenile jellyfish exist as polyps and are “bottom living,” Janssen said. They attach to rocks and corals on the ocean floor, sucking up plankton food, similar to sea anemones or coral.

Given enough time — and the right conditions — the ground-based polyps transform into “ephyrae.” That’s the free-swimming equivalent of a jelly’s teenage years, before the animals finally mature into the adult “medusa” shape we know so well. 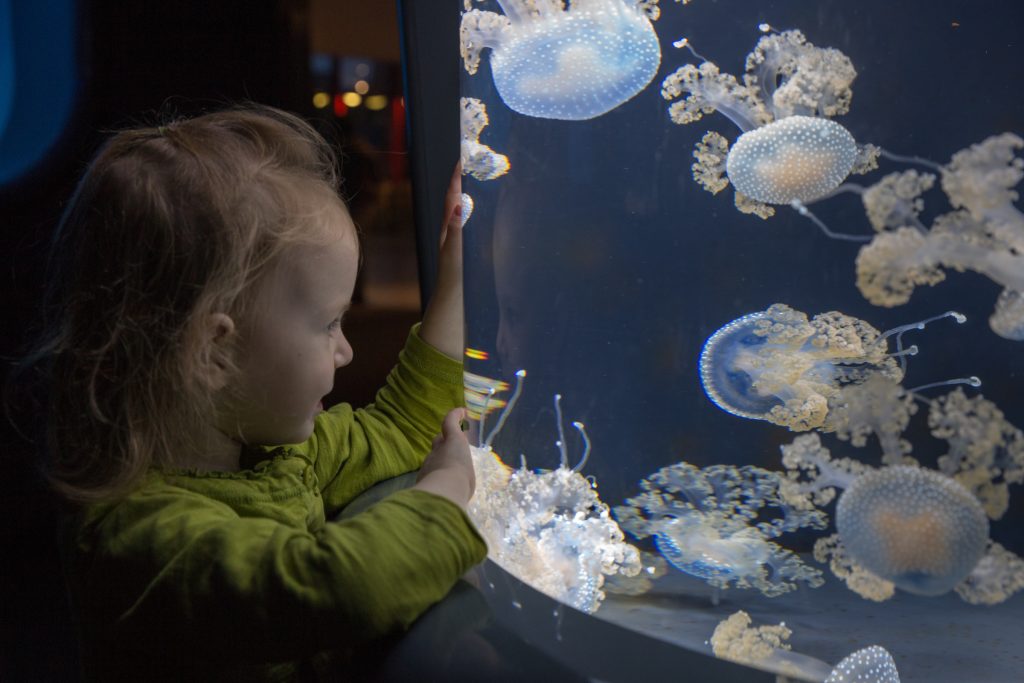 3. Jellies can live in freshwater

It’s well known that jellies thrive in the open ocean and in brackish water. But zero salt content in their water? That’s not a problem for some jellies.

The tiny freshwater jellyfish (Craspedacusta sowerbii), for example, is native to China’s Yangtze River Basin. But it can now be found in freshwater systems around the world, including the United States.

“Bubbles tend to be not so great for jellies, and in the public aquarium world, that makes it a little tricky trying to keep and display these beautiful animals,” Janssen said.

Keeping the bubbles away takes quite a bit of engineering. Creating conditions that encourage jellies to grow correctly and float effortlessly requires a rounded tank and a particular flow rate for the circulating water.

“You need to have just enough flow for them to not rest on the bottom, but also you don’t want to have so much flow that they are rocketing around,” Janssen said. “They need to be able to pick up their food and also not to be contacting the walls and edges of the exhibit and interacting with each other too much. As you can imagine with those long tentacles, it could be a big tangled mess, and it’s not fun for anyone.”

There are the true jellies. Think the “scyphozoan” jellies that come complete with weaponized, stinging cells. But what about animals like comb jellies? Technically, they’re not part of the club.

A comb jelly uses its cilia to swim through a display at Chicago’s Shedd Aquarium. Video by Victor Grigas via Creative Commons. Gif by Andrew Wagner.

“They don’t have any stinging cells, and by definition true jellies would have to have stinging cells,” Janssen said. But that doesn’t make them any less fascinating to the jellies caretaker.

The Mnemiopsis species takes the visual performance one step further with bioluminesce. “If the water gets stirred, they fire off this gentle, electric blue light, which is fantastic,” Janssen said.

Bathe in the warm waters off the coast of the southern United States, and you may fall victim to an itching reaction known colloquially as “sea lice.”

But the rash is actually a misnomer. It is not caused by the fish parasite bearing the same name, but rather thimble jellies in their free-swimming ephyra stage.

“You got stung by juvenile jellyfish when you were in the water, and you don’t feel it until a little bit later,” Janssen said. “You didn’t see them and got stung by them, and those little nematocysts that get fired into your skin then start to fire off after you get out of the water.”

It all makes for the most unpleasant of beach souvenirs.

For more facts on jellyfish, watch NewsHour’s full interview with Janssen below.

Relax, take a break and marvel at these jellies. We’re live at the National Aquarium in Baltimore where Jennie Janssen — Assistant Curator of Blue Wonders — has five facts you may not know about jellyfish. As always, leave your questions in the comments section.

Left: A jellyfish floats in the sea near the Adriatic town of Split, Croatia. Photo by Matko Biljak/Reuters.