April showers might mean May flowers, but this year’s May showers could bring a giant choking swarm of death to wildlife in the Gulf of Mexico.

On Monday, the National Oceanic and Atmospheric Administration released its annual Gulf forecast for this summer’s “dead zone” — a pocket of little to no oxygen created by overgrown algal blooms of phytoplankton. When the blooms die along the coast — a cycle that happens each year — their rotting corpses cause bacteria to suck up all the oxygen from the ocean, killing off other marine life, like shrimp, fish and molluscs.

NOAA forecasts a dead zone that spans approximately 7,800 square miles, which could be about as big as the state of New Jersey, or in more ominous estimates, Massachusetts. If this prediction holds true, this event would be the second largest on the list of Gulf dead zones in more than three decades, though measurements only date back to 1985.

This year’s forecasted dead zone would be 50 percent larger than the average seen in the last five years.

Why is this year so much worse? There are a few factors at play. Rainfall in May is one of the drivers of the Gulf’s dead zone. May 2019 capped off the wettest 12 months in U.S. history. Severe storms, including more than 500 tornadoes in a 30-day span, battered the Midwest and South, causing widespread flooding across much of the nation’s farmland.

Even if farms ceased using nitrogen-based fertilizers today, it would take 30 years for agrochemicals in the soil to shrink to a level that didn’t cause dead zones.

But “nutrients lay the groundwork for the dead zone,” said David Scheurer, an oceanographer and deputy director of competitive research program at NOAA’s National Ocean Service.

While the wet spring and historic flooding played a role, these nutrients — like the industrial fertilizers used by American farmers and animal waste that runs off into fresh waterways during rainfall and floods — also supercharges the growth of microorganisms.

In addition to the toxic consequences for the creatures that live in and around the Gulf, a dead zone of this size may affect the price of your seafood. Here’s what you need to know.

NOAA’s forecast for the annual hypoxic zone — the technical name for a dead zone — is actually a compilation of predictions made by five universities: the University of Michigan, Louisiana State University, William & Mary’s Virginia Institute of Marine Science, North Carolina State University and Dalhousie University in Nova Scotia, Canada.

All of the models have a good reputation for predicting the size of the dead zone — typically pinning down about 70 percent of the variability from year-to-year. For example, here are the predictions versus the final observations made by the Virginia Institute of Marine Science over the last 35 years: 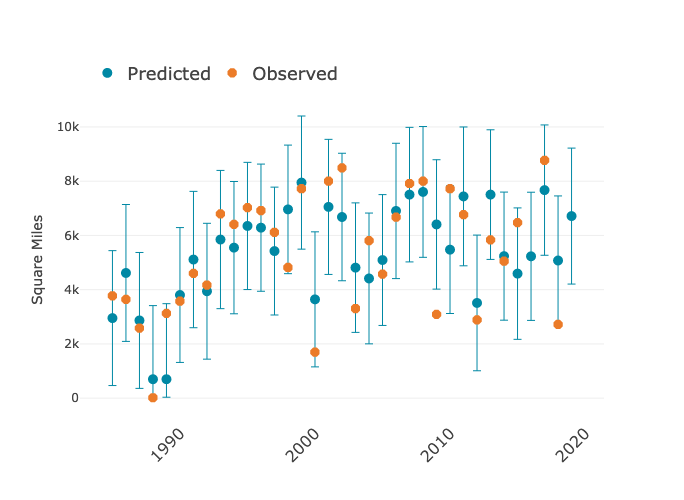 The predicted size of Gulf dead zones (blue) versus the final observations (orange), 1985 to 2019. Image by David Forrest/Virginia Institute of Marine Science

The nutrient load refers to the amount of nitrogen (namely nitrate) and phosphorous that wash into watersheds of the Mississippi and Atchafalaya rivers, and then consequently into the Gulf of Mexico. Both nitrate and phosphorus are common ingredients in agrochemicals, and both can fuel algal blooms.

At 8,776 square miles, 2017’s dead zone in the Gulf of Mexico was the largest ever measured (pictured). If the 2019 forecast rings true, this year’s dead zone could resemble the one from 2017. Image courtesy of N. Rabalais, LSU/LUMCON

More than half of that nitrate comes from agricultural activities in the surrounding watershed, said Nancy Rabalais, a Louisiana State University ocean ecologist, who co-authored one of the university forecasts.

Because of the heavy rains, this pollution discharge was 18 percent and 49 percent above the long-term average, respectively, even though many farmers hadn’t had the opportunity to plant this year’s crops. That could be because the farmers used more fertilizer last year — or, because the rains were so frequent this winter and spring.

“So there’s still a history in the soil that could be washed out during a flood year,” Rabalais said. Case in point: A 2018 study found even if farms ceased using nitrogen today, it would take 30 years for agrochemicals in the soil to shrink to a level that didn’t cause dead zones.

We’ll know the final verdict on this year’s dead zone in late July, when marine scientists will cruise around the Gulf shore, capturing physical observations of the hypoxic zone. That time of year is typically when the size of the dead zone peaks, but it also represents the tail end of shrimping season.

“When the hypoxic zone is present you can’t catch shrimp over an area as large as the size of the state of New Jersey, which means a reduced catch,” Rabalais said.

The dead zone builds over months, in the pockets of water where trawlers catch large shrimp. A bigger dead zone means those shrimp boats must travel farther offshore.

“It costs more to get offshore to get the larger shrimp outside of the low-oxygen zone, and of course that drives the price,” Rabalais said. 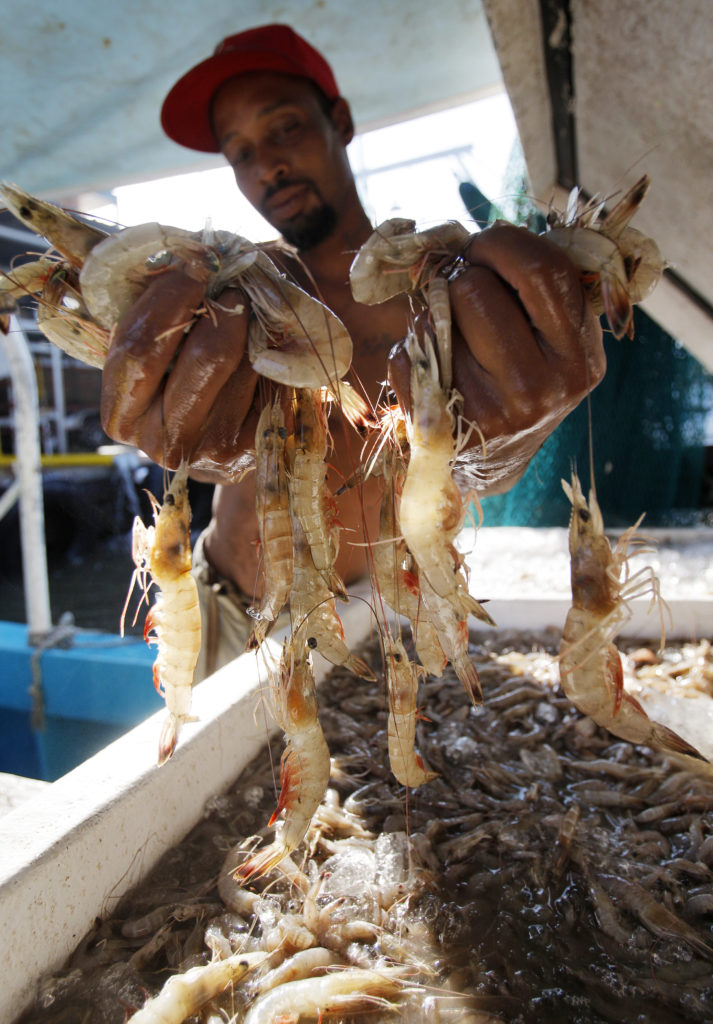 Deckhand David Merrick shows some of the catch after returning from a two-day shrimp haul at Joshua’s Marina in Buras, Louisiana May 17, 2010. Photo by REUTERS/Hans Deryk

A 2017 study estimated that every time the Gulf’s dead zone increases by 6 percent (400 square miles) over the average, the price of large shrimp rises by 1 percent. Small shrimp live closer to shore and are less affected by dead zones but also bring in less money for states like Louisiana.

Shrimpers along the Gulf Coast operate on fine margins — with the average person netting about $55,000 per year — so even small fluctuations may affect people’s livelihoods. Shrimp in Louisiana, overall, contributes $170 million to the state’s economy.

“It’s going to take work in the watershed to try to reduce the nutrients before they get to the Mississippi River — that includes a whole suite of best management practices including cover crops, buffer strips, less fertilizer and more diversity in farming techniques,” Rabalais said. “These practices are employed on a small scale, but not on the large scale that’s needed to prevent dead zones.”

Left: The rising waters of the Gulf of Mexico crash at the shoreline of the Treasure Island community of West Galveston Island, Texas March 6, 2014. Photo by REUTERS/Rick Wilking

What’s behind the recent rash of violent weather