The plants you see on land remove 29 percent of our carbon emissions from the atmosphere, according to recent estimates. But if we want to stave off global warming, given humanity’s current rate of emissions, that may not be enough. So to siphon even more carbon out of our air and store it in the ground, growing deeper plant roots could help.

You don’t need to genetically modify plants to get them to grow deeper roots. Some plants already do, and now scientists have figured out why and how to control it.

The team discovered a gene that controls the direction roots grow…

The team discovered a gene that controls the direction roots grow and learned that some plants have a version of this trait that makes their roots grow deeper. The plants do this, not by growing longer, but by growing sideways less often and downward more often.

As roots grow, they nourish and stabilize plants, but they also help the planet by storing carbon in the earth — or at least until the plant dies, decomposes and releases the carbon back into the atmosphere.

The deeper roots grow, the longer they can store carbon because they don’t get degraded by microbes as quickly as roots closer to the surface, said Wolfgang Busch, a plant geneticist at the Salk Institute who led the study.

Designing plants with deeper roots is one mission of the Harnessing Plants Initiative, a collaboration that launched in 2017. The $35 million initiative aims to develop crops that can remove significant amounts of carbon from the atmosphere by growing plants with deeper, bulkier and more carbon dense roots.

Among the public, “There’s a lot of outcry about genetically modified plants,” said Erin Sparks, a root biologist at the University of Delaware, who was not involved in the study. And though she doesn’t think GMOs are bad, she said that public perception can affect how we accept such technology. In this case, the technology could amplify much-needed efforts to tackle climate change.

Plant roots grow downward by sensing gravity using tiny, stone-like starch balls — called granules — in their cells. When gravity pulls the granules to the “bottom” of a cell, it triggers signals that tell the plant “this way is down.”

But if a root hits a rock or senses nutrients in another direction, a separate signal will switch on and tell it to turn. How quickly and frequently the root changes directions determines how deep, versus how spread out, the roots will grow over time.

Scientists had previously surmised the plant hormone auxin was involved in the root turning process because it controls most aspects of plant growth, but they didn’t know which gene was responsible.

So the researchers turned to the weed-like plant Arabidopsis to study root behavior. Think of Arabidopsis as the floral version of a lab mouse — it is commonly studied in laboratories to decipher plant genetics.

Busch’s team gave 215 plants a low dose of a chemical known to block the auxin hormone, and watched for drastic changes in the roots. 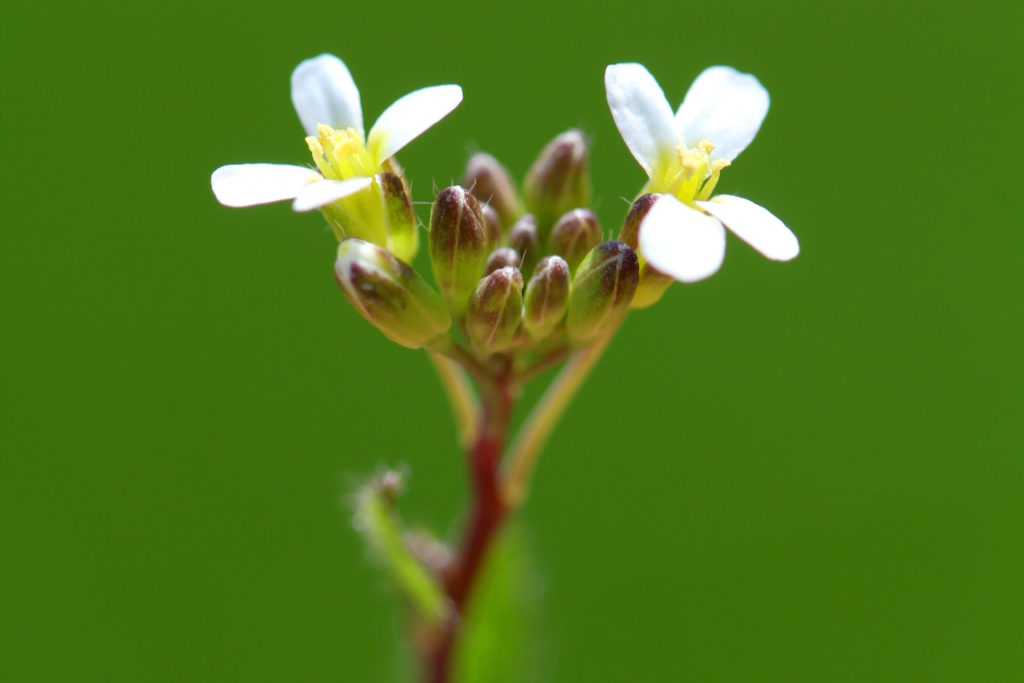 When the researchers scanned the DNA in both groups, they found two slightly different versions of one particular gene called Exocyst70A3.

There’s a good chance that this deeper-rooting trait is present in other crops.

Prior research had found that Exocyst70A3 is responsible for making a protein that helps move auxin out of the cell, a necessary step in root growth signaling.

The researchers reasoned that, because these two groups displayed such drastic contrasts in root architecture when auxin hormones were blocked, they might also see other differences when the roots were grown chemical-free. So they compared how deep each group grew their roots without the blocker.

Between the deep- and shallow-rooted plants, shallow roots were also more drought-resistant, producing in some cases as many as 100 times more seeds under drought conditions than the deep-root group.

In a potential future of persistent, globe-altering drought, designing deeper roots may seem the wrong way to grow. But Busch said because Arabidopsis is a small plant, its shallow root system has to rely on surface water rather than deeper water reservoirs to survive. He said for larger plants, deeper roots could help increase drought resistance by accessing water further down in the soil that is unavailable to Arabidopsis.

There’s a good chance that this deeper-rooting trait is present in other crops because most plants on land have the same group of genes — called a gene family — that contains Exocyst 70A3.

Sparks said that because the researchers found subtle changes in how roots grow naturally, the odds are strong that moving these traits to other plants will work outside of the lab.

The team next plans to search for similar genes in corn, soybean and canola. If a similar gene is found, the researchers will look for ways to promote root growth in those crops. Once developed, the goal of the Harnessing Plants Initiative will then be to convince farmers to plant these deeper-rooting versions of crops.