Everyone wants to save the bees. But as populations decline every year, we may be saving them to death.

Human efforts to breed more of these insects in artificial beehives and plant more flowers may seem the obvious way to stave off heavy losses.

New research shows the answer is not that clear cut, because viruses may be spilling over from commercial honeybee colonies into wild bee populations, according to a study from the University of Vermont published Wednesday in PLOS One.

Flowers have been suspected as reservoirs for bee viruses, but no researcher had linked virus deposits on flowers to bumblebee infections in the wild until this study.

Like honeybees, which are invaluable for agriculture, wild bumblebees also play a significant role in crop pollination. Though people are more familiar with honeybee die-offs — such as with colony collapse disorder — wild bumblebees have been struggling too. A handful of bumblebee species have declined by up to 96 percent in the U.S., according to the National Agricultural Library’s website.

The causes have been largely understudied, although pesticides, infectious disease and shrinking habitat due to climate change have been suspected, said Samantha Alger, an ecologist from the University of Vermont who led the new research.

Filling in one piece of the puzzle, the study revealed wild bumblebees pick up more viruses the closer they forage to managed honeybee colonies. But if bumblebees don’t venture into the commercial hives, how are they picking up viruses?

Flowers have been suspected as reservoirs for bee viruses, but no researcher had linked virus deposits on flowers to bumblebee infections in the wild until this study. And the results could have implications for how we lend our inter-species help.

The team plucked wild bumblebees from 19 sites around northern Vermont. Some sites were close to a commercial apiary — within 0.2 miles or a short city block — while others were farther away — at least 0.6 miles. If honeybees were present, the researchers collected them too.

The team then measured the number of viruses stuck to each bee. Just because an animal has a virus on its outside doesn’t mean it has an infection. You may have touched your friend’s influenza-soaked tissue, but washed your hands before the flu infected you. So the researchers also tested each bee for virus genetic material, which is only made once the virus infects a host. 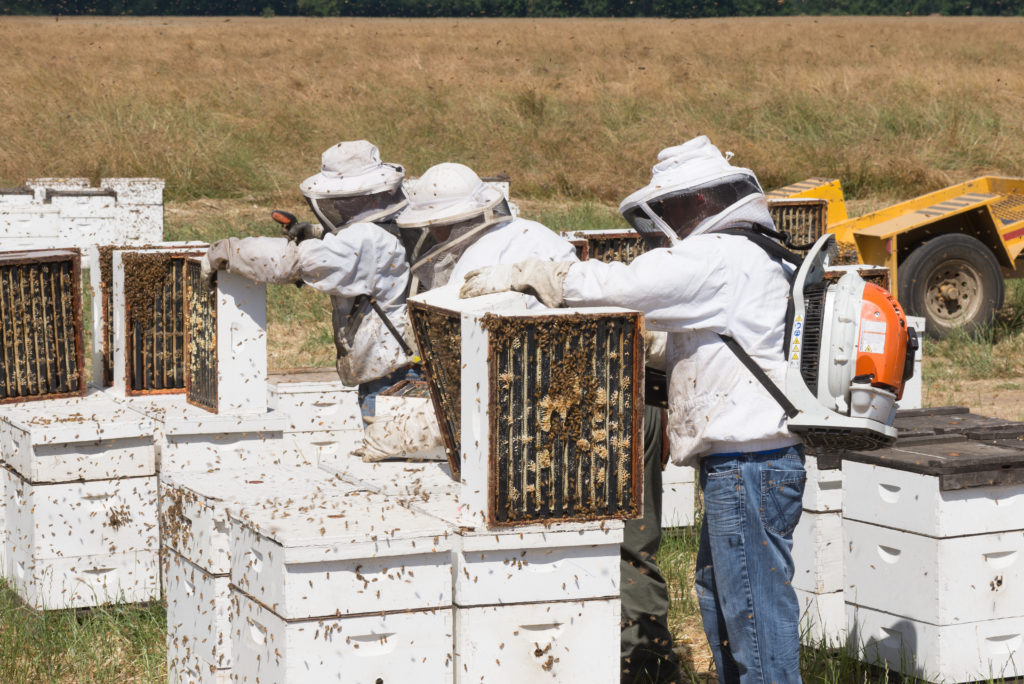 The team looked at two viruses — deformed wing virus and black queen cell virus — both of which infect honeybees and bumblebees. These infections can potentially cause significant colony damage in honeybees, but researchers don’t know yet what they do to bumblebee colonies.

To figure out how honeybee viruses are jumping to bumblebees, the researchers collected flower samples. Back in the lab, they tested ground-up flowers for viruses and mapped how close the contaminated flowers were to apiaries. They suspected that bees shed virus pieces on flowers during foraging.

All of the honeybee colonies tested by the researchers were positive for both viruses, an unfortunate but

But the number of wild bumblebees carrying viruses varied depending on the proximity to the domesticated hives. There was also variation between the two viruses. 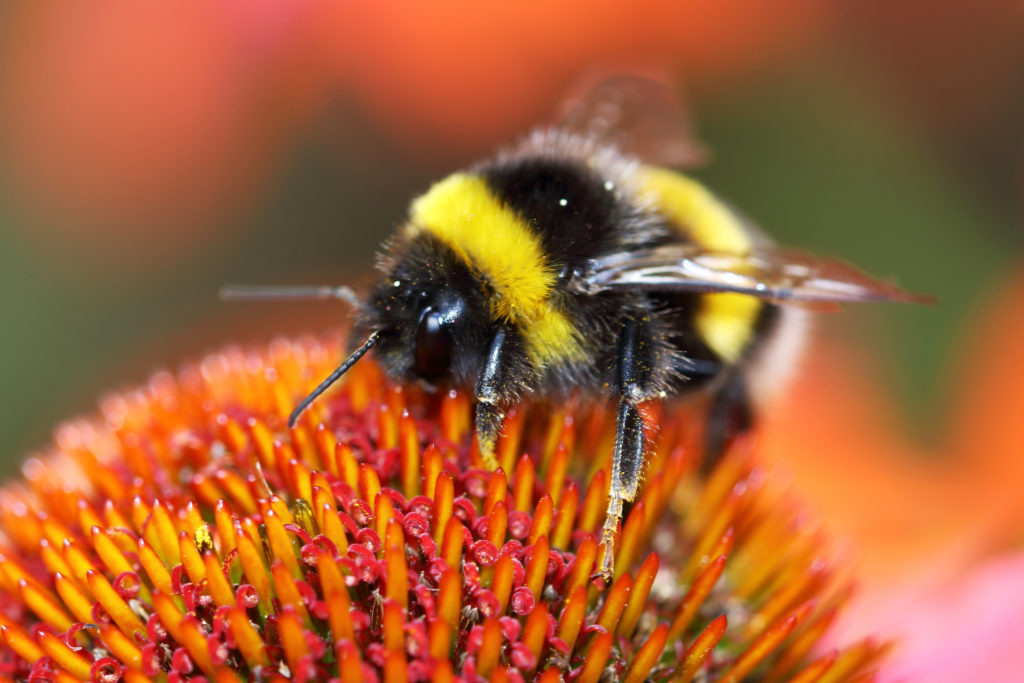 A bumblebee forages for food. Bumblebees vibrate their bodies to extract pollen. This technique is called buzz pollination, and honeybees can’t do it. Photo by Jolanta Mayerberg/via Adobe Stock

When the researchers looked at infected flowers, they noticed a similar trend. Of the 20 percent of flowers that tested positive for viruses, all were picked close to apiaries. And the denser the flower patch in these areas, the higher the rate of deformed wing virus infection in bumblebees.

Maybe we need to have a [buffer] area without flowers to stop diseases from spreading to wild bees.

If human-managed bees and bee-friendly flowers are acting as hotspots for pathogens, keeping more bees and planting more flowers may be contributing to the steep losses in commercial pollinators seen in the U.S. each year, as well as fueling the decline of wild bees. The more that bees are transported and concentrated for larger-scale pollination events, the more opportunities for diseases to spread.

And it’s not just a one-way street.

“It’s likely the transmission is going both ways,” said Scott McArt, a pollinator ecologist at Cornell University who was not involved in the study. Even if diseases in commercial bees are eliminated, new infections from the wild bee population, which are known to harbor pathogens, could spill back into managed populations, making disease eradication even tougher than it is now.

From the urban gardener to the rural farmer, people are encouraged to grow “bee-friendly” plants. 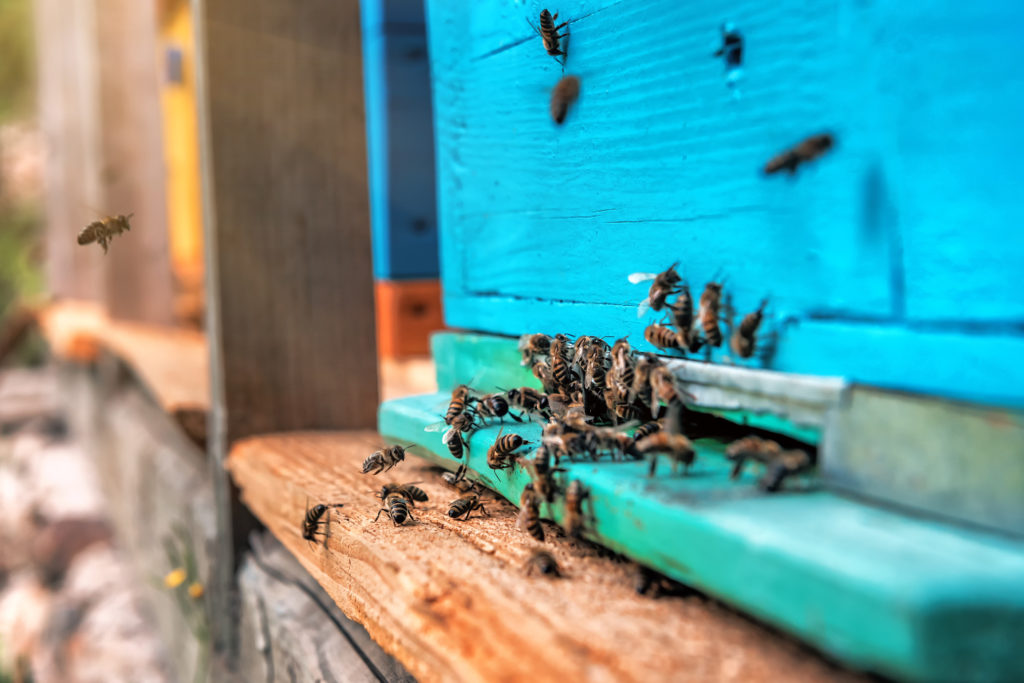 “But in some cases you might actually be increasing disease levels when you plant those flowers,” said Sheila Colla, a conservation biologist at York University who was not involved in the study. “Maybe we need to have a [buffer] area without flowers to stop diseases from spreading to wild bees.”

Nobody is suggesting we stop planting flowers altogether. “We know that habitat loss is already a big problem for bees,” said Alger. Instead, she’s now investigating if increasing plant diversity, or culling certain plants could help decrease disease transmission.

She added that beekeepers and farmers need to take a long, hard look at how they are managing bees.

Left: A honeybee gets ready to enter a flower. Photo by Serghei Velusceac/via Adobe Stock