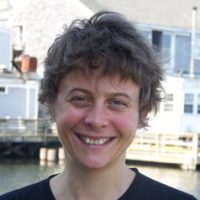 The concept of a canary in a coal mine – a sensitive species that provides an alert to danger – originated with British miners, who carried actual canaries underground through the mid-1980s to detect the presence of deadly carbon monoxide gas. Today another bird, the Emperor Penguin, is providing a similar warning about the planetary effects of burning fossil fuels.

As a seabird ecologist, I develop mathematical models to understand and predict how seabirds respond to environmental change. My research integrates many areas of science, including the expertise of climatologists, to improve our ability to anticipate future ecological consequences of climate change.

Most recently, I worked with colleagues to combine what we know about the life history of Emperor Penguins with different potential climate scenarios outlined in the 2015 Paris Agreement, to combat climate change and adapt to its effects. We wanted to understand how climate change could affect this iconic species, whose unique life habits were documented in the award-winning film “March of the Penguins.”

Our newly published study found that if climate change continues at its current rate, Emperor Penguins could virtually disappear by the year 2100 due to loss of Antarctic sea ice. However, a more aggressive global climate policy can halt the penguins’ march to extinction. 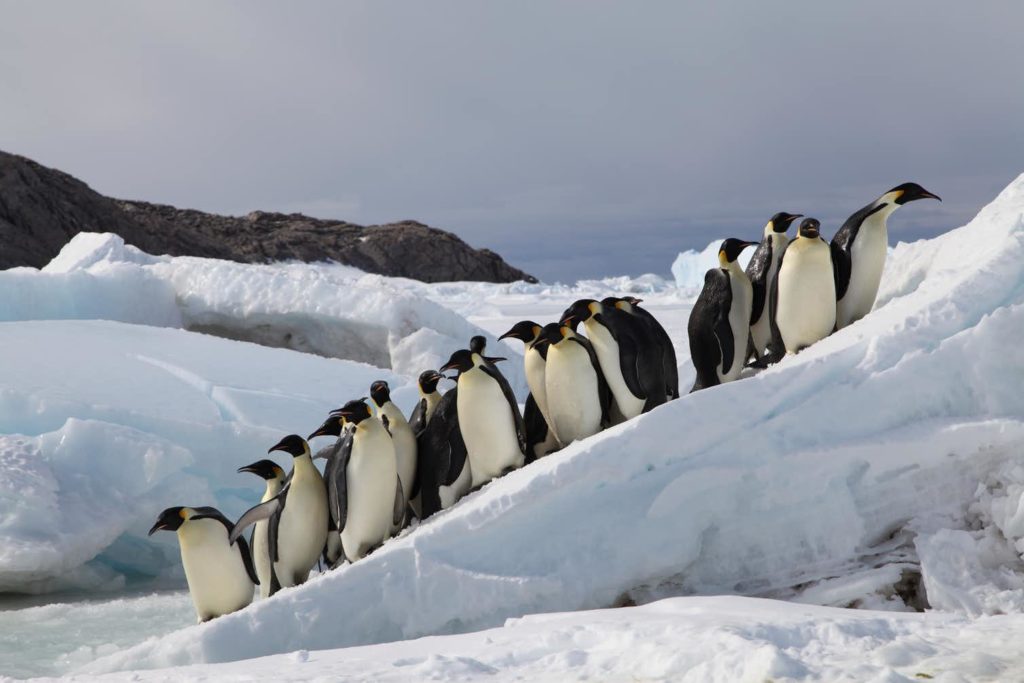 As many scientific reports have shown, human activities are increasing carbon dioxide concentrations in Earth’s atmosphere, which is warming the planet. Today atmospheric CO2 levels stand at slightly over 410 parts per million, well above anything the planet has experienced in millions of years.

If this trend continues, scientists project that CO2 in the atmosphere could reach 950 parts per million by 2100. These conditions would produce a very different world from today’s.

Emperor Penguins are living indicators whose population trends can illustrate the consequences of these changes. Although they are found in Antarctica, far from human civilization, they live in such delicate balance with their rapidly changing environment that they have become modern-day canaries.

A fate tied to sea ice

I have spent almost 20 years studying Emperor Penguins’ unique adaptations to the harsh conditions of their sea ice home. Each year, the surface of the ocean around Antarctica freezes over in the winter and melts back in summer. Penguins use the ice as a home base for breeding, feeding and molting, arriving at their colony from ocean waters in March or April after sea ice has formed for the Southern Hemisphere’s winter season. 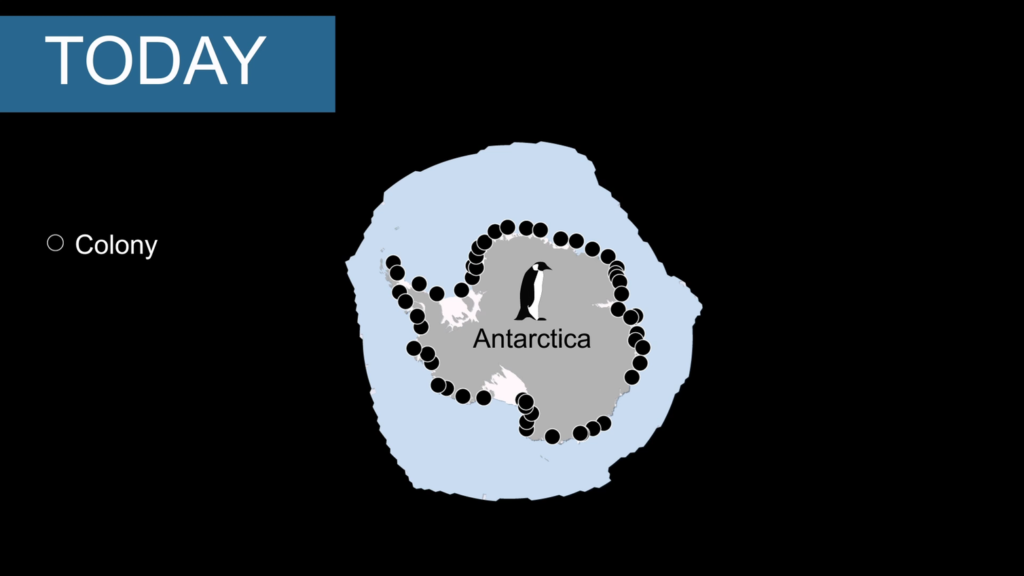 In mid-May the female lays a single egg. Throughout the winter, males keep the eggs warm while females make a long trek to open water to feed during the most unforgiving weather on Earth.

When female penguins return to their newly hatched chicks with food, the males have fasted for four months and lost almost half their weight. After the egg hatches, both parents take turns feeding and protecting their chick. In September, the adults leave their young so that they can both forage to meet their chick’s growing appetite. In December, everyone leaves the colony and returns to the ocean.

Throughout this annual cycle, the penguins rely on a sea ice “Goldilocks zone” of conditions to thrive. They need openings in the ice that provide access to the water so they can feed, but also a thick, stable platform of ice to raise their chicks.

For more than 60 years, scientists have extensively studied one Emperor Penguin colony in Antarctica, called Terre Adélie. This research has enabled us to understand how sea ice conditions affect the birds’ population dynamics. In the 1970s, for example, the population experienced a dramatic decline when several consecutive years of low sea ice cover caused widespread deaths among male penguins.

Over the past 10 years, my colleagues and I have combined what we know about these relationships between sea ice and fluctuations in penguin life histories to create a demographic model that allows us to understand how sea ice conditions affect the abundance of Emperor Penguins, and to project their numbers based on forecasts of future sea ice cover in Antarctica.

Once we confirmed that our model successfully reproduced past observed trends in Emperor Penguin populations around all Antarctica, we expanded our analysis into a species-level threat assessment.

When we used a climate model linked to our population model to project what is likely to happen to sea ice if greenhouse gas emissions continue on their present trend, we found that all 54 known Emperor Penguin colonies would be in decline by 2100, and 80% of them would be quasi-extinct. Accordingly, we estimate that the total number of Emperor Penguins will decline by 86% relative to its current size of roughly 250,000 if nations fail to reduce their carbon dioxide emissions. 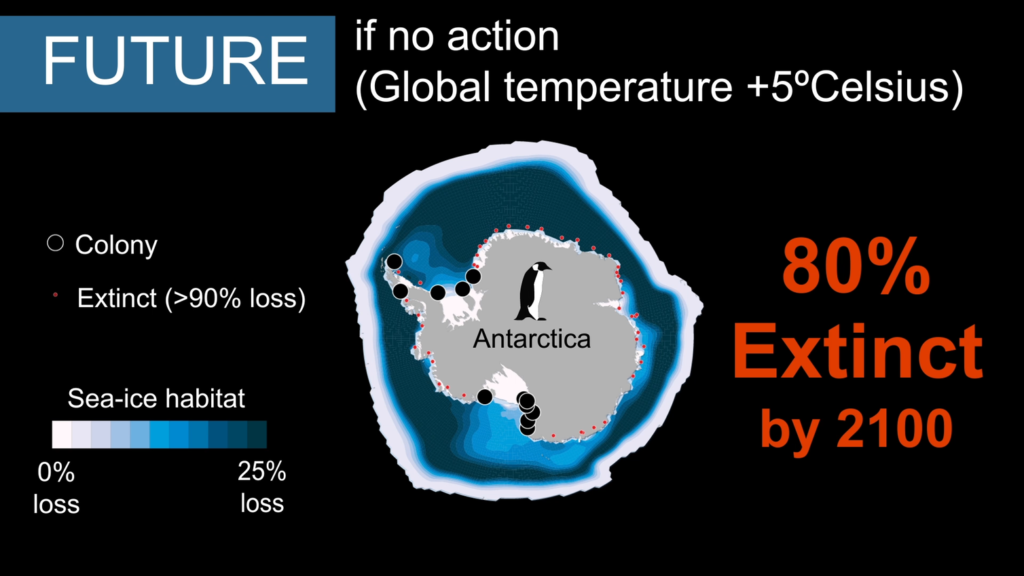 However, if the global community acts to reduce greenhouse gas emissions and succeeds in stabilizing average global temperatures at 1.5 degrees Celsius (3 degrees Faherenheit) above pre-industrial levels, we estimate that Emperor Penguin numbers would decline by 31% – still drastic, but viable.

Less-stringent cuts in greenhouse gas emissions, leading to a global temperature rise of 2°C, would result in a 44% decline.

Our model indicates that these population declines will occur predominately in the first half of this century. Nonetheless, in a scenario in which the world meets the Paris climate targets, we project that the global Emperor Penguin population would nearly stabilize by 2100, and that viable refuges would remain available to support some colonies. 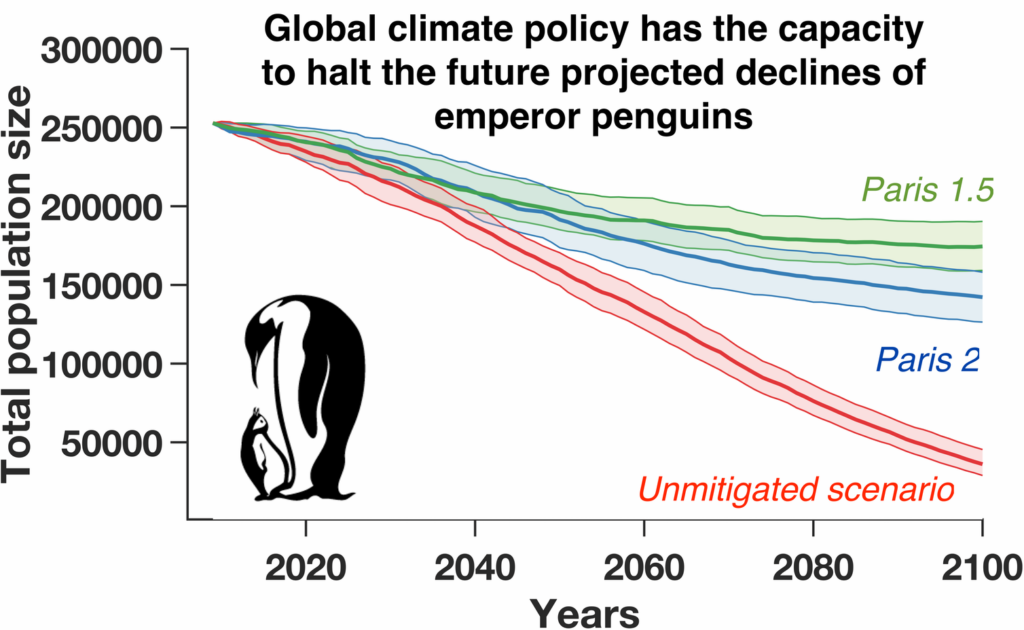 In a changing climate, individual penguins may move to new locations to find more suitable conditions. Our population model included complex dispersal processes to account for these movements. However, we find that these actions are not enough to offset climate-driven global population declines. In short, global climate policy has much more influence over the future of Emperor Penguins than the penguins’ ability to move to better habitat.

Our findings starkly illustrate the far-reaching implications of national climate policy decisions. Curbing carbon dioxide emissions has critical implications for Emperor Penguins and an untold number of other species for which science has yet to document such a plain-spoken warning.

Left: Emperor penguins are seen in Dumont d'Urville, Antarctica April 10, 2012. Today, these birds are providing a warning about the planetary effects of burning fossil fuels. Photo by REUTERS/Martin Passingham

Stephanie Jenouvrier is an associate scientist at the Woods Hole Oceanographic Institution.

Antarctic penguins have existed for 60 million years. Can they survive climate change?